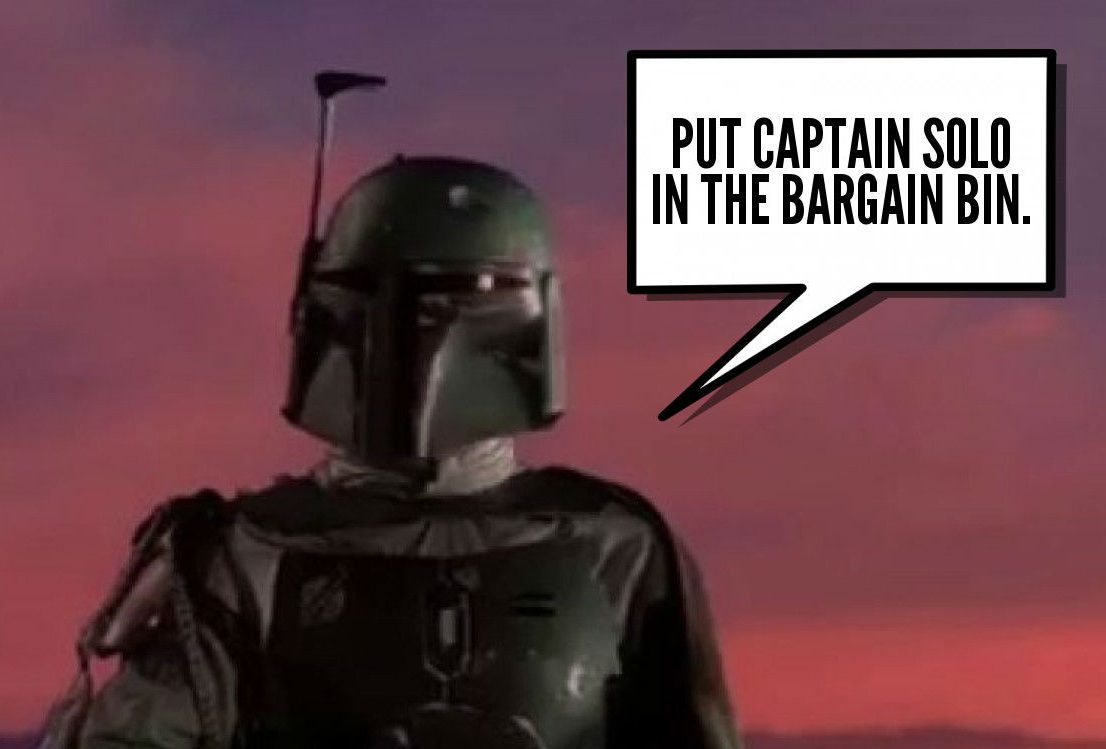 I was able to see Solo: A Star Wars Story for free.

As we were seated waiting for the trailers to begin, there was a momentary power outage that resulted in the need to reboot the theater’s computer system. Half an hour later, the movie began and afterward we received complimentary movie passes.

I myself may never know the answer to that question, but seeing a movie of questionable quality free-of-charge is always the way to go.

In the end, time was all that my wife and I spent. Thus I feel, much like the quality of the movie itself, that I broke even.

Disney, however, is looking at another wrinkle in its quarterly earnings conference call. Let’s take a look at what went wrong.

Stand By Your Han

Either way, Ron Howard, Lawrence Kasdan, and his son Jonathan have crafted an over-inflated balloon of a movie that doesn’t bust in failure nor soar triumphantly into the sky.

It just sort of melts and loses air very slowly.

The heart of the movie’s failure is a shoddy script and painfully bad editing. I was actually pleasantly surprised to find this to be the case, because in all honesty I went into this movie hating the casting of Alden Ehrenreich and I believed that he would be its sole downfall.

Also note that the Kasdans themselves aren’t completely to blame for the less-than-stellar script choices. Some, maybe much, of the blame for that lies with four people at Lucasfeminis-, er, Lucasfilm, Ltd. (LFL):

More on these clowns later in this article.

The Lord of the Rings trilogy is as damn close to movie perfection, that being Star Wars and The Empire Strikes Back, as it gets for me. I absolutely love those movies, and even more so the extended versions that debuted in a DVD box set after the theatrical release.

So I was completely mystified when the dynamic duo of Peter Jackson and Jamie Selkirk turned King Kong (2005) into such a massively boring let-down. Kong could easily lose 45 minutes to an hour of run time and be a much better movie. There’s a thrilling, thoughtful movie buried in there somewhere, amongst the endless close-up reaction shots and misguided subplots.

Likewise, Solo could stand to be trimmed down and tightened up. Every single one of the 135 minutes of run time is felt. Thank God for reclining theater seats.

No One Told Them The Odds

For example, the part of the movie intended to be the most thrilling, the infamous Kessel Run, was a test of patience for me. I looked at my wife at one point during the mess and asked, “Why are they doing this again?” She gave me a blank stare and shrugged before returning her attention to the screen, where the crew of the Falcon were attempting to upload a social-justice-droid’s brain into the navi-computer and also inject a single drop of “coaxium fuel” into the ship’s engines.

And that was after they’d just crash-landed the Falcon onto the surface of an asteroid to shake off pursuing TIE Fighters, in the style of The Fast and the Furious, before blasting off again into the miasma.

When the Kessel Run was over, I truly thought to myself, “What the fuck did I just watch?”

Composer John Powell even gets in on the fun by pirating the work of The Maestro, John Williams, for this scene. Blasphemy! The Maestro’s piece The Asteroid Field is injected here because no one else had any better ideas.

I really don’t want to compare this movie to anything, especially to illustrate how messy it is, but the jokers at LFL have invited the comparison by trampling on William’s work. Here below is the scene they attempted to recreate for Solo but failed:

I’m Only Brave When I Have To Be

Let’s talk about the script: Lawrence Kasdan understands Han Solo, while the clowns I listed above do not. I do know why those folks were able to give input and story ideas to the movie, but why Jonathan Kasdan, with his “pansexual Lando” nonsense, was included is beyond me. Nepotism, I suppose. Maybe contract negotiations.

In any case, this movie really captures a very well-defined youthful version of the character of Han Solo, and I mean that in every sense.

As we witnessed in Star Wars (A New Hope), Han Solo is a man who prefers to keep things low-key, but when the situation calls for crazy-brave action, he’s the man. See the above asteroid chase scene. Han’s first instinct was to run away into hyperspace. When that failed, he bet everything on his bravado.

Parts of the script, coupled with Alden Ehrenreich’s excellent acting, do a great job of showing step-by-step how Han came to embrace those values and when to employ them. As I said before, I was pleasantly surprised to find myself enjoying the hell out of Ehrenreich’s wide-eyed take on the character.

I likewise very much enjoyed Donald Glover’s impression of Billy Dee Williams’ as Lando Calrissian. While Ehrenreich took the character of Han back to an early stage, Glover plays Lando almost exactly the same way we first saw him in The Empire Strikes Back. Suave, unaffected, deadly smooth. Glover covers all those bases.

Last but not least, Chewbacca is finally brought to life in a way that, while exploring new motivations, truly seemed like the Wookiee I know and love from the Original Trilogy. Aside from a very strange shower scene with Han and a moment of weird jealousy over a woman (is everyfuckingbody pansexual now?!), Chewie is brought to rip-roaring life by Joonas Suotamo. While he can’t ever truly replace Peter Mayhew’s brilliance, Suotamo gets his chance to put a new look onto Chewie’s character and the results are great fun to watch.

Sorry About The Mess

If you’d have told me prior to seeing the movie that the actors playing the three main characters would be my favorite part of the whole thing, I’d have called you crazy.

Unfortunately, it also brings us closer to having to talk about the clowns that I listed earlier.

There were a few missed opportunities to inject some Star Wars feeling into the whole mess, at least from my point of view as a massive fan of the Original Trilogy. At one point, Han jumps into the co-pilot seat of a small ship piloted by a dying alien. Han should’ve said, “Switch over.” He didn’t.

But that’s a nit pick. The most glaring error in judgment is the pointless inclusion of the droid character L3-37. Aside from “her” weird set of droid social justice values, it is the circumstances of her death that bother me as a Star Wars fan.

This brings us to the first of our LFL clowns.

Supposedly, Pablo Hidalgo is the Yoda of LFL, the lore-keeper, in that as a member of the LFL Story Group he is the one that knows the ins-and-outs of the galaxy, the various systems and alien races, and overall timeline of the saga.

When the fate of droid L3-37 was conceived during the script phase, Hidalgo should’ve stepped in and altered the entire character. Perhaps I could give him the benefit of the doubt and assume that he did try, but I am assuming he didn’t. Here’s what I mean by all this.

L3-37 is a very vocal proponent of droid rights. She’s mildly amusing at first, but her constant running of her mouth gets old very quickly. This should’ve been vastly different.

During the heist on Kessel, L3 liberates nearly all the droids in servitude. In the ensuing chaos, she is shot down by a laser cannon. Lando, having been implied earlier in the movie to have had sexual contact with the droid as well as romantic feelings for her, rushes to her side and hauls part of her carcass on board the Falcon as it blasts off.

While escaping along the Kessel Run, L3’s brain is downloaded into the Falcon’s computer because she is known to possess one of the best navigational charts in the entire galaxy. The download is successful and the crew uses her knowledge to cheat death.

At this point, Hidalgo should’ve remembered C-3PO’s dialogue from The Empire Strikes Back and lobbied to change L3’s character from a social justice sex-vixen into one of comic relief.

“I don’t know where your ship learned to communicate, but it has the most peculiar dialect,” laments C-3PO, as he attempts to diagnose the Falcon’s broken hyperdrive. Since Solo is now canon, L3 is the Falcon’s brain. Her character could’ve then been changed to a droid with a peculiar dialect that was intelligible only to Lando. That would’ve established a bond between them without the strange sexual overtones.

I Am Kiri, Hear Me Roar

Let’s say that Pablo Hidalgo did try to change L3 to a more traditional comedic character. I have no doubt that he was shot down by Kiri Hart.

“As a writer I was very hungry to create female characters who felt real, and I was interested in telling stories from an outsider’s perspective.“

Supporting all this nonsense is Kathy Kennedy. She is a very experienced movie producer who was promoted far above her capabilities. That is very apparent now. She should be fired or, at the very least, demoted or made to partner with someone who gives a damn about the saga.

Near the end of Solo, a shadowy figure is contacted to file a report on the recent events. As Qi’ra (the forgettable Emilia Clarke) speaks, the shadowy figure to whom she reports is revealed to be none other than Darth Maul. As Qi’ra and Maul chat, the dark lord even summons his new double-bladed lightsaber to his hand, ignites it for all the fanboys, and swears vengeance on Han and Chewie.

But why? It’s a mediocre movie that could use some tuning up, but not an all-out turkey.

In addition to the obvious and lame title, the movie was marketed as an all-go-no-quit-big-nuts adventure movie. This isn’t the case. It’s a over-thought character study with moments of daring adventure and weird comedy. For fuck’s sake, it’s over two hours long. This is completely ridiculous. This again is an example of why Kathy Kennedy should be fired. If she can’t recognize these facts ahead of a movie’s release, she has no business being in charge.

Yes, Clint Howard has a cameo in this movie.

I couldn’t care less about future Disney Star Wars movies. And the news of James Mangold writing a Boba Fett movie only makes this all the more ridiculous. At least give us an Obi-Wan movie with Ewan McGregor.