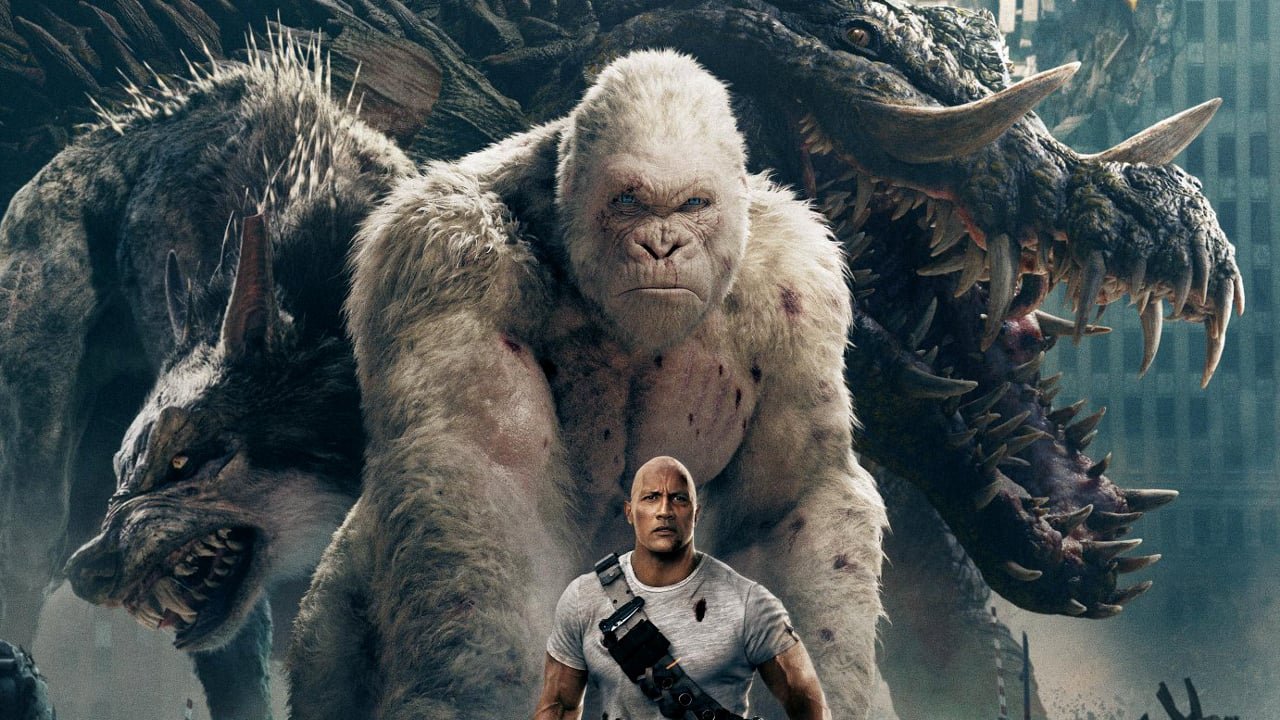 Full Disclosure : I spent a month in the Summer of 1993 playing Rampage on an arcade cabinet in an RV camp. Sure, I could have been swimming or otherwise enjoying life but wrecking buildings was just more fun. The concept of a mutant wolf, iguana, and gorilla wrecking a city was there for my formative years. This might explain a great deal about why I am the way I am.

Over twenty years later, I was a little shocked to see Hollywood scrape the very bottom of the licensing barrel, again. The bucket has been empty for a decade, but they keep going back for more. It’s not saying much, but Rampage is one of the better movies based on a video game I’ve seen.

Dwayne Johnson, who will be referred to as The Rock from here on, plays Davis Okoye. Davis is just your ordinary run-of-the-mill primatologist (they study monkeys), who also has years of experience in black ops military operations and can bench press a Volkswagon. For having most of his lines be with an albino gorilla of unusual size, The Rock brought his A-game.

Jeffrey Dean Morgan plays a government man in black. His character made the movie a lot less predictable; An agent who stops mad science from destroying the world was unexpected. By far the most quotable character in the movie, he adds an eccentric wild card to the monster movie formula.

Impressively, Rampage spends just enough time focusing on the story that I only had a handful of moments when I thought I was watching a Michael Bay film. I was impressed by the pacing between slow moments and hectic explosions. Even the climax of the movie is broken up a little and I never felt like mayhem overstayed it’s welcome.

While Rampage is full of CGI, I have to admit that the production value was there. While the digital effects were noticeable, the giant gorilla, wolf, and iguana could all be on screen at the same time and still manage to hold my suspension of disbelief.

The plot device to bring all three monsters together was a contrived mess but easily forgiven. In a more serious movie I would have been more annoyed, but then The Rock parachutes out of a transport jet as it explodes around him and all is forgiven.

Do not go into Rampage expecting the the best movie of 2018, but if you go in expecting big monsters and explosions, you will be pleasantly surprised. So far, this year Rampage is definitely the best bad movie that I have seen. I recommend it to anyone looking for a popcorn action flick. Or anyone old enough to remember playing this game and enjoying just wrecking things.

Rampage Vs The Five Bs Of Enjoyable Bad Movies

Blood : Rampage doesn’t pull any punches. Even if the antagonists were almost entirely CGI, there is still a considerable amount of violence. Expect one sided bloodbaths with angry mutated animals tearing through military and civilians alike.

Babes : This film is filled with very solid babes. There is Breanne Hill asking The Rock to show her submission techniques to set the tone. Stunning Malin Åkerman pulls off an attractive Saturday morning cartoon villain. Naomie Harris played a decent leading lady, though she was outshone by The Rock and a CGI gorilla.

Baddie : The villains could have pulled straight from a Saturday morning cartoon. They were absolutely the perfect villains for a B movie. The beautiful and ruthless Malin Åkerman, who is almost comical in her evilness, is followed around by the cowardly Jake Lacy who plays her yes-man.

Boom : Once the action starts, the explosions hit at pretty regular story beats. There are exploding helicopters, planes being ripped apart from the inside, downtown Chicago being ripped apart by an Iguana monster so mutated it barely even looks reptilian. You will not be disappointed with the boom.

Bad Acting : Rampage has some good memorable lines, delivered by well-seasoned actors, but it also has cheesy lines delivered by people really hamming it up. The villains especially were stereotypical evil businessmen. Some of the funny moments between The Rock and George the gorilla were only funny because of how lame they were, but other moments were genuinely touching.