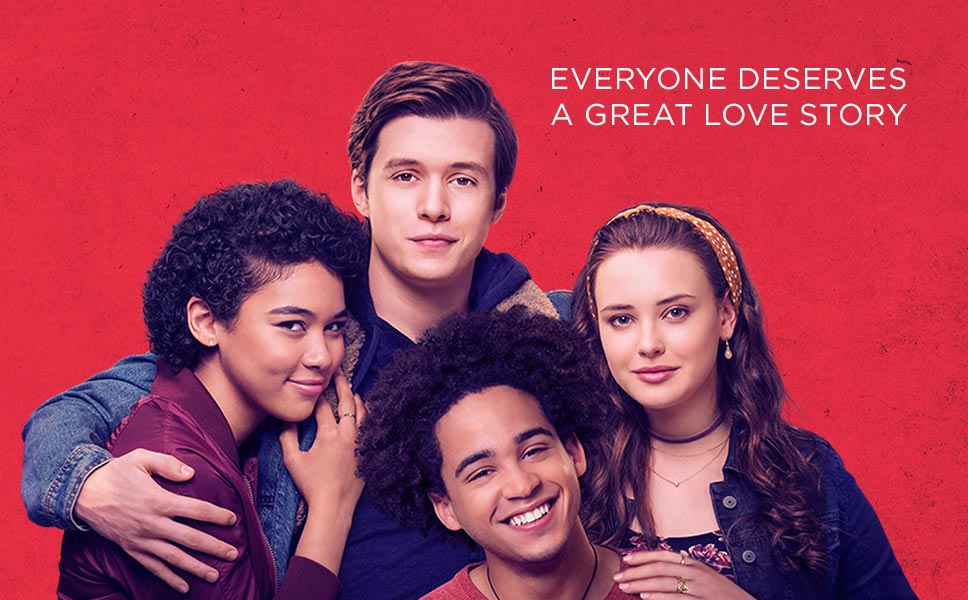 A little late to the game, but here’s my review of Love, Simon… the big, gay romantic comedy produced by a major film production company.

Everyone likes to talk about this part of the movie, that this is a bigger budget gay romcom. But in 2000, The Broken Hearts Club debuted it was the first movie of its kind to be a big gay romcom, regardless of the budget. It was 18 years before it’s time.

These two movies also are both directed by Greg Berlanti, mastermind behind the Arrow-verse on the CW and super fancy producer.

Back to Love, Simon. The movie’s basic plot is about a young man and his journey to come out in high school, and still be him. He wants what most kids/young adults want: friends, good grades, good family situation, and to meet someone. He has a great family (played by Jennifer Garner, Josh Duhamel, and Talitha Bateman- who is so good as the little sister), and awesome friends. You want to be in this friend-group.

A big part of the plot revolves around Simon emailing another closeted gay kid in school. They keep their identities a secret. Simon goes by Jacques and the other kid goes by Blue. They fall in love. Then a classmate finds those emails and (in a dick move) blackmails Simon. This caused a lot of the drama in the movie. Basically you spend a good chunk of the movie trying to figure out who Blue is.

The plot is adorable. The cinematography and how the film looks makes it look like every other romcom out there, which is good. You want a story about two gay men coming out as normal and as not as flashy because… it is a normal thing.

The cast work is good. Simon is played by Nick Robinson (who in the last couple years has been in everything. Jurassic World, a bunch of young adult movies), and he does such a good job showing Simon’s emotions and struggles. His friend group is played by Alexandra Shipp (Storm in the new X-Men movies) and 13 Reasons Why standout (and I swear clone of my friend Mary) Katherine Langford, you want to be in this friend group. Langford plays Leah’s earnest yearning in such a heartbreaking way that you ache for her.

Duhamel and Garner play the parents. Garner is always great; but Duhamel as the southern, All-American father… you feel his struggle. He loves his son, he makes jokes about his son’s swagger with the ladies, but when his son comes out you see something shift. At the end he wants his son to know no matter what he will always love him, even jokes he’ll sign up for Grindr with him (which he thinks is like gay Facebook).

Keiynan Lonsdale, Wally West on Flash, plays Bram. Logan Miller plays one of the more punchable/relatable characters in the movie. I still wanted to punch him though. Look, the cast has all-around solid acting.

One scene that caught me completely off guard is when Martin (played by Logan Miller) apologizes for outing Simon (Nick Robinson) to the whole school as an act of revenge. Simon freaks out, normally Simon is so very cool and keeps his emotions hidden (when you are the closeted gay kid in high school you do that). Then we see him lose it; yelling at Martin that he should have been in control of his coming out and it was his thing and how Martin took that away.

His big secret, one he hadn’t really understood and still needed time to process,now was for the whole world to see and he wasn’t ready. When Robinson’s performance had been so tempered and deliberate and measured; having this young boy lose it and cry and yell… you felt for him. His pain and frustration were right there.

You can still be you.

So the one thing I didn’t like about seeing the movie in the theater (two things actually) was when the big reveal on who Blue is happens, I wish I could have rewound that bit. I want to rewatch it.

It was such a beautiful moment and the actor who plays Blue (and I’ve already spoiled who it is) has such an amazing smile as it happens, I didn’t pay attention to Nick Robinson’s reaction. I feel like I need to rewatch that. My other complaint about seeing it in theaters is people need to shut up in movies. Jesus Christ, I nearly lost my composure. That’s the introvert in me, who likes quiet time.

The movie is good. The soundtrack is good. If it’s not your genre — awesome. But I think if you have kids… this is a good movie to watch.

* And I came out to my sister with pie in the colors of the bisexual flag (and then I got nervous and sang). She said everyone should come out with baked goods. So this movie and the struggle to stay you — despite everything — resonated hard.