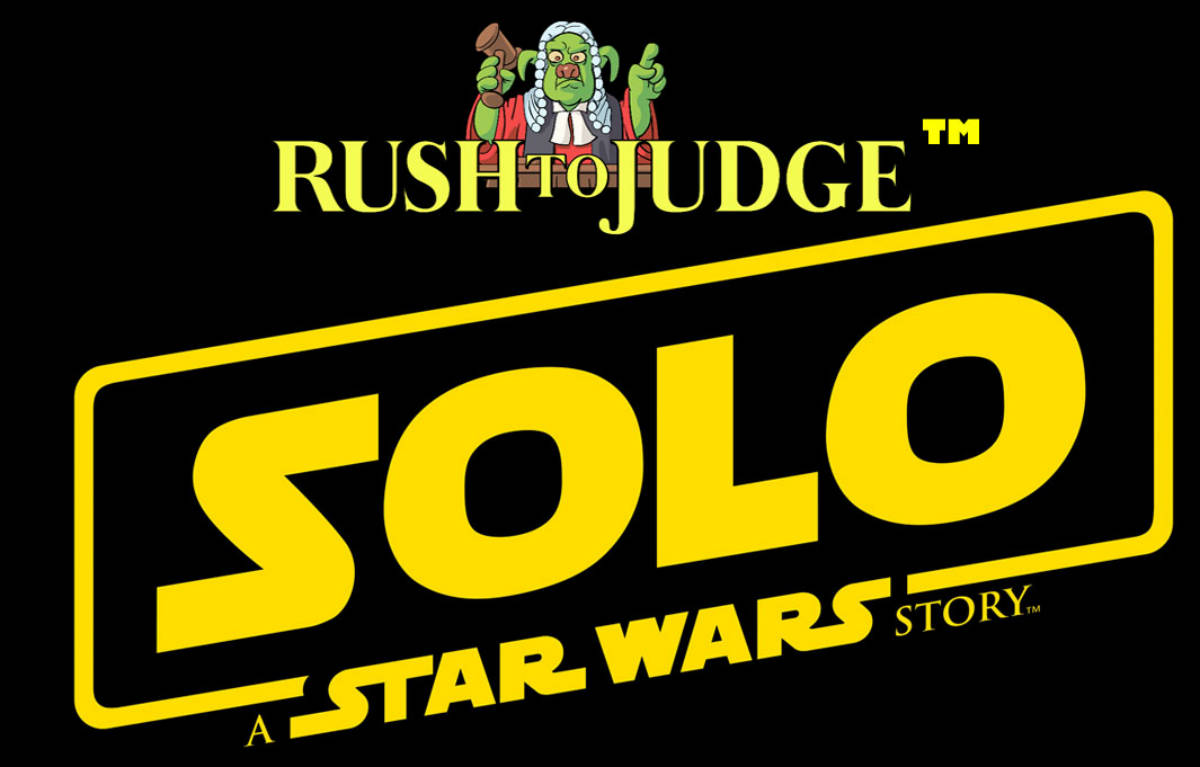 In this week’s Rush To Judge™, I sit down and share a large bitter glass of vitriol with another movie I have yet to see, probably never will, and already hate — Solo: A Star Wars Story (05/25/2018).

This film stars  , Alden Ehrenreich (Not a clue) as the famous rogue Han Solo, Donald Glover as the suave Lando, Emilia Clarke as the no doubt super-empowered, real-brains-behind-the-whole-plan female character, and Chewbacca.

Can Solo: A Star Wars Story add yet another layer of depth and some new enduring characters to this already stuffed-to-the-gills, beloved space saga? Will it possibly be a fun twist on the heist genre, starring some of our favorite familiar Star Wars faces?

Or is just a cash grab by a greedy company that has no idea how to tell a story and is instead looking to exploit one generation’s nostalgia while selling new Millenium Falcon toys to the next?

Here’s the trailer, so let’s take a look:

So with that Henry Hill-esque narration and the “Who is that dashing, devil may care driver”  crash bang, with just the hint of rock and roll, speeder chase opening, we are being introduced to Disney’s answer to a question no one has asked, “What’s a Han Solo?”

Who is this movie even for?

Why did Disney make this?

Well, to start the film certainly looks dank. Dank, grimy and wet and maybe a bit down and dirty, just like Han and the 100% guaranteed cast of “Diverse” outsiders who will join him on this mission to steal something that is most likely of great importance to the Empire.

The trick of using drab, flat colors is threefold.

Secondly, it is to help us, the idiot audience, into placing this film in its proper place in the Star Wars timeline (one of the prequels most shiny flaws). Incidentally, if you are really stupid:

Last but not least, is its used to offset the image contrast from the massive amounts of CGI being plastered onscreen.

Short opinion here: I think that CGI is allowing directors and effects people who grew up playing with Star Wars toys to enact their fantasies on screen, to shoot space battles and film spaceships with angles and perspectives their 10-year-old selves only dreamed of. That was the only thing that stood out to me with Rogue One.

It is a fantasy all Star Wars fans have, but there is a problem: All these CGI effects carry no weight, no mass. The practical effects of the first three movies looked real because they were actual objects existing in our space/time. It’s obvious these computer animations don’t exist even with the suspension of disbelief. They just look like video games. It’s gotten to the point that watching these movies is like watching someone else play a video game… which is the tenth level of hell for me.

Back to the Trailer

It appears that Disney, instead of wanting to tell stories about the journeys of heroes and the rise and redemption of their foes, would rather invest their energies into creating a large catalog of run-of-the-mill story templates, which can then used to plug various, and lucrative Star Wars characters into.

Since they are making these movies backward, we know Han is dead and Woody Harrelson didn’t have an action figure 5 years ago, it is kind of their only option. A gentle reboot with just enough fan service and plot sleight of hand, so the public will swallow it down. It appears that the marketing team is already hard at work spewing their spiel:

So it looks as if Solo: A Star Wars Story is aiming to be the edgy, funny heist flick, but with its finger ever sooo lightly on the pulse of today’s politics. You see, Han wasn’t always a self-involved scoundrel. He was just a wild and aimless kid, who never knew his father (probably a pilot, for the Empire).

Through the holy act of witnessing the courage of some downtrodden and oppressed female aliens in the face of the big, bad Empire, he is transformed into a progressive freedom fighter who finally learns to stand for something.

However, come the third act, when he is forced to make a choice between running away or saving his new friends by taking the fall for something, Han resigns himself to the fact that he is just a no-good smuggler and takes the easy way out.

The End. Or not. I don’t really care.

Let’s not forget that since this is going to be ten minutes of plot dressed up in 150 minutes of nostalgic in-jokes and special effects, it had better look and sound cool.  With cool robots, cool spaceships, cool dialogue, cool new weapons. Not to mention, ooh look at that cool design of that new bad guy’s mask. Don’t make it too cool though, make sure it looks and sounds familiar too… make sure you add 25% A New Hope here and put in about 10% Empire Strikes Back there… make sure you color within the lines. Make sure we don’t lose money.

Make sure you do what we say or you will be replaced with Ron Howard.

I’m just guessing here, but I think the ending involves Han getting into a massive crash and having extensive reconstructive surgery that changes his face, voice, height and overall demeanor and manner to that of Harrison Ford.

Here’s The Thing For Me

I went to see The Phantom Menace in the theater when it came out.

I wouldn’t say I was all fanboy giddy, but it was STAR WARS and those two words generate a Pavlovian response in all of us. Besides, who wasn’t interested to see how this part of the saga would unfold and tie together with the original trilogy.

Well, I had the same reaction as most people at the time — WTF did I just watch?

There was something else, however… something silent and vague, slowly coalescing and waking up. The stirrings of a thought, a conviction. Something that finally matured and was born witness to by The Force Awakens. I don’t love Star Wars. Maybe we are friends, barely.

Disney, in choosing to greedily mass produce countless tales of dysfunctional Skywalkers and their various droids, bounty hunters and super weapons, have only succeeded in eroding away any impact that Star Wars had made on me. All the cartoons and comics, video games and special editions of Monopoly, they only diminish the the power this saga once possessed.

You see, the more Star Wars became worth as a commodity the less worth it held for me as a story.

Look, I enjoy the original three movies. There is no denying ANH and ESB are classics. I still love when Luke confronts Vader and The Emperor in Return of Jedi. The prequels are pretty much dogshit. It’s just, anytime I have tried to watch or read or play anything Star Wars related since 1983, it only reinforced the fact that I do not care.

The magic is gone for me.

A long time ago in a galaxy far, far away, we all asked “what was it that drove Anakin Skywalker to the Dark Side?” and man, are we ever sorry we did. It seems Disney is trying to not make the same mistake again and will make sure Solo: A Star Wars Story checks all the right boxes (A female droid???..How groundbreaking!). But deep down in our broken fanboy hearts, we all know this is going to be garbage.

This movie should really be called Solo: A Disney Product. Because it is just about money. There is no story worth a damn worth telling here. Harrison Ford was Han Solo and he did stuff with Luke. END OF STORY.

Every one of us caught the glaringly obvious metaphor in The Last Jedi when Luke was milking that space cow. In order to continue its unholy entertainment dominance, Disney is going to milk this franchise for every last drop of blue milk money they can.  But if Solo: A Star Wars Story shows me anything, it is that those teats are getting raw and starting to run dry. 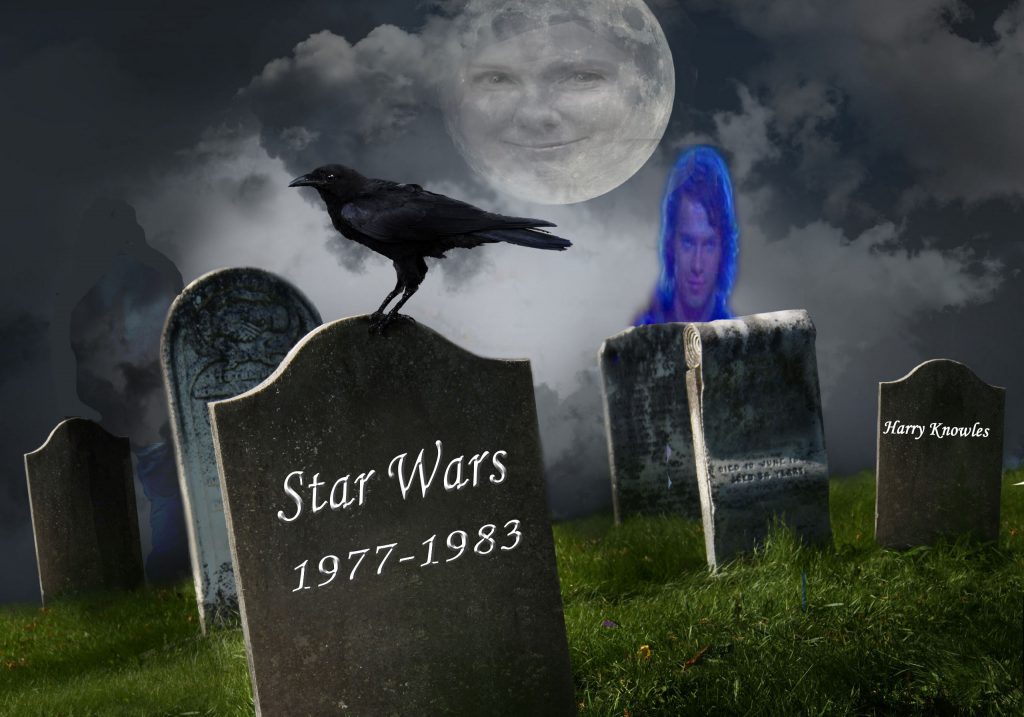