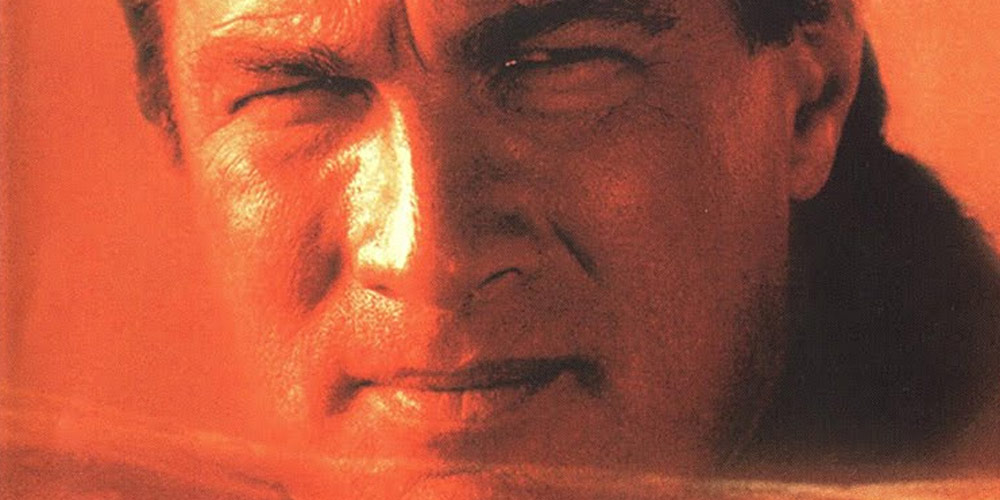 We are now cruising through South Central Turd City.

Seagal’s career has totally stalled in the last half of the 90s and he’s doing a lot of weird “eco-thriller” films.

Only a single real Seagal film is reviewed here.

We can get through this.

Saturday Seagal 5 next week will return to greatness and have three true Seagal flicks and enters the excellent direct-to-DVD era of his career. 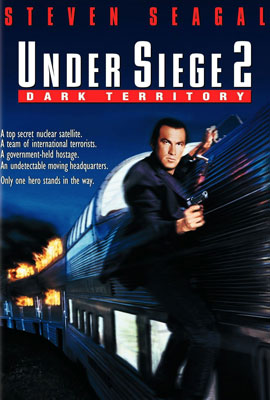 After his brother passes away, he must escort his niece by train to Los Angeles.

But soon mercenaries take over the train and Ryback is Under Siege 2 (again).

I had to get this done while traveling through the filthy and immoral land known as Southern California. I write to you now from under a freeway overpass while eating a $1.09 Red Burrito (extra sauce) from Del Taco.

I don’t even own this movie, I had to rent it from YouTube just to do the write-up:

These are the things I do to bring you premium and hard-hitting Seagal reviews. I am going to keep reviewing Seagal movies no matter what it takes.

Early in Dark Territory, Seagal makes some mistakes. He brings the wrong gift for his niece — she is too old for teddy bears. He talks bad about her deceased father, and she gets mad.

Then he provokes the mercenaries to shoot up the galley and runs away as the cooking staff is murdered.

This is all after he tries to bake a cake in the microwave.

I need to take a step back here and explain a little bit of the story, which is a mess. I am not that critical of realism in movies, that attitude is annoying. The more a movie can take me out of real-life, the better.

But this movie invents every story element simply so the entire thing can take place on a train.

So two US intelligence officers are involved romantically and take a vacation on a train. I guess because no one rides in trains and they won’t be spotted.

Okay, I get that.

They each know half of the code to turn on the space laser, so that is why the train gets hijacked. So the bad guys have some justification to hijack the train.

Where it gets convoluted is why Steven Seagal is on the train and why the movie doesn’t ever leave the train.

The movie says his brother and parents died in a plane crash, so he doesn’t fly. He was a Navy SEAL though. I think those guys travel by airplane a lot and they jump out of airplanes too.

I guess I can give that a pass, I don’t actually know if SEALs have to fly or can just take a train everywhere. I only know what the History Channel shows me.

Then after the bad guys use the space laser, more train justification happens. I guess as long as the train is moving they can’t be tracked? Its really just more nonsense to keep this movie on a train at all costs.

Under Siege 2 has a really funny bad guy.

He’s the best part of the movie.

His entire motive is that he thinks he is smarter than anyone else, and most of the time he’s just putting others down.

My favorite line? It’s gotta be this:

“Yeah I’m gonna shock the world by spreading kaka all over the place!”

Besides that, the movie doesn’t have a ton going for it on the surface, but the cheese and action keep things moving well.

The action isn’t as brutal as I would have liked, but there are some creative kills.

Seagal sets 3 guys on fire, then throws someone under a train and we see a dummy get squashed.

The problem is that a Seagal academic can easily tell things have been toned down.

While there are some creative kills they have a kind of… festive tone? I don’t know if they thought they had to do this for better mass appeal?

Though the action is definitely better than the first Under Siege. It’s overall a better movie, too.

I fought with this one while watching it. During the first half, I was groaning at the cheese and shittiness but I still have to give some credit to the director because the movie is tonally consistent and has some really fun action.

It’s terrible in all best 90s ways. It might be the best movie I have reviewed so far, just not the best Seagal movie.

Yes, it’s a great movie to watch on a phone from inside a homeless tent.

Yes, and I love train movies now. I got Orient Express and Snowpiercer queued up. 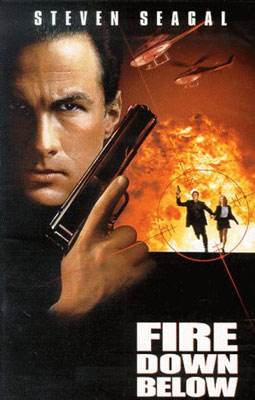 Steven Seagal is Jack Taggert, and EPA agent sent to Kentucky to investigate the mysterious death of his partner.

He is then harassed by dirty cops and mercenaries, but Jack will fight to protect the environment.

I could tell something was very wrong with this movie in the first 30 seconds. It starts with a series of flashbacks that were clearly shot as real scenes.

Obviously they had to cut a lot for running time or pacing issues. It was giving off a strong TV-movie vibe.

Then we randomly open to Seagal cutting some wood in front of a house. The family comes out and it’s not his house. He is working undercover for the local pastor as a volunteer carpenter.

Whoa, the first 20 minutes of this movie are insanely confusing.

And then all is redeemed:

Actually, nothing is redeemed. This movie is boring and cringy as hell. Everyone is an annoying hillbilly. I like hillbillies fine, but they reference Deliverance and its just bad one-dimensional characters.

“Complaining about complex characters in a Seagal flick, really?” you might ask.

Let me explain this to you: Fire Down Below is one of Seagal’s attempts at drama. I must have paused the movie fifty times and was surprised at how much movie I still had left to watch.

This movie is just an episode of Walker Texas Ranger that lasts for 100 minutes.

The tone, the budget, the acting — they just swapped Seagal for Norris.

One of my biggest grievances is this scene where he wrecks the cops. At this point, he hasn’t killed anyone yet, and I am thinking that this was finally it.

I sat up straight in my chair — this movie was about to get better. What could make me happier than Seagal slaying some cops? These are dirty cops too.

But he doesn’t kill any of them. In any other movie, there would be 6 dead cops in the street.

Worse, the action looks like it’s straight from a Taken movie. We are so far away from the brutal barroom brawls seen earlier in his career, it’s all quick-cuts and slow-mo.

Overall Fire Down Below is a boring mess.

It’s got way too much story during the first hour and then crams in a ton of regular Seagal action in the last bit. I wonder if this was done during some kind of reshoots.

I couldn’t find a ton of information about that, but I did find a pretty cool old interview with Letterman though:

If you insist on continuing your research I can recommend the last 30 minutes, but only to the most prestigious Seagal academics. 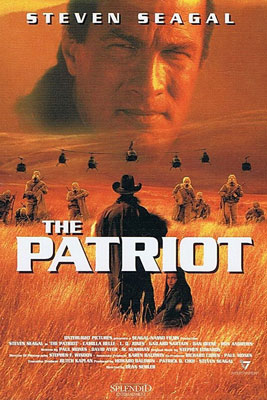 Steven Seagal is Wesley McClaren, an immunologist working as a small-town doctor in Montana.

When a radical anti-government group releases a biological weapon on the local populace, Seagal must find the cure and prove who is The Patriot.

I think we have a problem, fellas. I have been watching Seagal flicks exclusively for the past few weeks and either my standards have been destroyed or this movie is actually okay.

It only has two Seagal action scenes. He only kills maybe 4-5 people. That was only when he and his daughter were kidnapped.

I think this was a passion project for him, it has a lot of preaching about the environment and the dangers of weaponized disease.

I have said this before in the On Deadly Ground review, that stuff doesn’t trigger me if it’s earnest and true. I am a sucker for people being passionate about something even if I think it’s dumb. Just don’t be boring.

While researching some of this baloney I found some interesting things, too.

Honey is an effective antibiotic/antimicrobial against E. Coli, Salmonella, Staph, and other bad stuff. Some of this granola stuff actually works!

Seagal’s character in The Patriot has got to be the smartest man alive.

He is so talented and humble.

He accepts home-baked goods as payment for medical care.

He is respected by the local Native American shaman.

He is a martial arts and pistol expert.

He helps and is loved by everyone in town.

Indian babes are thirsty for his puffy shirts and style.

They even got the requisite scene where some random government administrator and general and arguing about how they need him back in the game because “He is the only one who can stop this, there is no backup plan.”

If you are a constitutional right-winger, you will appreciate The Patriot. The terrorist group is portrayed as misled guys rather than inbred retards. They are dangerous, but only the ones that have murdered get on-screen deaths.

In another movie, anyone associated with the right at all would be worthy of a complete massacre. Seagal even says something like:

“I think the ideology of some of them is good, but Floyd [their leader] is just an asshole.”

Pretty impressive that Seagal let that dialogue happen when he was clearly a Care Bear leftist at this point.

Don’t think that this movie is winning me over by pandering. It’s a standard disease outbreak thriller.

I don’t know what that genre is actually called. Outbreak, Andromeda Strain, Contagion, you know what I mean.

The setting is interesting and Seagal’s character is ridiculous.

I give this movie a recommend for a lonely Saturday night. Sadly no one on Film Goblin has any of those, so you won’t ever get to watch it.

Oh yeah, and the cure for the outbreak turns out to be traditional Native American tea.

You have been warned.

This is “extra credit” for Seagal academics.

I thought it was fine.

Thank you for your time.