I am loosely following a few user-created “best to worst” lists on IMDB.

At the end of each I will answer 3 questions:

I’m not going to get philosophical and define good or enjoy, it doesn’t matter.

Besides that, I will also keep a cross-post persistent list of the top 5 Steven Seagal movies. New movies can knock others from the list. Obviously there will still be 2 empty spots in this first post, for all you mathematicians out there. This has already taken too long to get started, take my hand and let’s go together: 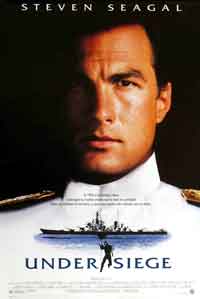 Steven Seagal is Casey Ryback, a disgraced Navy SEAL forced to finish his last years of service as a cook on the USS Missouri. When the battleship and its nukes are put Under Siege by terrorists, the cook must put his meat back on the grill to save the world.

That sounds like a great premise! I am fooling myself reading it now. No, this movie is not good. Yet on every Steven Seagal ranked movies list I read, this is #1.

It’s definitely his biggest movie, he was almost A-list after this came out.

Get this — it was even nominated for an Oscar.

Too bad he managed to spit salt and even biff the joke they wrote for him:

This movie itself is a low-effort Die Hard clone, and that’s all it has going for it.

It has zero standout action scenes, zero comedy or zingers, and zero charisma.

I will defend Steven Seagal’s likability in other movies, but he needs his pony tail.

There is no ponytail in Under Siege.

My big problem is that the actions scenes are 90s garbage, a total lost opportunity with his skill-set. Lots of pew-pew machine guns and sparks flying off the walls. There is a sweet dual-wield sequence though:

That’s not why you watch these movies though.

Steven Seagal needs to stab people. He needs to break their arms and be brutal. That’s his brand. I should feel sorry for the bad guys.

Instead, I feel sorry for myself and finding wondering how bad things can get.

Tommy Lee Jones is here, one year before he would prove how wrong the feds often are in The Fugitive.

I am so baffled at this character here. He’s the terrorist leader and an ex-military hippie/rocker/anarchist?

Or was the rocker angle part of his cover to get on the ship during the party? But then he continues to act like a hippie even after he reveals himself as one of the terrorists. 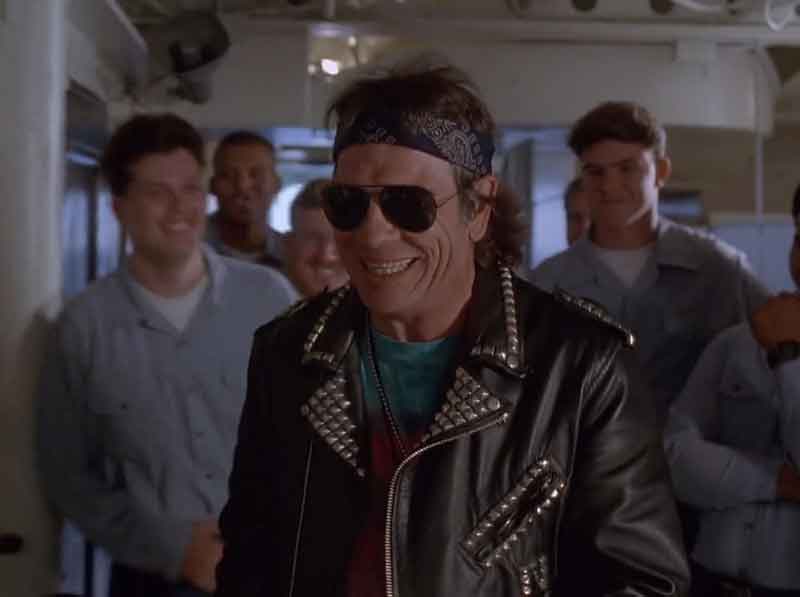 Gary Busey is welcome as always, playing the traitor XO who betrays his own captain and sells out to the terrorists… and even finds an excuse to dress as a woman. I don’t remember how he dies or really anything else about his character though. 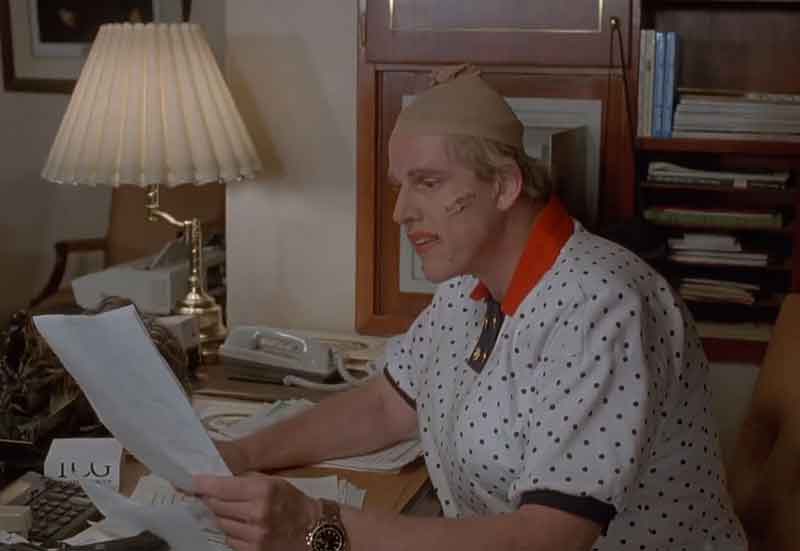 This movie is disappointing, I don’t understand why it sits at the top of his catalog. Things need to get better soon or this is going to be a painful review series.

Yes, it’s his best-known film. Then you can tell people how wrong that is.

Besides Gary Busey and 2.5 acceptable actions scenes, no. 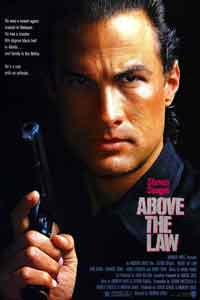 Steven Seagal is Nico Tuscani, former special forces operative and the ultimate weeaboo. Now a Chicago vice detective, he discovers a plot to assassinate a US Senator and military explosives that point to someone in his past. But when his badge is taken away and his family is threatened, Nico must go Above The Law and break some arms.

I was entertained every minute of this movie. Its Steven Seagal’s first starring role, and he is trying really hard. You will see him put in a believable performance in several drama scenes! And he is really likable here, there is some good cop banter too.

He’s doing a ton of his own stunts — that’s actually him on top of the car during that chase — and his martial arts demonstrations contain raw brutality. You will cringe during a few of the fight scenes. You will want to be Nico by the end of Above The Law.

Let me give you a little taste:

This movie’s problems come in the form of cliches:

It was done already by Dirty Harry but who else? Let me know.

This movie might be good, good-bad, a nostalgia-high, or just plain dated.

It doesn’t matter, it oozes charm from his greasy head.

I unconditionally give a hard recommend for Above The Law. Go watch it.

Absolutely. From beginning to end. 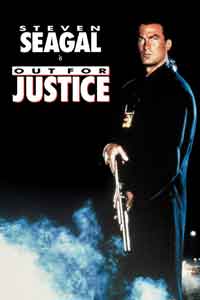 When a Brooklyn thug goes on a drug-fueled rampage, both the mob and the cops want to take him out. Given a shotgun and an unmarked police car, Detective Gino Felino is Out For Justice.

Italians that are named Gino Felino. That’s what we are dealing with here. Out For Justice is dripping in vaseline and marinara sauce.

I think his accent is good? I dunno, it’s believable to me.

However, there is zero explanation for his karate skills. None. He can just beat anyone up, so that makes him a superhero. I am okay with that.

John Wick is a superhero and no one cares.

People more familiar with the Seagal Cinematic Universe will know that this is the one with the cue-ball-in-a-towel beatdown. I won’t spoil that here with a clip, but it’s pretty brutal even by today’s standards.

Unfortunately later in the pool fight, we are insulted by whatever this is supposed to be:

I have had more exciting broomstick fights with my brother in the backyard.

Well, that is probably because of the rapists that used to hide on our property.

Classic Seagal mug in that shot though. Love that.

The problem here is that this is basically a crappier version of Above The Law… but made 3 years later. So we are witnessing some regression there.

We will be analyzing a lot more bar fights before I get through his catalog. Bar fights are in his standard contract.

They had some problems with the script or something, the story is so simple but it’s over 2 hours long. At one point they run a montage over several scenes that clearly had real dialogue.

I am gonna guess that this was supposed to be more of a thriller/crime drama, but it got turned into a full Seagal flick at some point.

But this is still Steven Seagal in full force.

All of the tropes and brutality are present. For a Seagal flick to be successful there has to be confident gunplay. That is one of his strengths, is he a proto-John Wick? Or is Keanu just actually Seagal a few decades removed?

Wow. He just murdered 4 men and then blew that guy’s leg off.

This is premium Seagal.

This is what my life needs. It should look like a heroic snuff film. I should feel pity for the bad guys and scream at my monitor:

Get through the first half — heck, just skip to the last hour.

I am assigning you Out For Justice for your Seagal homework.

If you are a Steven Seagal academic or are trying to impress a lady who is a fan, you should watch this movie. Its required canon.

Thank you for your time.