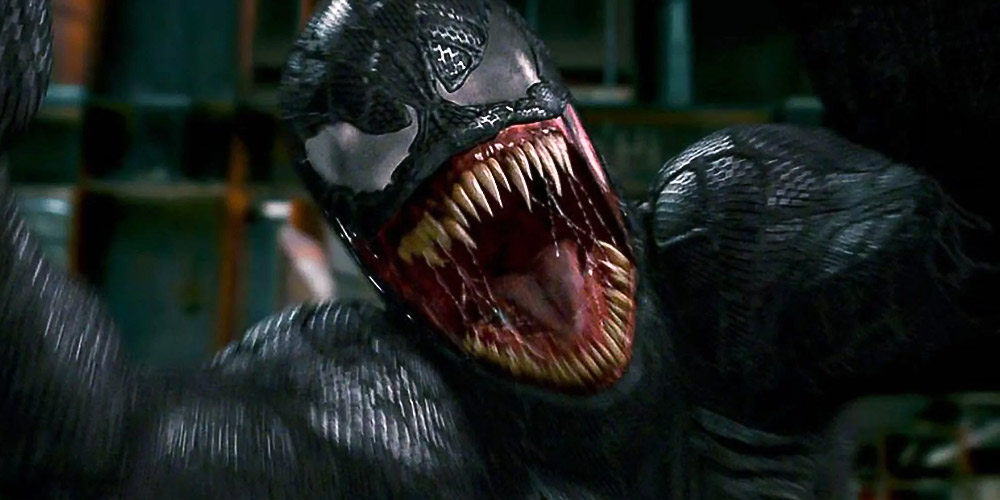 Reigning Fire On The Raimiverse, Part 3

So I bet you’re thinking that I’m just going to slaver and spaz about how much I hated Sam Raimi’s Spider-Man 3.

And no, I’m not going to be contrary and defend it, it does indeed suck ass, by far the worst of the three movies.

But my premise is this:

How can one complain about a hot dog vendor sticking a dead rat in between a bun and calling it a “hot dog” when just last week everyone was raving about the vendor’s other specialties slathered in rat crap.

My point being, the seeds to this travesty were in the other movies.

All the critics and fans raved about Spider-Man 2 and so Sam Raimi’s inflated ego took over, his dark side if you will, and he vomited this bullshit at the screen.

A lazy effort by a bored and lazy Hollywood guy who was getting sucked off by fans for his other horribly lazy efforts. What else does he need to do?

But then suddenly, inexplicably, the fans noticed.

People hate Venom for being shoehorned into the film. Was his presence any more pointless than the Green Goblin’s or Doc Ock’s?

Doc Ock was good at heart, so was the Uncle Ben-murdering Sandman.

Sandman’s and Venom’s origins in the film are nothing but hackneyed and convenient.

As were the origins in the first Spider-Man movie.

Raimi was given a free pass to be as implausible as he wanted.

No one cared the first time. Or the second time.

Why would they sit up and take offense at the Sandman’s hilariously underwritten origin?

But then again, so was Peter turning his back on the muggers and being carried by the Subway passengers in 2.

Though special mention should be made of Pete/Tobey Maguire crying through the entire movie. That was unbearable, for sure.

MJ screaming and shrieking like a ninny at the end after acting like a vapid, two-timing whore.

How was her character any less irritating in 2 where she reveals that she knew Peter was Spidey all along and yet had to mind-fuck and test him about how much he loved her.

%@!* her and barely present Kirsten Dunst!

Everyone complained about his butler’s revelation, which was a hoot, for sure.

But consider that Harry by the end of part 2 — at the very latest — should realize that his father kidnapped Mary Jane and tried to kill Aunt May and was overall a screwed-up sonofabitch and yet Harry has the gall to act like Peter is his arch-enemy.

That’s before his memory gets wiped clean, in what was, I have to admit, a pretty decent fight scene.

It was the kind of scene I wanted for the first movie but this time Pete is out of costume so it almost doesn’t count as Spidey action.

The premise of it wasn’t very well thought out, however.

But you know what was most unforgivable for me about Spider-Man 3?

Like Spider-Man needed his dumb ass to save the day.

Venom Is Villain For Dummies

Finally, I do need to address the Venom question.

I’m on the same page with him there.

I hated Venom’s comic origin. Eddie Brock came completely out of left field, at a time when writers like Roger Stern were setting a high bar for villains and their backstories.

Eddie Brock was totally under-motivated as a guy with an ax to grind.

What did Spidey do?

Wow! A reporter had to retract a story! He’s ruined!

Actually, if Eddie Brock was created today he would work perfectly.

Even without a plausible reason for revenge, Venom’s origin is hilariously convoluted; even by Marvel standards, which means outrageously convoluted!

“Basically, the symbiote suit came from the Secret Wars when Spider-Man was in outer space in a battle with all the Marvel Heroes against all the Marvel Super-Villains on a place called BATTLEWORLD!

Well, then Spidey got his costume torn to shreds in one of the many and endless fights. So he finds a machine that gives him the choice to make an advanced costume that looks like Spider-Woman’s costume and he brings it back to earth and only later finds out its an alien feeding off of his body and soul.

So first he goes to Reed Richards who tells him that it’s a symbiote and Richards traps it by using sonic weapons against it.

But it gets out of its glass cage and the suit and Peter face off in a church and Pete gets rid of it because high pitched sonics are the symbiote’s weaknesses and apparently church bells are good enough.

Oh, and fire too!

Then Eddie Brock is going to kill himself because his story turned out to be false and so he went to church to look for a reason to live and because he’s Catholic he can’t kill himself, but then again has no problem killing anyone once he becomes Venom — as long as they’re innocent.

And the suit is still alive and it bonds with Eddie because the suit recognizes that Eddie hates Spider-Man.”

My Question Has Always Been:

“Wouldn’t the suit recognize that Eddie should just hate himself for being a lazy, bandwagon jumping hack asshole and not really the one to bond with for any deep understanding of Peter/Spidey?”

Or was the symbiote prophetic and sympathetic to the Chris Matthews/Cenk Uygur style of journalism?

I hate the tongue, I hate the “MMM. Brains! Won’t Kill an Innocent!” nonsense.

If I’m getting $10 or $20 million to write and direct a Spider-Man movie and the powers-that-be give me the edict “Put Venom in the movie or else,” I’d have at least dropped Sandman or made him a James Bond pre-opening credits style one-off, taken the crappy source material, figured out what was good about it — yin and yang, dark side of Spider-Man, etc — and made an earnest attempt to write a movie about Eddie Brock and Peter’s rivalry.

And at least add closure to John Jameson’s character by having him bring the symbiote to earth from one of his space missions, as was the case in the supremely faithful-to-the comics and entertaining Spectacular Spider-Man cartoon series.

To have the symbiote just plop onto the ground from outer space mere feet from Peter and MJ was the height of Hollywood coke-and-whore-fuelled ego and indolence.

If Raimi did it under protest, he’s really a dick — especially if he cashed Sony’s $20 million dollars in residuals.

That’s all I have to say on the matter.

Still, it’s the first film that hurt the most. With the other two, I don’t blame Raimi.

I blame the American public.