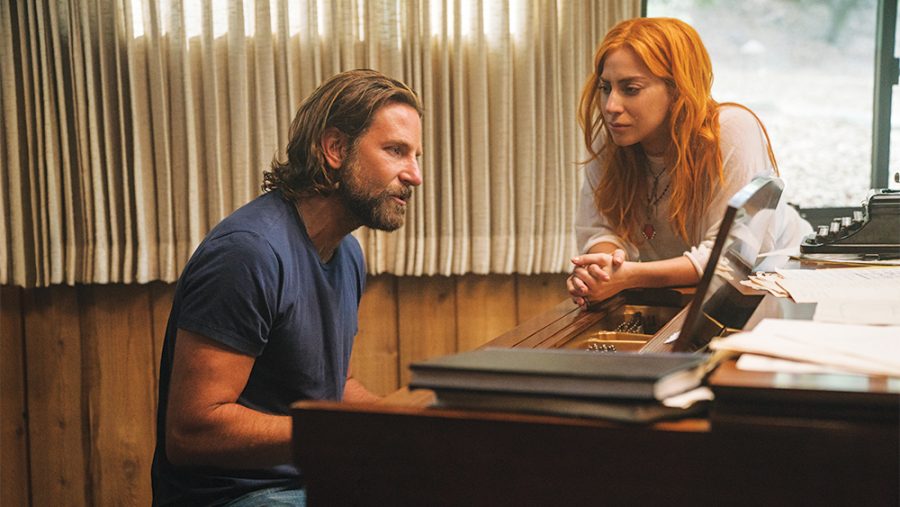 I really liked A Star is Born.  Bradley Cooper kind of pulled a Ben Affleck here and proved rather unexpectedly that he knows how to direct a major motion picture.

And Lady Gaga proved that SHE CAN ACT.

The only other role I’ve caught her in was Sin City: A Dame to Kill For.  It was a bit part and didn’t really tell me much but she did a fine job.

Well here she finally gets a starring role, and for me, a star really was born.

She might be a star in the pop-music scene, but guys like me don’t listen to that stuff.  But still I’ve always noticed a certain creativity to her melodies (she writes her own music) and now I see those referential costume displays at awards shows and the like as a sort of mockery of the system.

Not quite Freddy Got Fingered mockery, but more just a way for her to exude some control over her existence while being pushed to turn her clever piano melodies into poppy dance music.

She says as much in the fantastic documentary Gaga: Five Foot Two.  So, in reality, I think she’s actually more of a Lorde/Amy Winehouse/Fiona Apple than a Britany Spears.

There is a certain power behind this woman, and it just seems to pour out of her. She’s fucking badass.

I don’t usually do reviews so I am going to try and keep it simple.

A Star Is Born

Everything sounded great in this film and looked even better.  Some credit has to go to Matthew Libatique’s cinematography and Jay Cassidy’s editing, but all the gushing about Bradley Cooper’s direction has not been overstated.  He actually has a style.  I’m not sure what to compare it to but somehow we do feel carried through every scene… or at least dragged down a Slip-N-Slide.

The cast, led by Cooper and Gaga is fantastic.

I knew from the trailer that I would get Dave Chappelle in some kind of cameo, but it was an extended one.  I am sure that his recent stand-up specials on Netflix had something to do with the casting.  This new “wise” version of Dave Chappelle was welcome there, and it works here in his biggest scene.  He basically has a monologue that speaks from experience, then ends with a hilarious punchline.  It’s the biggest laugh in the film and is note-perfect.

Sam Elliot took me by surprise.  This guy could easily get an Oscar nod for his supporting role as Jackson Maine’s (Cooper) manager and much older brother.  The way he was introduced was very clever.  We hear Jackson talk about his older brother early on in the film, but the character exists only as his manager for the first couple scenes he’s in.  The brother part doesn’t become apparent until later.  In fact, we learn about him at about the same pace as we learn about Ally (Gaga).

Ally is a breakout role for Lady Gaga and she crushes it.  I can’t say enough about how great her range is in this.  She’s the real deal.

Ally’s father is played by Andrew Dice Clay, in what is allegedly his final acting role ?, provides a little comic relief but not in the way one might expect.  He’s a warm character and the laughs come from that warmth.  His friends are fun as well and filled out with familiar character actors you’ll be happy to see.

The first half of the film is the best, but once the conflict hits, things get a little bit choppy.

I don’t know who the guy playing her new manager is but he is fun to hate.  This is the first time I have ever heard a person with a New Zealand accent that didn’t sound goofy but I still just wanted to punch him in the face.  He’s a classic stereotypical scumbag record producer.

I don’t want to spoil anything from that point on so I just deleted 3 paragraphs.

Overall I found the movie to be emotionally believable and at times beautiful.

Some have criticized that Lady Gaga was channeling the original actress from 1954’s A Star Is Born, Judy Garland.

I’m not sure if that’s a compliment or what but if you know anything of Gaga (aka Stefani Joanne Angelina) or watched her Netflix documentary, you know that the character she played is not unlike what she has experienced in her own life with the media and music industry. She rocked it. And maybe that’s why she plays the role so beautifully or maybe its because she’s a very relatable human being.

Even though this is a remake of three earlier versions of the film — 1937, 1954 and 1976 — the movie was true to its time in not only who starred and directed the film but the myriad of cameos throughout. Even Greg Grunberg shows up!

Another thing to note: Cooper and Gaga are playing all their own instruments in the film and those are their voices too!  Apparently, Cooper worked on special tech to capture everything live so nothing would have to be done in ADR and it sounds GREAT.

There is not much to criticize about this film, however, I do suggest you bring a date.