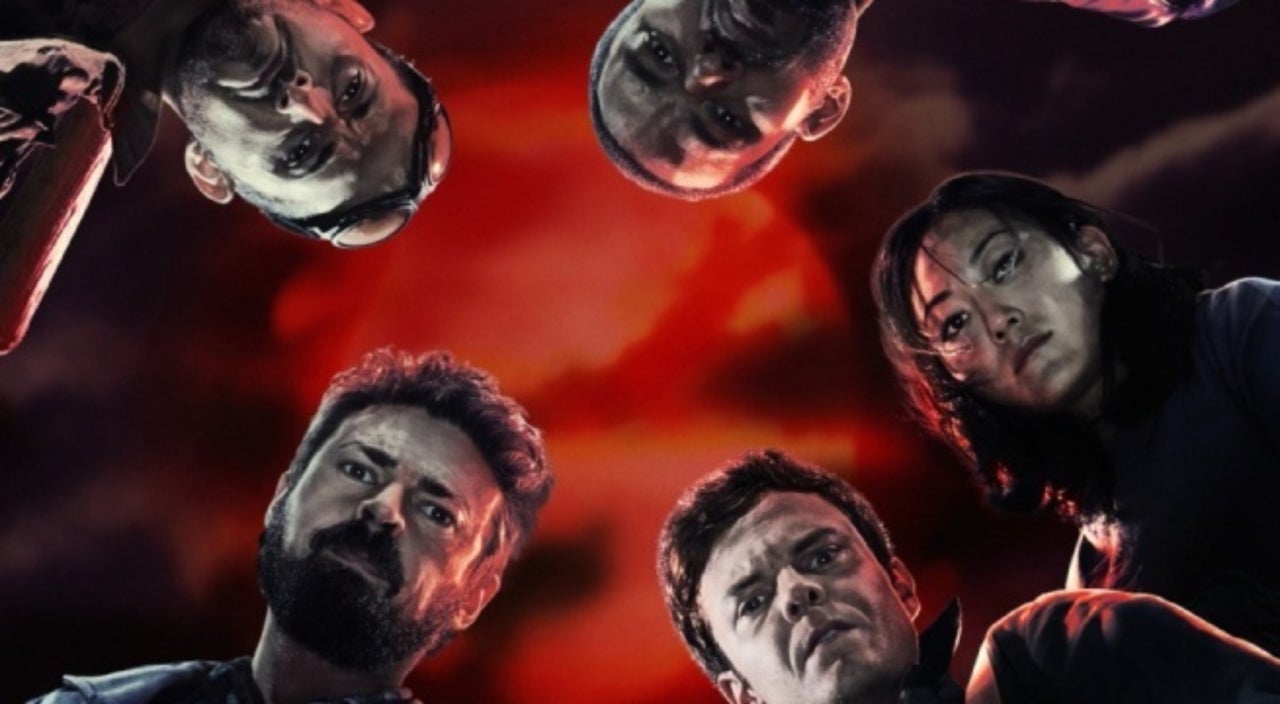 Remember when The Walking Dead started? I watched the first season and it was great! Once they went on hiatus, I went back and started reading the source comic. Also great! Some minor changes here and there but generally faithful to the source material!

As the TV show kept diverging, I kept getting more and more irritated. I think I finally stopped watching around the time they dedicated at least two episodes where everyone had the flu.

Now I understand that copying word for word from the source material may be a bad idea. Anyone remember Gus Van Sant’s Psycho remake?

But diverge too far and you lose the thread that made the property so enjoyable in the first place.

So when The Boys came out, I resolved to ignore the source material for the time being and just go in cold. Let’s see how the show does on its own without any preconceptions. I had no idea what the show was about other than what the trailers showed me. From the trailers, I was completely on-board because Eomer was shooting a baby-laser gun.

So let’s get into this. And fair warning: 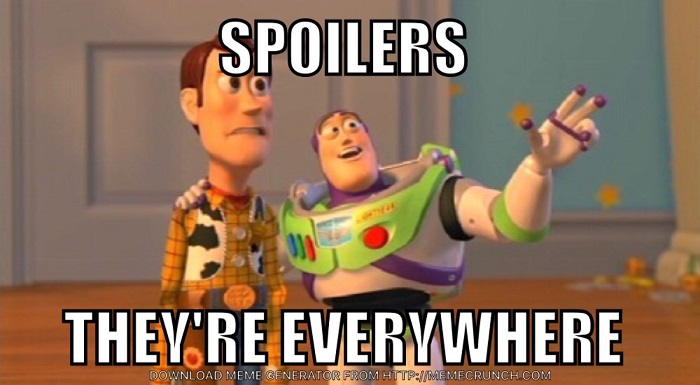 So let’s take our earth basically as it is. Same basic history, same technology, and the culture is basically the same but with one difference: there are superheroes. These guys are chosen by God (more on that later) to protect us. They’ve been the lucky ones to get powers. Amazingly, they are all in the United States.

The “best” of these are the Seven. These are basically the Justice League. Leading the group is Homelander, a Superman analogue with a heavy dose of patriotic cheese. Flight, heat vision, invulnerability, and super-strength.

There’s Queen Maeve, who is basically Wonder Woman. A-Train is their speedster. The Deep is their Aquaman who can even talk to fish. Black Noir is their silent strong fighter who is somewhat analogous to Batman. Translucent is the invisible man with diamond-hard skin. Finally rounding out the 7 is their newest recruit Starlight who is strong and blasts energy from her hands or entire body. 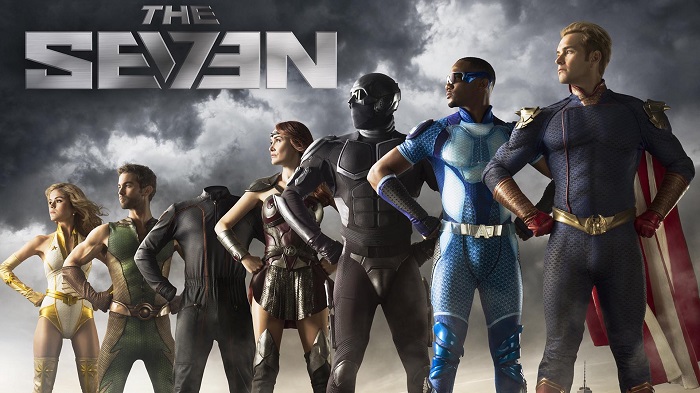 These guys are adored by the public and their image is impeccable, thanks to their public relations handlers from the company that runs the Seven, Vaught. People get saved and have hope and inspiration.

The only problem is these guys (save for Starlight) are complete and utter assholes.

The show opens with Starlight getting accepted to the Seven. On her first day, The Deep drops trou and gets her to service him. Homelander is completely psychotic with deep-seeded emotional problems. A-Train is a drug addict. Queen Maeve is a jaded alcoholic. Translucent can only be completely invisible naked which he seems to be fine with and uses his abilities to spy on his co-workers. Especially the female ones.

They are all managed by Madelyn, a high ranking exec at Vaught played against type by Elizabeth Shue. She is ruthless and ambitious.

Our story really begins with Hughie, played by a very likable, if somewhat beta-male, Jack Quaid (son of Dennis Quaid and Meg Ryan, talk about Hollywood royalty). He has an OK job at an electronics store, lives with his father (Simon flippin Pegg,) and has a great girlfriend. One day he and his girl are talking, as people do when A-Train just runs through her.

She turns into a blood fountain. This pushes Hughie, who previously idolized the heroes like most people, to actively hate them. It’s so abrupt and out of the blue but damn effective.

The situation is pretty public and draws the attention of Billy Butcher, played effectively by Karl Urban. Side note, I could watch Urban in anything. Some have crapped on his accent, I say they can kiss my ass. He’s awesome.

Billy also hates Superheroes for his own reasons. Mostly he hates Homelander. He used to lead a small group of guys who all have their own reasons to stop the Supes. Frenchie, who’s French, and Mother’s Milk, a family man who does this without telling his wife.

As they get deeper and deeper into what they want to accomplish, secrets are uncovered, loyalties are questioned and heads get exploded during oral sex.

The big secret is that none of the Supes are actually touched by GOD. They are created by Vaught who gives a drug called Compound V to babies. This has the same effect as mutants in the X-Men series. No one knows exactly what powers they will get but they will get something. No one is aware of this fact and Vaught plays the public like a fiddle. 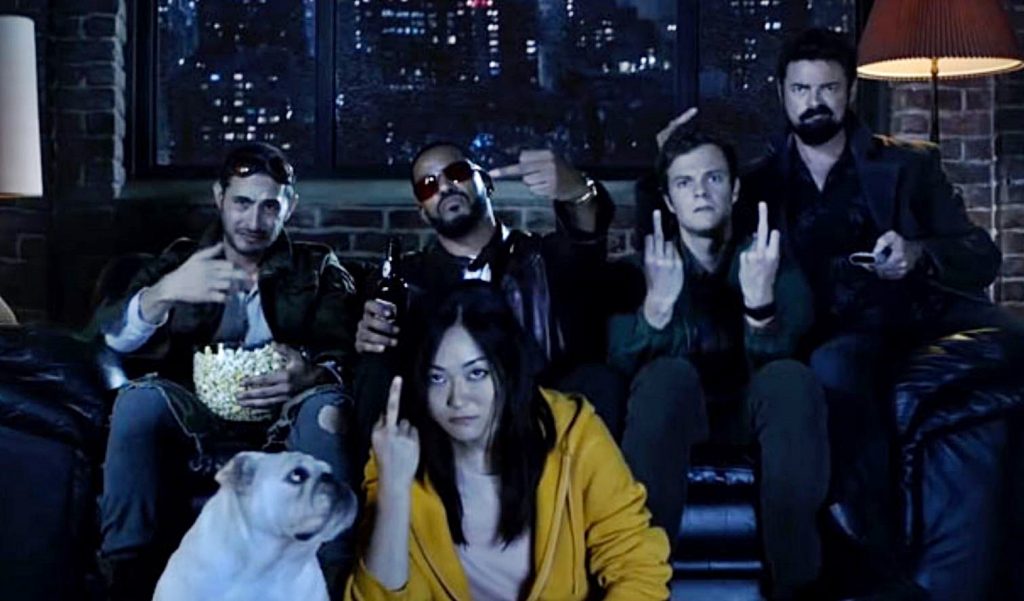 What’s really interesting about this show is the characters. None of them are one-note. Homelander is a damaged lab experiment, a child who never had parents and was pretty much locked up in some facility. He’s a bastard but there is a small bit of sympathy there.

The Deep is someone who pretends to be a big shot but deep (get it) down knows he’s a joke. Queen Maeve is the only one with a conscious but too weak to use it. Also, she’s a closeted lesbian.

A-Train is on Compound V to keep his speed up, lest he lose out to an up-and-comer who might be faster than him. The drug is dangerous to use on adults and is killing him. He displays the usual cliches of a drug addict in denial.

Black Noir is not really a character in this. At best his silent moments make him kind of a comic relief. We’ll see if he gets expanded on in season 2.

Translucent is also killed early on so as a character, he’s not really a factor. But for Hughie, he’s a huge factor.

Hughie is the most interesting character and I think Quaid knocks it out of the park. He could’ve played the good guy with humorous quips who gets in deep but instead Jack plays him as extremely traumatized and damaged. He makes questionable but understandable decisions. He’s a good person and plays the quippy nice guy too, but also a man haunted. His 20,000 ft stares say volumes. I swear this is a star in the making. There’s a lot of layers here.

Billy is a single-minded obsessive. Homelander raped his wife and she disappeared 8 years ago. He doesn’t know what happened to her, if Homelander killed her or she committed suicide. We find out (but Billy doesn’t) that Homelander impregnated her with a super-powered baby which killed her during childbirth. (Or so we think.)

The rest of boys have their own issues and no one is given short shrift. Frenchie seems like just the french tech expert but is extremely empathetic. Mother’s Milk is hilarious in his turns between doting husband binging Downtown Abbey and total fretting badass.

Finally, there’s Starlight, someone who feels just as betrayed as any of the boys but is on the corporate inside. She’s trying to figure out whether this dream she always had of being a hero and the reality of Vaught. Complicating matters is the relationship she and Hughie start. 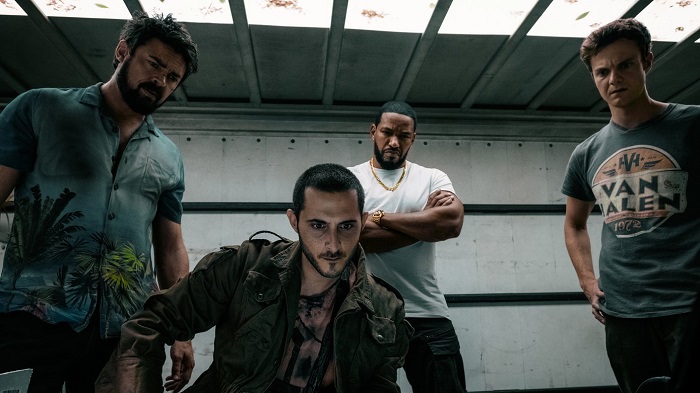 What I was surprised about was how bleak the tone of this show is. The trailers kinda gave the vibe of an action comedy with some black comedy. (See baby laser gun.) That is NOT this show. This is a depressing, downbeat, show with nearly no good guys.

Everyone is damaged in some way. Everyone is lying. The most disturbing idea for me was the way everything we have presented to us in the media is carefully crafted, focus polled, horseshit. Is this surprising? No, it’s very much what’s going on today.

What’s depressing is that most of us KNOW this, yet we keep picking our sides and tribes and swallowing this spunk to the face. This show crafts a very fine point to this idea and it’s sickening.

This is not a criticism, it needs to be driven home again and again, especially with the jelly brained leftists out there who think socialism is good. We know nothing and blindly accept this garbage. Plenty of those on the right who are just as bad. The Christian convention in the show kinda showed that.

While I get tired of the Christian bashing, I think it works very well in this show. Telling the entire world that GOD creates these… well… GODS among us would lend itself to an upswing in religious fervor and corruption. I remember Swaggart and Jim Bakker quite well.

The only real annoying woke moment was when an injured A-Train comes into a shoe store and is watched like a hawk by a security guard because he’s black. It’s out of leftfield and felt like a writer with a chip on his shoulder.

On the other hand, Hughie initially comes across like a bit of a woke beta male when we first meet him. When his girlfriend is turned into a fine mist, this has all the earmarks of a liberal mugged by reality. He’s ready to get his hands dirty and deal with what’s actually happening out there.

So. Was it good? Hell yes. Almost no moments did I feel the characters were given something to do so you don’t forget them. Nothing felt completely contrived except for the aforementioned woke moment. The gore is right up my alley but I will admit that watching a guy’s head get exploded under a lady’s thighs when she climaxes during oral sex did make me squirm.

Will I read the source material? I’ve decided to wait until the show is complete. From what little I’ve picked up around the internet, it sounds like things diverge wildly. From its own merits, I think this show is well worth your time, depending on how hard you like your “R” rating. The sex is less graphic, the violence is so much more.