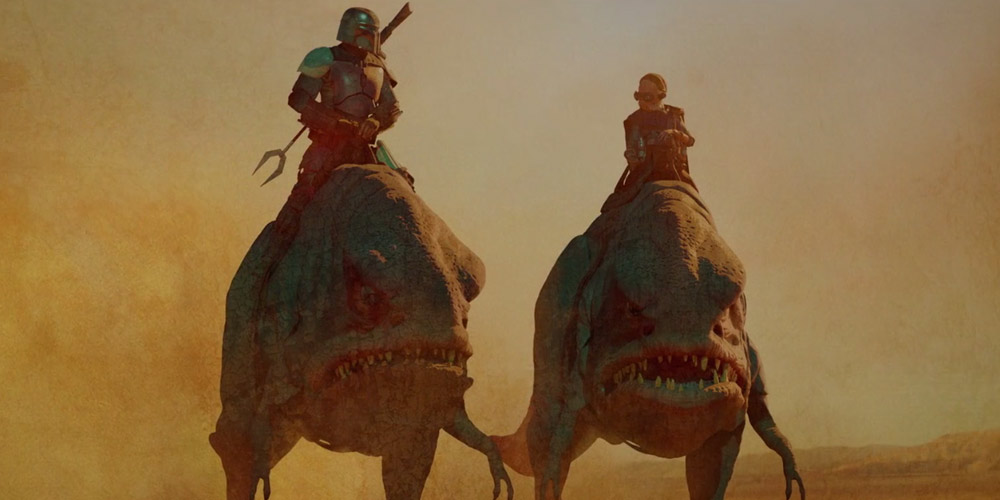 For those concerned, The Womandalorian theory is still intact. Despite claims to the contrary, the reveal at the end of the first episode is not dramatic. Instead, it’s anticlimactic, disconnected and downright goofy.

More on that at the end of this review.

There are spoiler accordions that you can choose to expand at your leisure.

Is It Our Star Wars?

First, you have to define “What is  Star Wars?”

In the mind of many fans of the OT who found themselves let down by The Prequels and in a blind rage over Disney’s crass exploitation, the franchise is more than lightsabers, telekinesis, aliens and spaceships.

The “Star Wars” of our memories and hopes is, first and foremost, good filmmaking.

Star Wars is entertaining and emotionally fulfilling. It’s fresh and it’s exciting while being thematic and stylistically sound, something that is very hard to pull off.

The Original Trilogy was high adventure in the greatest sense. But it wasn’t merely the sets and the story, it was the stylistic choices in the writing, direction and editing that came together to tell a great story in a new world in the best way possible.

With the Prequel Trilogy, you have a weird amalgam of an espionage action-thriller plot mistakenly told using the same style as the Original Trilogy. It didn’t match.

What I have often said about the Marvel TV shows is that they needed to make a great genre show — a good lawyer show, a good private eye show, a good vigilante show — first and then add in Daredevil, Jessica Jones or The Punisher.

Superheroes and sci-fi aren’t genres, they are settings. When they are treated as genres they become boring and predictable.

The product has to stand on its own before fans go “OMG, I’m watching The Punisher in a TV show!”. There has to more to it than just the character or the world.

I didn’t expect The Mandalorian to be high adventure but I did want an intriguing crime/underworld drama.

Unfortunately, it is just a Star Wars show.

Most, if not all, of the moments, come as a Star Wars fan thinking “Hmmm, how does that fit in?” or “Oh, I remember that.” 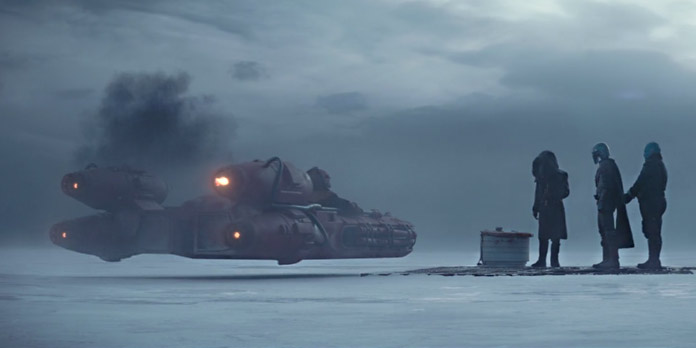 The Star Wars universe hasn’t looked this good since Rogue One and maybe even The Prequels. From the ship and creature designs to the blast doors and bulkheads, the production design is impeccably old school Star Wars.

Those of you who stayed through the credits will notice that the original design for the ice monster was a giant walrus and not a serpent.

How much cooler would that have been? Likely a money issue. 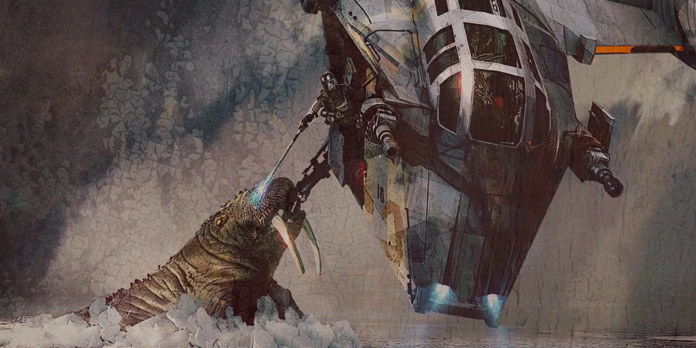 Within the first few minutes, the scope of the galaxy is immediately felt and continues throughout the show. Sweeping desert vistas, wind-swept icescapes, dusty back alleys — these are all Star Wars places

The Mandalorian delves into some of the Extended Universe mythology that viewers only familiar with the movies will be unaware of. This may be intriguing for the uninitiated or it may be confusing. I liked it, it’s the kind of worldbuilding that works.

In one scene, The Mandalorian visits a Mandalorian armorer who forges him a pauldron from a special ingot. There was talk of a Signet and Foundlings, neither of which I know much about but which still provided depth to the world. I'm assuming a Signet is like the Boba Fett skull brand and that Foundlings are some kind of Mandalorian warrior-orphans.

But again, I found myself thinking “Interesting” as opposed to “Wow, cool!”

This may have something to do with the bad.

The costume design, particularly on humans, was generic. In the opening cantina scene, this was especially noticeable: these people don’t look like they have been living in that world at all.

They look like a syndicated sci-fi show from the 90s or early 2000s.

When this is contrasted with The Mandalorian and his abundance of specialized gear and carbon scoring, the effect is discordant.

Who Writes This Shit?

The dialogue is absolutely flat and uninspired. Characters have almost no personality and deliver their lines with a flat, atonal reticence that informed me more of the director’s lack of experience with actors than it does a suspicious post-Imperial frontier milieu.

If there was a Star Wars product that cried out for eccentric characters bloviating or banter between old pros, it’s The Mandalorian.

There is no “Wretched hive of scum and villainy” here, there was no “You’re gonna die here, ya know.”

When you have to translate a program into 100 languages, how idiosyncratic can you make the dialogue?

This may have something to do with the 🤷. 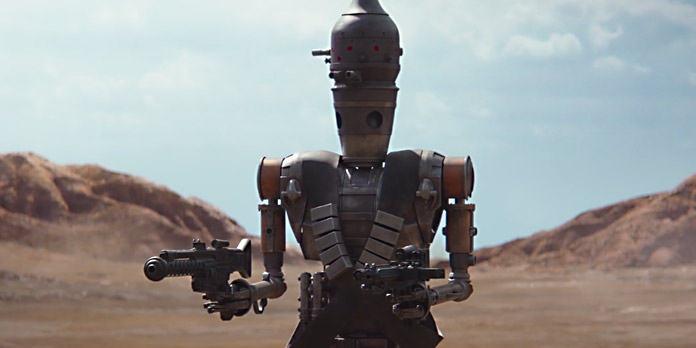 I’m so used to recoiling every time I see something from the OT in one of these Disney productions that any fan service seems like pandering to me.

Is a callback required for the story or is it just cynical nostalgia mining?

With a show set directly after Return Of The Jedi, there is going to be a ton of familiar designs and concepts.

Ugnaughts? Sure, why not!

But there is other stuff too: do we really need to see Salacious Crumbs being spit-roasting? I get that it provides flavor but it's still of the "These Are Things I Know!" school of storytelling. 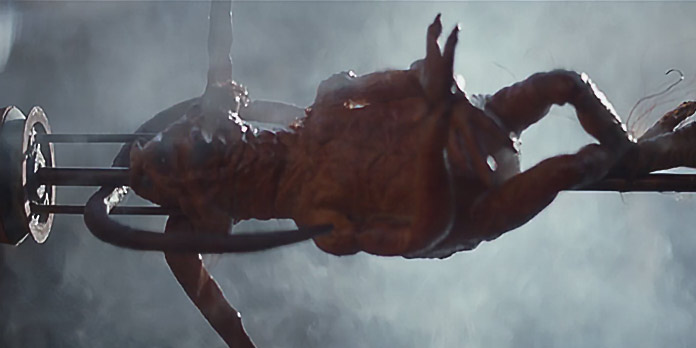 Why in the hell is a one-time freezing process used in a very specific situation — i.e. Cloud City just happened to have carbonite facilities — now the norm for bounty transport?

Remember: "He's no good to me dead." This means it wasn't routine!

The unnecessary fan service was discrete and tastefully done. This isn’t like Rogue One where they just shoved name characters in front of the camera for vintage feels.

I guess three or four times isn’t that bad, then again it’s only thirty-five minutes.

The show is basically a half-hour long. And that is with plenty of filler.

A completely unnecessary scene where The Mandalorian has to break a wild blergg is three minutes long. 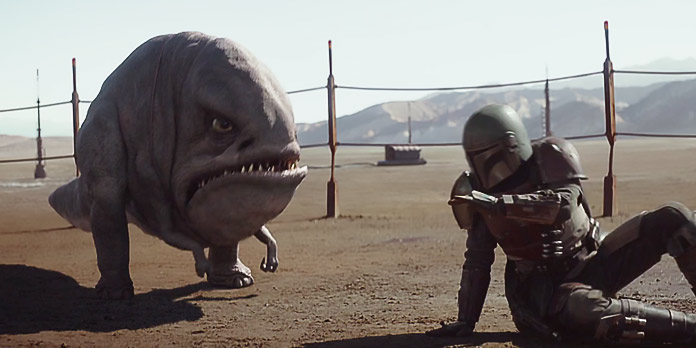 The setup to a forced Carbonite freezing of an unruly bounty is at least two minutes too long.

So that's already five minutes of character development with series regulars or a setting up a subplot we won't get.

And that's just in one episode.

What this tells me is that they have taken the Boba Fett movie that was planned before Solo bombed and stretched it out to four hours without filling in the time with meaningful moments or interesting characters.

They just popped in new scenes that don’t serve any greater purpose than being, at best, mildly entertaining to some people.

As with everything from Disney’s Lucasfilm Star Wars it’s lazy and rote, relying too much on the past and a supposable eager and undying fanbase than either innovation or commitment to creating something timeless.

It's a baby of Yoda's race, which is so rare as to be unnamed in Star Wars lore. 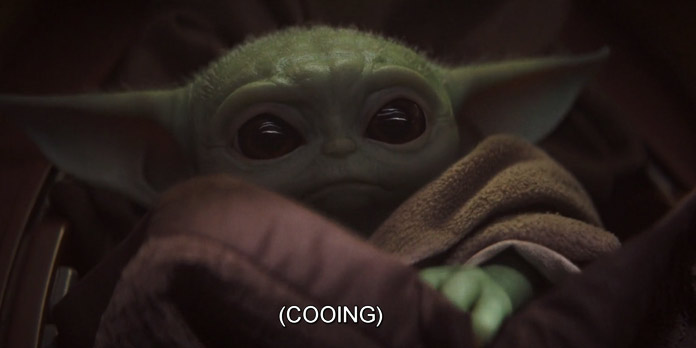 Are we supposed to think that Yoda force ghosted into a newborn?

Are we supposed to assume it's Yoda's clone?

Is it Yoda's son? Will this Yoda baby show up in The Rise Of Skywalker?

I have no idea what it means. Either I’m really dumb or the show is. Maybe it’s part of Star Wars lore that I’m not aware of.

Maybe that’s part of the mystery box! What does it all mean???

And this is not the big reveal, btw. Not by a long shot. They might be going for a reveal at the end of every episode, so strap in, boyos!

The Mandalorian isn’t offensive or canon wrecking, but it also isn’t entertaining. It might be the best thing Star Wars since the OT, but that isn’t saying much considering the absolute trash that is the PT and Disney Wars.

It should be better, a lot better.

Make the episodes 50 minutes, take out the filler, let some improvisation happen on set, go for an R-rating; you know, deliberately commit to an HBO-level TV show instead of buttering a two-hour PG-13 movie script over eight episodes.

On the other hand, it looks like Star Wars, it has cult actors that we like and it shows us things we know. If that is enough — Mazel Tov! — you have a good way to spend a few hours over the next couple of months while waiting to die.