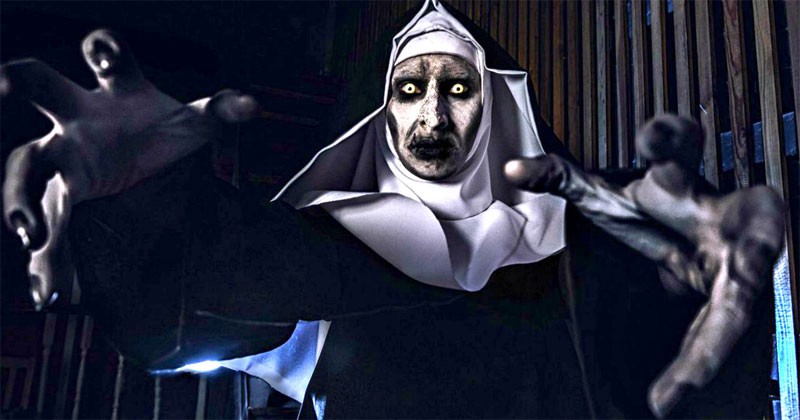 Horror is one of those genres that is very divisive. A lot of time people either love it or hate it — and the ones who love it really love it! Since I first took in Nightmare On Elm Street at the tender age of 4 I have been a die-hard horror buff.

You can usually tell a horror fan right off the bat because they will be the ones who suggest you buy them creepy gifts like Living Dead Dolls (I have a massive collection & it’s going to keep growing along with my Horror Pop vinyl collection) or insist on talking about Mary Shelly’s Frankenstein. More often than not, we are pretty obsessive about it: ask me about horror, I’ll kick off straight away and won’t stop until dawn!

So as a serious horror movie fan I just want to talk about The Conjuring universe for a minute. With The Nun now in cinemas, what better time to rewatch The Conjuring movies into a chronological watch? No better time, that’s when.

Like the other spin-offs, The Nun is a prequel to the main Conjuring franchise, expanding on a character we first glimpsed through our fingers in The Conjuring 2. This means it needs to be shuffled into the current timeline, like a cursed card being folded into a haunted deck.

The Conjuring was a great film, the suspense was unreal and Bathsheba was truly terrifying! Based on true events, this spine-chiller tells the story of a New England family who begins having encounters with spirits in their farmhouse.

My thrill level was at maximum with this one, until The Conjuring 2 came out and kicked the first film off my scary top spot! Ed and Lorraine are back! Set in 1977 England, this film was inspired by events that have come to be known as the Enfield Haunting.

Of course if you have seen The Conjuring movies or any of James Wan’s Insidious films you already know there’s more going on here than just a poltergeist infestation, so let’s get into the next film in this shared universe…

For months the public has been inundated with scary trailers and photos of The Nun and they are plenty creepy looking.

Religious horror is truly one of the scariest subcategories of the genre and a figure like a nun becomes more terrifying because of their traditionally wholesome persona.

The Nun has what you’d expect: creepy surroundings, an old Romanian castle to get lost in and — of course — creepy Sisters of Mercy whose intentions are unclear. Unless you’ve seen the trailer. Or know the title of the film.

It probably won’t be the scariest movie you’ve ever seen, but yes, it’s scary enough.

Aside from the several jump-scares, the mood of the movie is dark, eerie and atmospheric. In the ancient abbey of the castle, there are a lot of shadowy corners and long hallways that you can’t see into, and that ultimately ups the heartbeat.

The things that detract from the movie’s scariness are the flimsy plot and its “connection” to the preexisting Conjuring movies. I use ironic quotes because the connection is pretty stupid and as much as the filmmakers try at every turn to make The Nun canon it somehow always feel like a standalone.

You wouldn’t think The Nun would have funny moments, but it does.

There are other self-aware lines that add to the audience’s enjoyment but, unfortunately, there are also some unintentional laughs. And that is not a good way to keep people on the edge of their seats.

Some of the things that happen over the course of the movie’s 1.5-hour runtime come right out of the horror cliché book, including:

You get the idea — it was impossible not to laugh sometimes. And that can be exhausting.

If you’re a horror fan, you’ll most likely find something to enjoy in The Nun.

It has its faults, but maybe if you go with a bunch of friends or with someone just as passionate about horror as you are, there’s fun to be had. Otherwise, put it behind you.