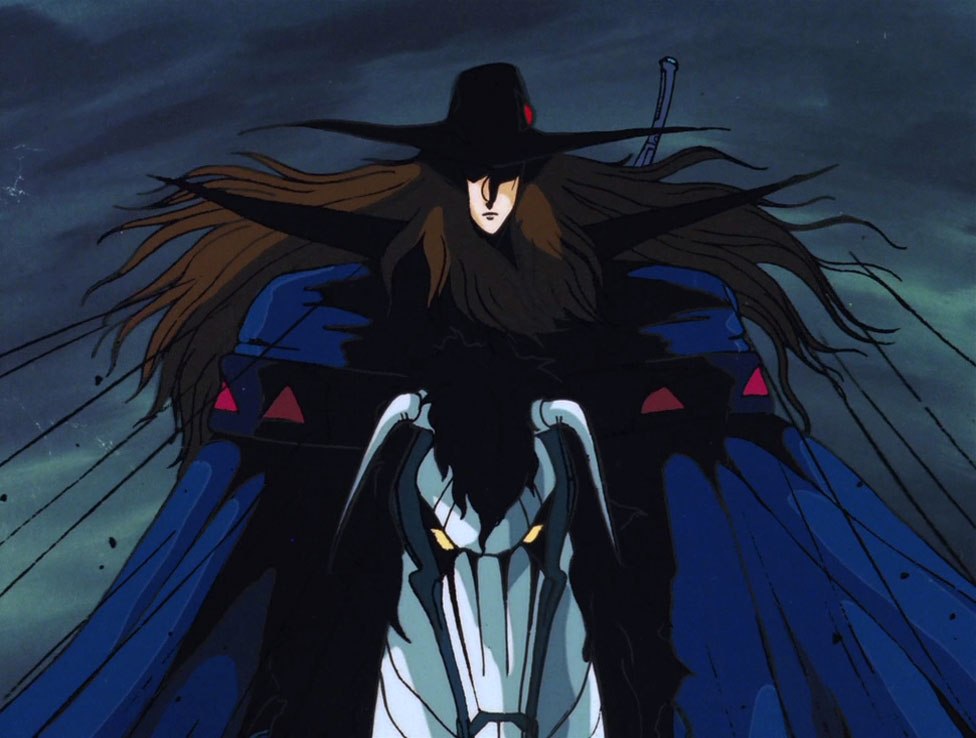 Watching Alita: Battle Angel inspired me to watch the OVA of Battle Angel Alita that pretty much is the movie with all of the motorball scenes and spaceships from Mars cut out.

This got me on a kick for anime from when I was a kid.

One of my first experiences with anime was watching 1985’s Vampire Hunter D on DVD at a friend’s house in high school.

The first time I saw Vampire Hunter D it was the most badass thing I had ever seen. Nudity, disturbing mutants, and brutal gore. Every anime I watched at my friend’s house seemed to be breaking some taboo that wouldn’t let it be shown on regular TV.

Even saw the infamous — and at the time banned — Outlaw Star episode that didn’t show up on Adult Swim.

Vampire Hunter D is your typical Western. Except, it takes place thousands of years in the future, is full of futuristic tech like cyborg horses, horrible mutants roam the wastelands, and supernatural creatures like werewolves and vampire are real.

Besides little things like that, it has a lot of the tropes of Westerns.

A mysterious stranger shows up in town, a young girl who works on a farm hires him to deal with a rich guy who is terrorizing the town… if you squint really hard it could be a Clint Eastwood or John Wayne flick.

The enigmatic “D” turns out to be a vampire hunter, who the young girl immediately falls in love with because of some serious daddy issues. D goes about being a general badass but manages to get taken down twice by the main bad guy’s goons before the final fight.

D is saved by a conveniently powerful bloodline and a hand that was never explained in the film. That hand was the coolest thing in the movie to my teenage self. An autonomous hand with a will of its own saving the main character was something I’d never seen before.

Overall, Vampire Hunter D doesn’t have the flash that it had when I first saw it. If the movie came out today I would bash it for trying to be too edgy.

Maybe I have become too cynical. Either way, I would still recommend it to anyone who can overlook the now outdated animation and doesn’t mind a little gore.

Vampire Hunter D and the 5 As of Anime

Vampire Hunter D is older than I am. While there is an overreliance on things like speed lines to convey action, it’s still a fun ride full of exploding mutants and extremely bloody death scenes.

I became nostalgic for a time when someone could be punched by vampire eye beams and brains would blow out of their head.

Anime has gotten tame in comparison to the 80s and 90s.

I may be harsh but Vampire Hunter D is starting to show it’s age. Ugly strobe effects, recycled animation, and cheap effects are readily apparent now where I never saw them before. The animation wasn’t bad for its time but it feels outdated now.

I watched the dub and the acting was adequate. Really the worst part was D himself. He had this overly manly voice that didn’t quite seem to fit.

Doris is attractive but not a bombshell. Twenty years ago an animated breast had a much bigger impact than it does today. She still is easy on the eyes. There is a steamy shower scene and a few wardrobe malfunctions… more than your typical anime today.

OK, I ran out of As but work with me here. I could have gone with allegory but sometimes a story doesn’t have a deeper meaning. Sometimes it’s just a story about a badass half-vampire that stabs another vampire so hard that the landscape changes from a wasteland to a beautiful field.