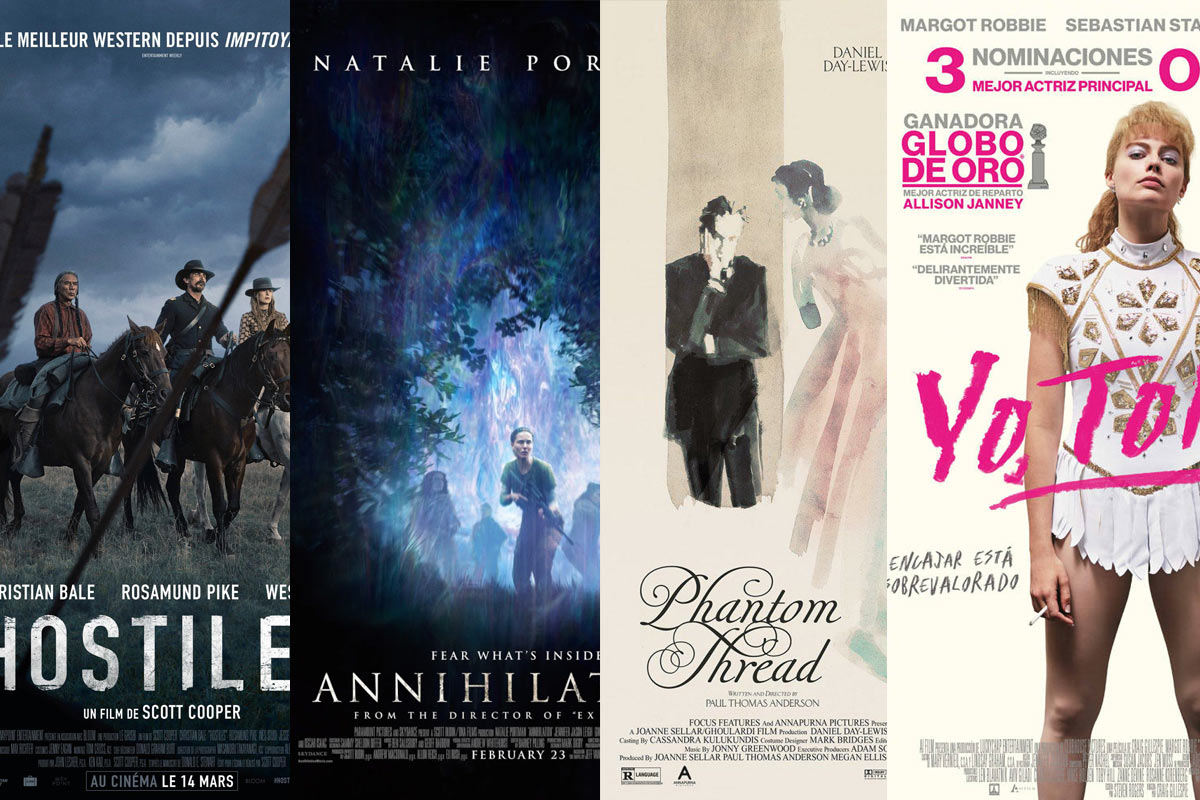 I’d like to say something glib and self-glossing like “life’s too short” but the truth is I don’t want that trash in my memory banks. Like pork rinds and Mountain Dew are poison that destroy the body, bad movies destroy the mind.

And, like a bad relationship, nothing clears out the residue of a trash film better than vodka and just walking the hell away.

There is something about taking that deliberate action to change course in mid-viewing and bail that erases hack dialogue, flat performances and terrible CGI from the memory better than anything you’ll find in Anchorhead.

Plus, the theaters will usually give you your money back if you ask them.

This winter, I managed to sit through:

And I walked out of the following four movies:

Wait, it’s directed by that Scott Cooper guy? Bale and him teamed up for the 2013 blood-and-rust offering, Out Of The Furnace (1.5/5), which was one of the most bleak, depressing experiences of my cinematic life. I can point to that movie as both the reason why, and time when, my wife entered menopause.

I just remember her being totally silent for the whole ride home; she looked both disgusted and physically ill. Then the came the headache, the hot flashes, the insanity. Talk about Hostiles! Man, she went nuts after that movie and the only reason I survived was banana bread and lots of strong nylon cord. So, that is one huge strike against it.

Another black mark is that it explores the completely fresh concept that  Indian and Indian hunter might be two sides of the same coin. You know, the Jungian thing, sir.

Why I Put This Dead Horse Down

Like a buddy of mine said: “That pandering, pretentious, self-hating movie was the worst I have seen in a while.”

Just take a look at this video and you’ll get an idea of where Christian Bale’s head was at when he was making this movie:

Where the hell does this sheep-loving Welshman get off on not only lecturing us about our wars with the Native Americans but in also trying to tie those wars back to alleged current events; current events of which he doesn’t mention with any specificity?

This is a typical gimmick that empty-shell actors and celebrities use to gin-up interest in their dead-end projects.

Make some broad, philosophical statements like “With everything that is going on right now” or “The way our world has become so [insert bad thing here]” and your audience might assume that your movie has something timely and important to say.

I get that you have to try to market this to TV-taught, wine moms who bleed white-guilt like cultural hemophiliacs but what the fuck, Christian?

And that’s the mentality that sums up this movie.

I heard that Bale’s character, who is gratuitously shown reading The Odyssey (5/5) in one of the opening scenes, starts off like: “I hate Indians. I stack their bodies.”

Is There Any Meat On This Glue Stick?

No. It’s strictly a signalling platform for the creatives involved. Not one person I’ve encountered, online or IRL, has anything good to say about this movie; in fact, it’s almost universally hated.

Within 10 minutes, I could tell that there was absolutely nothing here except two-hours of nihilistic, liberal self-flagellation disguised under a veneer of grotesque brutality.

However, if you are into gruesome, rifle-vs-tomahawk ultra-violence this movie might hold something of interest for you.

But then that would make you a sick, sadistic son-of-a-bitch who’s also stupid for not popping in Bone Tomahawk (2.5/5) instead.

Paul Thomas Anderson is widely regarded as one of the greatest auteur directors currently working in Hollywood. He put together a slick, intriguing character study with Hard Eight (3.5/5), showed some amazing, Altman-like chops on Boogie Nights (3.5/5), and in 1999 went legend by delivering one of the greatest movies of all-time, Magnolia (5/5).

But something has happened to him. After Punch Drunk Love (4/5), a movie I saw three times in the theater, he started to become too formal, too controlled and much less weird.

I remember thinking “that’s it?” after There Will Be Blood (3.5/5). And I straight-up walked out of his last two movies. So why did i even bother?

You have to keep giving this guy a chance.

Plus both PTA and Daniel Day Lewis, who in his alleged final performance stars as clothing couturier Reynolds Woodcock, could be a stand-in for the main character. Lewis and Anderson, regardless of my opinion of their product, are clearly obsessive, perfection-at-any-price artists whose vision and realized-reality is not to be tampered with by mortals.

Why I Jumped Out Of The Triangle Shirtwaist Factory

It wasn’t because The Phantom Thread was on fire, I can tell you that much. In fact, the opposite. It is almost feels like it follows a pattern, a pattern like those seamstresses followed while they were locked to their sewing machines on that awful day in 1911 — #NeverForget.

In PTA’s first four films, and to some extent There Will Be Blood, literally every scene is interesting, crackling with energy, passion and ideas. There was a sense of movement, intensity and madness in those movies that is just missing from The Phantom Thread.

It’s boring as a petticoat. Without anyone inside of it.

Anything Eye-Catching In The Woodcock Collection?

This is not a “bad” movie in any sense of that term. There are a lot of interesting observations about this tortured genius who happens to torture everyone around him with his eccentric and schizophrenic behavior.

In this scene Woodcock’s muse, in an attempt to be helpful and caring, interrupts the artist while he’s arting. It’s really great stuff and the movie is full of this kind of thing:

As the creator and editor of this web site I could, in many ways, be considered a genius.

So, I can completely relate to the frustrating experience of being surrounded by people who are just getting in the way all the time. But I still treat them with the respect and dignity that they deserve as fellow passengers on this big blue marble hurtling through space.

The kind of misanthropic psychopathology demonstrated in Phantom Thread is just not something that I find very entertaining. Maybe because I’ve found a better way to be, a better way to live, than Mr. Woodcock.

You know the story: trailer-park, skate-trash hires goons to take out her ice-princess rival.

I, Tonya is played as a comedy-of-errors biopic with a heavy dose of low-skill criminality; a “crimedy” for you clever city-folk. Faux candid interviews mock the white-bread affectations and aspirations of the protagonists. We are given the the very clear impression that these people shouldn’t be doing their own family-planning, let alone engaging in any kind of criminal conspiracy.

Why I Got Off The Ice

We get it… they smoke. Cigarettes. A lot. What’s more they smoke Newports even though they’re white. They think Red Lobster is a real classy meal. Haha, those fucking rubes!

I got tired of the hatchet-job evisceration of these lower working-class people and their lives for cheap cosmopolitan laughs.

The performances, for which Robbie and Janey were each nominated for Oscars with Janey unbelievably winning one, are pure dinner theater.

Mommy Dearest sucks a Virginia Slim, scowls and drops another “The world is tough. Bitch up, sugar-tits!” pep-talk and the dutiful (yet rebellious) daughter happy-faces through her next routine the best she can considering the deprivations of her dirt-road upbringing.

At one point, Tonya attends a competition wearing a fur coat made out of the skins of rabbits (or squirrels?) that her mother’s boyfriend killed.

Did It Medal In Any Category?

When she’s out on the ice, Margot Robbie’s TonBod looks fantastic.  It’s been widely publicized that she hit the gym hard to bulk-up for the role and it shows; especially in her thighs and glutes, which are THICC AF. Or maybe it’s a body double.

In any case, I’m not waiting around for 20 minutes just to get to the next shot of Robbie’s rear-end poking out from underneath a fluttering ice skirt.

A team of female scientists venture into a shimmering area surrounding the impact of an asteroid and encounter extreme mutations to the environment as well as what could be changes within themselves.

This movie, like Ex Machina and 2016’s Arrival (1.5/5), is part of a growing genre of boring movies that are being niche-marketed as the “thinking-person’s science fiction”. In this world of constant self-branding and self-promotion such films are plug-and-play thoughtfulness for the “Look At The Big Brain On Brad” set.

These are the kind of movies that Nerdist and Collider do 15 minute videos on entitled “Everything About Annihilation Explained”. And it’s fucking embarrassing.

But still, the trailers show this team of science-ladies toting around M4s in the bush, getting attacked by what looks to be mutant bears and overall having a real weird time inside The Shimmer. It could be good.

Why are they all female though? Does that give some kind of advantage? Were previous male or gender-mixed teams wiped out? Do women who went into The Shimmer survive longer than the men? Like almost everything female in sci-fi these days, it’s never explained.

Why I Really Don’t Give A Damn About The Shimmer

Yes, she has less personality and screen presence than a clothes hanger.

That destroys the believably of almost every film she is in. It’s like Kristin Stewart got a Valium prescription and those pills are getting paid to act.

And again, in Annihilation, Nat is as stone-faced and dead-eyed when unloading her M4 into a mutated crocodile as she was when firing aimlessly into the air in Attack Of The Clones (1/5).

But honestly, none of these actresses sell the setup or the story because the writing is simply sloppy and flaccid. There is no tension between the characters, it’s all one big hugbox, weekend retreat, until the plot needs someone to do something dumb and then that someone acts irrationally as an excuse for doing said dumb thing.

So, I really didn’t care what was going on. Shimmer, shammer, scammer, fucking ShamWow.

Was There Anything About Annihilation That Will Make Me Sound Smart At My Next Speed-Dating Meetup?

Yeah: tell them you walked out.

If you’re chatting up a girl then she will admire your uncompromising dedication to quality and your ability to take decisive action.

You are the alpha wolf. You don’t waste your time on inferior entertainment product, you’re onto the next hunt for mindless distraction from your responsibility and on-rushing death.

Of course, you will have to answer for why you were at a movie like Annihilation in the first place. But you’ll think of something; you’ve been lying your whole life, it’s second nature to you.

And if you’re a girl getting to know some guy… bahahahahaha… no women read this site.

Check out the ratings for every movie I have ever seen at Letterboxd: