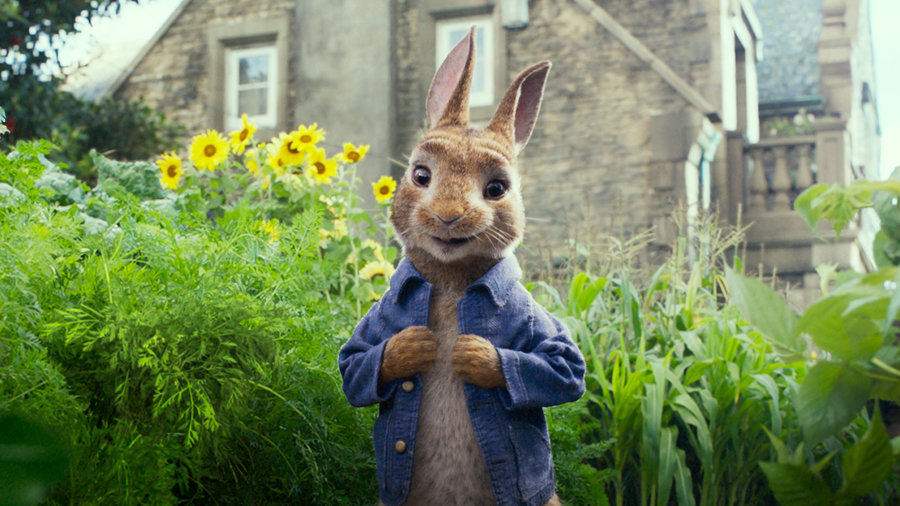 Now that we’ve clearly reached a point of complete CGI saturation in movies, the tool itself must be used to create art with some style.

Gone are the days of audiences marveling at a Tyrannosaur stomping across a rainy road, or Tom Hanks shaking hands with JFK.

Almost nothing is impressive anymore.

These characters are not only created using excellent CGI, they are given style and personality that is uniquely their own, even before a word of dialogue is spoken.

Within the first 30 minutes of the movie, I began to get the distinct impression that the script as well as the final edit was a cobbled-together jumble of different story pitches and story meetings.

It’s as if Domnhall Gleeson and Rose Byrne are acting together in a completely different movie from the CGI critters.

Their dialogue feels like a watercolor painting in that there are recognizable bits and pieces but mostly it’s a blotchy mess of ideas and happenstance.

The English Sense of Humor?

I suppose by now I know a little about the English sense of humor.

It ranges from the very dry to the overly insane. I don’t understand it sometimes and I take that responsibility on myself.

But I do recognize when the tone of a movie is all over the place.

The movie opens by poking fun at Disney animated stories and sorta-kinda maintains that subversive sense of humor throughout the movie. It then goes full bore by killing off a major character with the first 15 minutes and lingers on the corpse. Peter Rabbit even comments on it and tries to milk the situation for laughs.

After that, we get dashes of Home Alone, Love Actually, The Matrix, every Seth Rogen comedy ever made, and even a bit of Gleeson doing his General Hux screaming.

So the story goes that Mr. McGregor (Gleeson) has unwittingly stepped into an ongoing feud between agrarian humans and finely-dressed forest animals, most notably the rabbit family. His neighbor Bea (Rose Byrne) steps in to referee the mess, initially taking the side of the animals but gradually warming to McGregor, all while wearing the tightest jeans and lowest low-cut dresses she can find.

Hijinx ensue and everyone, both human and animal, learn valuable lessons about themselves and the nature of co-existing. Hooray!

I am no fan of James Corden’s comedy stylings, especially as a replacement for god-man Craig Ferguson. However, Corden does have a pleasant speaking voice and he makes Peter Rabbit fun to listen to.

His actions are another matter.

As I said before, the script is a mess and it seems as if they told Corden to just ad-lib everything while touching on story beats here and there.

Peter Rabbit tears a new asshole for the McGregor homestead and every three seconds or so Corden says something completely random or mean-spirited for a laugh.

The editing is frenetic, I suppose to assist Corden’s zany dialogue, and while I appreciated the pace early on, it quickly got tiresome as the movie shifted tone.

Much more structured and impressive are Peter’s three sisters: Flopsy, Mopsy, and Cotton-Tail.

Cotton-Tail (Daisy Ridley), in particular, is very funny. She’s a take-no-prisoners mercenary and I found myself anxious to see what she would do next.

My lasting impression of effects-man Rob Coleman is of him grimacing into a mirror and then animating his expression onto CGI Yoda, as the Jedi Master clung to a Senate pod, his claws digging scratches into the polished surface.

I haven’t followed his career with great interest since then but I was delighted to see his name pop up in the main credits.

Simply put, the CGI in this movie is excellent.

The animals feel real. They have a real weight and while not completely nature-correct, they have a ton of style.

The animation department somehow pulled a wonderful performance from each rabbit face without breaking any laws of nature. They manage to make them smile without smiling and look sorrowful without frowning.

I was very impressed and, other than Rose Byrne, the animation was my favorite part of the movie.

What Say The Kids?

The way I gauge my 3-year-old daughter’s enjoyment of a kid’s movie is if she exits the theater immediately asking questions about it and reciting bits of the movie.

If I have to ask if she liked it, I know she only tolerated it. I didn’t bother to ask her this time and she didn’t mention it. Enough said.

Peter Rabbit is a Redbox rental at best.