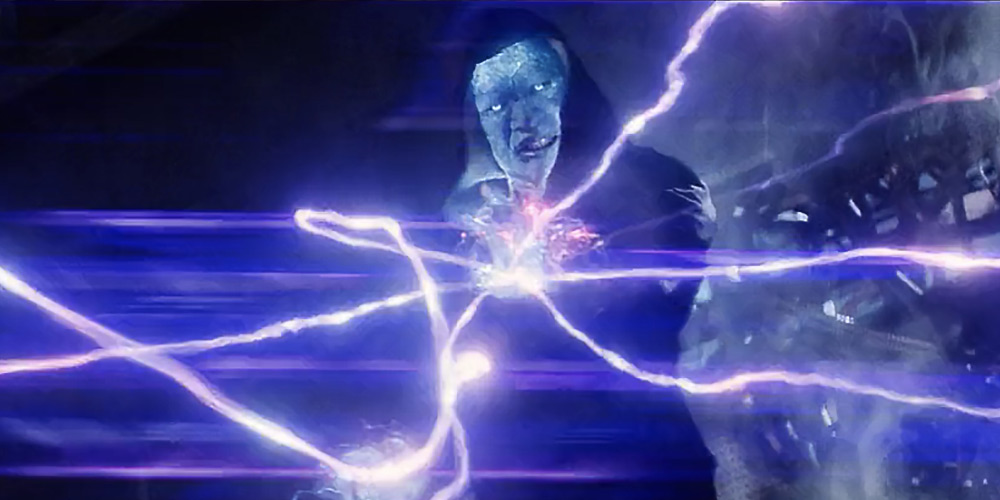 The Amazing Spider-Man 2 was co-written by Roberto Orci and Alex Kurtzman, the Bad Robot word processing/data entry monkeys whose collaborations gave us Legend of Zorro, Transformers and Transformers: Revenge of the Fallen and of course their brand of Star Trek, which should have been marketed as…

“The Human Adventure is just beginning… for millennial morons!”

I don’t think they’ve ever written a script where they weren’t copying and pasting entire chunks directly from a Final Draft file of someone else’s much better story.

I hate their work with everything I got in me.

The Transformers plot was a rip off of ID4 for fuck’s sake.

That’s the equivalent of tracing and reproducing a county fair/truck stop painting of Our Lord or Dutch Reagan for your M.A. final.

Their one acceptably okay movie script was Mission Impossible III and even that was a pretty blatant True Lies ripoff.

So you can bet I went into Amazing Spider-Man 2 expecting the absolute worst piece of soul-sucking, time-wasting hackery.

And you can imagine my surprise when the movie started out great! I mean perfectly great, capturing everything about Spider-Man that the Raimi trilogy missed.

I don’t know who gets the credit, whether it be Director Marc Webb, who opened up the look and feel of the film considerably from the last one, or those — ahem — writers, it gets one thing right and in retrospect, it gets it really, really right.

The Web-slinger stands out in this film as a New York hero and personality.

In the first fifteen minutes or so — it’s straight out of the comics Spidey chases down a hijacked Oscorp truck containing a shipment of plutonium. It’s a fast-paced, reasonably witty and well-orchestrated bit of introductory heroics and for the first time in any Spider-Man movie, the creatives establish the sense of speed, confidence and energy that Spidey brings when he’s in action.

His interactions with the everyday folk are not wince-inducing and awkward the way it is in the Raimi trilogy and even the previous movie, where the filmmakers are clearly kissing the asses of the New York film commissioners and shoehorning in scenes of the hard-working blue-collar New York Joes.

Yeah, yeah, yeah. New Yorkers. They’re all heart. Every one of them.

It’s not that. It’s organic. Almost a throwaway. He’s part of the NY scene.

And to reiterate, this is where I really like Andrew Garfield’s performance, more so in this film than the last. Peter’s attitude behind the mask is smart-alecky and goofy but at its core, it’s energized. He’s clearly in charge.

So why isn’t the film good? And why did it bring the Amazing trilogy to a crashing halt?

Did I Mention Orci & Kurtzman?

And the usual studio tampering and meddling that ruins one of these big-budget bonanzas.

After the satisfying beginning, the film devolves into both Batman Forever and Batman & Robin.

Leave it to Orci and Kurtzman to mine from the renowned low point, the clear and undisputed runny shit sandwiches of the entire comic book movie zeitgeist.

Blame To Go Around

I can’t spit at those clowns enough, though in the end, it’s the director who is responsible for a film. He approved this horseshit and committed it to the annals of cinema history.

If I had a moderately successful first entry into a franchise and a studio schmoe calls and said:

“Kid! We got these great writers name a’ Orci and Kurtzman and they’re major Spidey buffs! You gotta meet with them!”

His stoop-shouldered feebleness in the face of studio interfering is the takeaway from this trainwreck of half-assed world-building and schizophrenic, threadbare plotting.

In his defense, Webb did a few things right on the human level.

Sally Field stands out as Aunt May where she insists to Peter that she’s his mother. Dane DeHaan is very good at first when he’s simply Harry Osborn reunited with best friend Peter Parker. That scene is better and more vital than anything James Franco and Toby Maguire produced together.

All that for nothing in a movie impatiently trying to get to the next movie.

Webb should be relegated to directing Disney Kids TV for all eternity for allowing that crap performance to stand.

To say nothing of the reason he became Electro. I just watched the film again and it’s still the absolute worst bit of non-explaining, obfuscating nonsense.

Do you know how you deal with Electro’s origin?

No matter what explanation you provide its bullshit. Like Sandman and Ock and pretty much all comic book origins.

So I’d have just started the film with Spidey saving the Oscorp truck and down the road there’s Electro’s holding the people of Times Square hostage.

All in a day’s work for Spidey. And make Electro an unrepentant bastard like he was in the comics, not a wronged fanboy.

Though I think Rocket Racer would’ve been probably been an easier fit for Jamie Foxx and would’ve worked in the madcap New York/ Marvel street-level world that the film almost succeeded in creating.

But that, of course, would’ve been probably been viewed by the powers-that-be as racist, casting a black actor as a criminal black comic book character.

Orci’s the genius who retorted on an AICN talkback that they didn’t cast an Indian or Arab as Khan in Star Trek: Into Darkness because a person of color in the role of a terrorist could be construed as racist.

Webb, Orci and company must have reasoned that it’s so much safer and in step with the 2014 political climate to cast Electro as balding, plaid-pants wearing doofus straight out of a high school pep rally sketch.

Anyway, I say in the film that should’ve been would have Peter taking care of Rhino and Electro and then Pow! Move into the story of Gwen and The Green Goblin.

A James Bond opening is a proven winner. I can’t stress that enough if you must have twenty villains in your movies. You’ve still planted seeds for your Sinister Six movie and you’re not insulting us with the worst possible bad guy story.

There isn’t some rule that says the villains must be integral to the plot, is there?

What was the plot anyway?

Throw in Electro as a distraction and a bunch of gobbledygook about Harry Osborn needing Spidey’s blood so he won’t die from the same disease that killed his father?

Orci and his magic blood stories!

Instead of time-wasters straight out of Batman & Robin with Dr. Kafka (Fuck!!!) and Electro can we simply focus on Peter and Gwen’s relationship so when she actually dies, you know, it matters?

I could go scene-by-scene on all the missteps the script and direction make, chiefly the violently fluctuating tone from earnest young romance with Peter and Gwen to cartoonish buffoonery with the aforementioned Jamie Foxx and Martin Ctokas, to hastily scripted sludge with Harry’s transformation to the Green Goblin and Gwen’s death.

In the middle of it all: a magic subway car that has all the answers Peter needs.

But why bother nitpicking? Candy from a baby.

I will say that I liked the ending of the movie quite a bit, at least the very last shot. There’s a bit of on-the-nose, heartstring-pulling with a kid dressed as Spider-Man that we all could’ve done without –and was done much better as a throwaway in Iron Man 2, but aside from that, showing Peter/Spidey back in the saddle again and about to beat the Rhino’s ass was a terrific way to end on a high note.

But I think I’m alone here. Most people either hated the movie or just flat out can’t remember it.

I see it as “What could’ve been.” Like with Star Trek.

Take a few elements from each movie and they might add up to one great movie.

The funny thing about this film is it not only killed the planned trilogy and paved the way for the Marvel resuscitation of the character; it also stalled the careers of Andrew Garfield, Marc Webb and dissolved the partnership of Orci and Kurtzman.

After all the times those two succeeded wildly where in a just world they would’ve been laughed out of town, when they actually write something that wasn’t their absolute worst, the movie-going public and Hollywood finally said “Enough! We’ll find some other hacks!”

Who will carry their mantle?

Last point, the music in this film is a major step down from The Amazing Spider-man. Webb and the producers went from James Horner’s superlative and underappreciated symphonic score for the last film to Hans Zimmer, Pharrell Williams, Junkie XL plus a few others noodling away on keyboards for the sequel and it’s just fingernails on chalkboards awful.

Webb stated in interviews that he wanted the score to “reflect the kind of music that kids Peter’s age listen to.”

Translation: “I’m being told by Sony that we need to sell more soundtrack albums.”

But what Zimmer and company produced sounds like inferior Horner as orchestrated for a local news station.

The opening track “I Am Spider-Man” plays while the voiceover of a newscast describes a crime in progress so it seems fitting — except the orchestration never changes.

The newscast theme is the Spider-Man theme throughout and it’s wretched — especially as it repeats ad infinitum.

And then these geniuses come up with mumbling voices for Electro set to electronica.

You couldn’t ask for a more grating and monotonous set of musical cues for a movie.

I always think of Zimmer as Jeffrey Jones saying “Too many notes!” in Amadeus.

With Zimmer’s superhero themes, it’s as if he takes elements of his predecessors’ scores and runs them through his “dumbing down/trailer music machine” where they come out as low, wearying “BWAAAAAAHM!” versions of what came before.

Which is the musical equivalent of Orci and Kurtzman’s scripts now that I think about.

With that score and the hiring of those two screenwriting good-for-nothings, as well as the obvious head office interference and its puny efforts to universe build, it’s best this chapter of the series came to a merciful end.