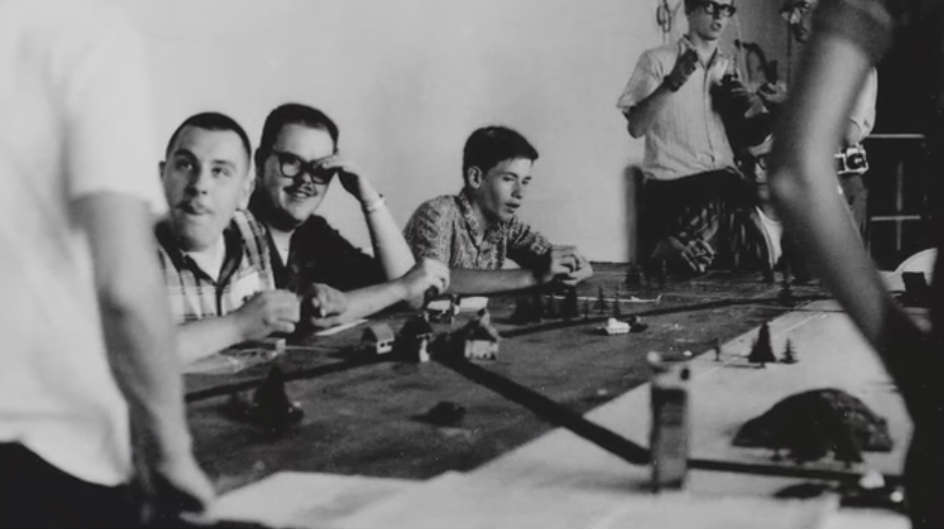 At first Mary Jo Gygax had no reason to believe her young husband Gary was anything but a hard-working family man, who committed much of his spare time to his kids and political volunteerism.

But mysterious late nights with sketchy friends and missed family dinners led her to believe her hubby just might be slipping some Wisconsin salami to some Lake Geneva hussy.

Creeping down the basement steps of one of Gary’s best pals, she steeled herself for the sight of a sexual liaison, but instead found something potentially more terrifying; Gaz and his pals stooped over a table laden with maps and miniatures, recreating some Napoleonic combat or other.

Gary wasn’t a cheating bastard; he was a wargame god.

The Fresh Prince of Lake Geneva

Gary spent his earliest years on the mean streets of Chicago, but when he started showing a childhood proclivity towards gang warfare, the family up and moved Fresh Prince style, but instead of hightailing for Belle Aire, they went for rural Wisconsin.

A high school drop-out, and an uninspired sometimes-college student, Gygax built his strong, professor-like vocabulary by indulging in science fiction and pulp fantasy while working a variety of low-end office jobs. Conan The Barbarian, Lovecraft heroes, and John Carter of Mars were his muses.

Continuing his interest in table top gaming as years rolled by, Gary remained active in the wargaming community, and wrote many articles for wargaming magazines and coming up with his own games. Always yearning for new ways to approach his games, Gary was an early adopter of multi-sided dice, discovered in math teacher supply catalogues. In 1967 he founded GenCon, a yearly meeting of wargame wonks in Wisconsin. Not long after he would produce Chainmail, a warfare simulation with fantasy elements, which would become an early template for Dungeons and Dragons.

Along came Dave Arneson, a Minnesota University history student who also loved wargames. Dave had, for the time, unique ideas about his wargame sessions. Not satisfied with merely simulating exact history, Dave liked to explore alternate histories and outcomes. He was also a proponent of “Braunsteins,” an unpublished wargame notion were non-combat goals were introduced into the rigid wargame rules.

This quickly evolved into the idea of players actually taking on the roles of individuals in the game (commanders, town mayors, community leaders and businessmen) and making non-military decisions outside of game task resolution, almost entirely based on whim. Role-playing, to put it simply.

You might remember playing Monopoly as a kid, and your friends or older siblings wheeling and dealing and negotiating outside the rules. Yep, we were all role-playing landlords and train barons. We were Braunsteining.

Dave expanded upon these games by inventing his game world,  Blackmoor (widely recognized as the first true fantasy role-playing setting), and his sessions deviated heavily from the stodgy, popular wargames of the time. He injected fantasy elements, quests for gold and monster killing, and scenarios lifted from fantasy literature.

You Got Your Dave In My Gary Butter

Dave and Gary came together like chocolate and peanut butter at GenCon 2, bonding over a mutual love of naval-based games.

Not long after, Arneson would adopt Gygax’s Chainmail rules for his games for his personal home campaigns, but also addended it with what would later be recognized as the Dungeons and Dragons tropes that game is known for, including the improving hit points concept, character development from session to session, and most importantly dungeon crawling.

His players tiring of simple castle sieges, Dave filled the basement levels with traps, magic, and monsters, and had them delve beneath rather than breech the upper walls.

D&D is Coming Together

Gary must have loved the Blackmoor games, because he quickly invented his own setting, Greyhawk. Gary and Dave began to collaborate on a unique game combining their games and rules, and Gary wanted to hustle on it as there were other wargamers with similar publishing aspirations.

Unable to find publishers, Gary and pal Don Kaye tapped friend Brian Blume (one of two brothers who would eventually lead to the downfall of Gary’s version of the company) for the moolah, and they were off and running with a first run of 1000 copies. Tactical Studies Rules (TSR) and Dungeons and Dragons were born. It was 1974.

Arneson was not a partner, and most of his rules were not incorporated into that first version of D&D (though the tropes he invented would be), but he contributed a supplement, Blackmoor, and would briefly work for TSR. But he would soon leave to pursue a separate career in game design.

Dave would receive co-writer credit for a brief time, but that was removed with the publication of Advanced Dungeons & Dragons, a somewhat different game. Still, it’s main concepts were all Arneson, and he filed several lawsuits, breaking up the friendship. In 1981 they settled, and Dave received co-creator credit and a royalty sum. This soothed the seething tensions between Gary and Dave, and the old school dorks were friends once more.

The Band is Breaking Up

Dave moved on anyway, and eventually landed a prestigious position at Full Sail University, teaching game design for many years. But he continued his home Blackmoor games, sessions that for decades gamers would beg to participate in. At conventions they often got the chance.

Before long, due to the death of TSR partner Kaye, and a buying of more shares by Brian Blume and his brother, Gary found himself the minority shareholder of the company, effectively more an employee than partner in the company that was fast becoming a huge success despite a variety of negatives.

For one thing, stories both true and false about the game in the media (gamers gone missing and suicides) caused a certain amount of eyebrow-raising scrutiny for the hobby, along with religious tongue clicking (Gygax and his wife actually left the Jehovah’s Witnesses due to pressure within their local chapter).

Also, Gary had become obsessed with playing D&D, and it occupied all of his free time. His longtime love of marijuana, the lure of young snizz his new celebrity afforded him, as well as a growing cocaine devotion, helped finish off that marriage, and Gary and Mary Jo divorced in 1983.

Gary continued to be the face of the popular game. While the Blume family continued to run the game aspect of TSR, Gaz was sent off to Hollywood to get the entertainment division off the ground. In gamer circles, tales of Gary doing copious amounts of blow off of young gals’ tatas while cavorting in hot tubs were legendary. He co-produced the popular D&D cartoon, and worked hard (as hard as you can work while playing D&D 15 hours a day with a coke straw glued to your schnozz) to get a D&D movie off the ground.

The Blumes were back in Lake Geneva having their own party, buying up a fleet of company cars, overstocking the supply cabinets, overstaffing the offices, and believe it or not using company funds to hunt real treasure at the bottom of the sea. Before long, under the leadership of Tweedledumb Blume and Tweedledumber Blume, the three hundy million dollar a year company was several million in debt. Gary, who was close to locking in Orson Wells and John Boorman into his D&D film project, was informed of the Blume’s intention to sell off his beloved company to nix their debt. Spitting out his doobie, and knocking Traci Lords off his junk, Gary boogie-nighted out of his rented Hollywood mansion and hightailed back to the hearth fire in Wisconsin for a little aggressive TCB.

His tussles with the Blumes and attempts to restructure the company could fill a library’s worth of books, but the long and short of it is Gary got things back on track. He helped hire a Hollywood friend’s sister as a business manager for TSR in 1984, perhaps the greatest mistake of his career. Her name was Lorraine Williams, and that name may as well be “Hitler” to many old school D&D fans.

Gary soon learned that Lorraine, though an excellent manager, held D&D players in low regard, and actually belittled Gary about it. Gary tried a Machiavellian move or two, but it was to no avail. The Blumes sold their shares to Williams, and with a cackle and flash of brimstone, she became the true power behind TSR.

Gary eventually said “screw it” and went on to try his hand at new gaming ventures, but like a modern Moriarty, Lorraine stymied him at every turn, eventually owning (through lawsuits most foul) and shelving his promising Dangerous Journeys game system.  Though he would always have his name linked to D&D, Gary would never replicate his original game’s success.

TSR sallied forth without it’s founders. To quell outspoken media critics, new editions of D&D purged Christian and demonic elements, and each such edition grew further towards glossy mainstream fantasy and away from the beloved old pulp novels beloved by Gary. Dungeon crawls became passé. Video games would have a bigger influence on D&D gameplay than dusty old fantasy tales.

Through the late 80’s and into the 90’s, and to Lorraine’s credit, TSR actually thrived despite many poor ideas, such as a Rocky and Bullwinkle RPG that included the use of hand puppets (can you imagine?). D&D remained strong, and expansions into comic books and novels were a success. But it would not last.

TSR over extended itself, and poor sales of things such as an attempt to enter the collectable card market doomed the company.

In short, Lorraine eventually sold out to Wizards of the Coast, makers of Magic: The Gathering, who themselves soon sold out to Hasbro. Dungeons and Dragons, once an underground playground for overgrown Conan fans, was in the hands of the owners of Transformers and My Little Pony. For good or bad.

Both Gary and Dave never lost their love of gaming, and the hobby continued to be the major force in their lives. Dave continued running his coveted weekly home games all the way up to when he died. Over the years many fans would live their dreams of getting to play at the tables of Gary and Dave at various gaming conventions. Gary passed away in 2008, and his old pal Dave died in 2009.