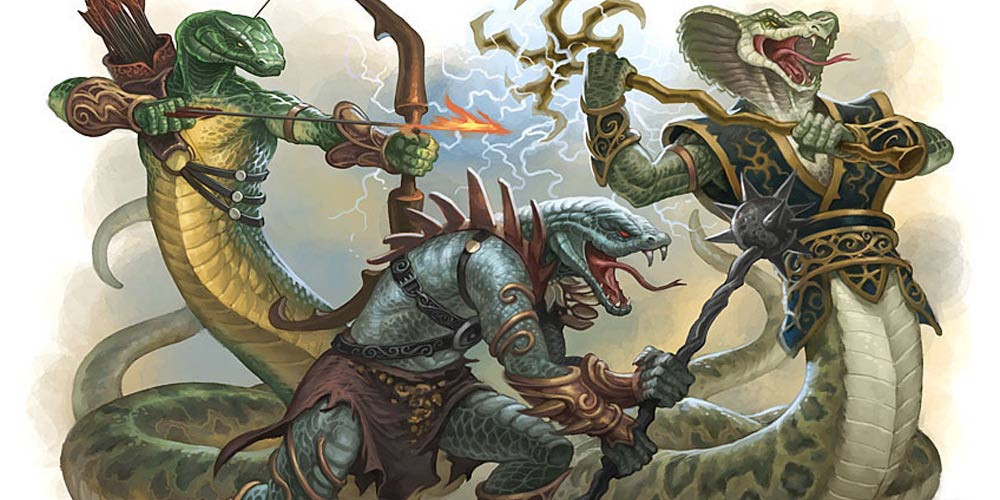 After writing about the Tabaxi race, I decided to take a closer look at another of the 5th Edition Dungeons & Dragons playable monster races in Volo’s Guide To Monsters.

This time I am looking at the Yuan-Ti, specifically the playable Pureblood variant.

In Dungeons & Dragons lore the Yuan-Ti were originally a tribe of humans who were magically blended with snakes by one of the Creator Races, the reptilian Sarrukh.

As humans and the younger races rose in power, and the Creator Races declined, the Yuan-Ti gained control of the Sarrukh’s empire of Mhairshaulk.

Their religious worship has changed over time.

Initially, the Yuan-Ti worshiped Merrshaulk, a cruel despot, as their primary deity, who was later reborn as a winged Yuan-Ti named Sseth. As befits worship of a Demon God their rituals usually involve some sort of bloody sacrifice.

Their ultimate goal appears to be nothing less than the destruction of the entire world, which places them solidly among the Evil aligned races.

Some Sarrukh, returning from their battles on other planes of existence, have created an alliance with the Mulhoranid deity, Set, allowing him to take Sseth’s place.

Few Yuan-Ti are aware of this substitution.

As creatures created by magic, Yuan-Ti have varied appearances. There are three commonly known breeds of Yuan-Ti, though there are other types that are less common.

The three common types of Yuan-Ti are the Abomination, the Halfblood, and the Pureblood.

The Abomination are generally the highest caste in Yuan-Ti society, and their appearance is believed to be the closest to the form originally conceived by their creators.

In appearance, they look like giant snakes, with a humanoid torso below the head.

The Halfblood is humanoid in form, but manifested a variety of features such as a snakelike head, a tail, or snakelike arms. These are physically the most varied of the Yuan-Ti castes. 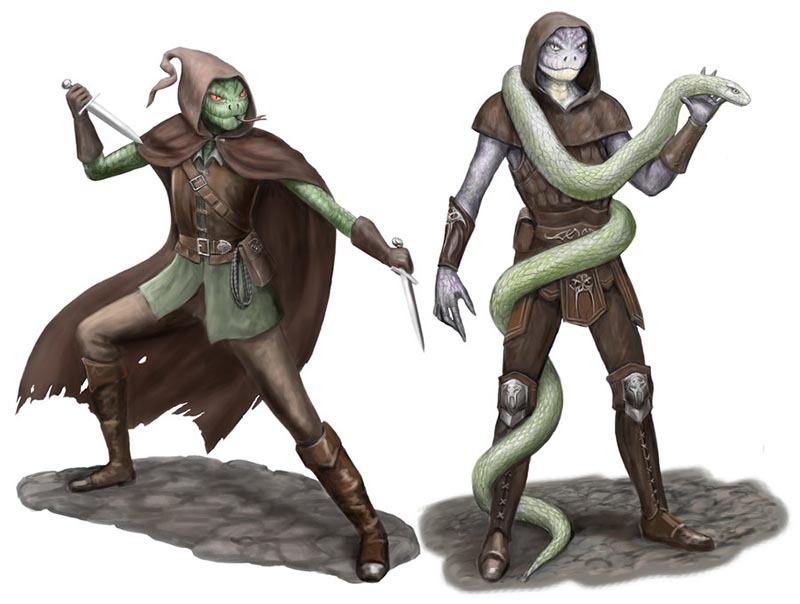 The Pureblood, the lowest Yuan-Ti caste, appears human, for the most part, although may be distinguished by patches of scales, reptilian eyes, or a forked tongue. The human appearance of the Yuan-Ti Pureblood allows them to be the negotiators for their people when dealing with other races. They are also the only variant playable as a character race.

Yuan-Ti Purebloods come with some very strong abilities as a player character.

As stat increases they have +2 to Charisma and +1 to Intelligence, biasing them towards the magical classes, high Charisma also benefiting the character in non-battle related roleplaying and character interactions.

They have Darkvision, which allows them to see as though it were brightly lit in dim light and as though it was dimly lit in darkness, with a 60 foot range. In darkness they can’t see colour, only shades of grey, but it is still an extremely useful ability.

They have Innate Spellcasting, allowing them to cast the Poison Spray cantrip. They can also cast Animal Friendship any number of times, but only on snakes. From 3rd level they can also cast Suggestion once per long rest. Charisma is the casting stat for these spells.

With Magical Resistance they also have advantage on saving throws against spells and other magical effects. This is an extremely powerful ability in game as it means for any save against magic the player rolls two dice and picks the highest, and being placed on disadvantage will only drop that roll to a single dice, not, as normal when on disadvantage, rolling two dice then taking the lowest score.

They also have Poison Immunity, making them immune to poison damage and the poison condition. While it appears thematically appropriate, the ability to ignore an entire block of conditions and damage is again very strong.

The question does have to be asked, “When does a strong player race become ‘too strong’?” and Yuan-Ti are certainly an upper-tier option, but I don’t think they’re game-breaking.

With their stats and abilities, Yuan-Ti Purebloods obviously favour the casting classes and especially the Charisma-based casters.

They would make great Sorcerers, Warlocks, Bards, and to a lesser extent Paladins. They can also play the Intelligence-based Wizard.

Thanks to the Forgotten Realms Wiki.