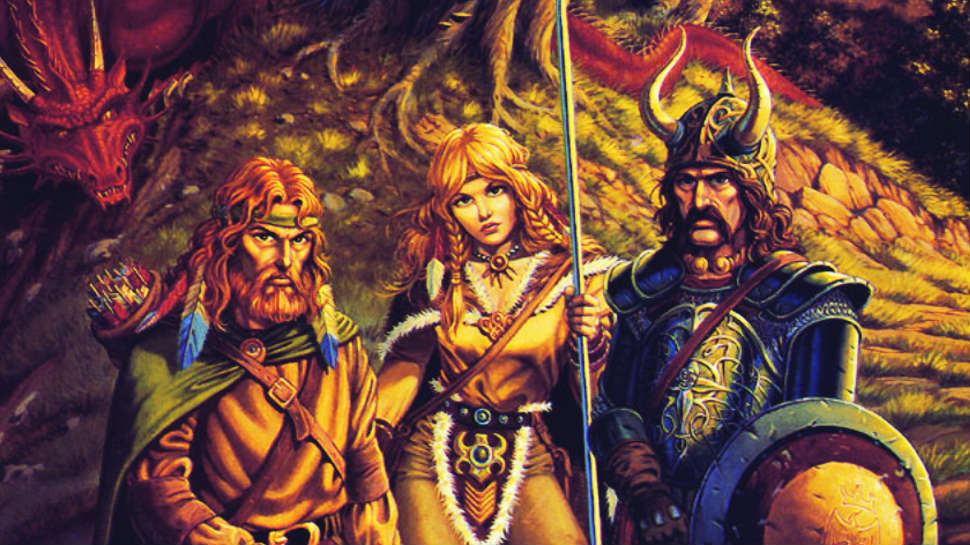 In 1981, Tracy Hickman and his wife Laura Hickman were driving from Utah to Wisconsin so Tracy could start a job at TSR, the company that made the Dungeons & Dragons products, they began talking about how for a game with “dragons” in its title there weren’t enough products with actual dragons in them.

It was right there that an idea came to his mind about a world ruled by ancient dragons and dragon overlords.

Hickman – with the help of his boss, Harold Johnson and artist Larry Elmore – immediately began working on this secret project in his spare time.

They called it “Project Overlord”.

After many months of development Project Overlord was presented to the brass at TSR where it was approved. Under the brand label of Dragonlance a series of twelve game modules were planned, as well as a calendar and a trilogy of novels. The novels were originally to be written by an outside writer, but due to dissatisfaction with the work presented were given to Hickman and the editor Margaret Weis to write.

This trilogy would be called The Dragonlance Chronicles. These novels would follow the same story presented in the AD&D game modules, which expanded from twelve to sixteen modules due to popularity.

The story covered in these modules and novels is commonly referred to as the War of the Lance. I’m not going to write a typical review of these products except to say they are great. I’m going to discuss my some basic plot details and talk about the characters in this story. I don’t want to spoil anything to people unfamiliar with it, but give enough information to possible entice you into reading it.

The story takes on the world of Krynn on the continent of Ansalon, which is similar to Greyhawk and other typical D&D worlds in most respects. There are a few differences though and I will cover a few of the more important ones here.

First, there are no Orcs, Drow or Halflings in this world at all. The term “Drow” is used to describe an evil, subterranean race of elves.

Halflings have been replaced by Kender, a small race of humanoids that are essentially kleptomaniacs that like to wander and get into trouble. However, they don’t actually realize that they are kleptomaniacs and honestly believe that the things they “borrow” were “dropped”, “lost” or some other reason that doesn’t implicate them in theft at all. They use a weapon called a hoopak that is pretty much a staff sized slingshot.

Dragons haven’t been seen or heard in many centuries and have fallen into the realm of legend. Most of the knowledge about these beasts has been lost to the sands of time. Chromatic dragons (white, green, blue, black, red and green) are still evil and metallic dragons (silver, gold, bronze, copper and brass) are all still good.

A few centuries before the story begins a Cataclysm occurred. The Gods dropped a fiery mountain upon Ansalon to punish the people for their arrogance and pride. The presence of the Gods has not been felt since. No clerics exist during this time.

There are three orders of the Wizards of High Sorcery, the only organization that is authorized to use magic in Ansalon.

Good wizards wear white robes, neutral wizards wear red robes and evil wizards wear black robes. The strength of their magic is impacted by the positions of the three colored moons, which match the corresponding robe color of their magic-users. A test of magical aptitude must be taken in order join this organization. Those that fail this test, die.

Finally, there is a group called the Knights of Solamnia. They are a strict order of good men that adhere to their knightly code.

War Of The Lance

Five years before the beginning of the story a group of companions went their separate ways to try to find proof of the Gods. They plan to meet up a tavern after the five years have elapsed to share tales of their adventures as well as any evidence of the Gods they have uncovered.

Tanis (Half-Elf Ranger) – Leader of the group. Weis and Hickman modeled him after Captain Kirk from Star Trek. He is conflicted about his human and elven heritage, which manifests itself in a love triangle between him and a woman of each race.

Tasslehoff Burrfoot (Kender Thief) – Tas is a well-meaning troublemaker whose curiosity often gets him and his friends into various amounts of trouble. He’s the heart of the group and provides a lot of the comic relief during the course of the story.

Flint Fireforge (Dwarf Fighter) – An old hill dwarf that likes to complain and kill things with his axe. He’s just like Danny Glover from the Lethal Weapon movies, except he’s white and a dwarf.

Raistlin Majere (Human Wizard) – A sickly and physically weak human who wears the red robes of the Wizards of High Sorcery. Although he passed his test it left his body in ruins.  He has white hair, a frail body, golden skin and hourglass eyes that show him the effects of time on all things. He is cold, calculating and obsessed with increasing his magical power. He is pretty much an asshole to everybody he interacts with.

Caramon Majere (Human Fighter) – Raistlin’s twin brother. He’s a big, dumb fighter that likes to get drunk and hit on tavern wenches. He’s the opposite of Raistlin in every way.

Kitiara Uth Matar (Human Fighter) – Caramon and Raistlin’s beautiful half-sister and daughter of a disgraced Knight of Solamnia. A great fighter that is a lot closer in personality to Raistlin than she is to Caramon.

Sturm Brightblade (Human Fighter) – An honorable man and member of the Knights of Solamnia that looks like he should be playing 3B for the 1972 Oakland Athletics.

With the exception of Kitiara, all of the companions arrive for the reunion. Almost as soon as they get together thing begin to change on Krynn. The heroes are whisked into adventure when: the dragons return, the Gods return and Draconians, a race of evil dragonmen, are unleashed upon Ansalon. Along the way the group of heroes adds a few more to their group in their quest to defeat evil.

Goldmoon (Human Cleric) – The first person to be granted clerical abilities when the Gods return to Krynn. Healing the wounded is her main role. She has silvery blonde hair and is part of a barbarian tribe.

Laurana Kanan (Elf Fighter) – Laurana is the childhood friend of Tanis and is an Elven princess. She starts off as a whiney brat, but evolves into a skilled soldier and a great hero over the course of the war.

Thoughts On The Novels

I am a huge fan of this book series and a huge reason for that are the characters, which I have loved for over thirty years. All of the characters have moments to shine, but the stars of this series are Raistlin and Tas.

From a villain’s perspective, Chronicles delivers in spades.

Besides the dragons, there are also the Dragon Highlords. These villains are Dragonriders; commanders of the dragon armies and Draconian forces. The Blue Dragon Highlord is the greatest of these and the only female.

One other villain in this series is iconic and that is Lord Soth. A former Knight of Solamnia that turned to evil and was damned for eternity torment the living as a Death Knight (he’s the Darth Vader of this series). Luckily both Soth and the Blue Dragon Highlord survive this series and appear in the subsequent trilogy Legends.

The Chronicles series has a lot in common with Tolkien and other fantasy, but in the post Star Wars world of the early 1980s it spiritually feels closer to that material.

The first book Dragons of Autumn Twilight is similar to the original Star Wars (NEVER “A New Hope”) in that it introduces the main characters and tells a complete story unto itself.

The next two books in the trilogy are similar to Empire Strikes Back and Return of the Jedi from a structure standpoint, in that the second book Dragons of Winter Night ends with cliffhangers that are resolved in the third book, Dragons of Spring Dawning.

The books in this series are fun and entertaining above everything else.  They aren’t high literature, but a product with good story with good characters written to appeal to young people that played AD&D and fans of the fantasy genre.

Thoughts On The AD&D Game Products

The AD&D modules are well designed, but not as well remembered as the Chronicles novels. This is likely due to the fact that they tell the same story with the same characters as that found in those books.

The DragonLance Adventures AD&D hardcover [Buy at Amazon] is a great book with a lot of great information on the world building related to Krynn in a set of rules and game mechanics.

There were a lot of books written in the DragonLance line after Chronicles — probably around 100 if I had to guess. If you read Chronicles and wanted to continue on, where should you go next?

I would recommend that you move onto the Legends trilogy. This series revolves around time-travel, so it is more Back to the Future than Star Wars in feel, but contains the continuing story of many of the characters after the War of the Lance.

The books outlined above have millions of copies (over three million for Chronicles alone), so why has a high-quality movie or TV adaptation not been produced?

Beats me, but with a large fan base, a great story and characters, a complete story (looking at you, Geroge R.R. “Tubby” Martin) and a ton of amazing storyboards in the form of paintings by Larry Elmore and Clyde Caldwell it seems like a no-brainer.

Since nobody asked me, here’s what I think is the best way to go about producing this material. First make it a series on a network such as: Netflix, Amazon or Showtime. Then do 6 chronological seasons, 12 episodes a season covering a book and a half in each one.

Season 1: All of Autumn Twilight and half of Dwarven Depths

Season 2: Half of Dwarven Depths, half of Winter Night and half of Highlord Skies

Season 3: Half of Highlord Skies, half of Winter Night and half Spring Dawning

Season 4: Half of Spring Dawning and all of Hourglass Mage

Season 5: All of Time and half of War

Season 6: Half of War and all of Test

Make it a faithful adaptation.  Don’t race swap, don’t gender swap (Tasslehoff might work with a girl playing him, but the character should remain a boy), don’t make it grimdark.

People like this series. It isn’t broken,  so don’t fix it. Makes sense, right?

Right. That’s why it will never happen.

Read my previous Rolling Nostalgic column about my introduction to Dungeons & Dragons.