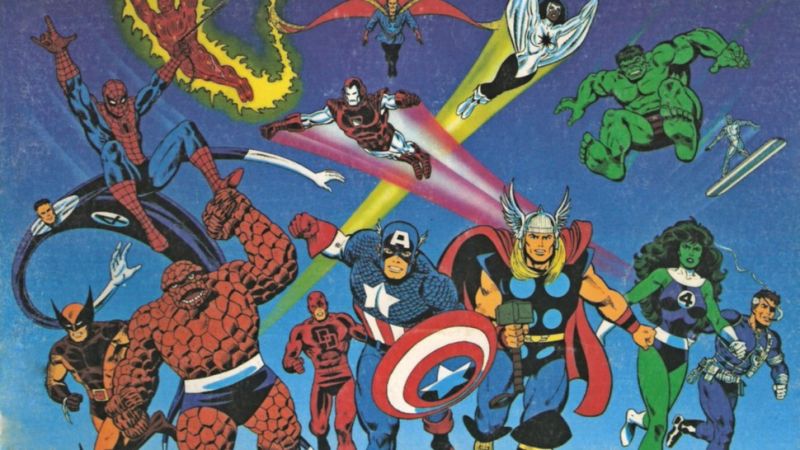 One of the best product lines that wasn’t named D&D was the Marvel Super Heroes roleplaying game. Simple to play and with great artwork by star artists such as John Byrne and Sal Buscema the products really had a “Marvel” feel to them.

This game had a simpler set of rules than D&D, which based on percentages. You had FASERIP (Fighting, Agility, Strength Endurance, Reason, Intuition, and Psyche) ability scores and a grid to determine success.

For instance, say that Spider-Man had an Amazing Strength score and the Thing had a Strength score of Monstrous, it would be easier for the Thing to lift something because the percentage roll has to be higher than the success number on the grid table.

The Basic Set came with a lot of good stuff in addition to the rules and dice (standard TSR box set fare) including: an adventure called Day of the Octopus, a map of NYC and 8 character cards.

Beyond the Basic Set was an Advanced Set that had some additional rules, such as Karma, which were points you could spend to increase your odds of success.  However, the highlight of this set was that it came with stats for a lot Marvel Heroes and Villains that you could play with. They later expanded this concept into books for character lines such as the Avengers and X-Men.

Rounding out the product line were adventures, which looked like standard D&D adventures from this period (paperback, around 32 pages and black and white paper). They were interesting story-wise in that they usually gave you a story that hadn’t been put forth before in the comics. For example, the Murderworld adventure featured the Fantastic Four going up against Arcade, who was mostly a X-Men villain.

I had a lot of products from this line in the 1980s, which are long gone for the most part. I have parts of the box sets, but nothing is complete. Thanks a lot, 12-Year-Old-Me — you dummy.

If they reissued this the way that AD&D got a reissue a few years back I would likely pick it up as this was is nostalgic sweet spot for me (comics and RPGs are my chocolate and peanut butter).