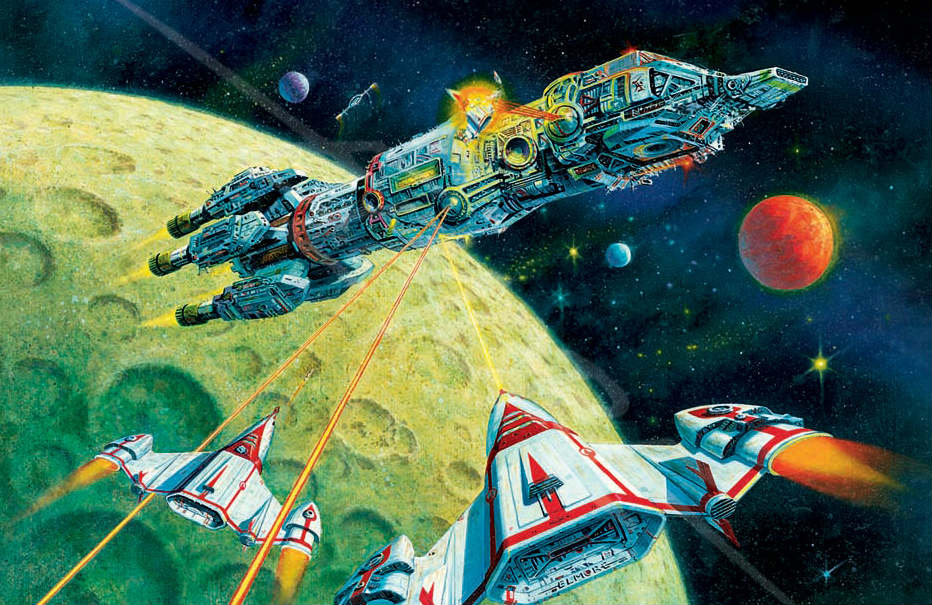 In the early 1980s TSR was really starting to make some noise in the realms of pop culture. The AD&D rulebooks, which were published at the tail end of the 1970s, sold very well. So did the Basic D&D Set (Erol Otus version). This allowed TSR to branch out into new arenas.

They hired more professional artists, including Larry Elmore, Clyde Caldwell and Keith Parkinson for their products. A cartoon show based on D&D was produced for Saturday morning broadcast. With the Star Wars craze in full swing TSR decided to go after a slice of that space opera pie.

Although TSR had Gamma World, which was a post-apocalyptic sci-fi game with a Mad Max feel, they didn’t have a product to capitalize on the popularity of Lucas’s brainchild. Enter Star Frontiers.

Published in 1982, it had a more simple game play system than the D&D products. Instead of using a lot of different faceted dice, it used only two 10-sided dice for percentiles, which was very similar to the FASERIP system later employed for the Marvel Super Heroes game, which TSR published in 1984.

Star Frontiers also had TSR go big, bigger than they had ever gone for a new, untested product. With polished Larry Elmore cover artwork that seared itself into the brains of the kids that saw it and a television commercial to promote this new game, a message was being sent: TSR makes the games you need to play.

The first box set, simply called Star Frontiers (later renamed Alpha Dawn) contained only 4 playable species. First, there was Humans, because what would a TSR game be without humans? Next we had the Dralasites, these were sort of like sentient amoeba creatures that consumed their food via absorption and cracked wise via bad puns. Next up were the Vrusk, an ant-like race that had a Vulcan vibe about them. Lastly were the Yazirians. These creatures ape-like beings were basically Wookies with wings.

In addition to the species featured, the first box set included rules for land based combat and encounters. The second box set, Knight Hawks, introduced spaceships and space combat to the game.

Over the next few years TSR would publish several adventures and a referee screen. In 1985, the very last Star Frontiers product, Zebulon’s Guide To Frontier Space, was published. This book introduced new races to the game including the Ifshnit, a race of space dwarves, a kangaroo race called the Humma, and a race of intelligent robots known as the Mechanons.

Why did TSR kill Star Frontiers after 3 years? Surely, it must have been poor sales, right? Possibly, but more likely it was killed to make way for a Buck Rogers RPG game that is now completely forgotten. Why would a company kill off a popular product to make a new game based on a license that the target audience probably didn’t give a rat’s ass about?

In 1928, a guy named John Dille syndicated a new comic strip named Buck Rogers, eventually gaining complete ownership of said character. Guess whose granddaughter was the president of TSR during the 1980s? You guessed it. No, it wasn’t Kathleen Kennedy. It was actually Lorraine Williams, President of TSR and member of the Dille Family Trust. I’m probably being silly, nobody in real life uses a position of power to make business decisions that benefit themselves over the company. That only happens in the movies, right? Regardless, that Buck Rogers game tanked harder than Battlefield Earth starring Mr. Barry Pepper. It also caused poor Twiki to blow a gasket.