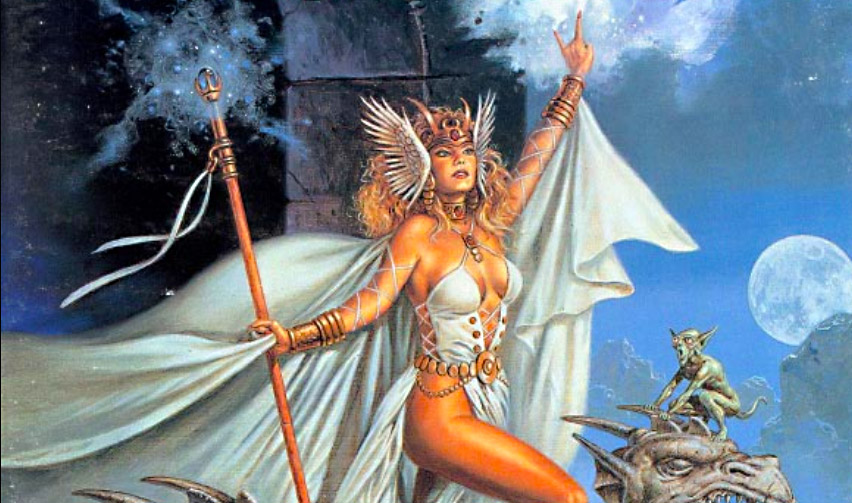 Inspired by Ben McVay’s great work highlighting fantasy art in Rolling Nostalgic, I sat down to see if I could find ten good Dragon Magazine covers that featured female characters.

The first thing I noticed is how many women have appeared on the cover of a magazine usually associated with socially-awkward, nonathletic, scruffy guys arguing over the effects of a Growth spell on encumbrance rules.

I know, i know… not you and your crew.

I get that it’s a prejudicial, pop culture stereotype but to say there is a dearth of female dice-rollers would be an understatement on par with when Jeffery Dalhmer mumbled: “I really messed up this time.”

The second thing is that most of the covers with women on them are trash. Just garbage-tier. Or eye candy for 12 year olds.

To me the best Dragon covers tell a story. It’s not just a cool pose, bad-ass gear or even the art work alone. There has to be something going on inside the frame.

Of course, to qualify for this list it has feature a female character, either alone or as a significant focus of the cover.

Additionally, I really tried to avoid cheesecake. By no means am I pearl-clutcher but I figured it undermines the whole angle of the article to have legs and breasts falling off the covers. Would sort of confirm the stereotype about us, wouldn’t it?

So basically, be dramatic or at least interesting, be a woman and don’t show too much unnecessary skin. 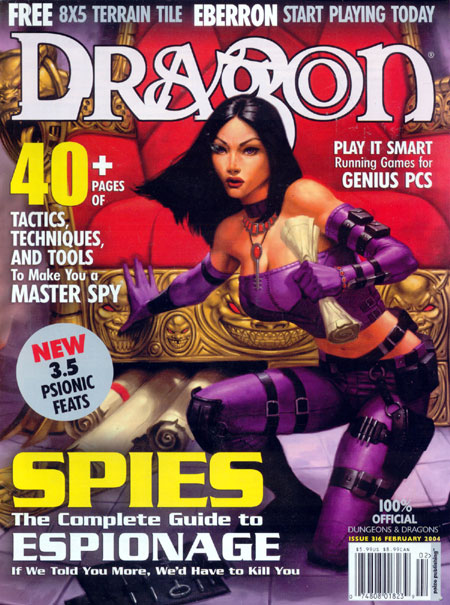 An Elvish (half?) rogue gets surprised while pillaging a secret compartment under the throne of some evil Joker-type ruler/insanity-god/demon-king.

I thought this might have been a non-D&D setting because her gear looks straight-off of Top Secret or Shadowrun but there is only Forgotten Realms content in the magazine around the “Spies” concept.

Note the thieves’ tools almost being covered up by the Maxim-size text. This cover should be much higher but the get-up is just way too modern for me. 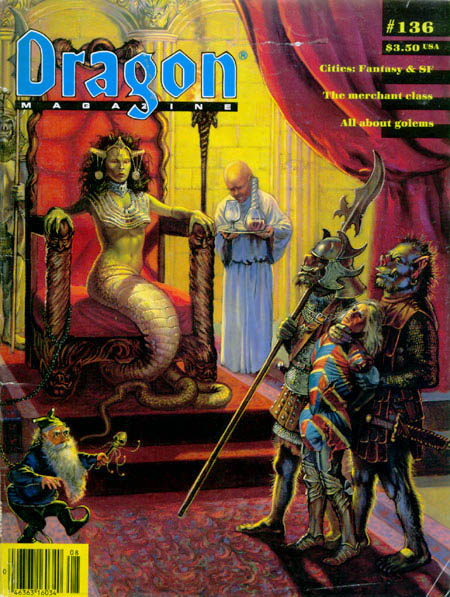 A captured cavalier is brought before a lamia queen by what looks to be some pretty standard-issue orcs. I count at least three races that she has enslaved. This cover would rank much higher but the art is not really Dragon-caliber in my sourcebook. 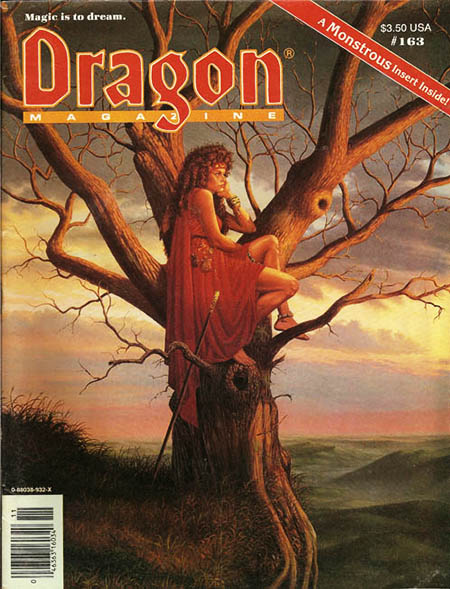 There isn’t much going on here; just a wizard is a tree contemplating the universe while the sun sets. Still, it’s a nice idyllic painting. You wonder who she is and what she’s thinking about. Wish I could get some more details on what kind of staff that is. 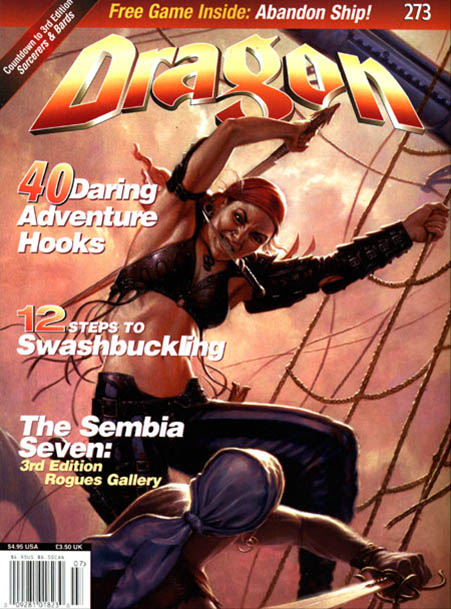 Some kind of rogue kit — pirate, swashbuckler, etc — up in the rigging fending off a no-good scallywag. Good emotion in her face. A lot of these female covers look like the artists were using mannequins as inspiration.

Note the manica on her right arm. At least I think that is what that is called; if not, correct me in the comments. By the way, he doesn’t have a chance — she has the high ground. 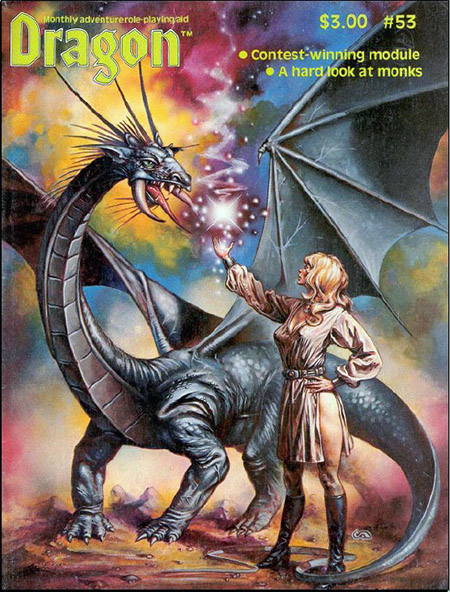 An illusionist (sorceress?) entertains or enthralls an immature blue dragon. Not much drama on this cover but it’s fantastic art: the detail and colors really make it work and it gets you asking, “What exactly is going on here?”. And, Conjurer… love your boots. 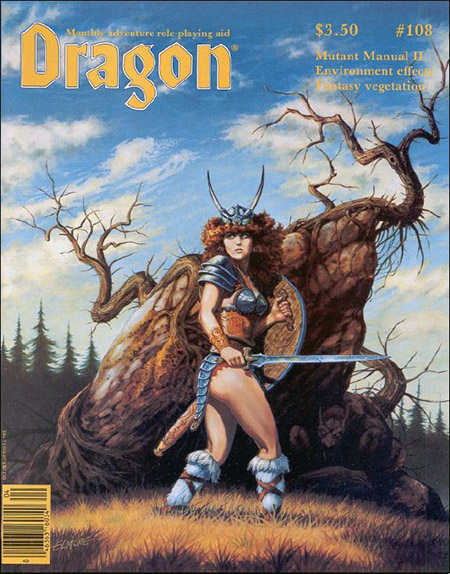 A fighter in light plate, wary as she approached the edge of the forest, fails her Perception check badly. What kind of demon-dog is that? Hellhound?

Does this woman look a little bit like Tika Waylan from DragonLance? 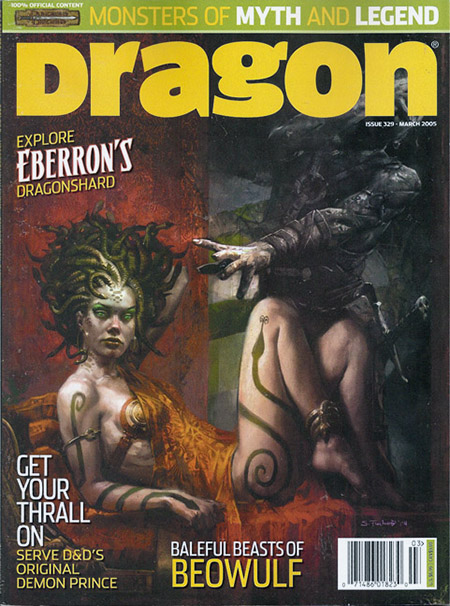 Standard Medusa motif here but the style is very fresh and evocative, especially for this era of Dragon when a huge amount of the cover was hogged by Cosmo-tier impulse-bait. I would consider putting something like this on my wall. 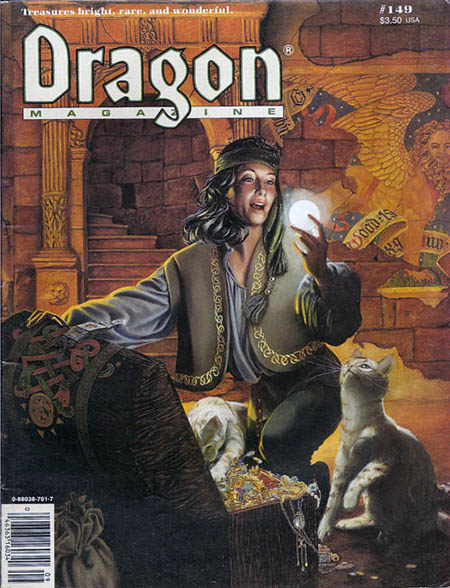 OK, so not all cat-ladies are an evil. 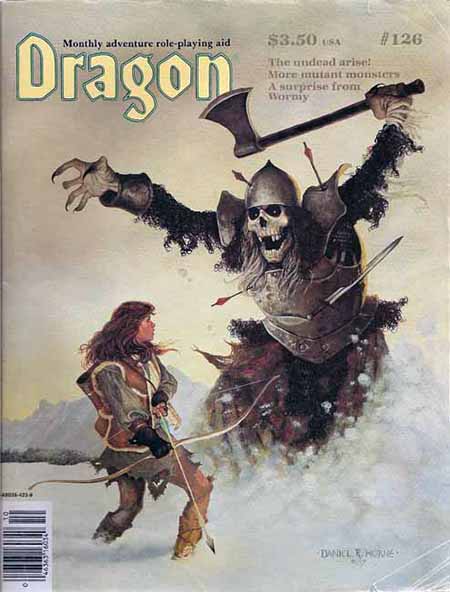 An interesting fight here. She’s got three arrows in this monster but it’s not going down. She’s down to her last arrow which, by the different color of the fletching, looks to be magical. It better be Of Undead Slaying.

Not that it matters, it’s closed the distance and she is toast. I guess this fighter (ranger?) doesn’t know that you need to use blunt weapons against giant armored skeletons.

And that’s not her sword — no scabbard. 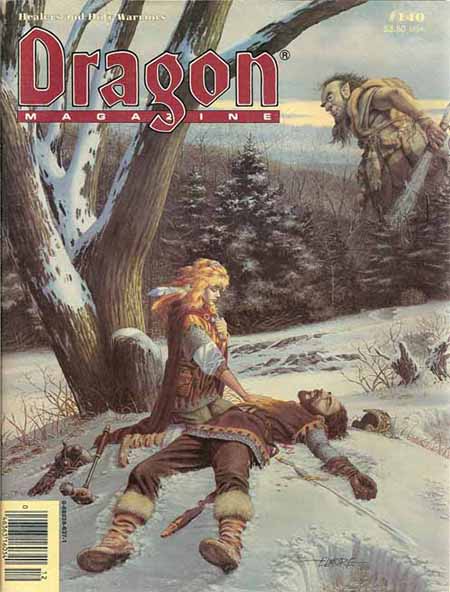 Dude stepped up and got retk! But she’s got his back. Definitely a cleric, check the warhammer; let’s hope she is at least 10th level.

What kind of giant is that? Way too big to be a hill giant, right? Bigger giants usually have crafted weapons, don’t they? Is the big fella going back to nature with that tree-club?

There you have it. After writing the article I’m not sure about the exact order but these are definitely the best Dragon Magazine covers featuring women.

Maybe I will do a top ten worst covers with ladies on them, or top twenty considering the overall quality.

If you’ve got any other ideas for top ten Dragon covers (or anything else you’d like to see at Rolling Nostalgic) please let me know in the comments below or over on the Film Goblin Facebook page.