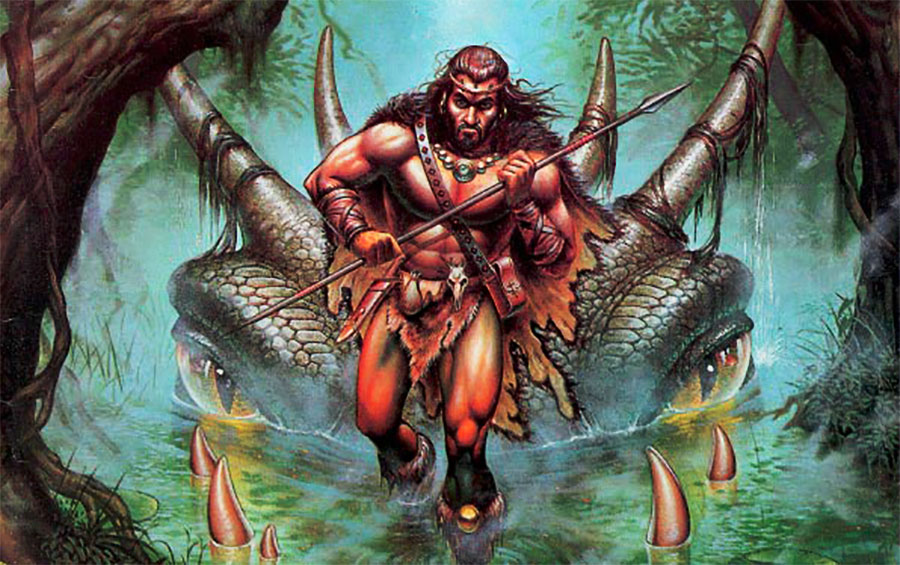 To me, the best Dragon covers tell a story. It’s not just a wyrm breathing fire, an armored knight on dragon-back or even the artwork alone. There has to be something interesting going on inside the painting.

Of course, to qualify for this list it has to feature an actual dragon in some official sense of that concept. No dragonspawn, no dragonkin, no Draconians!

From those nearly four dozen covers I pick 25 to move into the finals before I chose the ten I’ve prepared for you here. What I’m saying is… it was a lot of work. 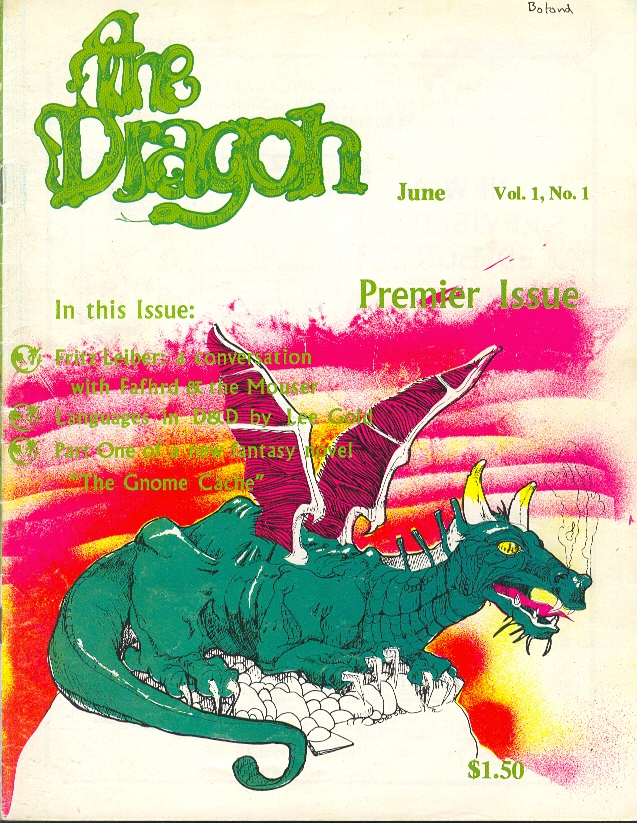 That dragon isn’t going anywhere with those wings. What’s with his eyes? Jaundice?

Anyway, like my old boss used to say “Don’t let best get in the way of better.” 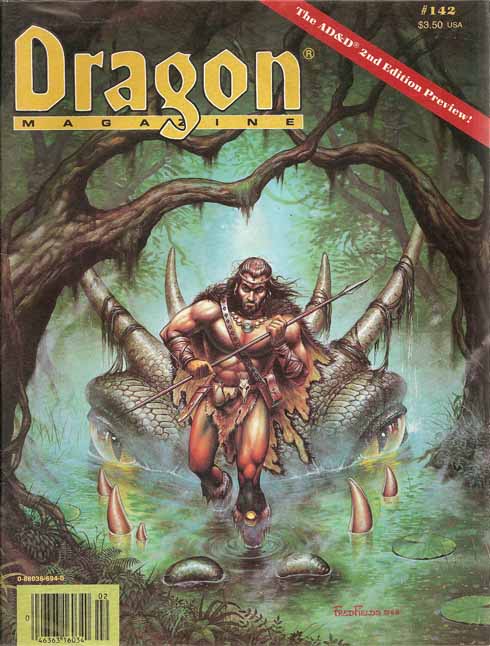 A great cover. But wait a minute… how is that barbarian dude walking across a dragon’s snout and not noticing it? In that direction? At this time of year? In this hemisphere?

It makes absolutely no sense. I guess that would be another rule: “Don’t be dumb.” 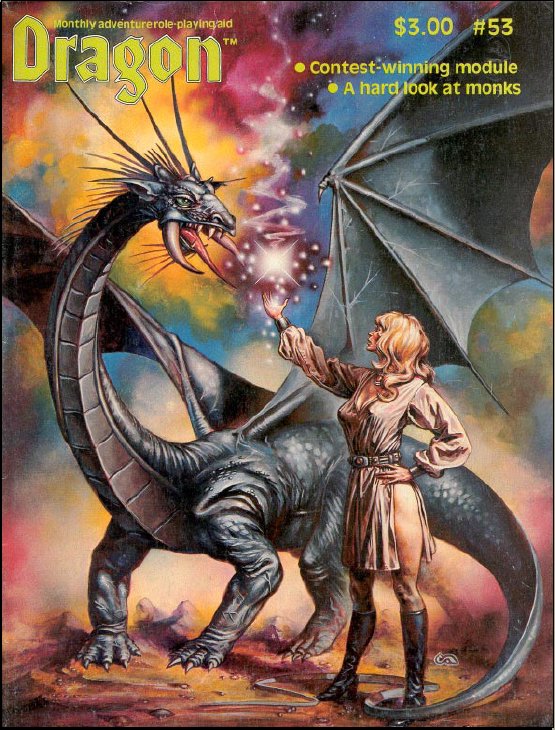 This near-perfect cover was already featured in my Women Of Dragon Magazine article from a few months ago.

The Illusionist class is certainly something I miss from 1st edition. What an oddball character type… but nevermind… here we go… 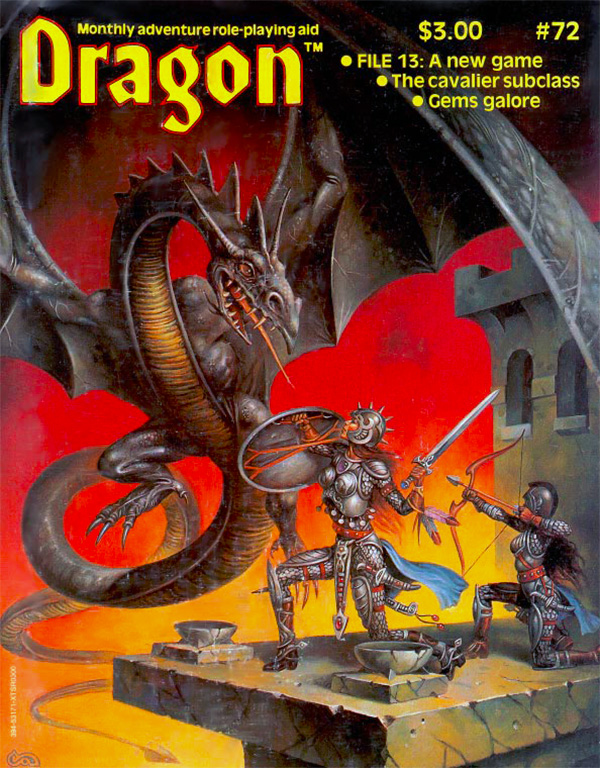 This looks like an illustration straight off the cover of an Adventures Of Lone Wolf book.

I’m not sure how well that scale mail is going to go against the acid breath of that black dragon. But it sure does look great. 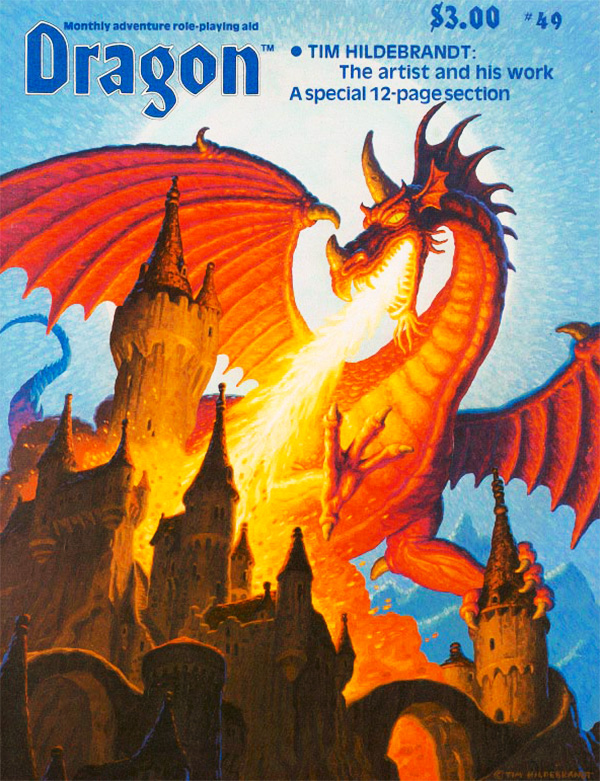 Tim Hildebrandt not just took the cover of #49 but also had a 12-page insert that exclusively featured his artwork.

This is not a normal dragon here; what is the size of that thing? How many hit dice? 400? 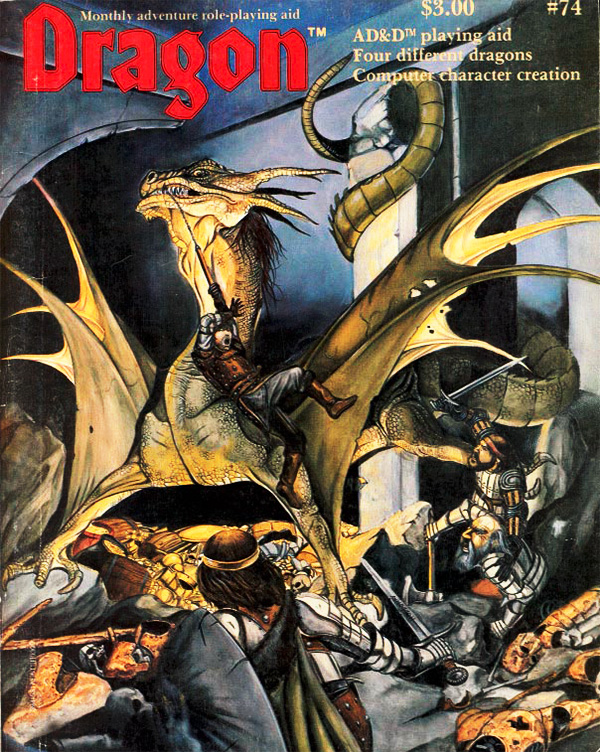 This art isn’t great but it makes me very nostalgic for some of the illustrations in the 1st edition books. Looks like these fighters are screwed going up against this relatively small gold dragon. Dude’s got his flail caught in that thing’s mouth! 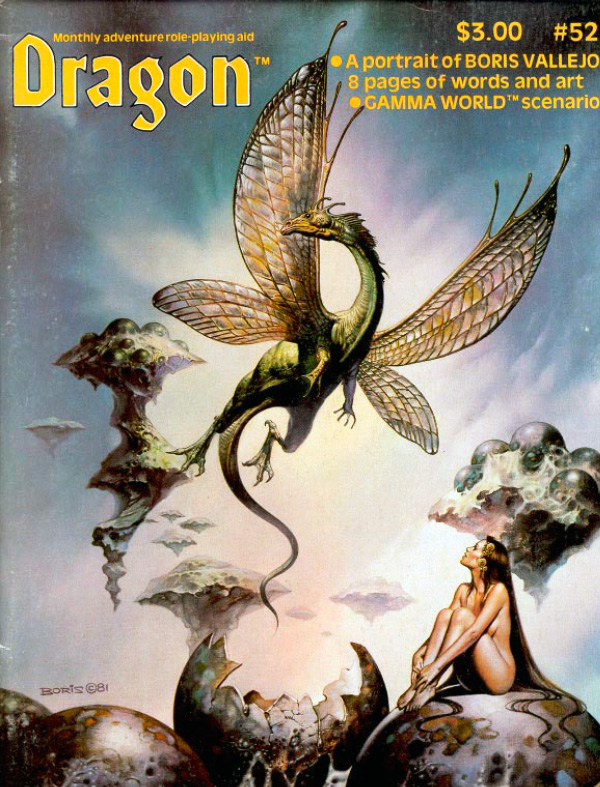 I guess I broke my own rules, didn’t I? But then again, Dragon magazine breaks D&D rules all the time, about everything. I have no idea what this creature even is — a Gossamer Dragon? Sounds good to me.

Is that sexy nymph its owner? Its mother? Is she The Mother of Dragons?

Notice the endless Matrix-like Egg Fields in the background. A really incredible painting by possibly the top fantasy artist of all time. 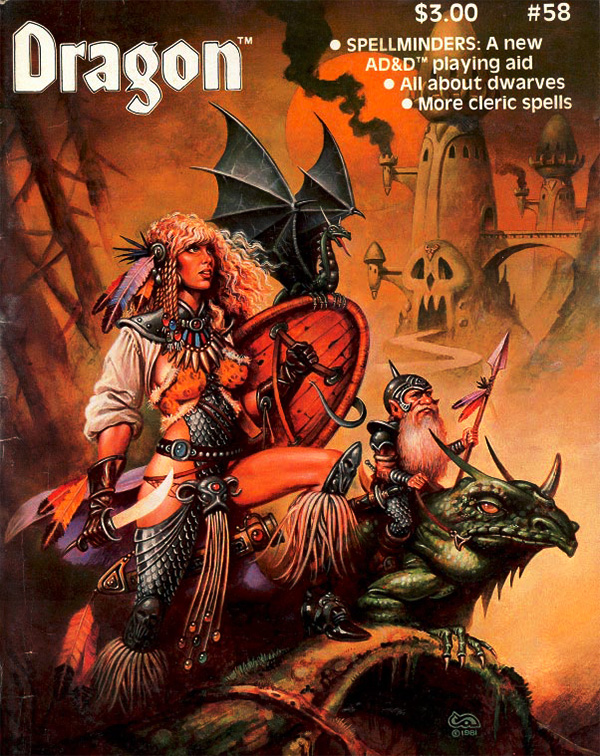 This is one of those classic Gone Venturin’ motifs, where everyone is looking into the middle distance and thinking “East for The Beast!”

OK, so there is not much going on here in terms of action but it just looks great.

It’s got this nice pretty lady in the foreground in scale mail with shield and dagger. What is she? If she is a fighter then where is her big weapon? Maybe that is her sword and the angle is just weird because… look at the size of that scabbard!

Then you have her little gnome buddy on his giant lizard thing. He’s ready to go. Lizard thing don’t look too happy though.

In the background is a spooky-looking castle that is so full of monsters and baddies that they don’t even need a gate on the entrance.

Plus there is a tiny black dragon. 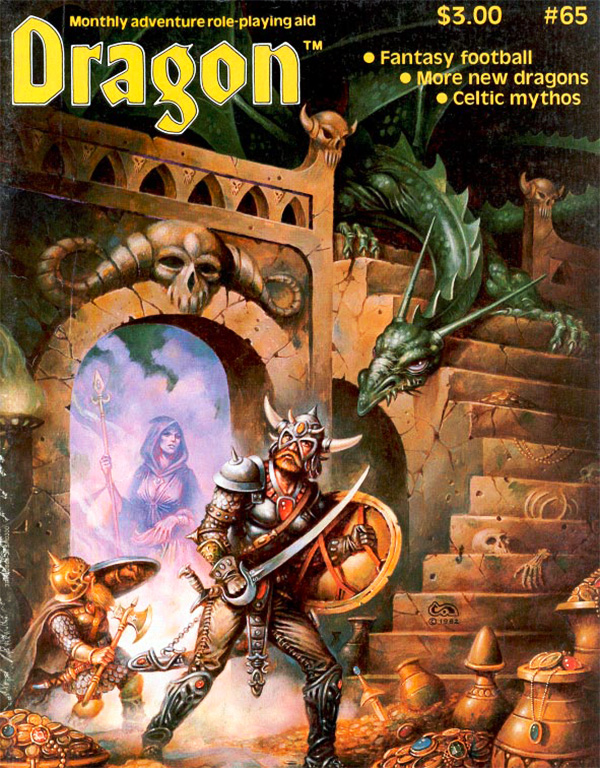 What is it with this Caldwell guy and all the scale mail? 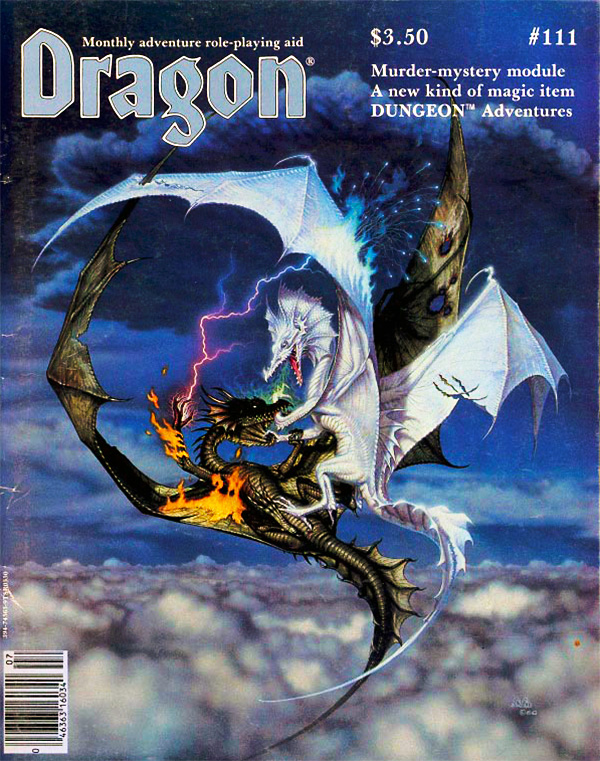 This is just a beautiful cover. But again, where are the rules? A black dragon is shooting purple lightning out of her hands? A white dragon with a green, glowing fire-fist? 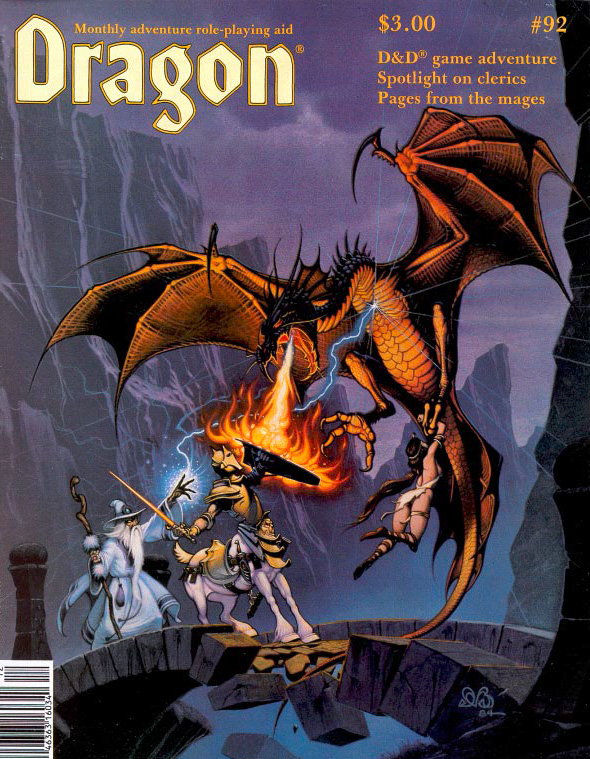 I really can’t believe this is the same artist as #4 on this list. This looks like something out of the first regular D&D boxed set. It has an almost anime feel to it. I love this style.

The motif is also great: Gandalf on another collapsing bridge, a damsel in distress and a centaur! That’s a half-man, half-horse for you 2nd Edition Pathfinder players. 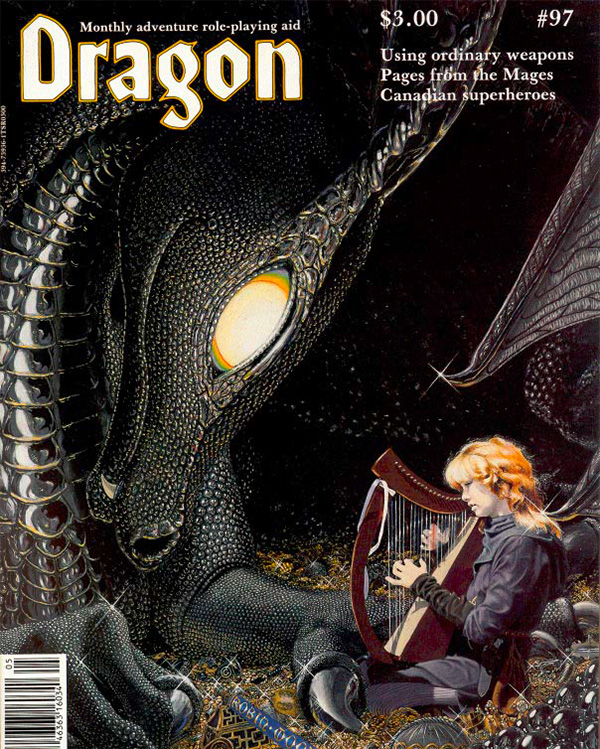 What a gorgeous cover. The detail is exquisite. The color is rich. And the scene itself is so intriguing. It reminds me of a Rennasaince painting by one of the masters.

Notice where the artist’s name is. 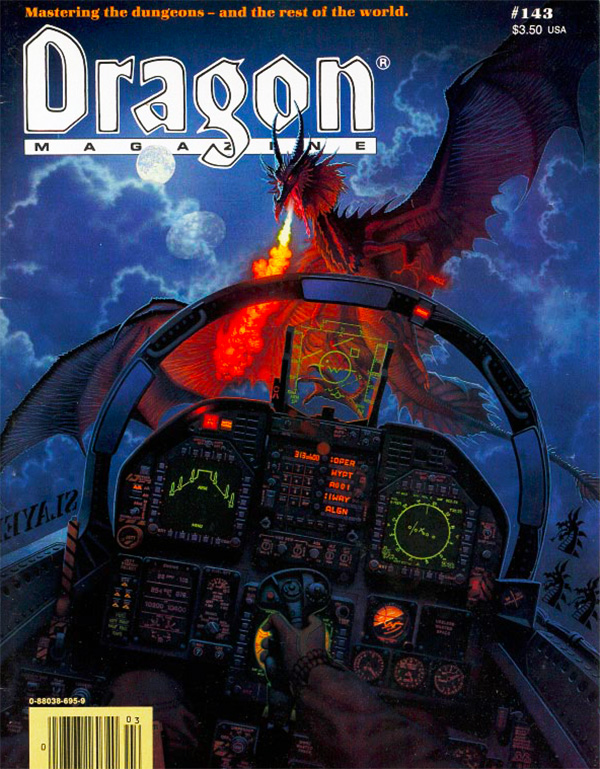 This is pure badassery. Just some stick jockey in his F-16 taking down red dragons and all that that entails. Fly casual!

His call sign is “Slayer” and he’s already bagged some tails.

Now my day is complete. If you have different Dragon covers with dragons on them in your top ten let me know below.

And of course, If you’ve got any other ideas for top ten Dragon covers (or anything else you’d like to see at Rolling Nostalgic) please let me know in the comments below or over on the Film Goblin Facebook page.