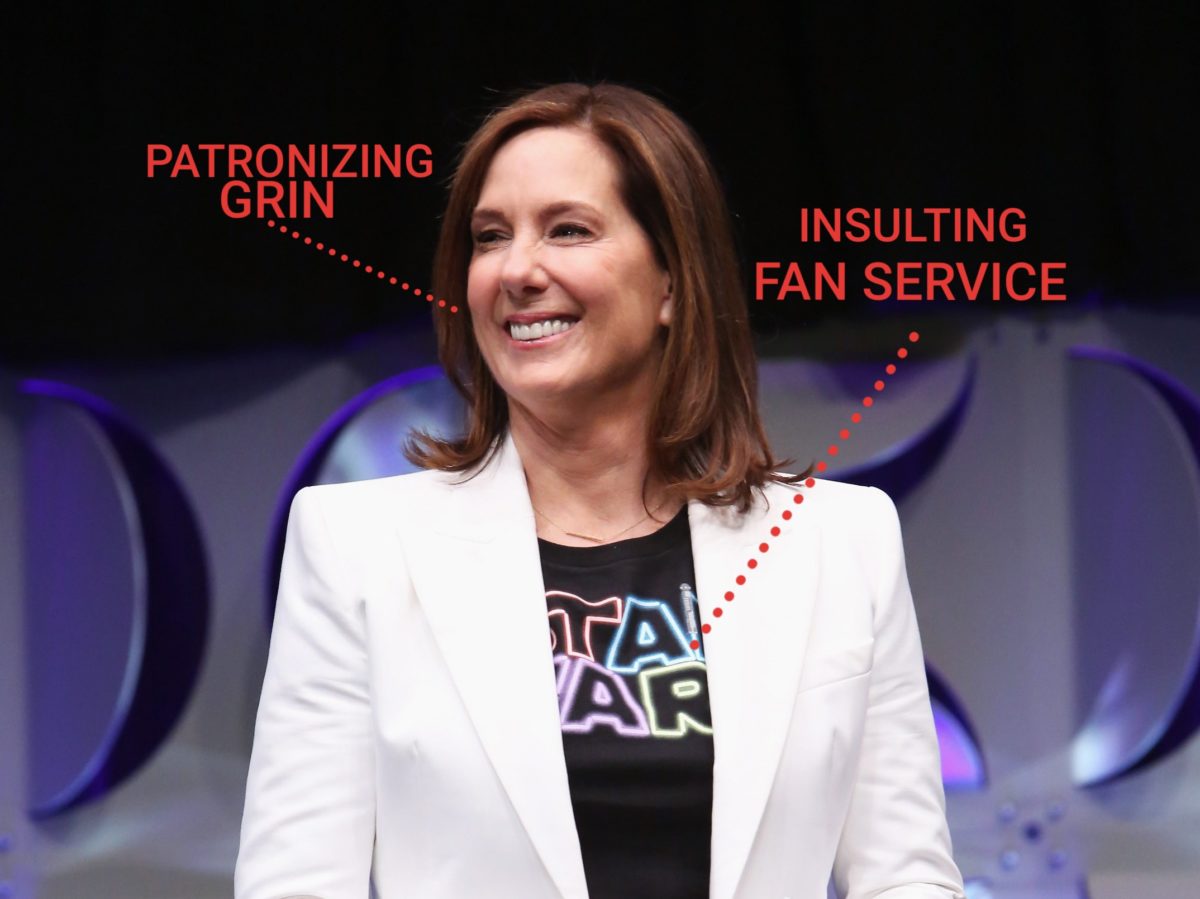 Only Now, At The End, Do I Understaaaand…

Way back in 2012, when Lucasfilm Ltd. was sold to Disney, George Lucas and Kathleen Kennedy sat down for a brief chat about the transition, their hopes for the future, and the new direction for the Star Wars saga. It was obvious fan-service but it initially seemed harmless.

Now that we’ve seen The Force Awakens and The Last Jedi in their entirety, as well as a tease of The Rise of Skywalker… indeed, now that we’ve seen the complete ruin that Star Wars has come to under Kennedy’s leadership, it’s easy to go back and look at these interviews and see the deception flying from her eyes like Force-lightning.

This article is something of an episode II to this article that I wrote for y’all a while back.

I’ll link part one of the interview below. Here are the moments that I found most telling. 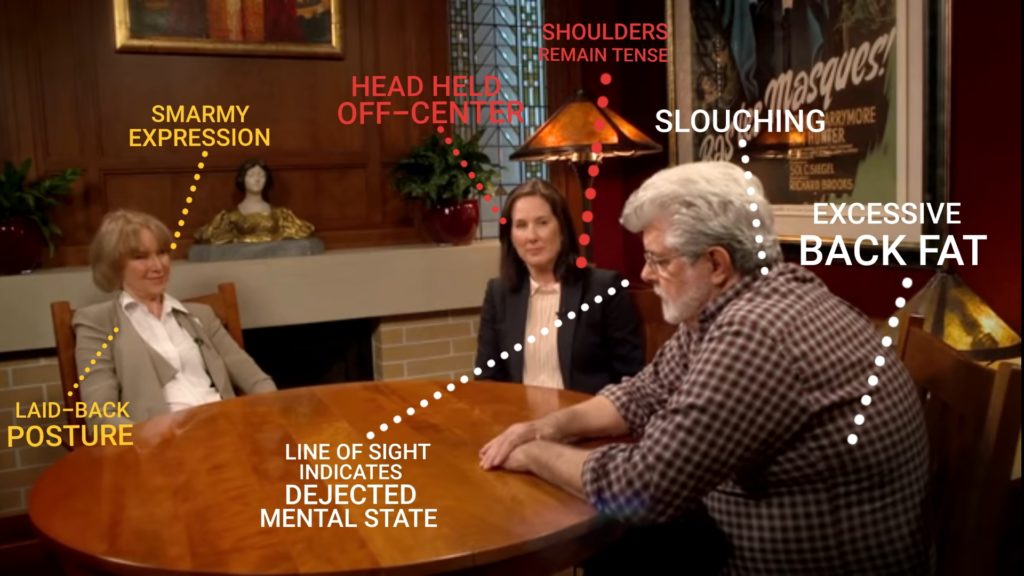 As the interview opens, we see George looking truly forlorn. He’s parting ways with his child, with the legacy he created. You can plainly see he’s been grief-bingeing while sitting at a desk.

As my bro Captain Supermarket said, we as fans have an urge to reach into the picture and console the man. We want to reassure him that we still love his trilogy, and let him know that we are forever indebted to him for his creation.

Perhaps he seems down because he can’t quite believe that his simple hero-myth has become a $4 billion juggernaut. Poor guy, right?

Contrast George’s honest emotion with the tension displayed by Kathy Kennedy. She’s on her guard, watchful, her entire focus on George. She’s like an animal during mating season in an episode of Planet Earth.

Maybe she’s afraid of what he’s going to say. After all, the deal was signed at that point and I’m assuming a deposit had been made to his account. He had nothing to lose.

If I didn’t know better from her speech, I’d say she was stoned on opiates.

On the other hand, maybe she is stoned and she’s just an old pro.

I searched for her name but I couldn’t identify her. Anyone know who she is? 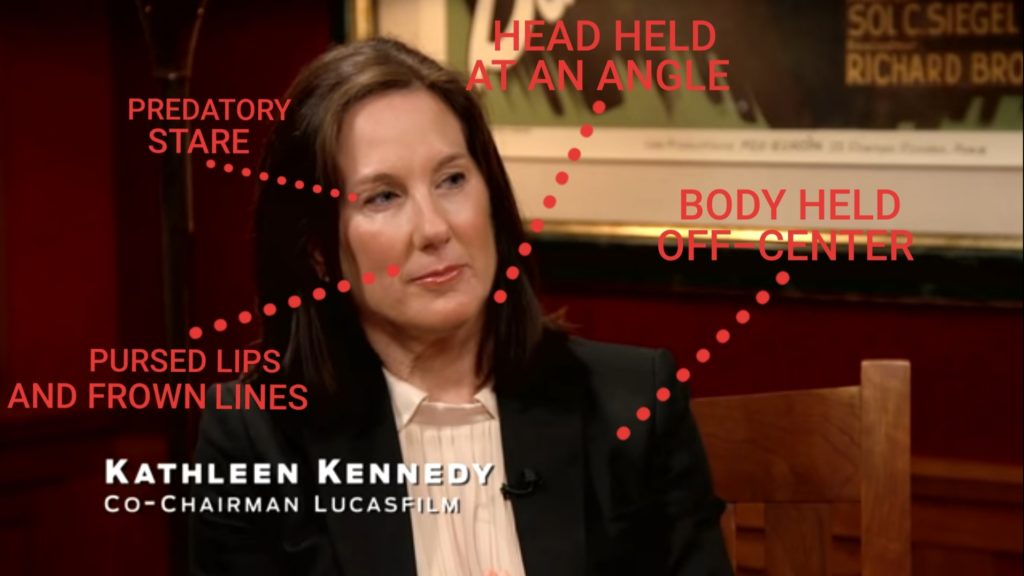 Kennedy may seem more relaxed, but that’s only because George didn’t say anything damning right away.

Now she is displaying pure contempt for George. She’s sitting as far away from him as her chair will allow.

Her head is held at an angle, which would normally indicate that she’s listening attentively, however, coupled with the set of her eyes and mouth, it indicates that she’s fuming with an internal rage. Her eyes aren’t soft, which would be the true expression of a person basking in the light of their mentor. Her words may sound good and noble, but they’re all lies. 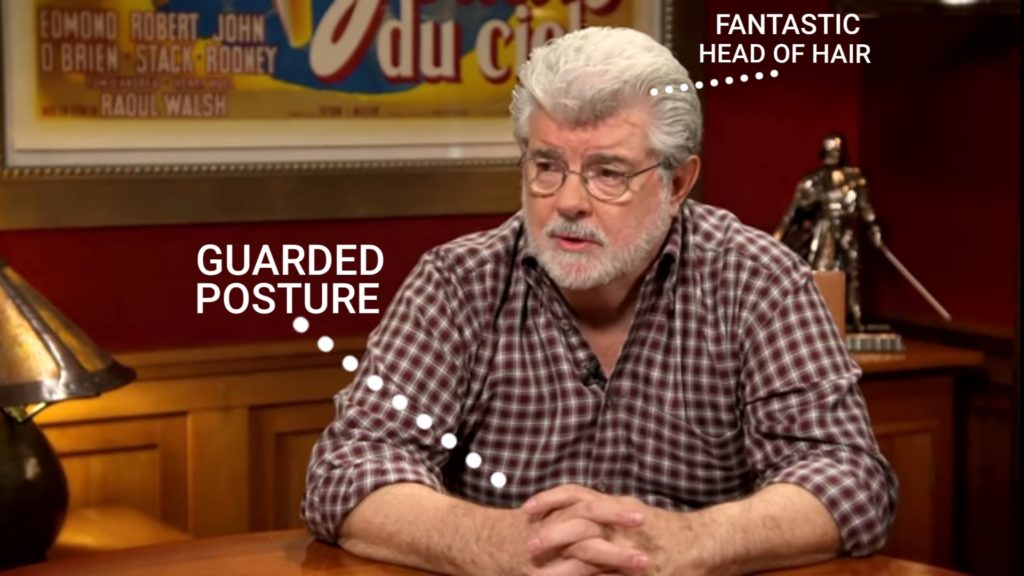 Now that George has spent some time in the conversation, he’s basically rambling and grasping at thoughts which come across as redundant.

He is a bit guarded but in a gentle way. This indicates that he is hiding something, as we later learned when he revealed his true feelings on the sale to Disney with his white slavers remark.

Ah, well. At least he has a new wife, a tremendous hairdo, and four billion reasons to celebrate. May Crom grant him victory! 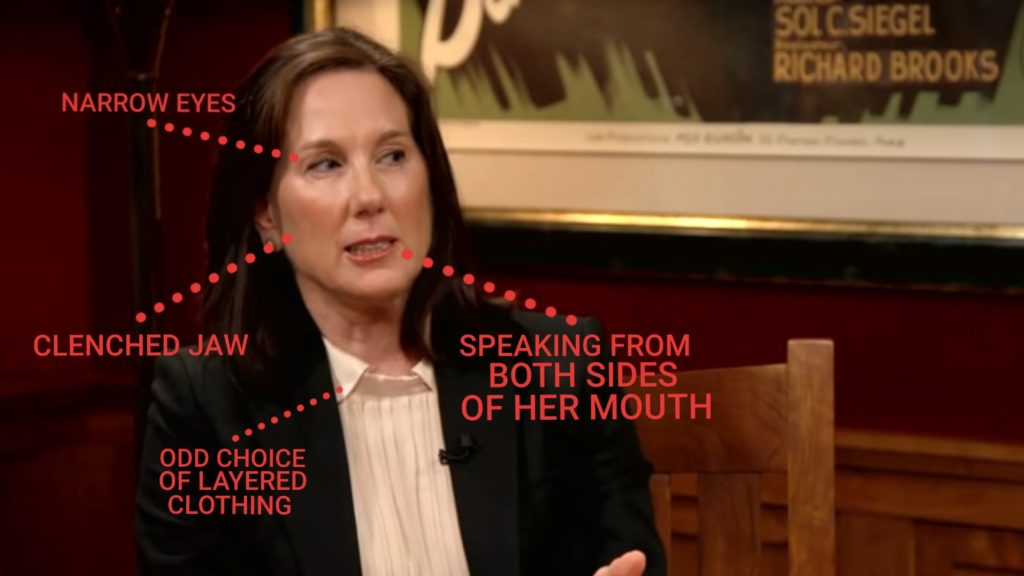 In this moment Kennedy is talking about Disney being a perfect new home for Lucasfilm and Star Wars.

It’s plain to see that she is also hiding something, from George and maybe also from her boss, Bob Iger. She extols the name of Disney while speaking out of the side of her mouth through clenched teeth.

Again, her body and face are telling a completely opposite story than her words. It’s possible that she isn’t even aware of what’s she saying, and if she took the time afterward to watch the interview, she likely wouldn’t recall that moment at all. She’s power mad, as we’ll see in the next shot. 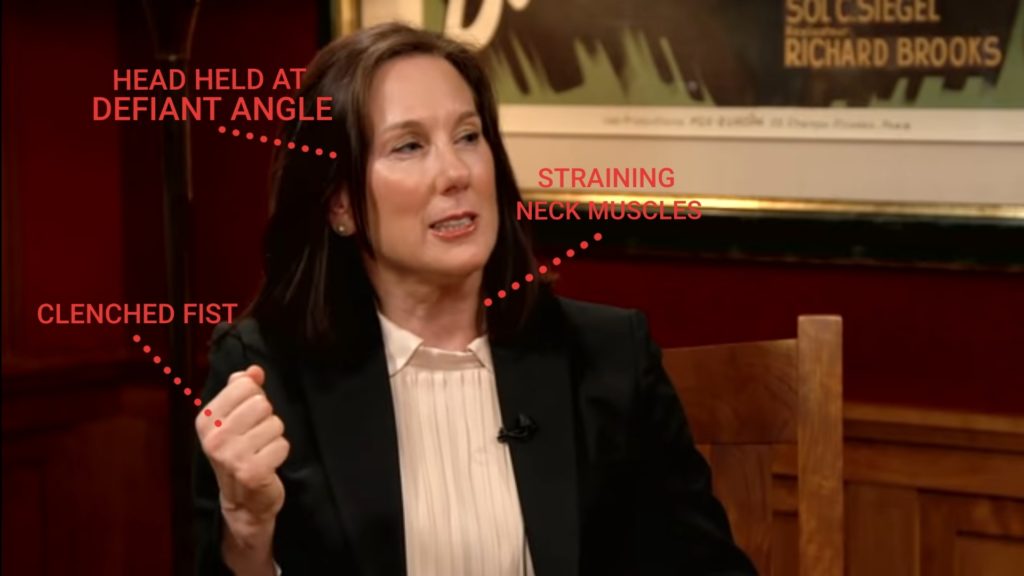 Here we see Kennedy being herself: a believer in her own hype, an angry person who has fetched too much coffee for truly talented people, and a power-mad child.

Where have we seen that stance before? Oh, yeah…

Kathy has gone over to the Dark Side. She’s a believer that might makes right and she’s about to paint a masterpiece of her own agenda.

Thou Shalt Not Bear False Witness

For a completely opposite point-of-view on this issue, you may read this insane article, which boils down the Kennedy term at LFL to mere money. With Star Wars Galaxy’s Edge nearly empty and merchandise on the clearance rack at Walmart, it’s easy to see the falsehood.

I implore you all to join me in standing against this final Skywalker saga installment. Don’t spend your money on it. Don’t give in to the Dark Side.

I love you all too much to see you walk down that path. Luminous beings are we. We are ALL Chosen Ones.