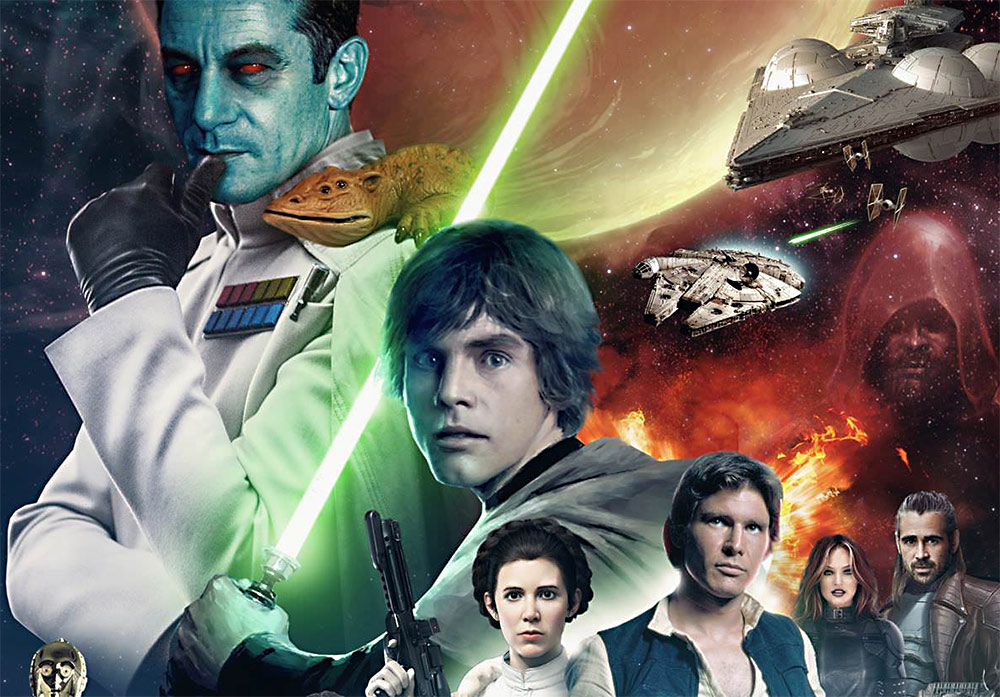 Timothy Zahn’s Heir to the Empire begins a mere five years after the events of The Return of the Jedi.

The New Republic is busy building alliances with star systems who had broken away under the reign of Emperor Palpatine, with the reestablished Senate once again meeting on Coruscant under the leadership of Mon Mothma. In spite of his discomfort with the prospect, Luke is among those now living in the Imperial Palace. The married Han and Leia are also there, watched over and protected by the fiercely loyal Chewbacca, and are expecting twins, not unusual since Leia herself is a twin, but already Luke can sense a stirring in the Force from the unborn children, heirs to a powerful legacy… 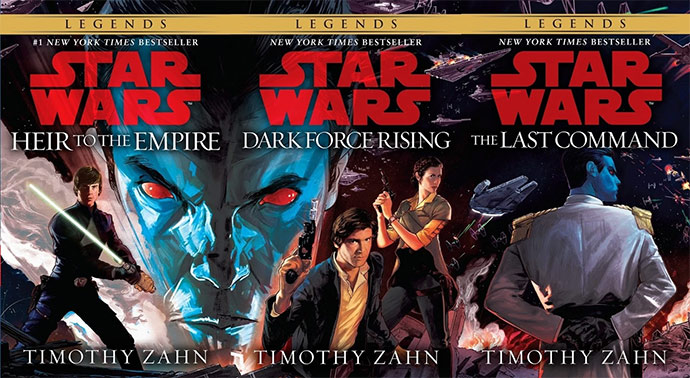 What is so appealing about Heir and the other two books that follow it is how easy it is to picture Luke, Leia and Han doing and saying the things that they do and say.

Zahn just gets these characters right.

Luke is as we found him at the end of ROTJ, a man with a promise to keep, to pass on what he has learned, but as yet he’s not completely certain exactly how to go about it.

“A Jedi can’t get so caught up in matters of galactic importance that it interferes with his concern for individual people.”

Leia is ever the diplomat, visiting far-flung star systems to persuade them of the benefits of joining up for trade opportunities and the protection that comes from strength in numbers. With the lose of Imperial control, former regional governors have become warlords, with no compunction against beginning wars for personal gain.

“Governments and entire planets are important, Threepio. But when you sift everything down, they’re all just made of people.”

Han is reaching out to contacts from his smuggling days, trying to persuade them to be alert to information that they can sell to the New Republic, but too many years of keeping low profiles mean that few are willing to trust the offer even if the rewards could be ample.

“I’ve found that what most people call luck is often little more than raw talent combined with the ability to make the most of opportunities.”

Significant new characters added to the Star Wars universe are:

Dark Force Rising sees the clone, Jorrus C’baoth, who retains the skill and memories of a powerful Jedi master, reaching out to Luke, offering to train him further. Luke accepts though it isn’t long before his misgivings begin to grow as he senses the clone’s mental instability.

“Jedi Skywalker; remember it well. For if you allow your justice to be forgotten, you will be forced to repeat the same lessons again and again.”

Han reluctantly helps Leia prepare to go to the homeworld of the dangerous Noghri to try and appeal to them to leave the service of the dead Emperor.

Leia’s view of others is so wrapped in compassion, that to her way of thinking even a deadly foe — as the Noghri have proved to be — deserve a chance at freedom.

The Last Command, as with the previous books, employs multiple plot lines crisscrossing through the chapters, as well as several space battles with X-Wings and Star Destroyers. There are also ground fights, including a few with dueling lightsabers.

Multiple foes are converging for a showdown that will determine the fate of the Galaxy, and even the lingering words of a dead Emperor have the power of a fateful command.

“History is on the move, Captain. Those who cannot keep up will be left behind, to watch from a distance. And those who stand in our way will not watch at all.”

And for the first time in five years, Pellaeon finally knew in the deepest level of his being that the old Empire was gone.

The new Empire, with Grand Admiral Thrawn at its head, had been born…