A recent report from SlashFilm revealed that a team of Jack Kirby experts has drafted in to assist in their New Gods movie.

Initially, I greeted this news with excitement, especially for how it contrasts with the recent casting announcements for Marvel’s Eternals where almost every character has been race, sex or sexuality swapped, much to the chagrin of comic book nerds everywhere. However, upon investigation, I was soon reminded that DC’s New Gods isn’t exactly untarnished itself.

So it’s time to put these two ambitious projects up against each other and see if either can survive “current year” politics! 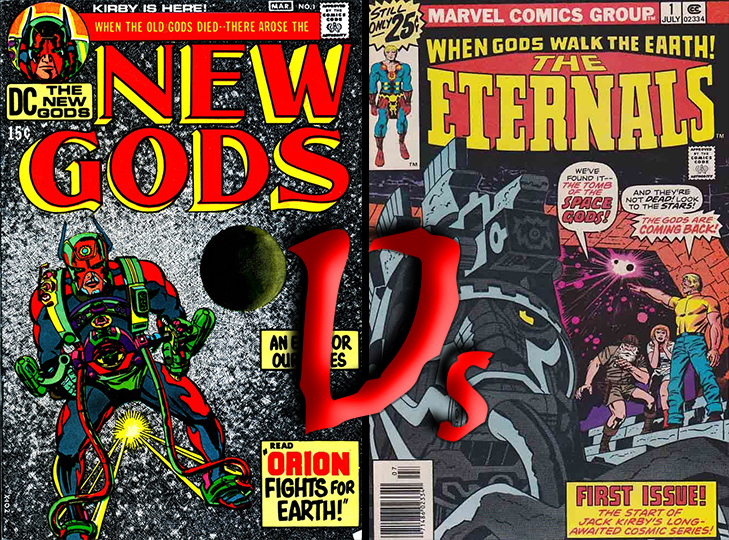 If you don’t know much about either franchise you aren’t alone as neither of these titles is likely to strike much of a chord of recognition with the general public. It’s even more unlikely they’ll understand just how closely tied the two are.

Well, in short, both franchises came from the mind of Jack Kirby, Back in 1970 Jack became dissatisfied with working at Marvel and after a dispute over the unfavourable terms of his new contract decided to jump ship and head over to rivals DC.

Kirby had always been fascinated with Mythology and symbolism and embarked on a series of interlinked titles referred to as The Fourth World which included Mister Miracle, The Forever People, and New Gods.

New Gods would feature a war between the twin planets of New Genesis and Apokolips, and the inhabitants of both. These stories mixed elements of mythology, biblical symbolism and science fiction.

It was certainly ahead of its time in more than one way with Kirby initially intending to give the story a short run with a definitive end and pushing for the release of the stories in a format that would later be called “trade paperbacks”.

While the series was doing well, however, DC demanded it continue, and when it eventually got axed in 1972, Kirby was not given time to reach his intended conclusion. Still, the series provided DC with one of it’s most dangerous, powerful and compelling villains: Darkseid.

Fast forward to 1976 and Kirby has returned to Marvel where he was given a second chance at his vision. Much like New Gods, Marvel’s Eternals featured two warring ancient races, in this case, the Eternals and their monstrous counterparts the Deviants both created by the alien Celestials’ genetic experiments on early humans. Once again the stories featured a heady mix of mythology and science fiction.

Unfortunately, the Eternals too was canceled without resolving many of its plot points. But the characters and elements associated with it would be resurrected from time to time and become a key part of the mythology of the whole Marvel Universe, including explaining where Mutants came from (i.e. those same experiments by the Celestials).

The key thing with both of these franchises is that they very much passion projects of Jack Kirby’s and in many ways the DC/Marvel equivalent of each other. If either the DC or Marvel cinematic universes are to pay tribute to the genius of Kirby then it is important they treat these franchises respectfully. So how is that shaping up?

In March 2018, Warner announced that they are making a New Gods movie. When considering who would be the best choice of director to bring the vision of a white Jewish man to life Warner naturally figured on Ava DuVernay, a woman of colour whose career has been almost entirely defined by making movies, TV shows and documentaries about racial politics… Yeah, well, of course, this was 2018 so naturally, things were about to get woke.

DuVernay had just released her box office flop A Wrinkle in Time and many fans were left baffled at the choice of director.

A month later on April 2018, Kevin Feige announced that Marvel is going to do a movie based on the Eternals. This seemed a strange coincidence and it’s not the first time Marvel has appeared to be trying to “one-up” DC as the same thing happened with Batman Vs. Superman: Dawn of Justice and Captain America: Civil War.

Disney, however, decided the best person for the director’s chair was Chloé Zhao, a Chinese film director with only two full-length movies under her belt, both of which are cowboy dramas — so another obvious choice then, I guess!

To be fair Patty Jenkins only really had Monster under her belt when she was enlisted to do Wonder Woman and that turned out well.

Still, on the surface, these choices look a lot like diversity hires intended to score points with the woke media instead of simply the best people to realise Jack Kirby’s vision. It would appear that Marvel decided not just to try and one-up DC in terms of the kind of movie but also in how woke it can be.

So the question is can either of these franchises still deliver the goods?

In DC’s corner and counting strongly against them is their choice of writer. The name Tom King is not one that will inspire confidence in comic book fans. King was allegedly booted off writing for Batman back in May, a character King apparently saw as a sad, mean man who inflicts himself on others.

Funnily enough, those words are also how comic book writer and critic Richard C. Meyer (Ya Boi Zack) describes Tom King. It seems King, like many writers these days, is incapable of empathy towards a character they are writing for and instead tries to inflict his own personality and point of view onto that character.

Add to Ava Duvernay’s inexperience in the genre and her flop that was A Wrinkle in Time and we seem to be off to a bad start. It’s hard to say if these hiring decisions were made before each party fell from grace, but either way, this seems like a questionable team, especially if DC is trying to move away from the dark and gloomy Snyder era.

It’s not all bad news though for DC. First of all, it appears DuVernay actively asked to make this movie. You can’t buy passion, so this works for me. Secondly, she specifically asked King to assemble a team of people that “knew Kirby” (King’s words, it’s hard to say if she meant personally or just his work). It’s also worth noting that perhaps King’s most respected run was on Mister Miracle which you may remember was part of the same Fourth World family as New Gods. Finally, the failure of A Wrinkle In Time is not necessarily a bad thing. People can learn from their mistakes.

On top of this, Cosmic Book News has reported on a recent twitter conversation in which DuVernay confirmed Darkseid will be a part of this movie and this is perhaps the biggest advantage the film has over Marvel’s offering.

Darkseid is DC’s Thanos (indeed type Darkseid into google and “Vs Thanos” will be your first suggestion) and much like that character, DC has actually been hinting at Darkseid’s presence as early as Batman Vs. Superman: Dawn of Justice.

Apparently, Snyder’s original plan for Justice League was going to involve the character, and while fans are split on their opinion of the director it’s safe to say most were disappointed at his absence. So regardless of anything else, we should expect this to garner fan interest. 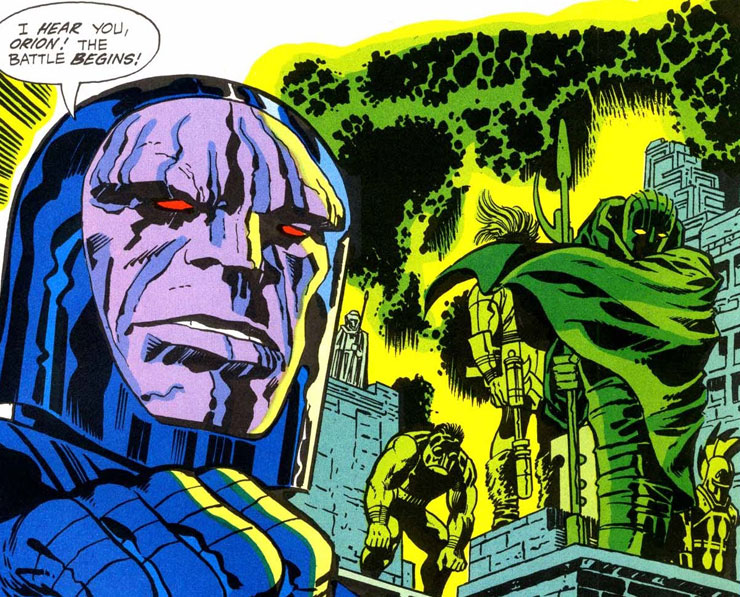 Then we get to Marvel. Well, positives first. It’s the MCU. Even their bad movies (Thor: The Dark World, Captain Marvel, etc) are entertaining enough for the normies. There was also a rumour that plans to shoot at least part of the movie on 16mm Ektachrome film, at least according to a tweet from Guardian film critic Charles Bramesco. That may not be good or bad, but it is at least interesting.

Counting against it? Well, here’s a quote from Salma Hayek:

“This movie will allow those who have never felt represented in movies, in this case, superheroes, to be represented. I love my diverse family”.

Almost the very first thing we heard about this movie was that it would feature the MCU’s first homosexual hero, and that was literally all we knew about it for a long time. However since San Diego Comic-Con, we’ve had info on the full cast and it is… well, let’s just say it’s not very true to how Jack drew his characters. 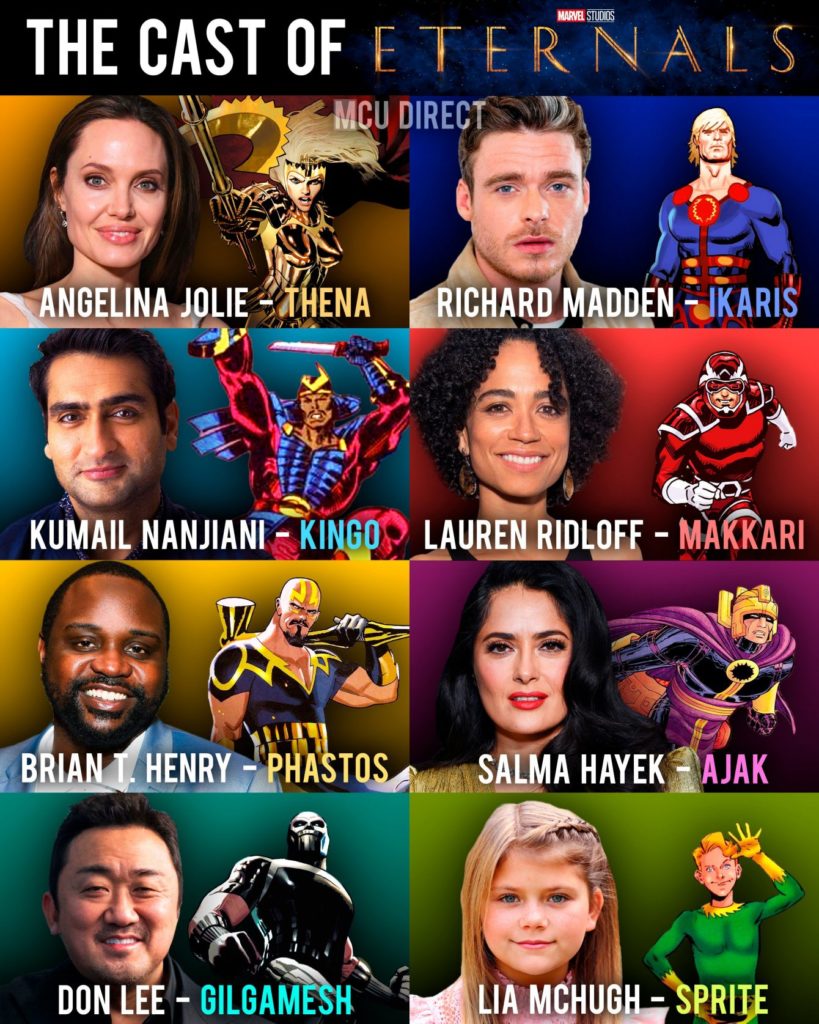 My theory is, had DC not announced New Gods we probably wouldn’t be getting an Eternals movie.

It is a strange choice for Marvel to push, given popcorn normies only like two things: familiarity and fun — and this doesn’t really look to provide either.

It seems though they may have looked at this instead as a double opportunity. First of all beating DC to the punch by getting it out ahead of New Gods, but more importantly with the normies, by not really knowing the character, they can make major strides in their diversity quota by switching characters around. Sadly the Eternals reeks of agenda.

DC’s New Gods however, I think is at least an honest attempt at bringing these characters to life. It remains to be seen if DuVernay can really direct this kind of movie or if King can write it, but certainly, the intention seems to be to do it justice.

So what do you think? Can Marvel squeeze in its usual ride of action and humour into their diversity quota filling movie, and will it be at all respectful to the legend of Jack Kirby?

Can Tom King leave his psychological hang-ups at the door and actually write for Kirby’s characters accurately and respectfully? Will you be watching either movie at all?