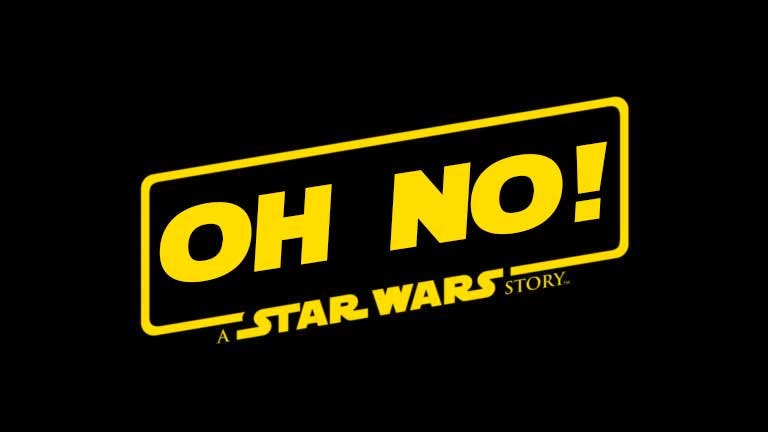 Let’s face it…the production of the upcoming Solo: A Star Wars Story film has been one of the biggest dumpster fires in recent Hollywood memory.

Most long-time Star Wars fans were extremely apoplectic upon hearing that Disney/LFL was even going to make a “Young Han Solo” movie when it was announced on July 7, 2015. For many of them, Harrison Ford *is* Han Solo, and while most (rightly) assumed that Ford would be leaving the role for good come “The Force Awakens”, nobody was really ready for the character to be re-cast so soon.

Further, Disney/LFL announced that The Lego Movie directors Phil Lord and Chris Miller would be directing it, based upon a Kasdan family script. While the involvement of Larry Kasdan heartened many, the idea of comedy directors taking on an iconic character like Han Solo scared the crap out of as many people as well. The Lego Movie was a huge success and showed that Lord/Miller could treat an iconic property like LEGO in a reverential manner, but it was also overly jokey and, in particular, poked cringe laden fun at Star Wars itself. However…most fans gave them the benefit of the doubt, as they understand that filmmakers should not be judged or pigeonholed by their most recent success, and that truly talented filmmakers can adapt their style to suit any number of stories. “Show us what you got”, if you will.

After a long casting search, LFL finally settled on Alden Ehrenreich, who is a good enough actor in stuff like the Coens’ Hail Caesar!, but who looks and sounds nothing like Harrison Ford, nevermind the fact that he looks like he’d pass out from exhaustion if his parents asked him to take out the garbage. Further casting announcements raised eyebrows (“Emilia Clarke? Didn’t anybody see how terrible she was in that piece of shit Terminator movie?”), as well as “rumors” that Lord and Miller’s “tone” was all over the place, that Kasdan was pissed that they were ignoring his script in favor of the improvisational style that the directors like, and that the lead Ehrenreich was such a lousy actor that they needed to call in an acting coach WHILE THE FILM WAS ALREADY SHOOTING.

As it turned out, things eventually came to a head, Lord/Miller and LFL parted ways citing “creative differences” (i.e…they got shitcanned), and Richie Cunningham came on board to try and right this sinking ship. Substantial portions of the film were re-shot, production rolled into post, and we haven’t heard much since.

We’re now less than 5 months away from the release date (which STILL hasn’t moved!), Disney/LFL hasn’t released any publicity shots or, heavens forbid…a freaking trailer for this thing yet, and oh yeah, a little thing called Star Wars: The Last Jedi came out and completely trashed the legacy Star Wars characters and “mythology” even further in the interim. Star Wars fans haven’t felt this bad about the franchise since the months after Star Wars Episode I: The Phantom Menace was released…when the post-viewing euphoria wore off and people began wondering why the hell they spent all of that time queued up in theater lines in the first place.

It doesn’t take a Jedi Master to reach the following conclusion:

Why Solo: A Star Wars Story Will Be An Abject Disaster

The reasons why this movie is going to fail are pretty simple. The production cost of this film skyrocketed when they had to basically re-shoot the movie after canning the original directors. The box office for The Last Jedi, which featured an, ahem…less-than-flattering portrayal of Mark Hamill’s Luke Skywalker, dropped precipitously week after week until Sony and The Rock’s Jumanji: Welcome to the Jungle knocked it off the top of the weekly box office take, never to return. No shit…Sony and The Rock beat Star Wars! Freaking Sony!!!

So instead of falling into clinical depression, I’m choosing to embrace the disaster that will be Solo: A Star Wars Story. If I go in expecting it to be ultra-terrible, I can’t possibly be disappointed, right? I mean…we all enjoyed Mike Hodges’ Flash Gordon back in the day, right? That movie was a pretty big piece of shit, but it’s a fun piece of shit! The special effects were bad, the plot is atrocious, but holy shit…that glorious Queen soundtrack! Ornella Muti slinking around! Max Von Sydow and Brian Blessed chewing up the scenery like they hadn’t eaten in a month!

While the hard-core fanboys will inevitably mope about how the long-standing “canon” of Han Solo’s earlier adventures as told in books and the Expanded Universe b.s. are now rendered obsolete by this film, and the general movie going public shows complete disinterest in the whole endeavor (“Really? Didn’t we just take the kids to “Star Wars” a few months ago? I gotta spend another hundred bucks for this garbage again already?”)…I’ll be leaving all of my forty year fandom at the door, and am looking forward to rubbernecking the biggest cinematic car crash since Disney’s John Carter. Heck, I might even be able to get a really good center aisle seat, with an extra seat on either side of me so I can stretch out and really relax. They’ll probably be lots of seats to choose from.

Since they’ve already scrapped everything else already, maybe they can scrap John Powell’s score and get the fake ass Adam Lambert fronted version of Queen for this shitshow, too! Just for old time’s sake.

Whatever happens, I’ll be there opening weekend to drink in the misery.

Or I’ll just wait until it shows up on Disney’s FX channel in 2020.