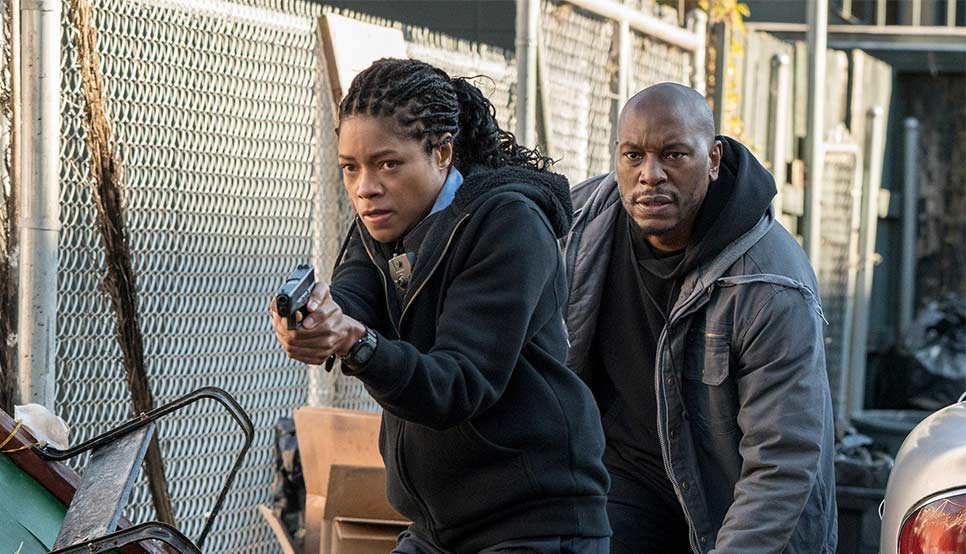 It’s the same old shit about them corrupt cops poisoning the community with drugs.

This time with very subtle explorations of a police officer grappling with her identity as both a member of law enforcement and an African-American.

See, it’s about being black… and being blue. Get it? Do you get it?

It also goes on to delve into the notion of whether cops and criminals are really just two sides of the same coin. Mom called it psychologically taut. Q&A meets Narc. ?

From the IMDB synopsis:

An action thriller about a rookie cop (Naomie Harris) who inadvertently captures the murder of a young drug dealer on her body cam. After realizing that the murder was committed by corrupt cops, she teams up with the one person from her community who is willing to help her (Tyrese Gibson) as she tries to escape both the criminals out for revenge and the police who are desperate to destroy the incriminating footage.

Yeah, this is a movie where bent cops execute people in abandoned warehouses with multiple unguarded entrances and really good lighting. During the day.

Black And Blue is another picture from director Deon Taylor who seems to specialize in well-cast, competently-made movies that are as inspiring as a bag of Doritos.

Of course, that means he has three other movies in post-production right now:

Meet The Blacks 2: The House Next Door

When best selling author Carl Black moves his family back to his childhood home, he must team up with oddball neighbors to do battle with a pimp, who may or may not be an actual vampire.

A married man is tricked into a murder scheme by a female police detective. Starring Hillary Swank!

Akira, a young and attractive but emotionally damaged Japanese woman moves to the United States to escape a past marked by tragedy. She moves in with her sister Hana and her new husband Adam to start a new life. But as Akira’s behavior grows increasingly erratic and strange disturbances mark the night, Akira is forced to reveal her real reason for coming.

Meanwhile, David Mamet is essential banned from Hollywood and they still can’t get a King Conan movie made.

I’m sorry you had to watch that, I’m sorry I posted it and I wish it never happened — but there is really nothing going on today. It’s completely dead out there. Feels like there might be a terrorist attack soon or something.