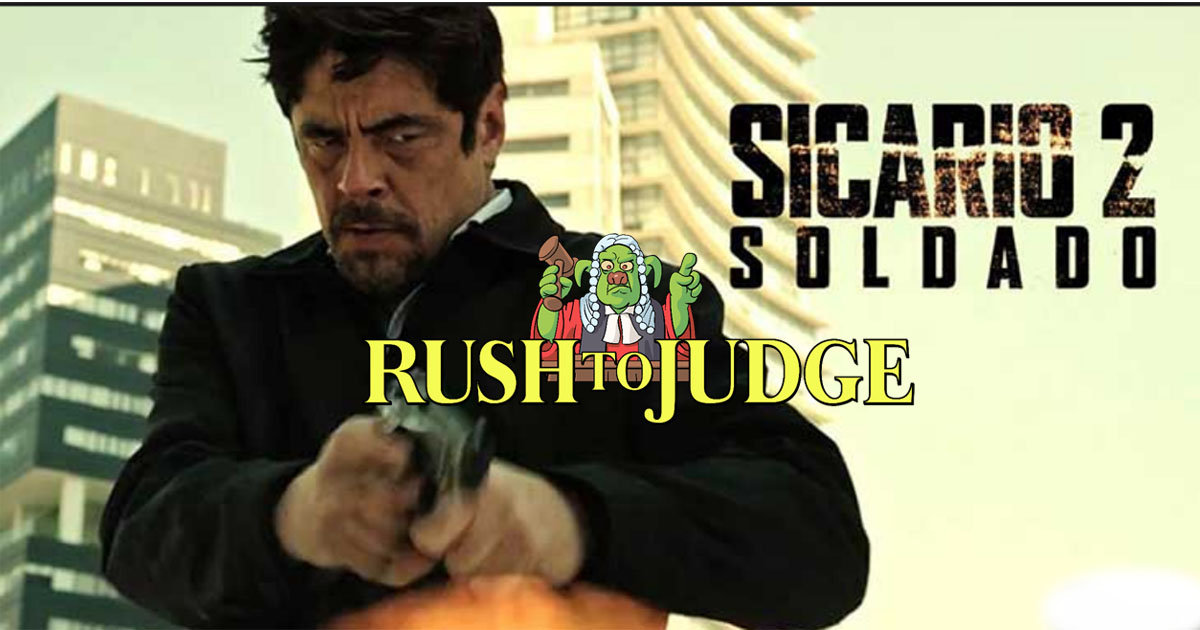 In this weeks Rush To Judge™ I will take a half measured glance at what I am sure is a film that is going to let everyone down: Sicario 2: Soldado (June 29, 2018).

This is a sequel to the surprise family hit Sicario. It stars Hollywood’s own Lack of Latino Benicio Del Toro (Duke the Dog-Faced Boy from Big Top Pee Wee) and Josh Brolin(Jonah Hex from Jonah Hex). Not returning this time out is Emily Blunt (Salmon Fishing In The Yemen), as our morally confused and way out of her element audience surrogate, and director Denis Villeneuve.

This change of director, unfortunately, I think, is going to reveal the biggest impact on the quality of this film.

Here is the trailer, so let’s take a look:

I was on the fence with Sicario. I think Josh Brolin, Benicio Del Toro, and Emily Blunt are all decent actors and did their job well enough.

Director Dennis Villeneuve in using, what I think is a masterful sense of sound, film and color editing created an overwhelming sense of tension and danger, that phased in and out, always just seeming ready to blow up and reveal the inevitable darkness and brutality that runs beneath the surface.

He also dropped the audience, thru Emily Blunt’s FBI agent, straight into an almost alien world of drugs and death. A world run on a philosophy of where the end justifies the means, no matter how terrible they may be.

But to that end, no matter how deep it dug or how many buzzing sound effects they used, well, it just didn’t amount to much of a payoff or anything more than a predictable story.

Sicario was just another morally ambiguous Cowboys-and-Indians tale with some subtle anti-drug war propaganda and a tacked on subplot starring a mysterious – doesn’t talk much – Benicio Del Toro, who has seen and done… terrible things.

With new director Stefano Sollima (Lots of Italian TV shows) at the helm, Sicario 2: Soldado is sorely lacking the only real positive thing the 1st movie had going for it, Dennis Villeneuve’s aesthetic.

So to make up for that they just added more violence, another woman agent, a few ideas from Tom Clancy, chucked in a twist that will make people confront what they are willing to do for justice and made Benicio Del Toro even more ruthless, but also more thoughtful.

Finish it off with some top-notch television level production values and we got us a real stinker of a sequel.

Watch for: Sicario: The series, Thursdays on FX.