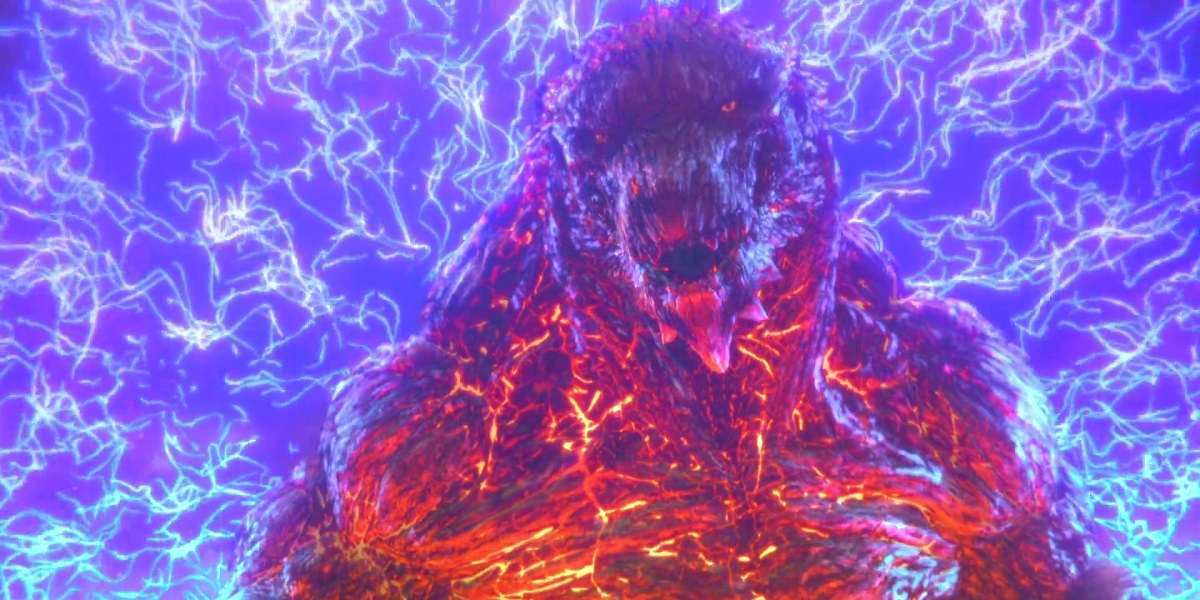 Netflix has released the second entry in the animated Godzilla trilogy, Godzilla: City on the Edge of Battle  –  Gojira: Kessen Kidou Zoushoku Toushi.

For those that didn’t care for the first film, there probably is not much to see here. This truly is a second chapter, picking up right where the last film’s post credit scene left off. It builds on the world established in Planet of the Monsters and further develops ideas and characters, while offering some striking visuals.

Protagonist Haruo Sakaki awakens to see that he survived the catastrophic destruction caused by Godzilla from the end of Planet of the Monsters. He soon finds that his savior was a native girl. He and a group of fellow survivors are rounded up by the native people and taken to their underground home.

In several ways the plot and pace mirror the first chapter. The story starts again with a dire situation. It’s more about the immediate survival of the characters instead of the broader plight of humanity.

It’s not like the first film created a great attachment to the characters, but we can feel more invested knowing some of them and what they’ve been through. We also understand why the group rally behind Haruo to continue the mission, despite the crushing setback. When contact is made with the ship Aratrum, orbiting Earth, only three return.

The introduction of the native race of people also adds a new dimension. This group of people call themselves Houtua and they communicate by telepathy. The girl who saved Haruo is called Miana and she has a twin sister, Maina. They are clearly modeled off the twin fairy shobijin from the original Mothra (1961).

In case the Mothra connection is not clear enough, the Houtua mention that Godzilla killed their god, leaving only an egg. It’s because of this, the Houtua let Haruo and the other survivors go free to battle the monster.

It is hypothesized that the Houtua may not even be truly human. The dust on their skin, which healed Haruo and the others, seems to have insect attributes. In the character designs the front of the hair looks almost like down-turned moth antennae. This is similar how the animal and plant life on the surface of Earth have taken on attributes of Godzilla. This concept of the dominant life-form influencing life around it is carried from the first movie.

The real breakthrough comes when the Bilusaludo alien, Galu-Gu discovers that the Houtua are using nanometal in their weapons.

This is the very metal used to make MechaGodzilla, which was destroyed in the opening scenes in Planet of the Monsters. Miana and Maina take the survivors to where the metal comes from and we learn that MechaGodzilla survived and has become MechaGodzilla City.

It’s worth mentioning that despite what the posters may have lead you to believe, MechaGodzilla proper does not appear in the film. Nanometal is a self-propagating material and the head of MechaGodzilla built up a hidden city (under a cloud of breathable atmosphere) over 20,000 years. As cool as a city-to-robot Transformer would be, it does not happen.

Again, the story mirrors the first film. A plan is devised to stop Godzilla, this time to use MechaGodzilla City to trap and destroy it the same way the smaller Godzilla was killed before. The Bilusaludo create new mechs, dubbed Vultures, to battle Godzilla and plan to use nanometal to deflect Godzilla’s heat ray and capture him in a liquid form.

During this build-up there are a few quiet moments. Firstly, the token girl, Yuko Tani confesses that her admiration for Haruo has become a more romantic feeling. It’s a rather perfunctory scene, but the sentiment does tie into larger theme about being human and it is a set-up for the film’s climax. It also provides a juxtaposition to the cold, mechanical confines of the city.

Also, some of the Bilusaludo willfully let MechaGodzilla City absorb them with nanometal to become part of the monster-city. The idea of becoming a machine for efficiency was touched on in Terror of MechaGodzilla (1975) where the daughter of scientist Dr. Mifune is transformed into a cyborg controller. It’s another way these animated films give a nod to the classic film series.

This lastly leads to the Exif alien Metphies telling Haruo that the nanometal will consume the Earth after Godzilla is defeated. At first glance, this seems like helpful advice, but the Exif may still have nefarious motivations. Metphies also mentions that a monster even more terrible than Godzilla destroyed his home-world. There is heavy foreshadowing that an Exif artifact being repaired by city technology is connected to this terrible monster…

Haruo, Yuko, and a Bilusaludo named Belu-Be fly the Vultures and lure Godzilla to MechaGodzilla City to be captured. A nanometal harpoon should seal the monster’s fate, but Godzilla begins to generate enormous heat instead.

At this time Galu-Gu initiates nanometal absorption for the Vulture pilots. Haruo is immune to the nanometal due to his exposure to the Houtua’s dust, but Yuko has no defense and is terrified. Harou has to decide to try to save Yuko or defeat Godzilla.

Again, there is a prolonged wait for the Godzilla action, but the lead up is a bit more interesting this time around. The visuals of Godzilla’s heat ray are very cool and the Vultures zooming around Godzilla ratchet up the intensity from Planet of the Monsters.

Because this is a middle chapter there really isn’t any thought that Godzilla will really be defeated. The tension comes from how the plan falls apart. The choice Haruo has to make between becoming a monster or keeping his humanity is a little heavy handed, but it does tie into the first film. Haruo’s drive to return to Earth ultimately is to save humanity, not just kill Godzilla.

Godzilla: City on the Edge of Battle builds off its predecessor and actually makes the first film more enjoyable as viewed as a part of a larger story. Again, there is an abrupt ending, but characters and story developed in some interesting ways. Anyone who had the slightest interest in the first film should give it a watch.

That said, the film does fail somewhat as a stand-alone story. Planet of the Monsters is required viewing to fully understand the situation and character motivations.

As a middle chapter, there are dangling threads. It’s almost a given that Mothra will appear. There is a question about how much of MechaGodzilla City survived and if that would allow for MechaGodzilla to appear. If so, it’s implied that Mothra may be the only way to truly destroy the nanomental. Also, it would be interesting if any part of Yuko has bonded with MechaGodzilla.

The big reveal in the post-credit sequence should be no surprise at all for any Godzilla fan. There can only be one space monster to which Metphies could have mentioned. The Exif artifact that was repaired will likely summon the monster to Earth.

There should be no doubt that the last film with finally provide monster battles. The film certainly sets the stage for an epic conclusion.