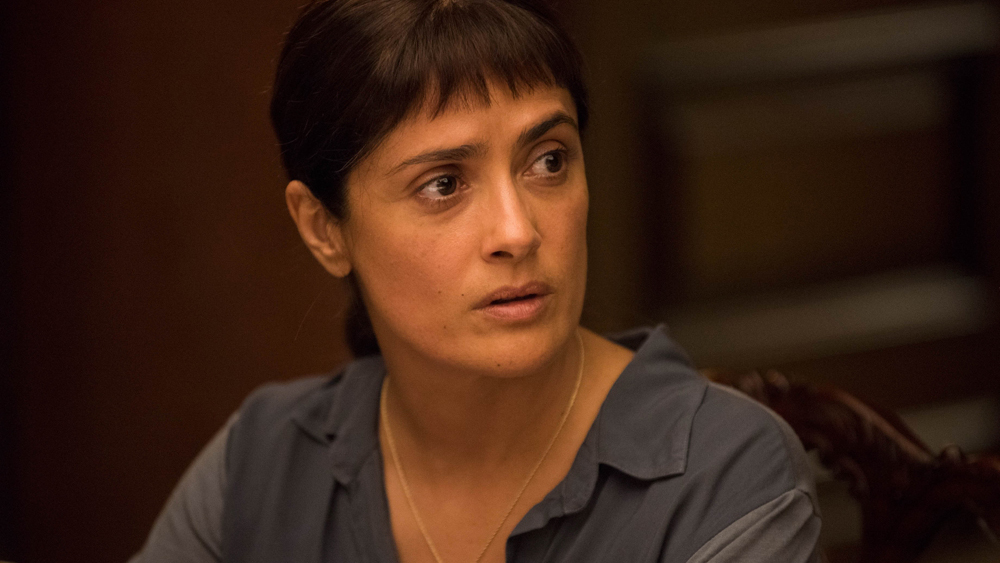 Salma Hayek goes without makeup and acts as though she’s part of the media-buzzword “opioid crisis” in writer Mike White’s movie Beatriz at Dinner.

Mike White is responsible for writing movies like Orange County, Nacho Libre, and The Emoji Movie.

However you may feel about those movies, there isn’t a trace of humor in White’s effort here.

The writing is solid but it allows Salma Hayek to nearly sap the life out of the movie; no small feat, considering she is up against John Lithgow and he is clearly having a blast.

There are other actors in this movie but ultimately it comes down to Hayek and Lithgow.

I waver a lot on which actors I consider to be the best I’ve ever seen or most enjoy, but there are a couple that I think consistently turn in incredible performances. One is Sam Rockwell.

The other is John Lithgow. This movie is worth watching for his performance alone.

He plays a complete asshole of a character and shreds the scenery and the other actors in his wake. I almost believe that the movie was intended to showcase him and Hayek became an afterthought in the editing room.

There are two scenes where Lithgow is seated and still brilliantly conveys a predatory menace toward Hayek, and she looks back at him like a stoned deer in the headlights. I was blown away by his effort.

Nothing Better To Do

I seem to recall that Salma Hayek married a man with a lot of money, so I’m assuming that she doesn’t need to act for a living anymore.

So I’m further assuming that she picked this project to… say something about the environment? Make a movie with deeper thematic meaning?

I have no idea. Her character was so odd and the symbolism surrounding her was so labored that I quickly lost interest and waited for Lithgow’s next scene. I suppose she deserves credit for being consistent in this movie, as she never falters, but she was so boring.

Aside from the solid writing and terrific villain, the directing is competent but not special, and the editing is very well done. I was never bored and the movie is short.

I won’t spoil the strange ending but it’s one of those that will tick you off. Fair warning. Lithgow plays it perfectly and the movie fucks it all up for the sake of symbolism.

One more time, cuz I wanna and you know you wanna: