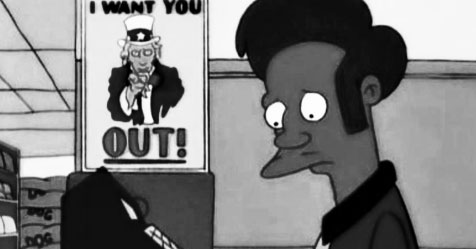 So It’s Come To This

The bombshell recently hit that The Simpsons would be dropping series standby and fan favorite Apu Nahasapeemapetilon from the show.

Unlike the case with Edna Krabappel where her voice actor unfortunately passed away, the lovable operator of Springfield’s Kwik-E-Mart has been relegated to the status of non-entity because as Married… with Children would say, “Some lady in Michigan didn’t like it.”

In an episode last season, the show tried to get in front of the nontroversy by specifically addressing the issue at the end of an episode with Lisa and Marge, panning to a framed picture of Apu he had signed with the phrase “Don’t Have a Cow.”

This probably would have been enough to nip this nonsense in the bud; however, South Park had to stick its nose where it doesn’t belong.

While I don’t think Matt Stone and Trey Parker had any ill intentions with dropping Mr. Hankey off in Springfield, so he could continue to exist with other “offensive” characters, it did open the wound that had neatly healed due to people moving the fuck on with their lives.

I have been a fan of The Simpsons since it began, and I will continue to watch it as long as they are airing episodes on TV, and once that stops, I have all the seasons on physical media they have so far released. Dropping a single character won’t get me to stop watching, so why would keeping one cause anyone to not watch?

The easiest answer is they were never a fan of the show anyway, so why are the creators kowtowing to people who aren’t their primary audience anyway? It’s like that episode of Drawn Together where Spanky points out the biggest critic of the show is someone who encompasses everything they make fun of.

The argument going around is that Apu was a lot of people’s only exposure to an Indian character in the medium for decades, and that’s somehow the fault of the show.

If only there was a form of media that came out over a decade ago that depicted an Indian character in a much more flattering manner.

After all, if The Simpsons wanted to maintain the character, they should have depicted him as a real person and not a stereotype. If only they showed that he was educated, hardworking but not against cutting corners, a devoted husband and father who also faces challenges with infidelity and giving his children his full attention.

You know, a fully rounded character. What’s that? They did do that?

Anyway, I’ll keep watching and cross my fingers that Apu will be replaced with Steve Barnes.