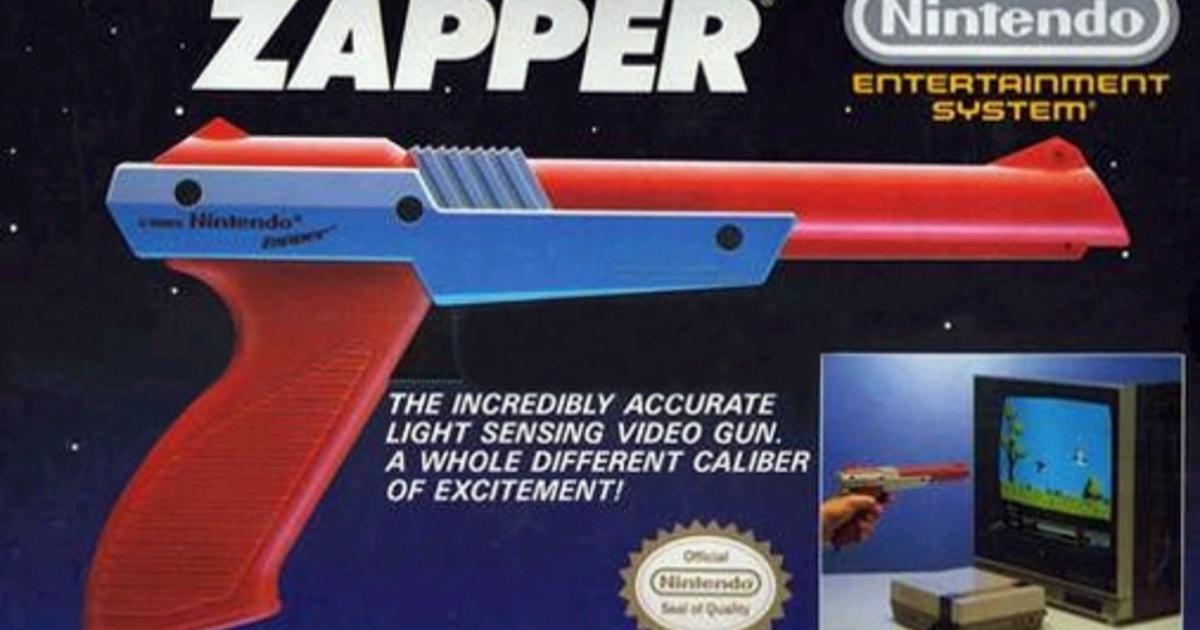 A well regulated Militia, being necessary to the security of a free State, the right of the people to keep and bear Arms, shall not be infringed. – Second Amendment to the United States Constitution

I’ve been hearing a lot about guns and laws about who should and should not own said guns lately. Typically, a lot of this talk has come either from people who have stockpiles of weapons and munitions comparable to small nations or people who think that because they were in the general proximity of someone who was shot that their opinion is now the Alpha and the Omega.

I’ve never owned guns myself, let alone so many guns that would necessitate a rack, but I grew up in a household where guns were prevalent.

You know what else I grew up with? The NES, and it was fucking awesome!

I had no idea what video games even were before my parents brought home a Nintendo Entertainment System one day, along with the games Super Mario Bros. and Hogan’s Alley. Obviously, Mario needs no introduction, but Hogan’s Alley could only be played with the Zapper light-gun peripheral.

What is the Zapper you ask? Here, let the Japanese explain it to you:

As you can see, the Zapper was a gun attachment that could be used to play a handful of games on the NES. While the Japanese had a more realistic model, the Americas got a retro-future inspired looking gun. Growing up in the United States, I knew what guns were at four years old, but this was the first time I got to feel empowered while blasting away 8-bit baddies on the living room television.

Nowadays, light gun games have fallen out of fashion, notably due to the diminishing amounts of CRT TVs. There’s some sciencey explanation for it, but the gist of it is that modern flat screen televisions can’t recognize the flash the light gun makes, just like I can’t tell the difference between a flesh light and my wife: they’re both cold and rarely sterilized.

There have been some workarounds, like the Wii remote, but since these games were never terribly popular, outside of their 1980’s heyday, the genre has been phased out. 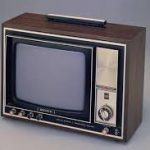 However, in light of the current political climate, the downfall of the CRT TV market and the decline of light gun games can all be seen as a ploy by the anti-gun establishment to de-arm our children, thus future generations will grow up incapable of shooting. Therefore, I implore those of you who are reading this to scour the Lists of Craig for free old timey televisions, so future generations will not be deprived of the chance to spill digital blood from a plastic barrel.

Now that you’ve procured the proper television, here’s a list of murder simulators you can use to desensitize your child, ensuring they are a fully capable and compliant soldier for the coming war… 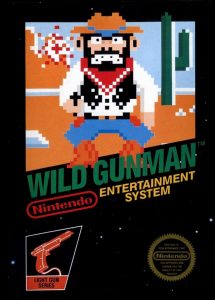 I don’t wanna spend too much time on this game because  <insert Back to the Future 2 reference here>, but it’s a good place for young children to learn how to unflinchingly stare down an opponent before blowing them away without a moment of hesitation. Shoot too soon, though, and the little pussy will cry “Foul!” instead of lying on the ground in a pool of his own blood. There’s also an option to go against two outlaws at the same time, but only one will actually try to shoot the player. Again, shoot too soon, or shoot the wrong outlaw, and it’s game over, instead of a night of drinking and whoring like the Old West intended.

There’s also a game option called “Gang”, but instead of being an early gang bang simulator, the player stands out in front of an old-timey saloon while outlaws come out through the door and windows. The good thing is the player can just blast them away as soon as they appear, no more waiting for them to draw their weapon like some kind of dueling gentleman.

Overall, the cartoony nature of the game is good to indoctrinate young children to the realities they’ll soon be facing of gunning down their fellow man. Unfortunately, the true outcome of the duel is not always shown, for when the player wins a duel, instead of blowing off half of his face Gus Fring-style, the opponent will only lose his hat or have his pants drop. However, this game does let you shoot Mexicans… 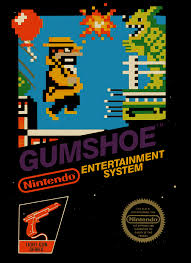 This game is a weird sub-genre of the light gun games where the player has to use the gun to control a character, rather than just blowing shit away. Moving from the first person perspective to a 2D side-scroller, Gumshoe gives the Zapper wielder omnipotent power (like God when he’s holding a gun) over one Mr. Stevenson, who continuously walks to the right of the screen. The player will need to shoot this bastard in order to make him jump, avoiding pitfalls and other obstacles.

The object of the game is to recover five black panther diamonds in order to get your kid back from some pedophile or something. If you miss one while walking, you’ll have to repeat the level until you pick it up. Occasionally, random assholes will also throw bottles at him, and the player will need to destroy these before they hit the protagonist. As is common in everyday life, there are also glowing skull and crossbone blocks that will result in instant death if the player touches them, as well. 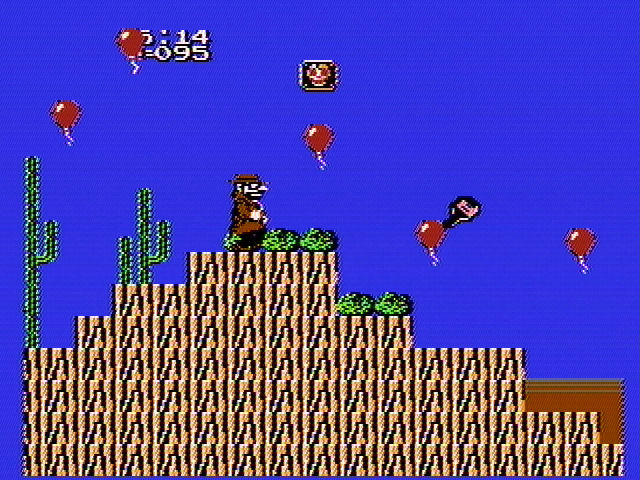 While I applaud the game for switching up the formula, I don’t want my future soldiers thinking they can shoot a person and that they’ll only do a little Yoshi jump as a result. Luckily, this game is good for harnessing its unique B.S. play mechanics to develop hatred for his fellow-man in the soul of the player. They will need this in the days to come… 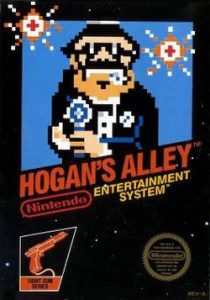 Similar to Wild Gunman, the player again assumes a first-person perspective while blasting away “targets” of cartoonish gangsters. To mix it up this time around, there are also civilian targets intermingled to ensure that when the time comes the shooter will not indiscriminately blast away any life form it comes across.

The first style of gameplay consists of a shooting gallery where three targets are flashed in front the player. The goal is to hit only the gangster targets and refrain from shooting the whitey police officer, old man, and single mom.

After the player is bored to tears from this repetitive torture, you can opt into the second style where you patrol seedy back alleys for smack. However, the gangsters are trying to steal your precious narcotics from you, so you have to blow them away. Also, the prostitutes, Johns, and police officers shaking them down for cash are patrolling these streets, and you’ll be docked if you blow them away accidentally.

There were a handful of other Zapper titles, but like R.O.B. the robot, it was a frequently overlooked accessory. Even future games that included light gun aspects to their games, like The Adventures of Bayou Billy, used it more in an auxiliary sense rather than as the main style of gameplay.

Thanks to the thriving homebrew scene, the Zapper has no longer been discarded as a relic of gaming’s past, and a new Zapper game was introduced a couple of years ago that doesn’t require the use of a CRT TV to play. Super Russian Roulette provides all the fun of Russian Roulette with none of the messy cleanup or need to be a Vietnamese POW typically associated with the game. It’s like the new versions of Monopoly that do the banking for you.

Boasting over four minutes of speech, the gameplay is basically an onscreen cowboy who goads you into playing Russian Roulette. Each player takes a turn pointing the Zapper at their head and pulling the trigger, and the onscreen images let you know the results. The talking cowboy makes it interesting, but if he “exits the game early” you’re left staring at his corpse on the table while you continue the game.

From My Cold Dead Hands 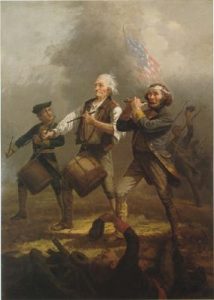 Like the Atari 2600, I appreciate the light gun games of yesteryear, but I cannot engage in any lengthy gaming sessions with them.

However, I try to keep my skills as sharp as possible, and will rotate them in and out if I have a few minutes to spare. If not, who knows how long until the King of England rises from his slumber to reclaim his precious colonies.

The price of freedom is eternal vigilance, and I will not let the light-gun go dark on my watch. 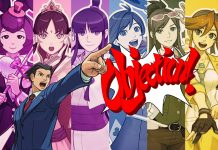