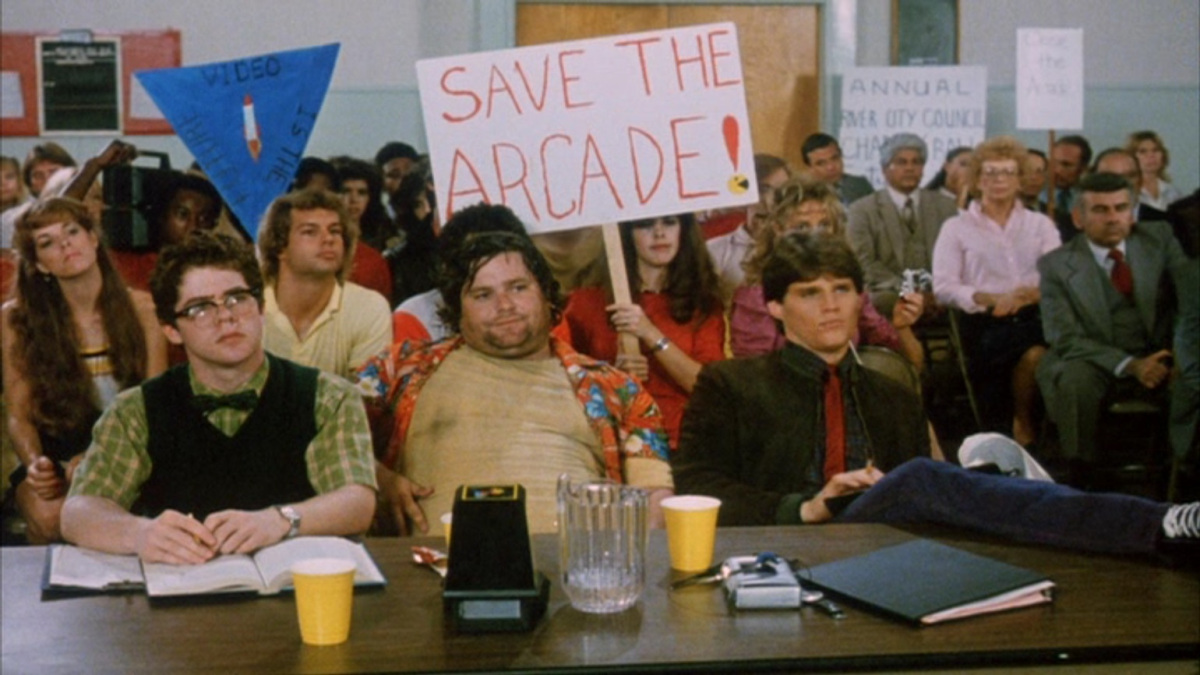 I’ve previously mentioned that my first job was working at a dying arcade in the waning days of the 20th century. Recently, thanks to Cinemassacre, the cult classic 1983 film, Joysticks, was brought to my attention. A film that combined my two favorite things: retro games and boobs!

Having first-hand experience of what it was like to work in an arcade during the last breaths of the industry, I thought it would be fun to juxtapose my experiences with those presented in the film set during the golden age of the arcade.

After all, how much difference could 15 years or so really make?

Joysticks is a film that was made to cash in on a popular topic at the time by people who pretty much had no idea what video games are. There are plenty of cringy moments in the film for arcade aficionados; perhaps the worst being the “totally into it” look that a chick has while playing a version of arcade strip poker in the back room/bone shack.

The film begins with nerdy Eugene on his way to his first day of working at Jeff Bailey’s arcade. Apparently, Jeff and his grandfather started the arcade, but the old man is M.I.A. at the start of the flick.

En route to his shift, a couple of sluts con Eugene into posing with his pants down while they take a picture. Typical 80s shit.

When Eugene gets to the arcade, the movie overlaps the closest with my life as he has to walk around cleaning the screens of the machine. This was one of our nightly closing activities, and as the management was too cheap to pay us to stay after the store closed to clean, we had to do it while the arcade was still open. Of course, depending on who was opening the next day, we usually would say, “fuck it.”

While doing his menial task, Eugene runs into Dorfus, a fat slob who was class president (OK?) before having his life derailed by video games. I’m not sure if his character was intended as a slight against video game players or a status to strive for.

Not All Fun and Games

Having worked in an arcade during the time period I did, half of the games were not classic video games. Instead, they were stupid ticket games meant to rob little kids of their money in exchange for tickets they could redeem for fabulous prizes. We had a 13-inch television for around 48,000 tickets, but no one ever won that in the close to two years I worked there.

I loathed working on Sunday mornings because this fat Mexican kid would come in and play the ticket games and leave with a shit ton of candy. I felt a little bad giving it to him, but at least it was being kept out of the hands of an American child who might actually have a future (MAGA!). I saw that same kid years later in the mall, and he had ballooned to about double his original size. Impressive for someone who was a giant fat-ass to begin with.

I never saw him put ketchup on a cookie, though.

One of the other video arcade regulars we are introduced to is King Vidiot, played by Napoleon Dynamite’s Uncle Rico. He is always accompanied by four chicks, presumably representing the ghosts from Pac-Man, but he never seems to engage in intercourse with any of them. Regardless, if my daughter grew up to dedicate her life to a fuckwit like this, I would immediately disown her.

The uptight bad guy of the film, Mr. Rutter, who wants to close down the arcade (because… movie), is played by Joe Don Baker. He would later go on to appear in such classics as Leonard Part 6, Congo, and The Dukes of Hazzard movie.

His daughter is a welcome addition, who aligns herself with Jeff and the arcade goers instead of her father. Although we never see her goods, she does have a nice scene in a nightie. I’ll call it a win.

While there were never any uptight parents trying to close us down, I did receive complaints about some of our games. One milfy mother of two small children politely requested we not have games like House of the Dead in the arcade. I’m not sure if she mistook a teenage kid in a purple shirt as someone who had any bearing on what games were in the arcade, so I just told her I’d let my manager know.

Other than that, most of the parents were just pissed that their child could only manage to transform ten dollars into a piece of gum and a couple of Tootsie Rolls. To them, I suggested they teach their kids to play better skeeball. MIC DROP!

For some reason, the arcade in Joysticks used only tokens instead of quarters. The majority of our games would accept either, save for a few of the ticket games. One of the perks of working there was getting 8 free tokens every shift.

Some of the under the table perks were pocketing quarters that jammed in the slot and eating however much candy we wanted. At one point, I had quite the collection of stuffed animals in the back of my car, too, because I was 16 and didn’t have to take shit from anyone. That’s why!

The mall I worked at was a somewhat sketchy place during this time. I came close to buying ecstasy from a chick who worked at Claire’s, and other stores were peddling similar mind-altering substances.  We would also occasionally smoke a bowl in the back room or drive a co-worker’s car around to the Belk parking lot, toke up, and then pass the keys off to the next employee. Repeat until the shift is tolerable.

Smoke breaks were forbidden by management unless you were taking out the trash. While I wasn’t a smoker at the time, I did enjoy taking the trash bags of shredded up tickets to the dumpster, pretty much for the sake of walking past the graffiti on the walls that proclaimed, “There is a Psycho God. Wake Up!” Truer words were never poorly etched onto a cinderblock wall.

They Lied To Me

As the film would have one believe, arcades are a regular beehive of premarital sex. Sadly, this was not the case for me. I guess it could have been if I was willing to give it up to a co-worker who was missing her top teeth, was about 5’3″, 300lbs and most likely had an extra chromosome. Apparently, she was an ex-prostitute, but as the Sears mechanic and I would frequently ponder, who was desperate enough to pay for that?

The first assistant manager I worked with would ogle the ladies with me.

Looking back, though, he was in his early 40s at the time, so checking out high school girls was kind of fucked up for him. Knowing the snaggletoothed hag he went home to, though, I cannot blame him.

As previously alluded to, the arcade in Joysticks had a backroom designed for banging the arcade groupies that would frequent that establishment. Our backroom was much more pragmatic as it housed all the candy stocked up from Costco, a workbench, a desk, and a random assortment of pinball machine parts that were kept on hand in order to make bombs for Libyans.

To my knowledge, no sex definitively happened back there, but I heard a rumor the manager banged some guy, specifically not her husband, in the office. Also, there was a gay couple working there at one point who I assumed also consummated their love in physical form after closing, or maybe before.

The climax of the film is a showdown between Jeff and King Vidiot, the proxy of Mr. Rutter, to determine if the arcade will be forced to close. Up until this point Jeff has been saying he never plays the games, and we finally learn why. Thanks to Eugene, he is able to overcome his phobia and wins the game of Super Pac-Man against King Vidiot.

Our arcade would put on a monthly Tekken Tag tournament, but all the winner received was a poorly designed t-shirt and their picture on the bulletin board where we once crucified a plastic smiley face toy. However, all of these victories have an asterisk by them as the best player never partook in any of these tournaments. I never found out his real name, but people called him Vegeta because he had hair like the Dragon Ball Z character. My world was shattered when I found him working at the Taco Bell drive-thru the next town over.

At the end of the movie, Jeff is reunited with his grandfather and lost love. Meanwhile, nerdy Eugene finally loses his virginity to Mrs. Rutter, a closeted nymphomaniac. I’m not sure if our weenie of a district manager had a wife.

If he did, I probably could have boned her.

While I wish the arcade I worked at was like the paradise showcased in the movie, it was far from it. Granted, it gave me plenty of good stories to share, but it helped lead to a somewhat delinquent path I took during my teen years. In the end, I made minimum wage and could have banged a fat ex-prostitute if I wanted, and isn’t that what it’s really all about?

Anyway, Joysticks is available to watch, in its entirety, on YouTube, and the arcade I worked at no longer exists, being replaced with a Cinnabon and public restrooms years ago. But we’ll always have the memories…