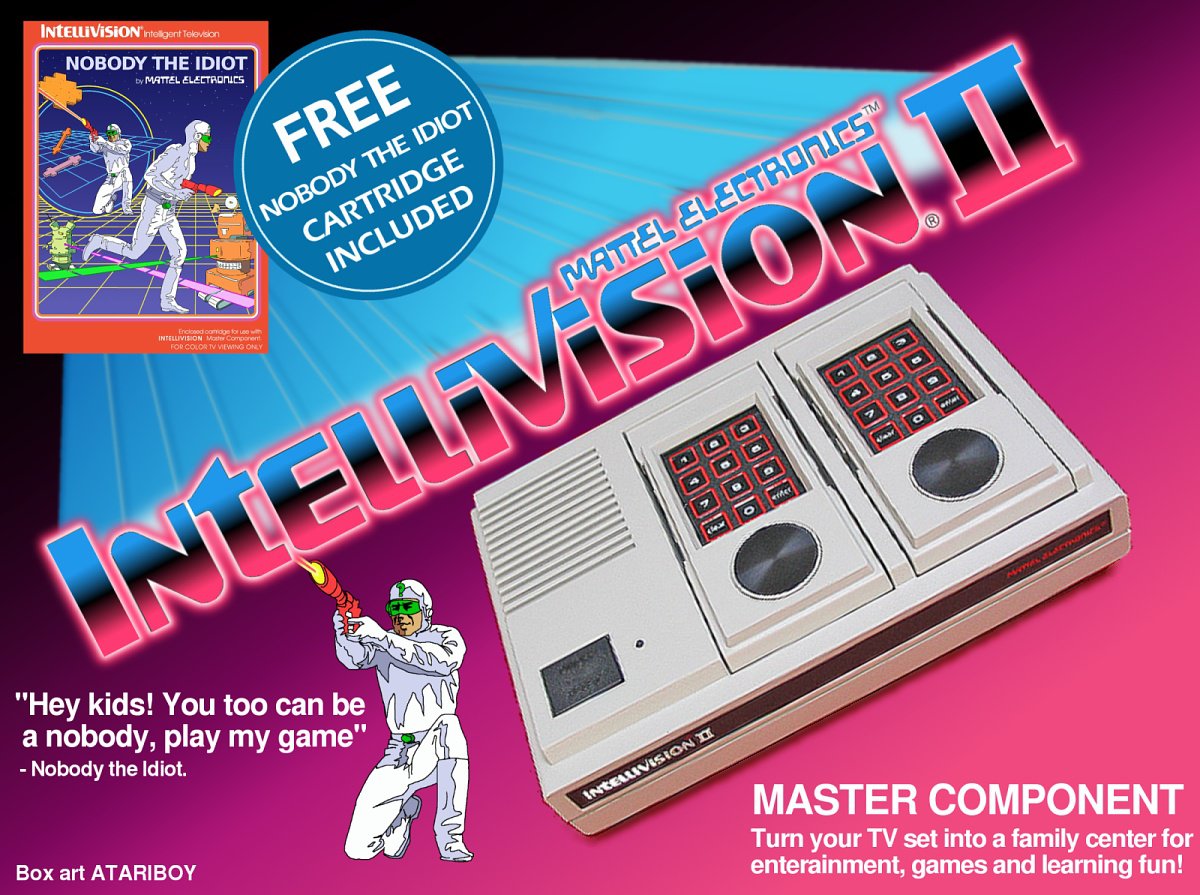 I was home from school for the summer in 1982 and I was watching something I’m sure was cool on TV that afternoon. I heard my parents fiddling with the keys outside the front door, so I jumped up, all action-hero like, to let them in.

In my Spider-Man Underoos, I flung the door open and the silhouette of my dad was standing there holding a box. The lens flare was so strong I couldn’t see the writing on it, but I would later find out that it contained “electronic” (say it in a robot voice) nostalgia and the ticket to my social success.

It was the Intellivision gaming console from Mattel Electronics and I was about to be THE coolest kid in the trailer park. As a matter of fact, I was going to be better than most of you, at life.

I had heard about this one. It was famous, but no one that I knew had one. It was too cool and expensive for the average Sub ‘Burb dweller. Yet, here it was in my home and I couldn’t wait to tell everybody I had it.

Of course, I dove into the box right away.

My dad was trying to hook it up and he would get frustrated and slap me in the back of the neck, telling me to “MOVE!” I’m pretty sure he had to go to Radio Shack and get some little connector for the antenna, which pissed him off more. So what.

Then There Was You

Your adopted parents probably came home with an Atari 2600, thereby cursing you and your future kids with shame and loneliness for all time. You probably sat there eating a cold Vienna sausage off a Tupperware plate, with your one dumb friend, fapping your joystick to an erratic blinking screen. You had a spoon within reach in case you seizured up.

You couldn’t really control shit on that small TV. You could smell the death of your social life and you could feel The Suck consume you as you realized you were nothing but a meat bag holding in farts. You lived in a hotel.

YOU? You Were Losing!

Me? I Was Fucking Winning.

That next weekend my parents weren’t home. So I rolled the trailer windows hard shut and my AC was on blast as me and my many friends partied hard, shot fireworks from our anus and conquered each level of gameplay like the winning warriors we were. It was F’n RAD!

We had high school chicks over and everything. Beer. Cheezwiz. I was 9 years old.

Yeah, that was just a touch of the awesomeness that Intellivision could bring to your life.

In fact, it could “change your life.” And that’s what the folks at Mattel Electronics told us in their ads anyway. Mattel Electronics used phrases like, “sophisticated”, “the closest thing to the real thing” and “lifelike” to describe their console and our greedy little brains sopped it up.

Then Mattel Electronics started using this jerk for advertising. (I’m sure he was a nice guy.)

Introducing George Plimpton, Mr. Intellivision himself, with his smooth sophisticated voice that would utter those call-to-action words and would tell you how much smarter you were by choosing to play this console. He was a prolific American Journalist and amateur sportsman after all. So why not heed his astute words of choice and scientific evaluations?

I was proud to have someone of his prowess on my side to tell me what a great decision I made.

Taking his advice, it wasn’t long before I acquired and played all of the best games that Intellivision had to offer. Like Astrosmash, Advanced (advanced I said) Dungeons And Dragons, Pitfall (better version than Atari), Tron, Q-Bert, Space Armada (my fave) and let’s not forget NFL Football whereby you had to be smart enough to code in each play.

The games were exciting stuff as each pixel beeped and bloomed across a matrix of creative genius and my little kid brain could not figure out how this was happening. Even though I was smart.

What unearthly force wielded the power to possess a box of plastic with such magic? (say that fast!)

Who was responsible for this game-changing badassery?

Now, 39 years later we’ll travel back in time to take a peek into the cauldron of enchanted ingredients that delivered that magic spell.

Ok? Strap in and let me drive. I’ve only had one beer.

Or, you can sit there alone, stay uneducated, eating your bag of mayonnaise poppers in your cotton white fruity’s filled with body stew. Burning… not…one…carb.

Now, Let’s Go Get Some Smarter…

“The name Intellivision is a portmanteau of “intelligent television”

Man… It’s already happening. Can you feel it?

How often do you use the word portmanteau in a sentence? Our intellect is already beginning to increase and our gaming acumen is becoming razor sharp.

Intellivision was created by the largest toy company in the 1970s, Mattel, based out of Hawthorne, California along with Mattel Electronics’ line of handheld games. Seeing the money numbers and units sold by other companies at the time, mainly like Atari VCS (2600), Mattel decided to get into the home video gaming business themselves.

Mattel was looking to develop a gaming system that had lifelike graphics and longer-lasting gameplay. For that, they turned to the company National Semiconductor. The chipset that Mattel had their eye on was new, yet apparently too expensive. It wasn’t long before they released the lawyers and negotiated a better price for the chip, but the design had to be simplified to cut those costs and NS obliged.

Then Mattel stabbed that company in the back after they wasted everyone’s time and went with an even lesser chipset from another company, General Instrument based out of Pennsylvania. This lesser GI chip would turn out to lack re-programmable graphics, but Mattel worked with GI to change it and after many months of development in 1977, the Intellivision was born.

In 1979 Mattel decided to start test marketing the console in Fresno California with four games to a great reception. After some golf clapping, Mattel released Intellivision Nationwide in 1980 with a starting price of $299 and that included Las Vegas Poker and Black Jack.

Then, in the 3rd quarter of 1982 Mattel launched the newly redesigned Intellivision 2, replacing the 1970s style consoles.

Mattel would go on to sell over 3 million units from 1980 to 1983 until the home video gaming industry started to go bust. Then, in 1984 Mattel sold Intellivision to a bunch of executives and investors, who are always very creative and talented professionals working in the best interest of the employees and products.

They used their genius to rename the company INTV Corporation and the system had a menial run utilizing a mail-order only strategy until the Intellivision was canceled altogether in 1990. Way to go team!

Intellivision was Mattel’s only gaming console until they released the Hyperscan — I never heard of it — in 2006. This one was D.O.A.

To date, Intellivision has been ranked the 32nd best-selling video game console of all time as well.

Ok, I’m done. The roller skates are off and I just slammed a box of Nerds.

I’m guessing most of you didn’t turn out to be such losers after all. Truth be told, I still ended up being the only kid with an Intellivision and my friends really didn’t like playing it.

While the gameplay was most copasetic, many people — mostly the kids my age — did not find the hand control to be all that great. It was like playing with a telephone in your hand and we kids really wanted to recreate that genuine arcade feel at home with a joystick. I think Mattel really missed the mark on that one.

The games for Atari would suffice for most of us and let’s face it, Atari did a much better job at marketing their system and games. They really did.

Mattel was just trying to feed into the social sentiment of the day during the 1980s by trying to be prudish and stuck up. Back then it was all about what you had, as you watched all of the $24,000 a year millionaires overspend just to show out. I get that though. I understand it and people still do it today, but in that decade that’s what you did and you had to be a winner.