The N64’s lifespan straddled the time between the Original Star Wars Trilogy and the Prequel Trilogy perfectly (not unlike your mother on anyone with two nickels and a dick). Although the two games focused on the Original Trilogy were classics, once Episode I released, we could say goodbye to the possibility of any games taking place in that timeline on the system again. That is not necessarily a bad thing, as this opened up an endless amount of possibilities.

Whenever I had an extra five bucks, I would hop on my bike and pedal down to the mall to catch a matinee, often being the only member of the audience.

What kept me coming back week after week? Liam Neeson’s portrayal of Qui-Gon Jinn was definitely up there, and as my intellect was budding, the heavy-handed symbolism of Anakin’s birth paralleling that of Jesus made me feel smart. However, the two biggest reasons were the kick-ass duel between Qui-Gon, Obi Wan, and Darth Maul, and, of course, the pod-racing scene.

When people reflect on their favorite games for the N64, it’s a foregone conclusion that they will pick one of three titles: Super Mario 64, The Legend of Zelda: Ocarina of Time, or Goldeneye.

While these games are definitely classics, possibly even candidates for greatest games of all time, they limit the scope of what was available on the system. Although its library was small, especially compared to the PlayStation’s, one could argue its percentage of good to great games is the highest of any system. Episode I: Racer is a title that deserves recognition as one of the best on the system.

Upon the game’s initial release, I don’t remember much buzz about it. It got decent reviews, but I was able to pick up a used copy fairly cheaply not long after it came out. It could have been an Atari 2600 situation where they printed more copies than they had systems, so they were trying to get rid of all excess stock. Someone was banking on this game, though, as it even received its own N64 bundle. 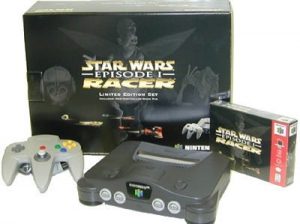 Another factor could be the game’s necessity for the memory expansion pack. In Rogue Squadron, enjoyment could be had without the add-on, but I would not attempt even trying the game without the expansion. While the full game can be played without it, unlike Perfect Dark, it takes such a hit in the graphics department that it could sour the experience. With the expansion, though, it’s one of the best looking games on the system. Seeing as this was still a fairly new product, most consumers may have still been unaware of its existence.

On paper, it sounds like a standard racing game. At first, the player has a limited amount of racers and tracks to pick from, but as they progress through the game, they end up unlocking more.

One of the neat features is picking how to divide the race winnings.

For tracks where players are confident, they can choose a winner takes all approach, and for the ones they aren’t quite as sure about, they can choose to divide the purse more evenly. It may just be my perception, but the payout selection seems to adjust the aggressiveness of the other racers.

For the early stages, I definitely advise using the winner take all approach and building up your pod in Watto’s shop with your winnings. Aside from new parts, players can also look around the junk yard for deals. The parts upgrade various aspects of the pod, such as speed, braking, repair, etc. Pit droids can also be purchased to help maintain the pod.

When it comes to racing, there’s a lot more to consider than pressing the gas and going in a circle. The pods have a boost capability, but like Excitebike, can cause the engine to overheat and catch fire if used for too long. The pods have a repair function, too, but using this feature will cost a bit of speed.

A lot of people shit on the N64 controller, but the off kilter design adds to the immersion of the game. Using the control stick to build up the turbo and then releasing it is as close as I’ll get to the feel of piloting an actual pod racer, outside of the arcade game which I’m convinced is just a myth. I’ve played this game via emulation with an Xbox 360 controller, as well as the Dreamcast version, and nothing compares to the feel of the tri-pronged N64 stick.

I’ve already mentioned that game is one of the prettiest on the system, but perhaps even more impressive is the game suffers very little game play issues, even when the racer is chugging along at over 600 mph. I’m not a big framerate whore, but I notice very little that takes away from the game’s breathtaking aesthetics. Compared to other racing games on the system, nothing can match the visual flair and sheer sense of speed. 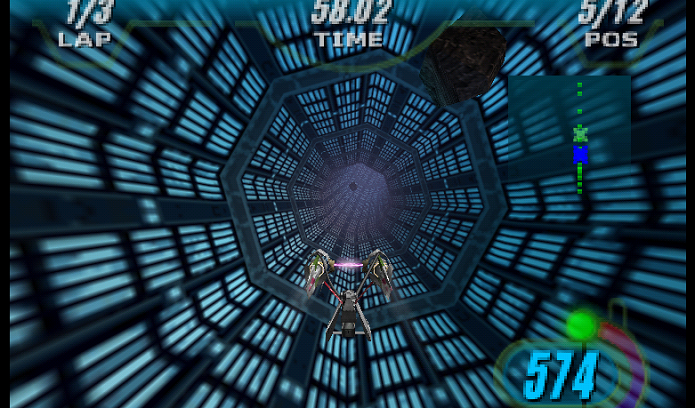 The track selection is another great feature. Throughout the game, the player will traverse the galaxy, racing across a variety of locales. The game starts off on Tattooine, but the player is quickly whisked away to other systems previously only mentioned in passing: “There is podracing on Malastare.”

Each offers their own unique environment, and my favorite is the snow-covered Ando Prime tracks. Along with other racers, the player has to frequently contend with environmental factors of the tracks, such as earthquakes, that can change the course and open hidden pathways. Discovering these is both fun and vital to advancing. 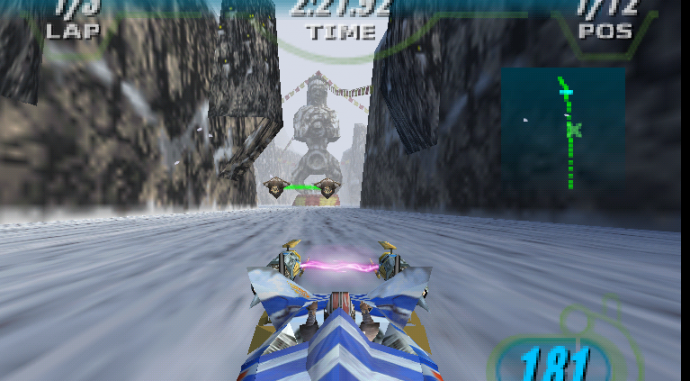 An aspect I rarely mention is sound in games because I play most of them on mute while listening to YouTube videos. However, if there is one game that deserves to be unmuted it’s this one. Drawing from a number of the famous Star Wars musical scores, the compositions are immediately recognizable and elevate the racing game even further. There’s nothing quite like being in a heated race while “Duel of Fates” echoes in the room.

While the game does a majority of things superbly, I’d be remiss if I didn’t point out its flaws.

For one, the pods appear to be made balsa wood, doused in gasoline, and then Buttman farted nearby. I understand crashing headfirst into a giant rock will cause the racer to be destroyed, but at other times it happens quite unexpectedly. Due to the tight corridors of the tracks, crashing is expected and frequent. It’s not a complete deal breaker, but it breaks up the feeling of immersion when I was cruising at top speed to suddenly have my pod disintegrate because another racer grazed me.

While I generally like most of the tracks in the game, some are so sprawling that it makes determining the best path for a race difficult. This can lead to frustration when it’s the third time through a race and I still haven’t cracked into the top ten. Another issue that plagues a number of N64 games is the textures tend to blend together, which can make identifying a secret path that much harder.

Overall, these are quibbles and shouldn’t dissuade someone from trying the game out. Of the four Star Wars games on the system, this is usually the cheapest, so you shouldn’t have to pay over five dollars for it. Although it’s the least expensive, it is a steal at any price. There is also a Dreamcast version that is pretty much the same, but it features longer course introductions with commentary from Greg Proops for all you Whose Line Is It Anyway? fans.

You Were The Chosen One!

The game would receive a sequel on the PS2, but it didn’t have any of the appeal the N64 game had. Instead of Jack Lloyd’s Anakin, the player could now play as Hayden Christensen’s version from Attack of the Clones, along with some other random aliens and unlockable characters. Whatever magic was present in the first game is nowhere to be seen here. This game feels like a generic racing game and doesn’t give me the sensation of piloting a pod-racer. It’s worth checking out if you are a fan of the first game and can find it cheap; otherwise, you’re not missing anything.

A kart racing version, Star Wars: Super Bombad Racing, was scheduled for release on the Dreamcast but got pushed to the PS2. If you ever wanted to play as a super deformed version of the characters from Episode I in a Mario Kart ripoff, here you go. All others, stay away. 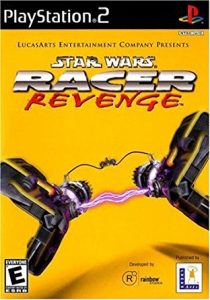 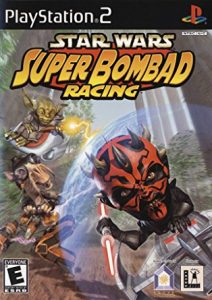 In the dying gasps of the vehicular combat genre, Star Wars: Demolition was released on the Dreamcast. I’ve never played this game, but since it is a vehicle based game, I thought I would mention it here. From what I’ve read, though, this game and WWE Crush Hour are vying for the title of most needless cash-in using this style of gameplay.

Since then, Star Wars racing series has been dormant, and I’m fine with that. Like Homer Simpson claiming Rock and Roll achieving perfection in 1974 is a scientific fact, the same can be said for this series with its first release.

The first game did everything so well that there was never any need for a follow-up.

Check out Part 1 of This Series Here