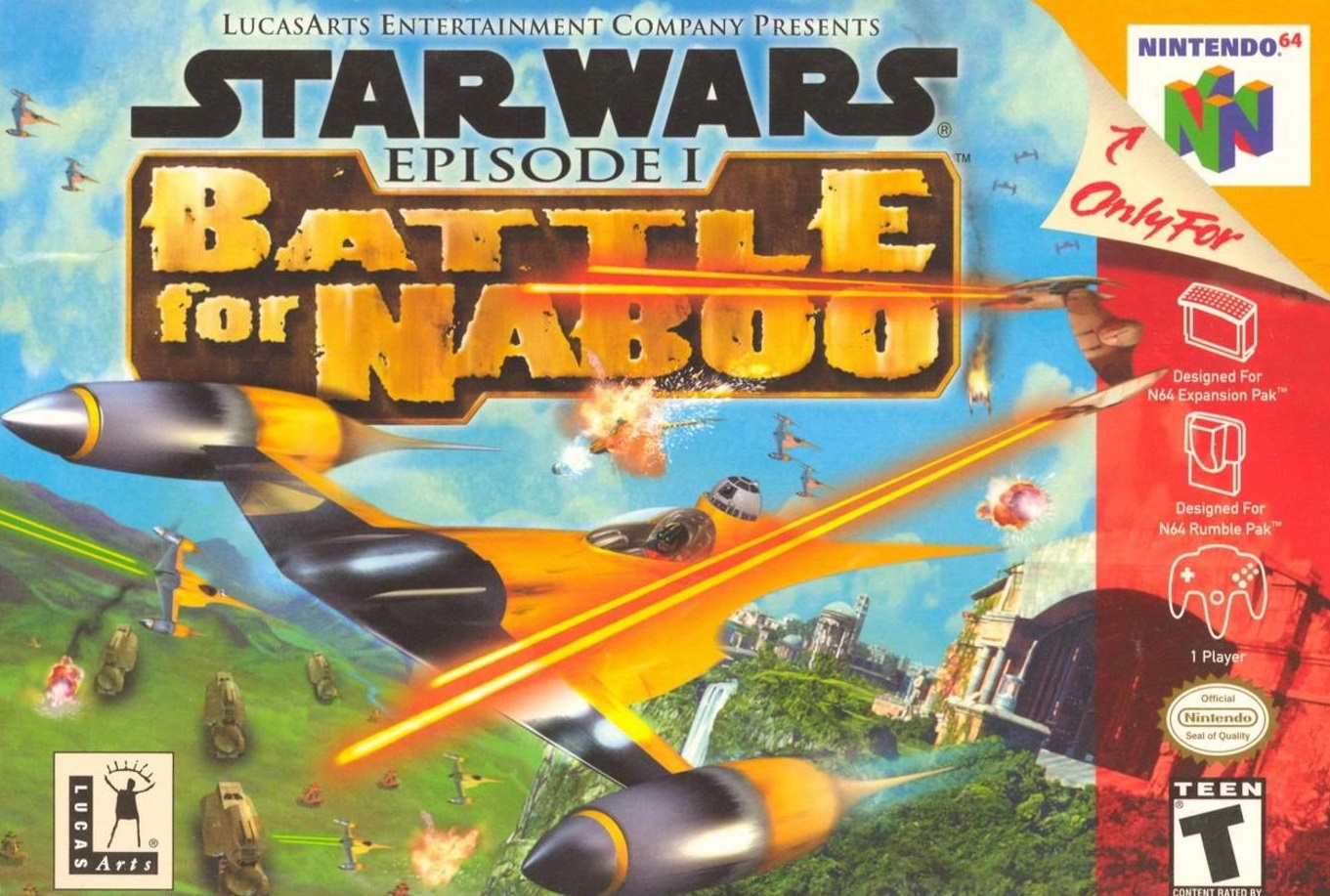 Before getting into this review, let’s catch up on the story to this point:

In the dying days of the N64, there wasn’t much left on the system that grabbed my attention. I was 17, and most of the interests I had at the time were better reflected in the titles the PlayStation was offering. The last game I can remember really getting into on the system was Conker’s Bad Fur Day, but that was due to the obscene raunchiness that was unlike anything else on the platform. However, once the allure of a sunflower with giant tits waned (yes, it can happen), I was ready to put the old girl out to pasture.

What I didn’t know then was systems frequently have some interesting titles released at the end of their lifespan because developers have learned all the programming tricks to get the best performance from the console. The PlayStation offered an exciting new level of play with the WWF SmackDown! series that was just taking off, but the N64’s WWF No Mercy is often heralded as the best wrestling game of this era.

Unfortunately, I missed out on it due to being a teenager with limited funds, and the PlayStation titles were less expensive and closer to my teenage sensibilities. Battle for Naboo succeeds on a technical level, again in part to the memory expansion pack, but as a game, it’s a bit lacking.

Releasing more than a year after the movie it was based on, Star Wars Episode I: Battle for Naboo was one of the last hurrahs for the system before being unceremoniously dumped with the launch of the GameCube.

At the time, though, it was too little too late, as this game feels more like a DLC add-on to the original Rogue Squadron rather than its own game. Since Factor 5 games are difficult to emulate, I never got the chance to play this game until a few weeks ago when I broke down and bought it for this series of reviews. So while I’m proud to say I own all of the Star Wars games that were released on the N64, this is definitely not a case of saving the best for last.

That’s not to say it’s a bad game; it doesn’t necessarily do anything wrong. Battle for Naboo is quite adequate and offers players more vehicular action in the Star Wars universe. A year after the release of the Phantom Menace, though, most had moved on, and the game doesn’t offer nearly enough new gameplay to make it interesting for diehard fans. 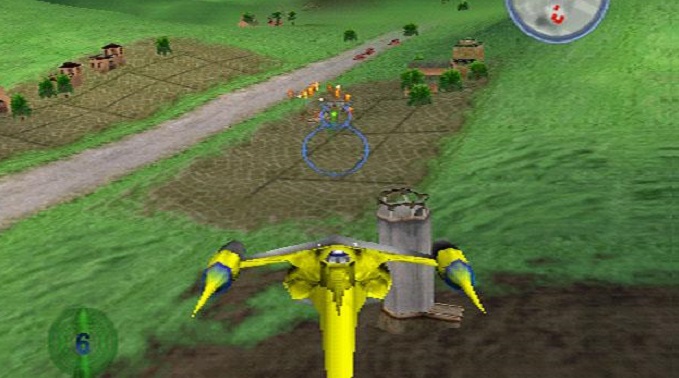 Battle for Naboo continues to offer the spacecraft battles that made the first game memorable, but this time it adds land and sea based vehicles into the mix. Instead of keeping the game fresh, though, they keep me asking when I can get back into my Starfighter. Some of the speeder based levels are fun, but the boat levels bring the game to a halt quicker than discussions of the taxation of trade routes to outlying star systems.

The graphics are fine, if not a bit uninspired. The lush greens of Naboo really pop, but enemies are a bit too small and undefined, and I often found myself shooting at my fellow soldiers. I’ve never really found the design of the regular droid soldiers particularly interesting, and mowing down heaps of them quickly gets old. In the space based levels, I’m not even sure what I’m supposed to be shooting at sometimes. 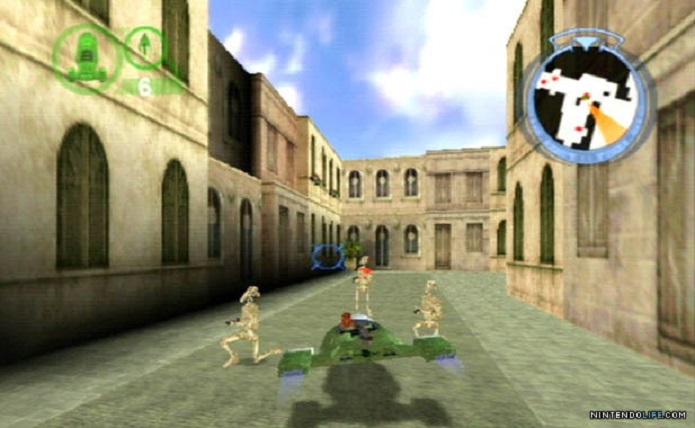 The game play tends to suffer a bit from bipolar disorder, as it switches from Far Too Easy to Ass Rape at about the mid-point in the game. In the earlier levels, I didn’t mind replaying parts because it was a bit fun, and I knew my mistakes.

Later, it’s hard to know what I’m supposed to be doing, and the Game Over screens come quickly because I wasn’t defending the right base or something. During my first play through on the final level, I immediately lost a life because a horde of enemies flew at me. I expect it to take all the skills I’ve honed throughout the game, but this felt unfair because there is no way to know that’s coming without playing it before. 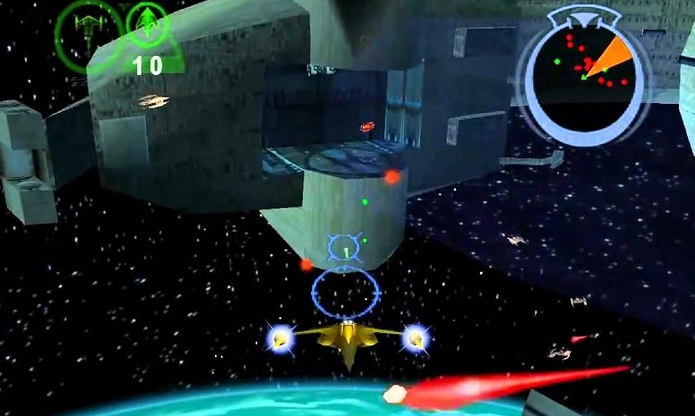 Overall, there’s nothing truly memorable here. I appreciate how this game tried to expand on the story of the battle we only glimpsed in the movie, but it doesn’t have that epic feel of traveling the galaxy to take down the Empire that Rogue Squadron offers. Reflecting on my time playing the game, the parts that stand out the most are the Game Over screens that basically tell me I’m worthless, much like the NES Friday the 13th Game Over screen.

I may be treating this game unfairly, but when a game that released two years prior did everything this game does, and in nicer package, there’s really no reason for this game. If you have strong nostalgic feelings for the game, it will probably help you find more enjoyment, but playing it for the first time in 2018, it makes me just want to go back and revisit Rogue Squadron.

As people pointed out in the Episode I: Racer review, the PC port of that game is released on GOG.com, as well as Rogue Squadron, but it doesn’t look like Battle for Naboo is up there. The N64 cart goes for just over ten bucks, and I paid about $13.00 for mine off Amazon. This is probably the most expensive of the N64 games, by a couple dollars, but I would suggest only picking it up if you’re looking to complete the set.

Looking Back At The Beginning

Reviewing these last two games has made me a bit nostalgic for the era of the prequel launch. Bringing up Episode I in conversation, though, will prompt most people to immediately bash on Jar Jar Binks (how original).

The developers were even aware of this hatred as the title screen for the game starts with everyone’s least favorite Gungan being squashed by a giant N64 logo. I’m sure everyone thought this was hilarious back in the day, but it feels like yet another tired joke by today’s standards.

Even before Disney bought LucasFilm and fucked everything up beyond repair, I had quite a fondness for The Phantom Menace. It was my first Star Wars experience in a theater, so it’s probably as close as I’ll ever get to understanding what it was like for those first audiences seeing A New Hope back in 1977.

For me, Star Wars has always been about Jedi, so seeing the order and the height of its power was something cool to see.

This wasn’t a couple of nomads hanging out in huts at the edges of the galaxy; they walked freely and were forces to be reckoned with. The Jedi we spend the most time with, Qui Gon Jinn, is one of my favorite characters in the whole sage. He believes in the order, but he knows its strict dogmatic approach to the Force that has been maintained over 1,000 generations must evolve in order to survive. 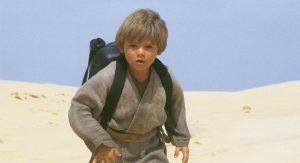 Much like the original film, it’s one of the only other films in the series that can stand alone outside of the greater series. At its heart it’s a simple fantasy story about a young boy learning he is destined for something greater, and if we never got another Star Wars movie after this one, the younglings who watched it would spend countless summer days fantasizing about the future stories of Anakin and Obi Wan.

Battle for Naboo shows players the possibilities of the sandbox Star Wars provides. Though it is a forgettable game, we can trace the evolution to the Battlefront series from it. The franchise has proven to be versatile, and there’s enough media to satisfy the multitude of fans. Though we may quibble over the weak links in the series, there are enough points where everyone is in agreement… 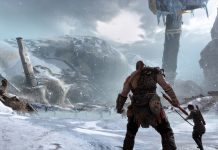 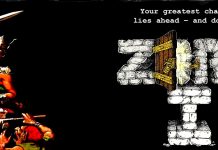