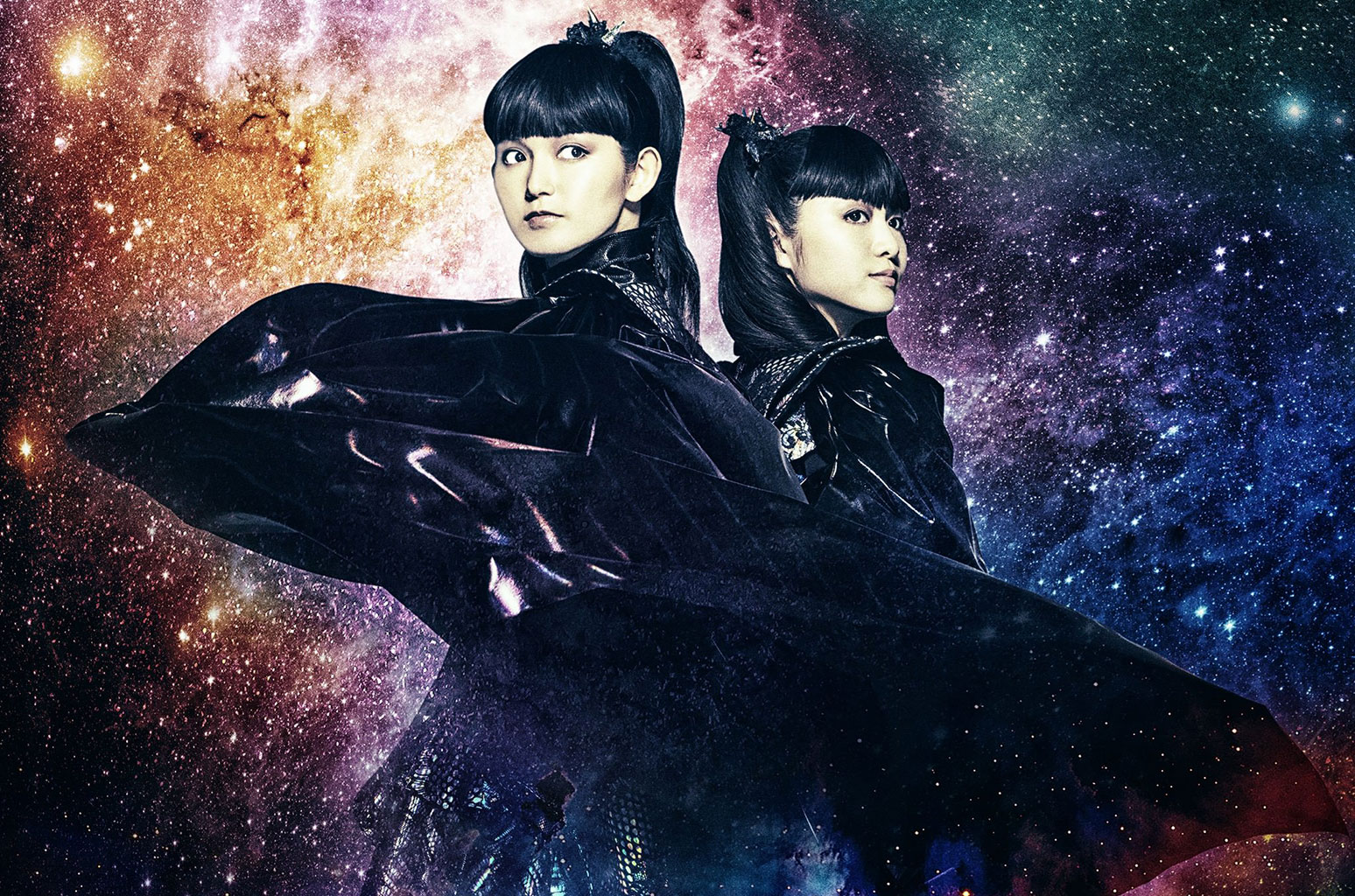 It’s time for a lesson about your new favorite musical obsession.

All the way from the land of the rising sun comes Babymetal! 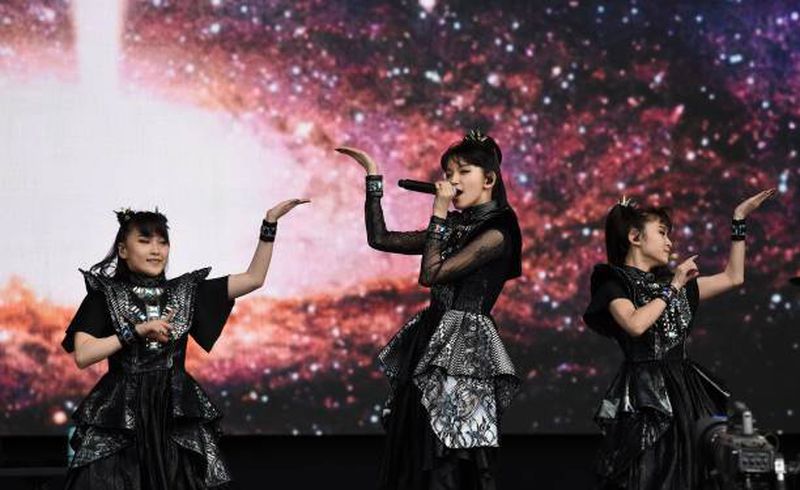 What The Hell is Babymetal?

Babymetal is a Japanese all-girl heavy metal group whose first album came out in 2013. Though they originated in Asia, over the past few years they have developed a worldwide following and opened for such headliners as Metallica, Guns n’ Roses, and Rob Zombie.

People either absolutely love them or they hate them and think they should not exist. 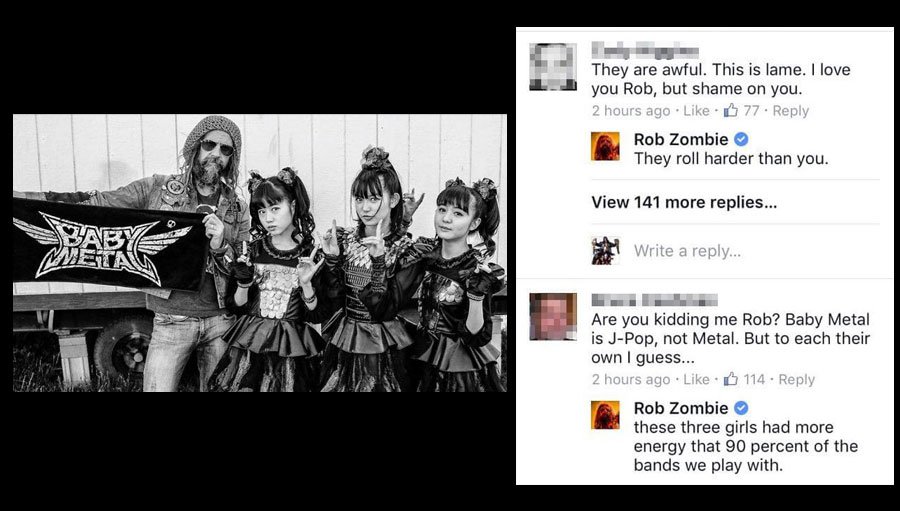 If you liked playing “Through The Fire And Flames” in Guitar Hero 3, then you would like Babymetal. I found them on Spotify one day and thought they were pretty good.

Then I started to google them and found what the band was really like.

Originally the group consisted of three girls who all use the moniker “metal” in their name (kind of like The Ramones): Su-metal, who does lead vocals, and Moametal and Yuimetal, both of whom do background vocals and were officially called the groups “screamers”. Yuimetal left the band earlier this year, so it’s now a twosome.

And don’t worry, they are all now in their 20s and can go drinking. 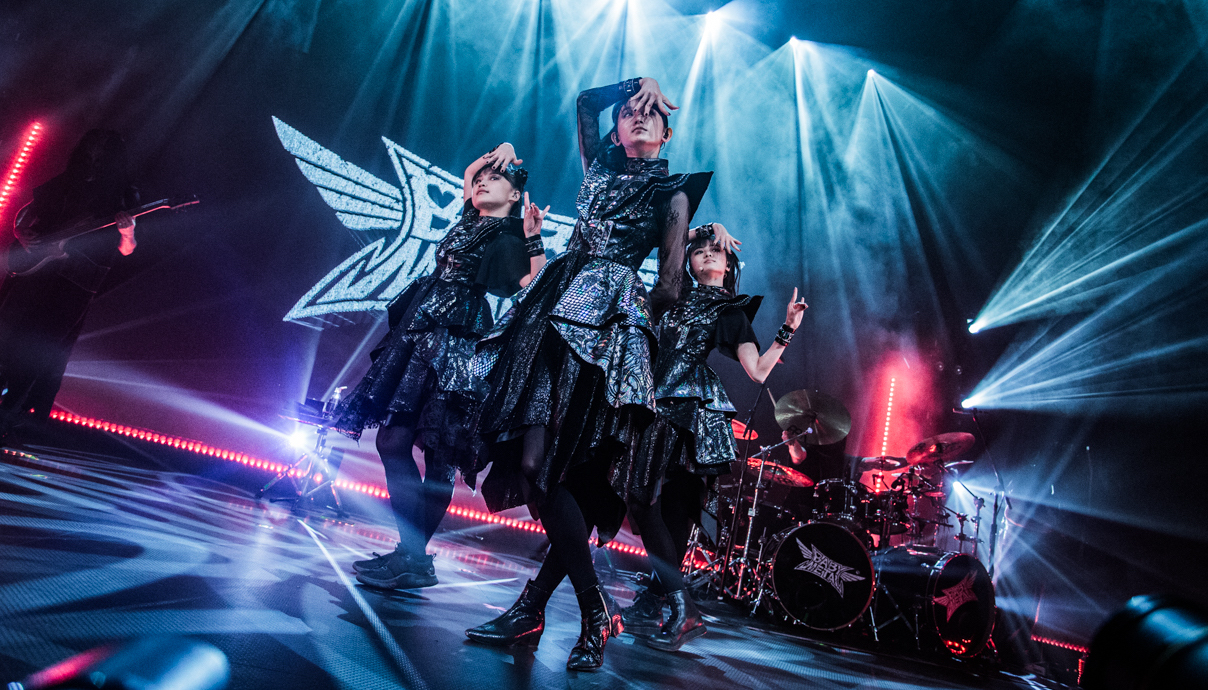 Despite being a metal band, and because they’re ultimately a girl group, they incorporate dancing into their songs. Add in a bit of Alice Cooper into the mix, you get a pretty good idea of what their stage act is like.

Yes, They Are a Girl Group

OK, calm your tits for a second.

Yes, they were created to be an all-girl teen group who competed with all the J-pop bands out that are singing and dancing, but with the twist being that instead of pop, they would perform some pretty hardcore music.

But a funny thing happened. Their music started to appeal to core heavy metal fans and they now have a loyal following among the global heavy metal community despite their songs being written in Japanese and most fans having no idea what they are singing about.

Their newest album, Metal Galaxy, even debuted at the top of the US Rock Chart on Billboard a couple of weeks ago.

You may never have heard of them, but they are now a major metal act. Last month they sold out the Forum in LA.

They are the originators of Kawaii metal in Japan, which is a mix of metal and pop, and have had a number of imitators come forward as a result of their success, such as Ladybaby and PRITZ.

As their intended audience changed, so did their music and image. Originally they were quirky and dressed in the traditional schoolgirl outfits you normally see in Japan from teenagers. All the weird stuff you would expect from an act like this is on display in their first video, “Doki Doki Morning”.

The other hit from their first album, “Gimme Chocolate”, is about, well, wanting chocolate. Though the video is more of a traditional performance video, it’s topic is more in line with what you would expect from the band at the time and probably their most recognizable song.

“Karate” is from their second album. It has a nice grunge feel to it that sounds kind of like Alice In Chains.

You can also tell they are becoming more successful because they clearly started spending a lot more money on this video than the other two.

You’re probably all wondering how to do that dance. Well, look what I got for you…

In Japan, foxes are a big part of the culture and the image of a fox could be found everywhere. Children used to be taught to not speak to strangers in the forest because it may be a fox in disguise who wants to harm you.

The band plays on this part of the culture and has this whole thing in their act where they claim to worship the “fox god” and dedicate their music to it.

It’s kind of silly, but it’s clearly just part of the act so they kind of run with it.

One of their songs, “Megitsune”, is about the band’s relationship to foxes.

If you kind of see a bit of KISS in them with how they market themselves, then you’re right, because the band even had its own graphic novel, Apocrypha, come out earlier this year. 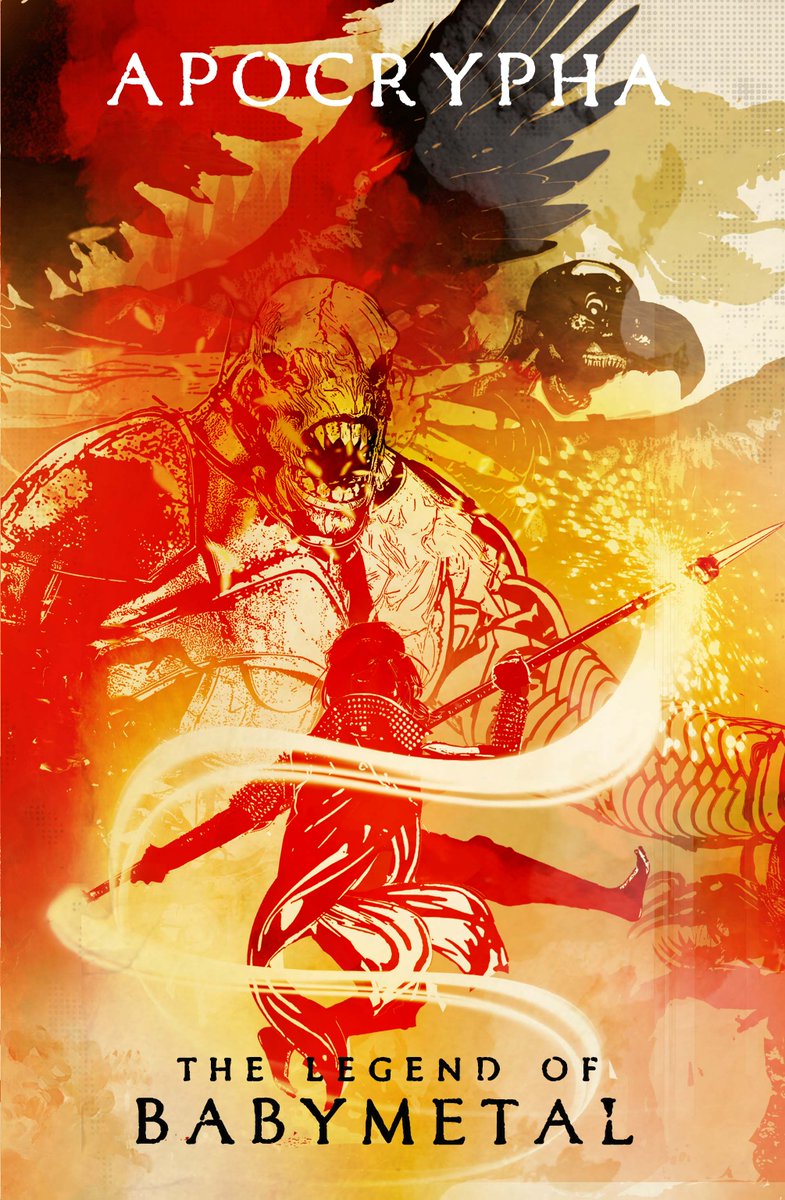 Discover the myth of the worldwide music sensation BABYMETAL. Tasked with defeating the forces of darkness and division, the metal spirits must travel through a variety of eras of time, assuming different forms and identities. What we are seeing is not the BABYMETAL of the present. It’s the original story based on BABYMETAL you’ve never heard before. The long-hidden metal spirit’s apocrypha of the METAL RESISTANCE will emerge. 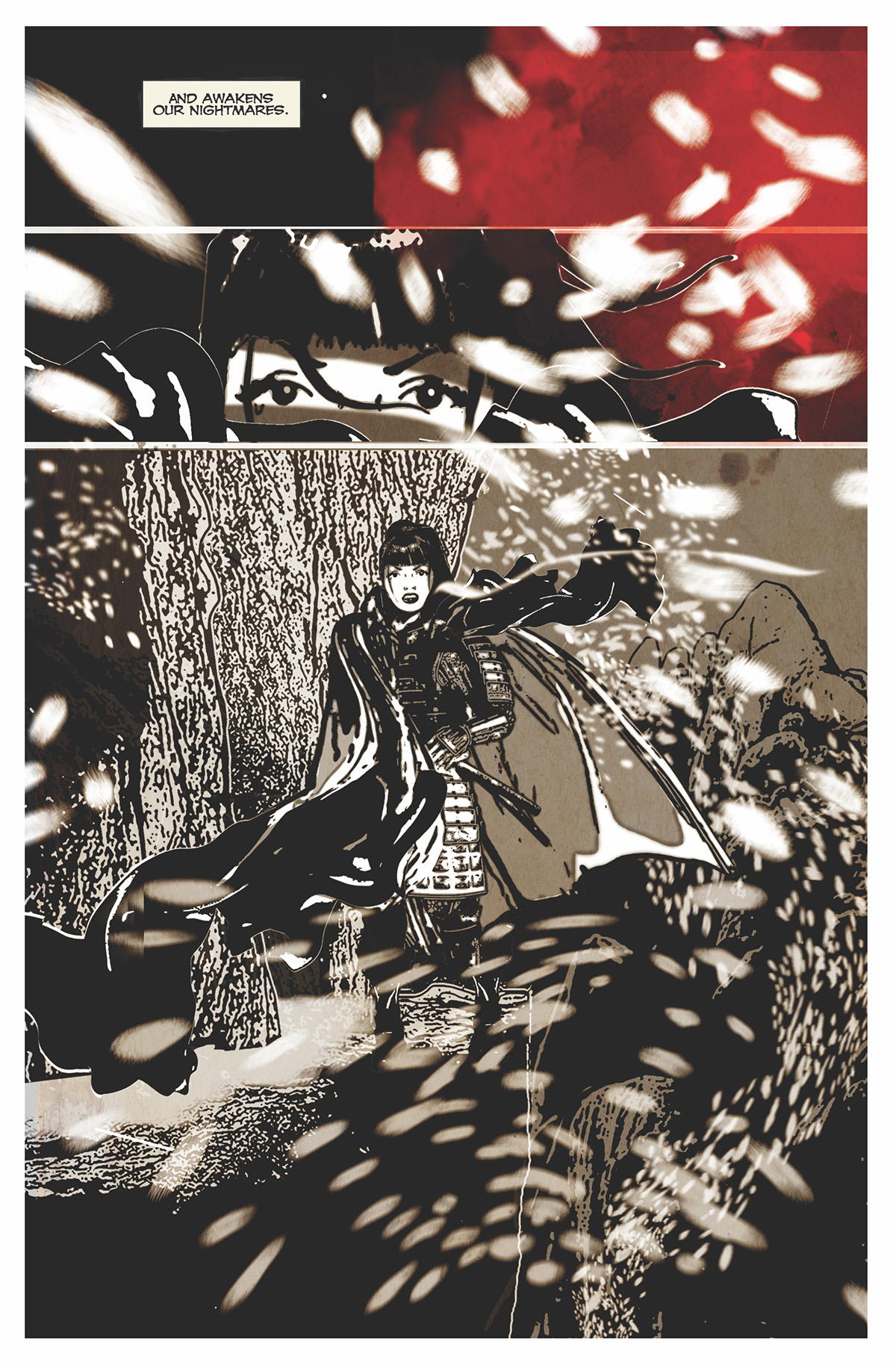 It’s probably easy to gloss over them because of their background and what their act is like, but they are legit performers and put a lot of work into their shows. And unlike a lot of musicians these days, they actually sing and do not lip-synch.

They also dropped the whole schoolgirl thing and have pretty much committed to all black leather.

Anyway. Give them a try on Spotify or whatever you listen to.

They’re not going to get into the Rock And Roll Hall of Fame, but they may suck you into YouTube for a couple of hours.