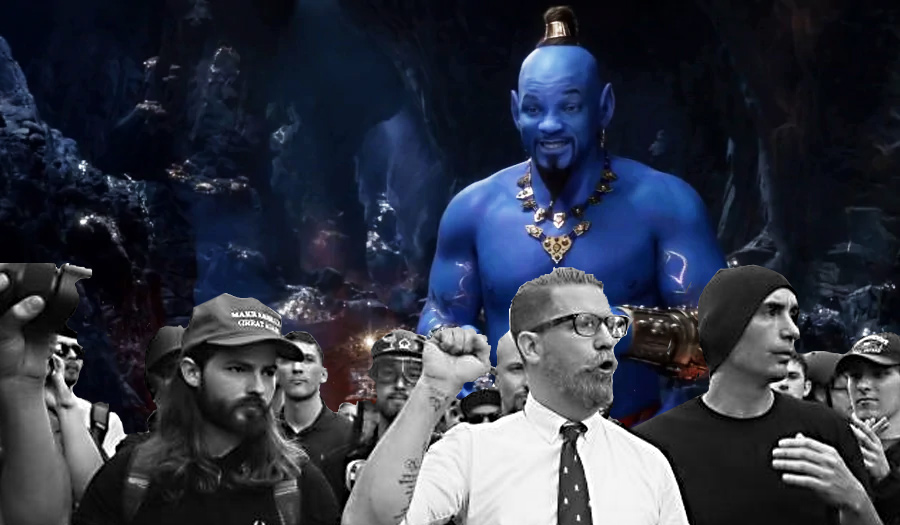 As readers of Film Goblin know the origins of the Proud Boys, a  dorky men’s club that gets in fights with Twitter communists, are deeply rooted in the racist and misogynistic ideals of Disney’s Aladdin.

When Gavin Mcinnes— an alleged white supremacist who is married to a Native American — founded the Proud Boys, he took the name directly from the title of this hate-filled song about living up to your potential:

Remember folks, according to Wikipedia we’re talking about a “far-right, neo-fascist” group that literally “beats in” new members by physically assaulting them… until they can name five breakfast cereals.

And Now They Are Angry…

Imagine if you were a bunch of multi-cultural brownshirts whose entire founding mythology is based on Aladdin and then Disney goes and drops this on you:

Forget the Proud Boys for a second… who the $%^& is that supposed to be?

Dollar Store Thanos? I wish someone could snap and make half of these Disney Studios adaptations go away.

It looks like Captain Planet and Mr. T had a love child.

Or a Navi and Clean Gainz Smurf?

Now I am angry! Where’s my yellow vest?