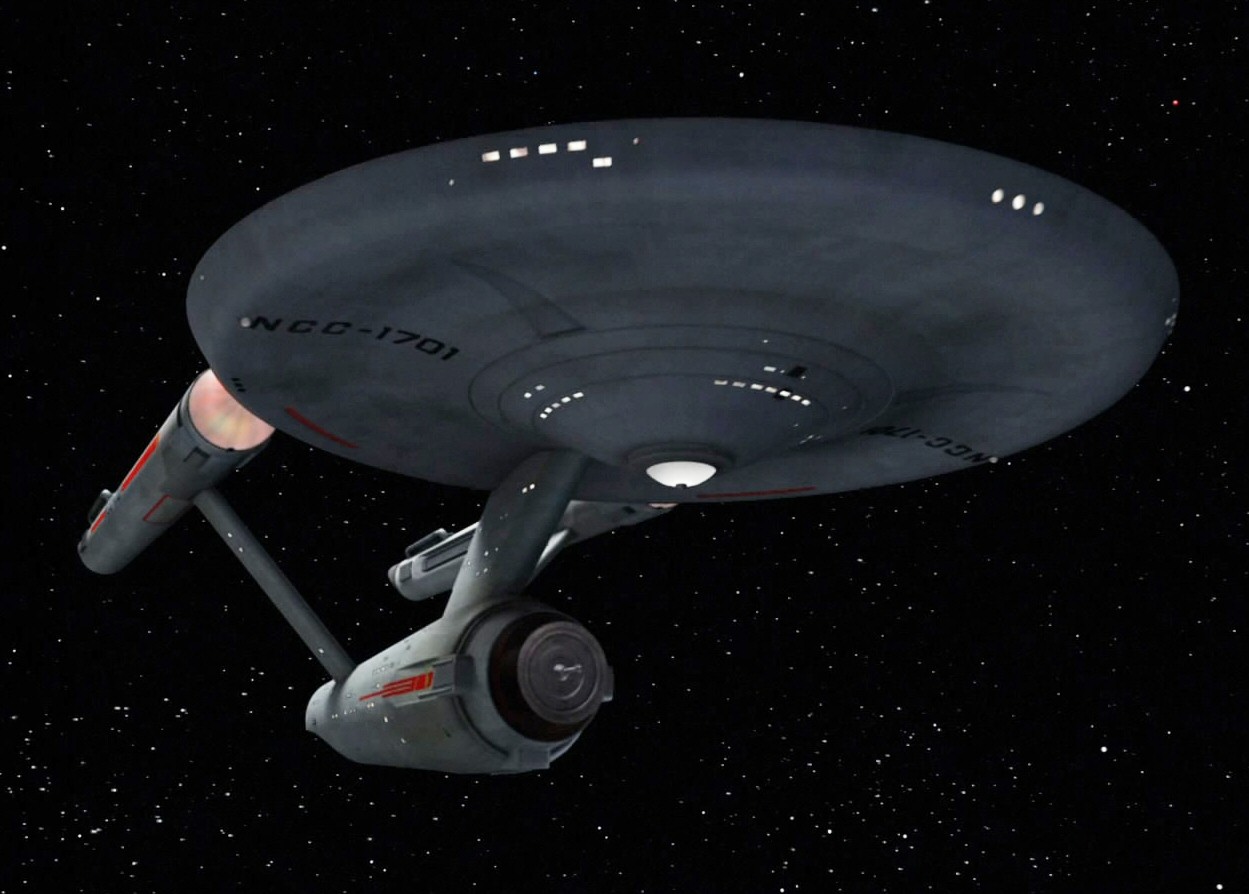 In the world of Star Trek, Starfleet is the intergalactic, naval, exploratory battle-force.

Many, anti-military, Commie wacko Trekkies cringe at this fact but before Roddenberry became a born-again, hardcore pacifist liberal in his later years, he was a young B-24 pilot raining tonnage on Dresden in WWII.

In fact, just about all the significant brains behind the real Star Trek, the original Star Trek, were WWII vets.

Gene Coon, arguably as responsible for the best of Star Trek as Roddenberry was a Marine who saw action in Korea. Matt Jeffries, who designed The USS Enterprise, was a WWII bomber vet who also served as a bomber in flight engineer and designer.

And Scotty himself, James Doohan was a decorated fighter pilot who lost two fingers at D-Day for the Canadian Royal Air Force.

These guys weren’t hipster pussies sipping soy lattes and ragging on yucky middle Americans as they rifle through their man purses for Ritalin. They were men.

They saw wonders and terrors, good and evil.

They saw and participated in the United States saving the world from the vile evil of the Japanese and German empires.

They saw the atom split, man break the sound barrier and rockets hurtling into space with men strapped into tin cans on top.

All of these technological and scientific leaps were born from American military advances. So it’s no small wonder that real Star Trek, The Original Star Trek, was set in a “good and altruistic” military setting.

When it came to imagining Starfleet, naturally The US Navy was the impetus.

The Enterprise NCC-1701 was the future version of the mighty CVN-65 Enterprise. The best, the mightiest most awe-inspiring ship in the fleet. She was one of 12 in the Constitution Class. All of her sisters were christened after famous warships. She was designed to be the same approximate length as the Big E or an Iowa Class Battleship, about 300 meters.

These were about as enormous as the human mind could conceive at the time and before Star Wars came along with ships miles long. She was eventually upscaled to 450 meters by the great Doug Drexler to better fit in the modern era of mega-sized spaceships during the prequel Enterprise series.

Unlike douchebag, modern Star Trek production artists like John Eaves and Ryan Church who only design things to look “cool”, Matt Jeffries designed every nook and cranny of the Enterprise to actually function as a futuristic space naval vessel. Maybe because he was an aeronautic engineer. Doug Drexler is cut from the same cloth as Jeffries and is one of the very few contemporary production designers that should be commended.

Much of his vision has come to fruition to one degree or another.

The iconic Enterprise bridge design has been adopted by modern navies and many others as command and control centers. And though the plywood sets have aged the design holds true. The original Enterprise is a perfect design and the grandfather of all Sci-fi production design.

Of course, John Eaves and CBS decided to change and mutilate it for Star Trek Discovery.

In the world of Star Trek warp speed is infinitely faster than light speed. Though there are presumably 12 sister Constitution Class Starships like Enterprise, she is the fastest ship in the fleet. Having Scotty on board assures that. Reaching the center of the galaxy in the blink of an eye is a feat that only the Enterprise has been able to do.

The Enterprise boasts the known galaxy’s most powerful array of weapons. It’s phasers and photon torpedoes are said to easily be able to devastate the surface of a planet. Phasers are like Star Wars turbo lasers only infinitely more powerful.

They are the main offensive and defensive weapon in Starfleet.

They can be tuned to pinpoint a man-sized object on the surface of a planet or wide beam rip thru other starships and planetary bodies. Photon torpedoes are devastating punch through projectile weapons. They are primarily used to break through enemy shields or thickly armored defenses. Their yield can be controlled and potentially greater than tens of thousands of thermonuclear warheads.

The Enterprise is composed of Duranium. The most resilient alloy in the galaxy. Unshielded she can sustain point blank attacks and still function. She has survived point blank nuclear missile bursts with little damage.

She has a seriously tough hull but her primary defense is her energy shields. An almost impenetrable energy bubble that protects the ship. Her shields have soaked up freefall into an atmosphere as well as entering the corona of a sun. As we have seen her shields can be penetrated but it takes a great deal of damage to do so.

Her final defensive capability is the ability to separate the saucer of the ship from the engineering hull. Thus giving her the ability to continue when one section or another becomes uninhabitable.

Enterprise boasts some of the most impressive scientific research labs in Starfleet. It’s been said that her scientific labs and long-range sensors are greater than dedicated science ships.

Enterprise also boasts a full complement of biologists, chemists, geologists, astrophysicists, archaeologists, paleontologists and physicians to rival any university. Enterprise with Kirk, Spock and McCoy are responsible for exploring and charting more new quadrants of space and new alien contacts than any ship in history.

Star Trek TOS, in particular, is said to have been responsible for an entire generation of aspiring inventors, scientists and explorers. Two guys named Jobs and Gates to name a couple.

Enterprise was designed for a self-contained 5-year mission. She has capabilities to make minor repairs without Starbase. She had a crew of 425. Unlike Star Wars ships that run on fuel and must constantly be refueled, Starships use Dilithium crystals which do not degrade unless overtaxed or damaged in some way.

She also boasts numerous replicators which are capable of recycling food, air and water as well as physical objects like clothing, weapons, ship components, etc. Replicators act like transporters breaking down material, both organic and inorganic, at the molecular level and reassembling them into new materials.