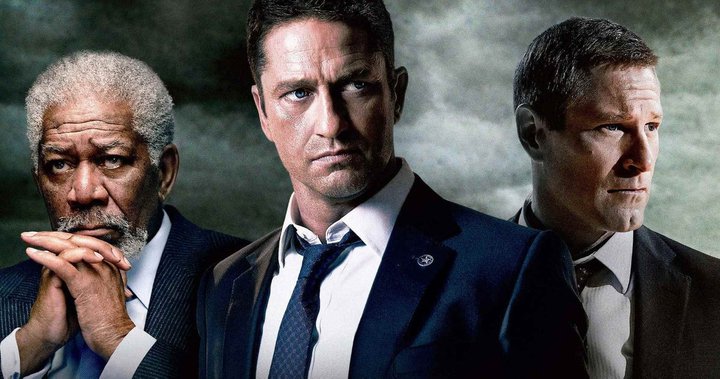 We have been known to spend hours writing huge articles on phantom Jaws sequels that never happened.  Often we write thoughtful, reflective pieces on the state of the Star Wars franchise.  Yet sometimes, just sometimes, we want to watch a gravel-voiced beast of a man punching the fuck out of bad guys while shit blows up around him.

Way more enjoyable than they had any right to be, both 2013’s Olympus Has Fallen and 2016’s London Has Fallen present the kind of big scope but mid-budget, silly yet high concept action movie that seemed to have gone out of style in a blizzard of superhero soap operas and connected universes.

Now, Gerard Butler’s secret service agent Mike Banning is back once again in Angel Has Fallen from Millennium Films.

According to the studio notes in the new film, an assassination attempt is made on U.S. President Allan Trumbull (Morgan Freeman). His trusted protector Banning (Gerard Butler) is wrongfully accused and taken into custody.

After escaping from capture, he becomes a man on the run and must evade his own agency and outsmart the FBI in order to find the real threat to the President. Desperate to uncover the truth, Banning turns to unlikely allies to help clear his name, keep his family from harm and save the country from imminent danger.

Ric Roman Waugh (Shot Caller) will direct from a script by Creighton Rothenberger and Katrin Benedikt.

The movie opens on August 23rd.