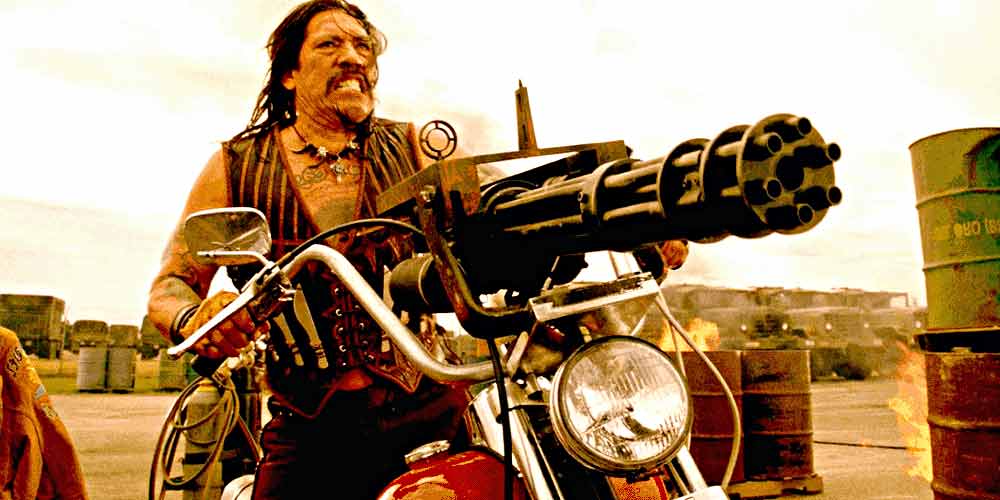 I’ve loved movie props since I was a kid.

And before any of you balk, I still have both eyes and turned out just fine, thanks.

Since toy manufacturers in those days either didn’t make them yet or they were too pricey, we made our own. Usually out of wood and a bit of imagination. And I still make props today for special occasions. Like Halloween.

The list of movie weapons is exhaustive, so here are a few of the best and some of my personal favorites.

The Joker. In the street. With the revolver. Except this one boasted a custom 21″ barrel and knocked the Batwing out of the sky.

If you didn’t laugh out loud the first time you saw him pull it out of his pants, then we can’t be friends anymore.

Built from a Beretta 93R, it fired in 3 round bursts and sported a fictitious 50-round magazine. Oversized because the director felt a Desert Eagle looked too small in Robocop’s hand. 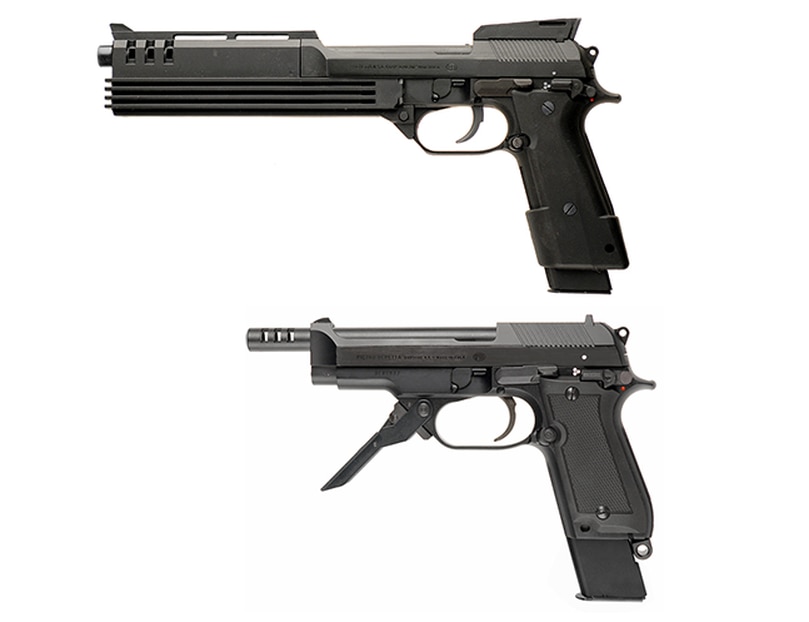 Also classified as a “machine gun” according to law, so production had extra hoops to jump through just to have it in the U.S.

Experimental anti-materiel rifle intended for use against armored targets, also seen in Robocop. Equipped with electronic sight (not seen due to movie budget) and fires explosive rounds.

Simply a dressed-up older version of the Barrett M82, designed for firing a .50 BMG round at long range.

Hokey Sequels Are No Match For Ancient Weapons

Fully functional, these props from the original trilogy were loaded with blanks to provide not only practical effects but give the actors something to react to and help the rotoscoping artists with timing reference when animating the bolts.

Discerning eyes can spot cases being ejected during the bridge scene in A New Hope, and when Lando fires in The Empire Strikes Back.

A non-firing MGC replica was used for the Greedo scene shot in Hollywood, while the firing versions were held in England by Bapty & Co. The functional one was a Mauser C96, and used by Frank Sinatra in The Naked Runner.

Nicknamed the “broomhandle” for its grip, it sported a box magazine and optional wooden shoulder stock for short rifle accuracy.

The 7.63x25mm cartridge it used was the highest-velocity pistol cartridge until the .357 Magnum was born in 1935.

The Only Way To Be Sure

Specifically used by Privates Vasquez and Drake in Aliens.

If you happened to play Alien Vs. Predator on PC, this weapon was your friend.

Built from a modified MG42 machine gun, it fired 500 10mm caseless high-explosive rounds at 1200 rpm. This robust platform was mounted on a servo-controlled harness, with barrel mounted tracking system and linked infrared headset guided by a targeting processor in the harness.

Literally point and shoot. Like aim assist you controller-using scum buckets use on some of my favorite PC shooters.

Innocence Is A Matter of Timing

Coded so only a Judge can fire them, it had a 25 round magazine with programmed mission-variable ammunition.

Both movie versions were futurist shells around standard handguns – the Beretta 92FS and Glock 17.

Ask Me About The Little Red Button

Developed by Jean-Baptiste Emanuel Zorg in The Fifth Element. This weapon did it all.

According to the armorer, Simon Atherton, the firing version was built around 5.45x39mm AKS-74U carbines.

During the demonstration scene, each individual function of the ZF-1 had separate respective props, weighing about 15 lbs. each.

Well Excuse Me All To Hell

The scene below is great not only because Tom Savini is hamming it up, but the guy with the switchblade is his protege and friend Greg Nicotero. Nicotero, Howard Berger (Walking Dead) and Robert Kurtzman (Doctor Sleep) decided to work for themselves and started KNB Efx Group in 1988.

Just A Slight Stiffness Coming On… In The Shoulder

Bet you thought Scaramanga’s Golden Gun would be my Bond pick. Too easy. For GoldenEye 007 on the Nintendo N64, it would have been.

But the one that caught my attention was wielded by Ola Rapace in Skyfall. While the Glock by itself is unremarkable, the 100-round Beta-C drum attached to it is not.

Blink and you’ll miss it.

Pity The Warrior Who Slays All His Foes

When was the last time you heard anything other than “Set phasers to stun?” Seriously, I’d really like to know.

The Klingons used one setting on their weapons. Because they got sh*t done.

Phasers remind me of:

That’s right. Nothing says intimidation by beaming in hot armed with trig functions.

“You’re mean! Why can’t you say something nice about the Federation?”

You Play A Good Game Boy

First seen wielded by Reggie Bannister in Phantasm II. Literally just two sawed-off double-barrel shotguns stuck together with a handgrip below and flashlight on top.

Because no one likes Jawas.

‘Till The Blood Runs Clear

Weapon-of-choice for the surly Luxan warrior – Ka D’Argo – in Farscape, the best science fiction show ever broadcast on television. PERIOD.

Three and a half feet long of heavy broadsword – balanced, tipped, and double-edged.

What? Not disco enough? Fortunately, it unfolds into pulse rifle… 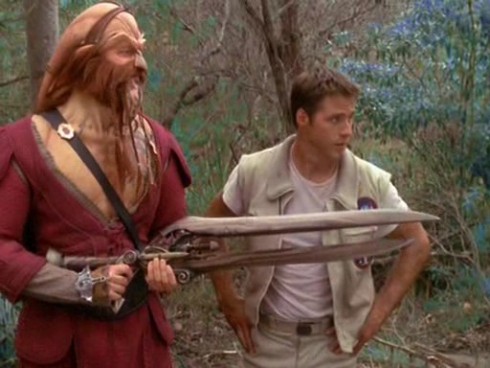 …for those days you just need to get away.