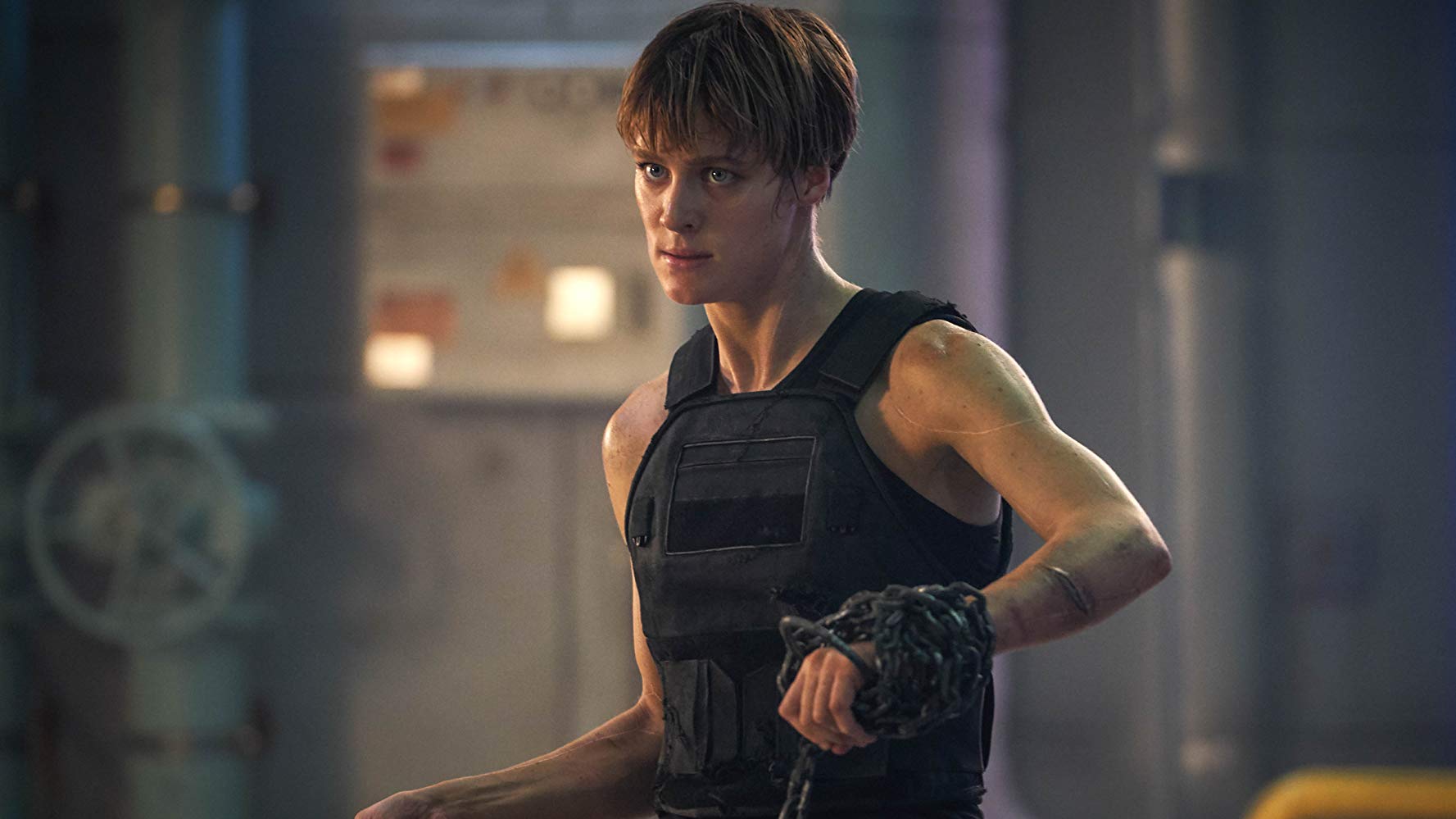 Director Tim Miller will be at SDCC next week and has some choice words for you about his latest film Terminator: Dark Fate.

Looks like Timmy got bent out of shape when the first images from the next chapter in this walking corpse franchise dropped. 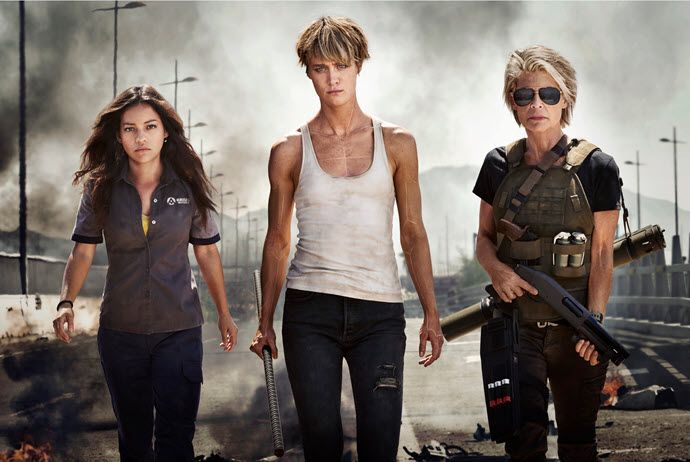 He was asked about the backlash the early Dark Fate poster received, specifically a few online comments calling Davis and her co-stars feminazis, and how he thought she will be received at Comic-Con.

“If you’re at all enlightened, she’ll play like gangbusters. If you’re a closet misogynist, she’ll scare the fuck out of you, because she’s tough and strong but very feminine. We did not trade certain gender traits for others; she’s just very strong, and that frightens some dudes. You can see online the responses to some of the early s–t that’s out there, trolls on the internet. I don’t give a fuck.”

Now, when this image first appeared, I initially thought that it was a Justin Beiber wannabe. When more pictures emerged, I figured that all of those weird scars were due to her being some sort of cyborg. It looks like that may not be the case at all.

“Before we brought in screenwriters, we did a room with novelists at my request because they’re world builders and we’re reinventing the franchise. One was Joe Abercrombie [the “First Law” series], who pointed out that the Terminator films tend to have a trinity of main characters. One of those is the protector, the Kyle Reese character.

Joe came out with this idea that a new protector from the future is a machine fighter. It’s a painful life, and they’re scarred and take a lot of drugs to combat the pain of what’s been done to them. They don’t live a long time. It’s a very sacrificial role; they risk death to save others. And from the very first suggestion it was always a woman. We had to look for someone who has the physicality, but I’m very sensitive to actors. I didn’t just want a woman who could physically fit the role but emotionally as well. Mackenzie really wanted to do it; she came after the role. She worked harder than anybody.”

So, a human that takes a lot of painkillers and fights killer machines with rebar. And this is to be a noodle-armed human female that goes toe-to-toe with said Terminator AI?

I listened to a podcast in May that had on guest Jocko Willink, a retired Navy SEAL officer and an MMA fighter. He discussed one on-one-fights and made some points about female fighters. He mentioned that a 110-pound woman that is a decent Brazilian jiu-jitsu fighter would have a real problem against an athletic 230-pound male.

Ultimately, in many cases, all of the jiu-jitsu in the world would not help her. He noted that a firearm is a great equalizer. 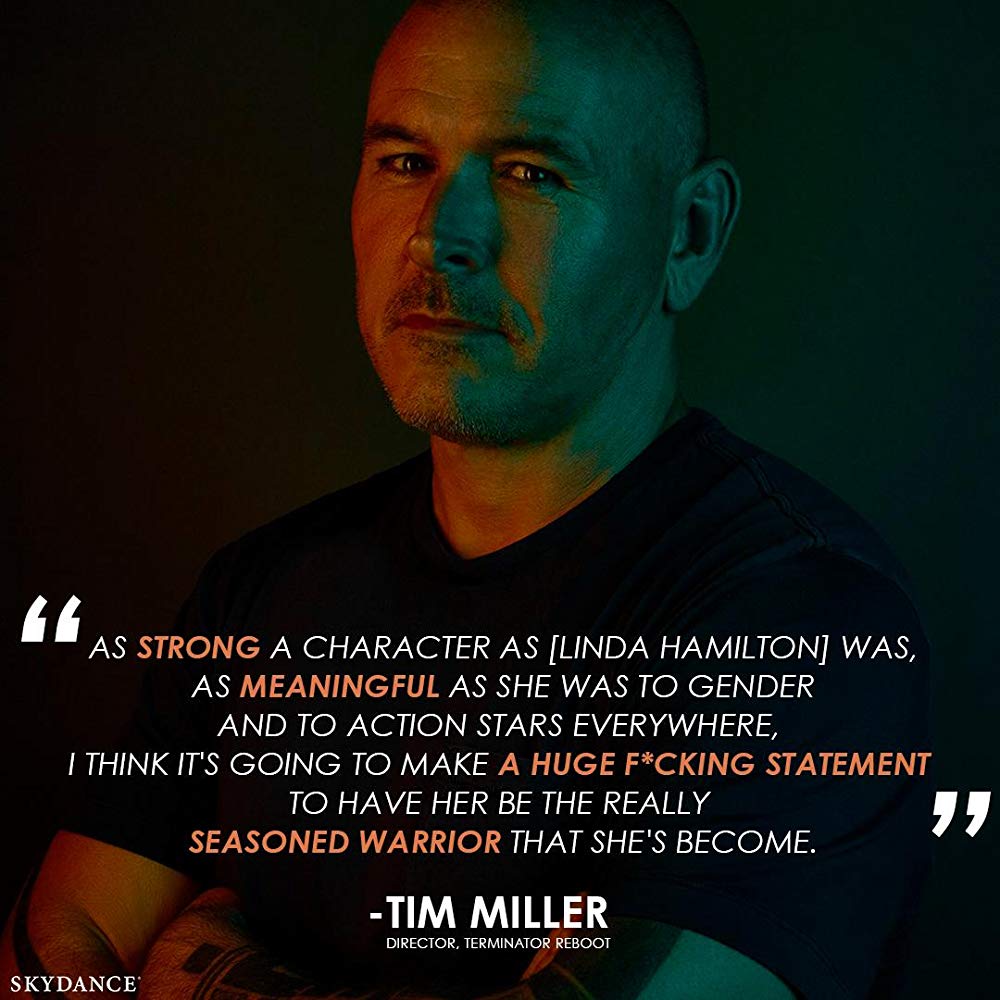 I get it, Linda is a bit too old to do what she did in T2, but I think this plan is borderline insane. And of course, any people who challenge this are called names.

This is the new normal, make things so over the top, and insult your audience if they call you out on it. I call it the Lucasfilm effect.

I may catch this flick on Amazon Prime eventually, but in no way would I go out to a theatre to see this. Time to scratch another franchise off my interest list.

One more note on this story. When this was first announced, it looked like Jim Cameron would be very hands-on with this project. This also is not the case.

When asked about Jim, Tim said:

“Jim has moved to New Zealand to focus on “Avatar.” I saw him a couple of times when I got back from shooting, and I showed him a director’s cut. Jim will come in and provide clarity in key moments about the goals of the franchise. He’s great about looking at things and saying, “This needs to be reinforced.” He’s like a diver into a pool. He dives to the bottom, jumps out and the pool settles. Dives in again. He occasionally cannonballs. But it’s incredible.”

This film will be Terminated at the box-office November 1.