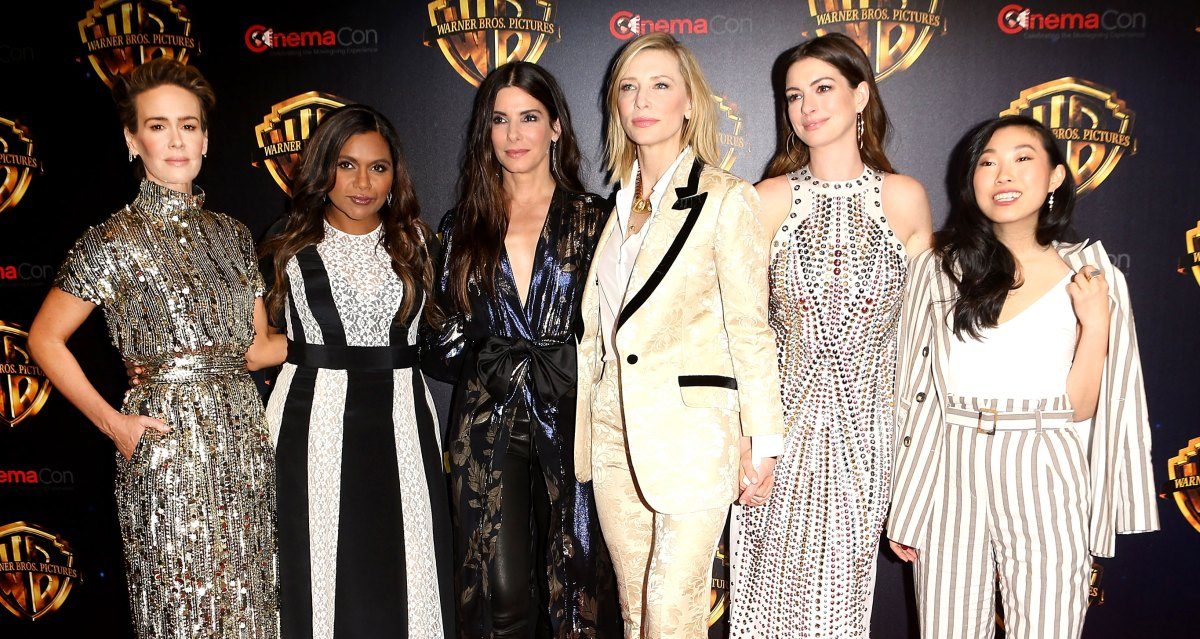 This looks bad. They are playing it like a Bridemaids without the street-shitting raunch.

None of the jokes in this trailer land anywhere close to their target — was director Gary Ross using a Norden bomb site here or is he that tone-deaf?

Let’s talk about Gary for a second… what is he thinking?

He’s the guy who made Pleasantville and Seabiscuit, so what is with directing what looks to be the most lazy, gender-swapping, plug-and-play nonsense since 2016’s Ghostbusters?

In order to get back in the Circle Of Trust after delivering a bomb, a formerly successful director has to do an Ocean’s 8: a movie where they have little to no creative input and are required to just follow orders.

Remember how far down Ron Howard was when Lucasfilm plucked him off the trash pile to steward the Solo: A Star Wars Story debacle?

At Least They Got Half The Cast Right

Look, Sandra Bullock, Anna Hathaway and Cate Blanchett are three of the most glamorous, elegant actresses to grace the silver screen in our time, maybe in any time.

While Bullock has cut back her workload of late, she’s still “America’s Sweetheart” and half of the movies she’s starred in over the past decade have been bonafide hits.

Hathaway needs zero introduction to American or international audiences after being the female lead in Interstellar, Les Miserables and The Dark Knight Rises. She’s also been in money-making movies that had no business making money like The Intern and Alice Through The Looking Glass.

Blanchett doesn’t have either Sandy’s or Ann’s box office track record as a female lead but she knows a thing or two about bringing credibility to fantasy movies in Thor: Ragnarok, Cinderella and The Hobbit trilogy.

These are genuine movie stars with high Q-Rating that can get asses in seats.

Helen Bonham Carter has been in a lot of strange roles and she would hardly qualify as either a movies star or be considered classy, but she is a fine actress. And Sarah Paulson is a serious comer with a lot of movies opening in the next couple years. So, that’s a pretty stellar lineup.

If they were going to get three more elegant, classy actresses I might have even shown up for this thing — but that is not what they did.

The suits think it’s about the familiar, about relatability: they believe they need these “edgy” ladies to get those wine moms in the seats because this is what the suits think the average woman in the US is laughing at, watching and listening to.

If Ocean’s 8 was a straight comedy I might tend to agree but, like the original and the rebooted franchise, it’s a heist-comedy. With the emphasis on heist. Which means you want smooth, slick, larger-than-life characters that the audience can lookup to; certainly not the frumpy or the familiar.

But It’s All About “Girls’ Night Out”!

It’s still possible that it could score big at the box office. A quick glance around Google find a bunch of Ocean’s 8 viewing and premiere parties targeting the female demo.

And, like they did with 2016’s Ghostbusters, the feminist media (FeMedia? FemoSphere?) is trying its damnedest to generate the illusion of a backlash.

This is another huge mistake.

Audiences don’t want controversy and an “Us vs Them” aura of negativity surrounding things that are supposed to be fun… like heist comedies. Warner Bros., unlike the dummies at Sony, have wisely kept their people quiet and prevented them from over-reacting to a few stupid comments on the internet.

There really is not a backlash.

If you look at the first trailer for Ocean’s 8 on YouTube it’s got a 2:1 Like-To-Dislike ratio, as opposed to Ghostbusters 2016 which is 1:4 against.

But another thing you notice is that Ocean’s 8 only has 150K reactions on 12M views. That’s not good. It’s really not jumping out and grabbing a lot of people.

Finally, let’s consider the competition at the box office next weekend.

Four of the top ten movies out now are female-focused, counter-programming. This weekend, date-bait like Adrift and Upgrade are dropping. And Ocean’s 8 comes out the same day as Hereditary, which is one of the best reviewed movies of all time.

Hereditary is a horror movie which also might qualify it as a date movie.

With all of these chances to see a female-focused movie that isn’t gender-swapping or see a movie with their significant other, I doubt women are going to show up for this story with this cast.

The only thing that might save this it is that it cost just $70M to produce.