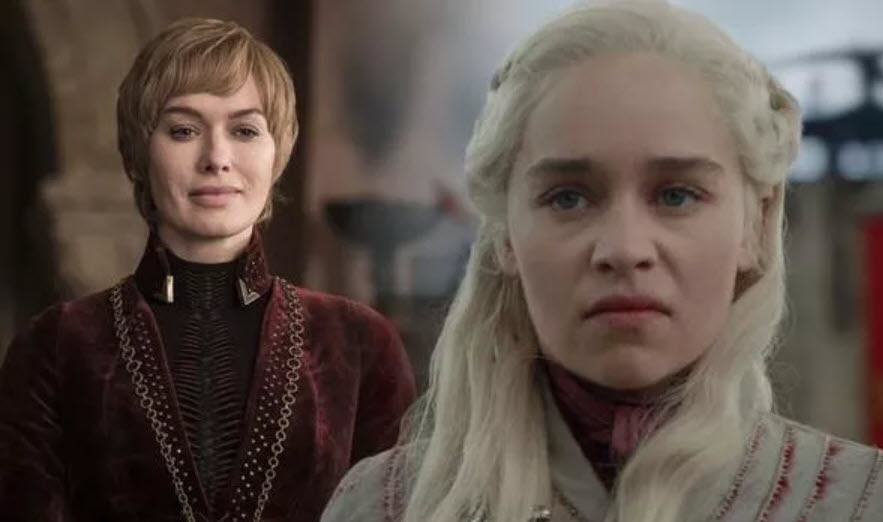 After 8 seasons and 72 episodes, next week we will finally be getting to the end of the biggest show in the world. Originally I was not too crazy with the “Battle of Winterfell” not being the end of the series. It seemed too big an event to take place in the middle of the season and not use it to resolve everything.

But then I started thinking and realized that Breaking Bad kind of did the same thing. On that show everything finally went down in the episode “Ozymandias”, but then they still had 2 more episodes after that that were very slow and were used to tie up loose ends. So they are really not doing anything else here that other great shows have not before in the past?

This season does feel like it’s too short and that they could have used a few more episodes to flesh stuff out better. Even George R.R. Martin felt they ended the show too soon. But what do I know? 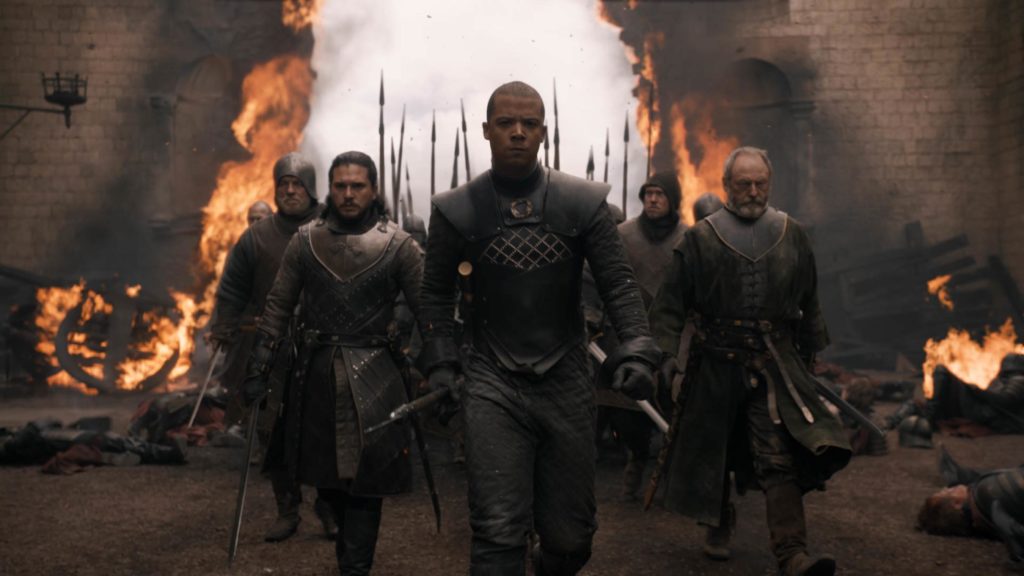 I really liked this episode. After last week’s clunker, it was nice to see the show regain its footing. Not perfect, but there was a lot to like about this week’s show.

It seems like this episode’s theme was that you can’t escape who you really are. At the end of the day, Dany is still a Targarian, Jon Snow is still a Stark, Arya is still Ned Stark’s little girl and Jamie still just wants Cersei.

The actual battle for King’s Landing was kind of short with Cersei’s army surrendering quite quickly, but the carnage lasted for a long time after. At first, I was kind of surprised that the episode was not one big battle, but then when I saw what they were doing and that it was not really a battle episode, but rather more of a disaster movie, I really liked it and thought it was a good move for the creative staff.

After Winterfell, I don’t know if we really needed to see another huge battle.

Going in a different direction and just watching the dragon destroy the city was an interesting way to change things up and for the show to have its own version of 9/11. 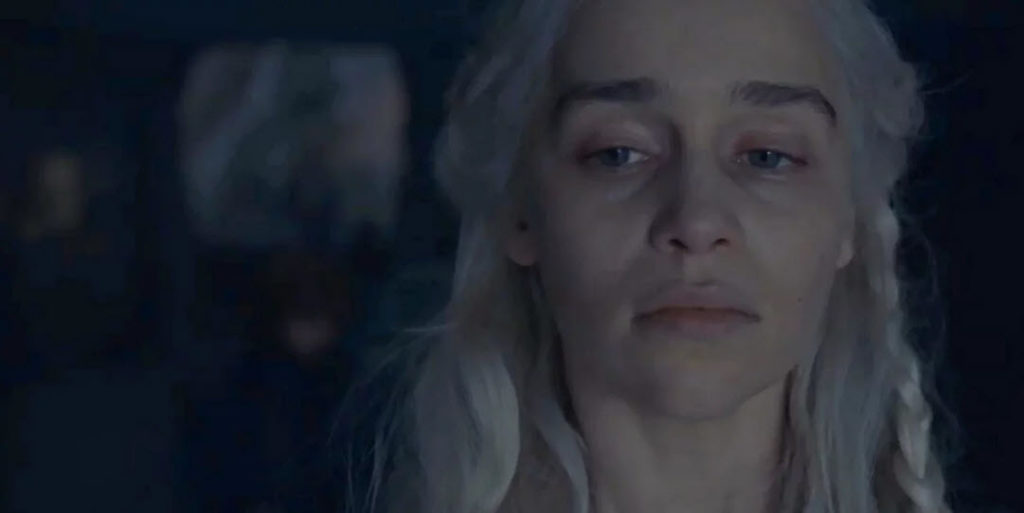 So she turned into the Mad Queen, burning down all of King’s Landing. It was a nice touch seeing the green wildfire blowing up as well during the episode as a nod to her turning into her father and completing his plan.

She was all over the beginning of the episode, but then once she turned and decided to destroy everything, they didn’t really show much of her anymore, just the dragon.

Did she even have any lines in the last hour of the show? 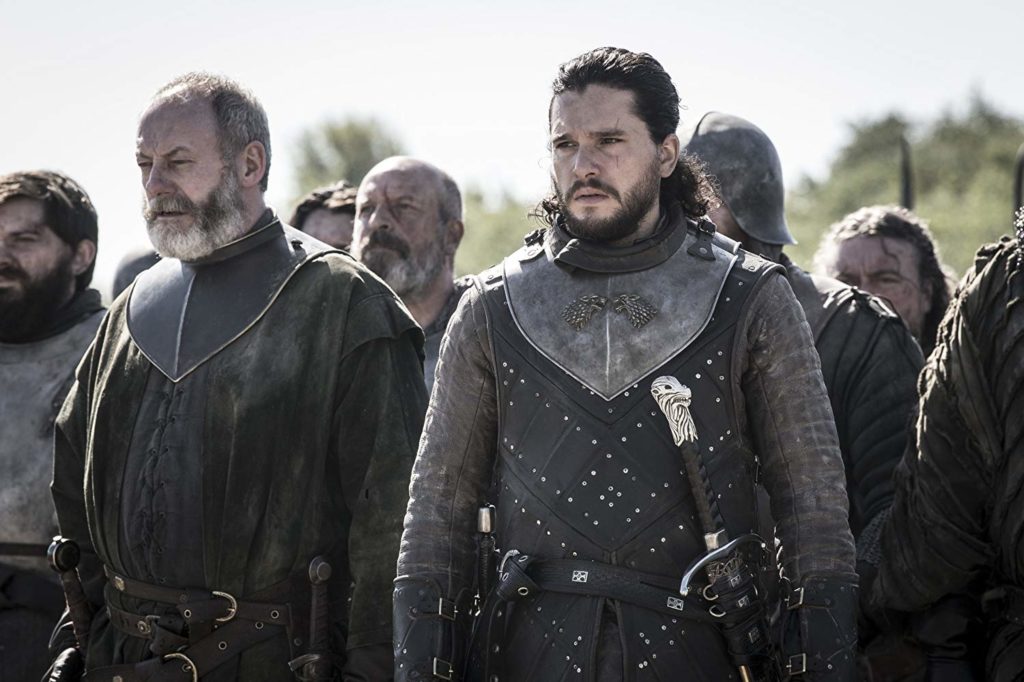 Johnny did not have much to do during this episode, but it was an important one for him.

He witnessed first hand his love’s cruelty and despite not wanting to sit on the throne, seems to now see that Dany is not fit to rule and that he is going to have to step in and claim his rightful place as king.

Based on what they have been doing so far with Jon Snow and his lineage, I really thought they were going to screw up that whole part of his storyline and that he was just going to throw it all away so that Daenerys could be queen and make it a whole “what’s the point” kind of thing. But I like what they are doing and how they are giving Jon Snow a real call to action rather than him taking the throne because of who he is and because that’s just the way things were done back then. 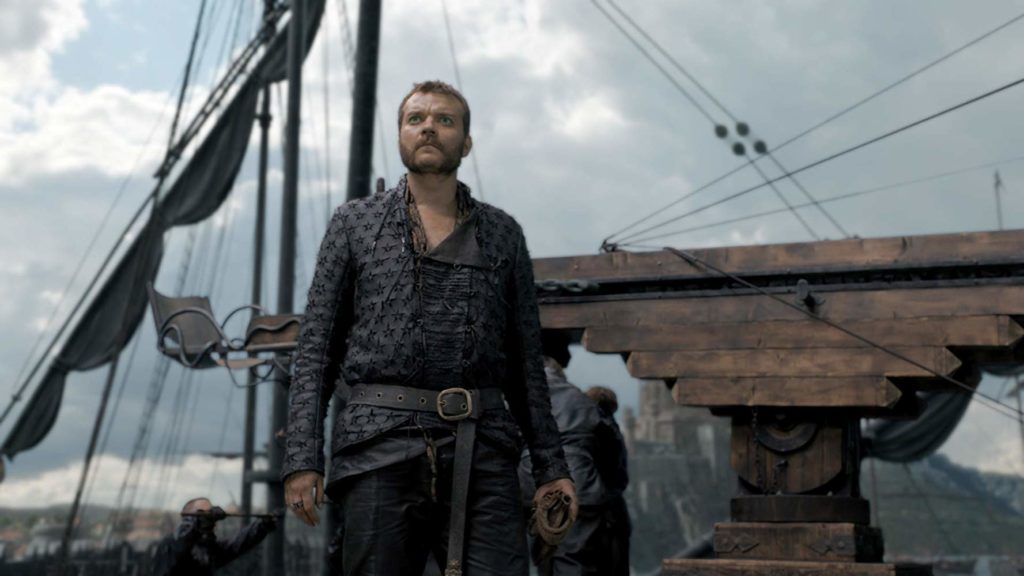 Greyjoy was killed by Jamie. Thank God. I hated him.

But he’s the villain, so I guess he got the reaction out of me that they wanted.

Someone this morning said to me he looks like every European man that comes to NY thinking they’re hot. I think I agree. 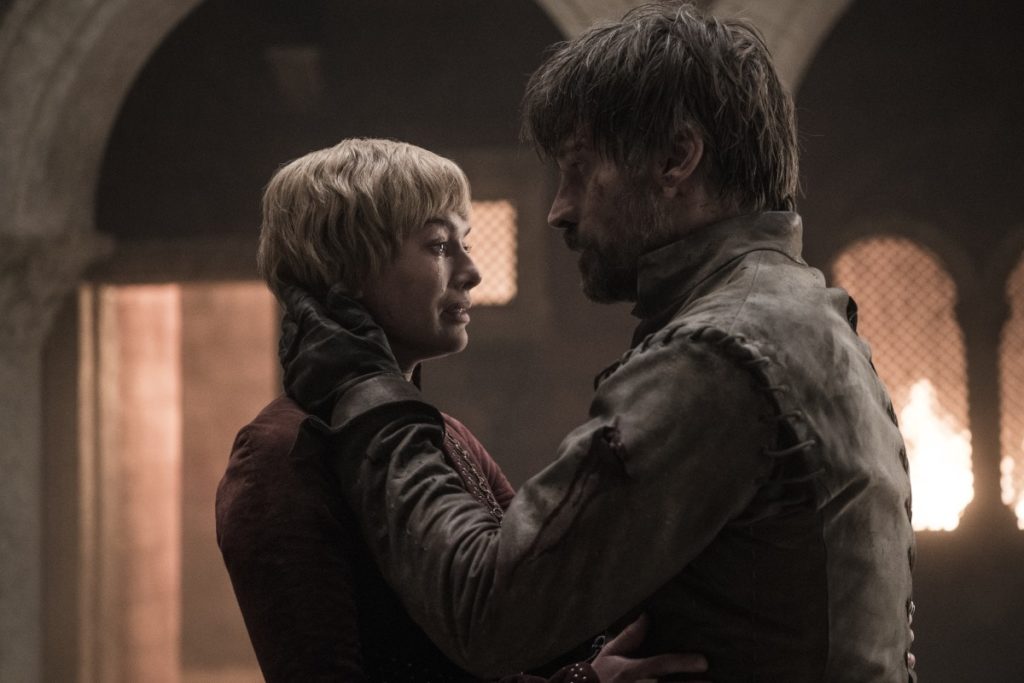 Jamie came back to Cersei despite hooking up with Brienne of Tarth.

I really thought he was going to kill her off finally. They kept on teasing it and he had his hands on her neck and you’re just waiting for her to turn so he could snap it, but he doesn’t.

I don’t understand the point of his character’s arc. He started off as a complete asshole, then he slowly turned to one of the favorite characters, then again at the last minute they have him crawling back to Cersei? Don’t buy it. And it was set up nicely for him to do it too.

Cersei though, what was the point of her this entire season?

She has probably had less than 30 minutes of screen time the entire season and she’s the main (human) villain of the show. All she did was just look out the window in every episode. She went from being a very active character, to completely inactive.

Wasn’t the prophecy that she was going to be killed by her brother or the person she loves or something like that? Guess they just dropped it. 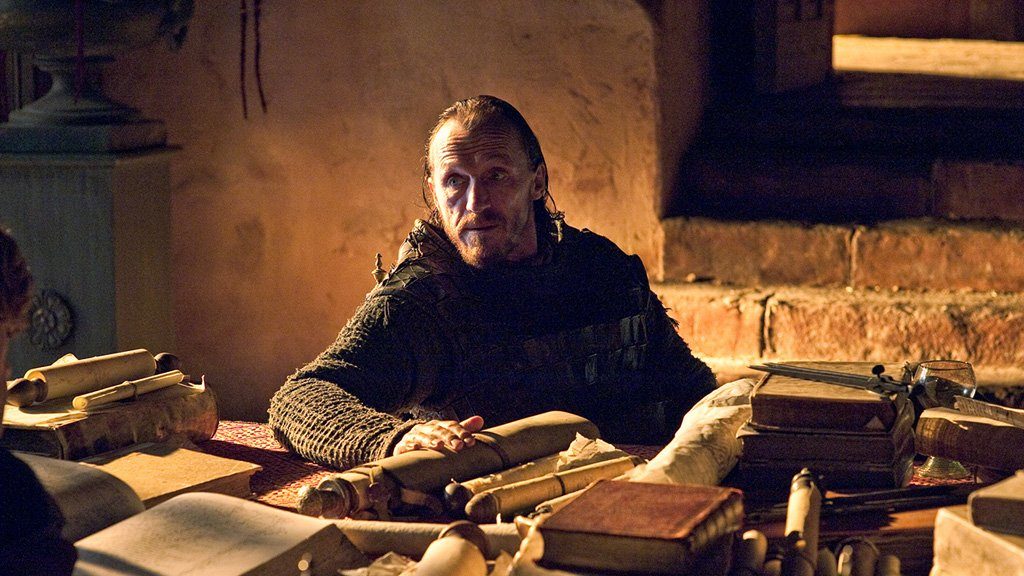 Cersei hired him to kill her brothers, but she died before he did it, so now that she’s gone what’s his motivation for wanting to kill Tyrion? Why would Tyrion pay him to not kill him if the person who put the bounty on him can’t pay the bounty hunter?

His use this season makes no sense.

He was in two scenes this season and you could have cut both of them and it would not have made a difference in the story, nor would anyone of even noticed it was missing. 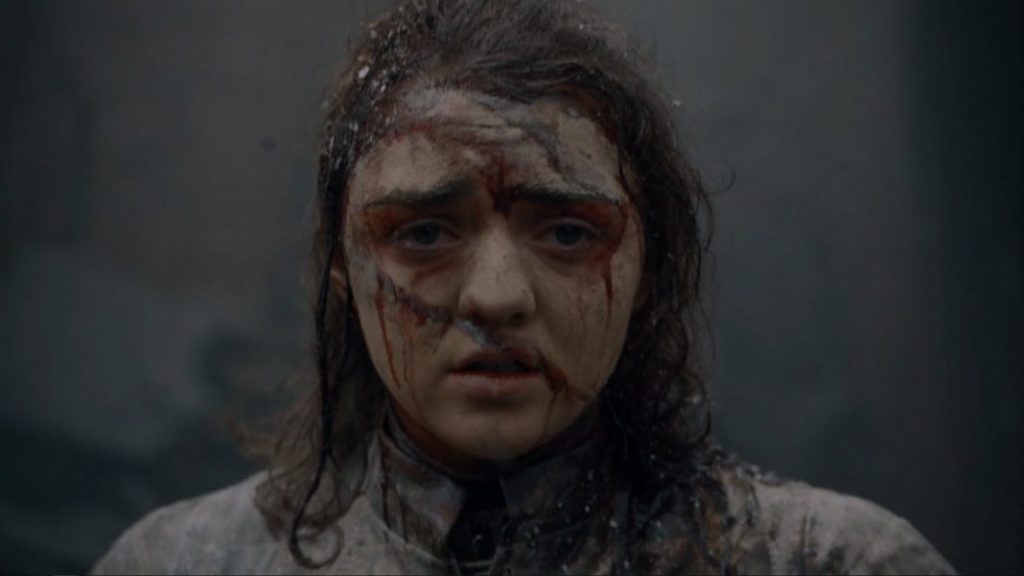 Arya is making her way to kill Cersei with the Hound, but the Hound turns her away and tells her to stop so that she doesn’t become the same person he has become. And she agrees and lets him go to finish it all off. Just like that!

At first, I was kind of annoyed by her turning back because they spent 8 seasons making her this badass assassin who killed the Night King.

Then after a simple warning, she just drops it all. Why make her into this strong character if she’s just going to drop it seemingly out of nowhere at the end?

But then after she turned back and started to see all the destruction that was going on, I didn’t have a problem because it was showing her what choosing the warrior life was like and that maybe it was not worth it after all.

If they have her go back to Gendry and take him up on his proposal, then that’s going too far back on the character, but if they leave her how she is now at the end of this episode, then I’d be cool with that. 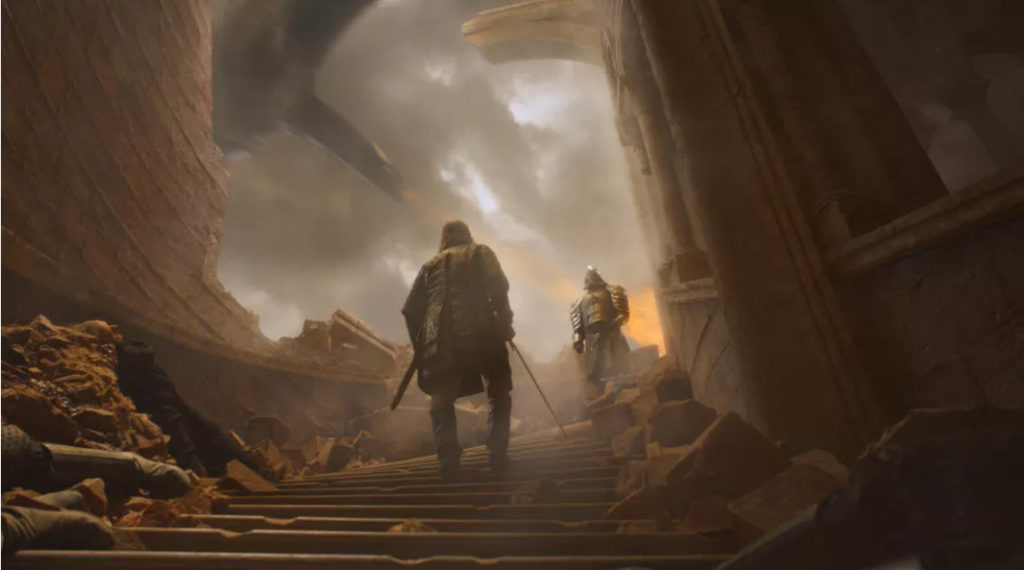 Cleganebowl finally happened. It did not go how I imagined it would, but it was pretty satisfying. I would say that the fight between the brothers was probably the producers just going and finally giving fans what they wanted.

It started off nicely, with a great shot of them staring each other down as the dragon destroys the city. Then it was just carnage.

It was a nice fight and I would say that end was pretty satisfying, but every time I saw The Mountain helmetless I thought was that it was The Hound versus Darth Vader.

Also, all the stuff with King’s Landing always seemed the most grounded in reality on the entire show and zombie Mountain never really seemed to fit in on the show to me.

But all in all, it was a pretty good episode. Not sure how they plan on summing it all up next week, but we’ll see.