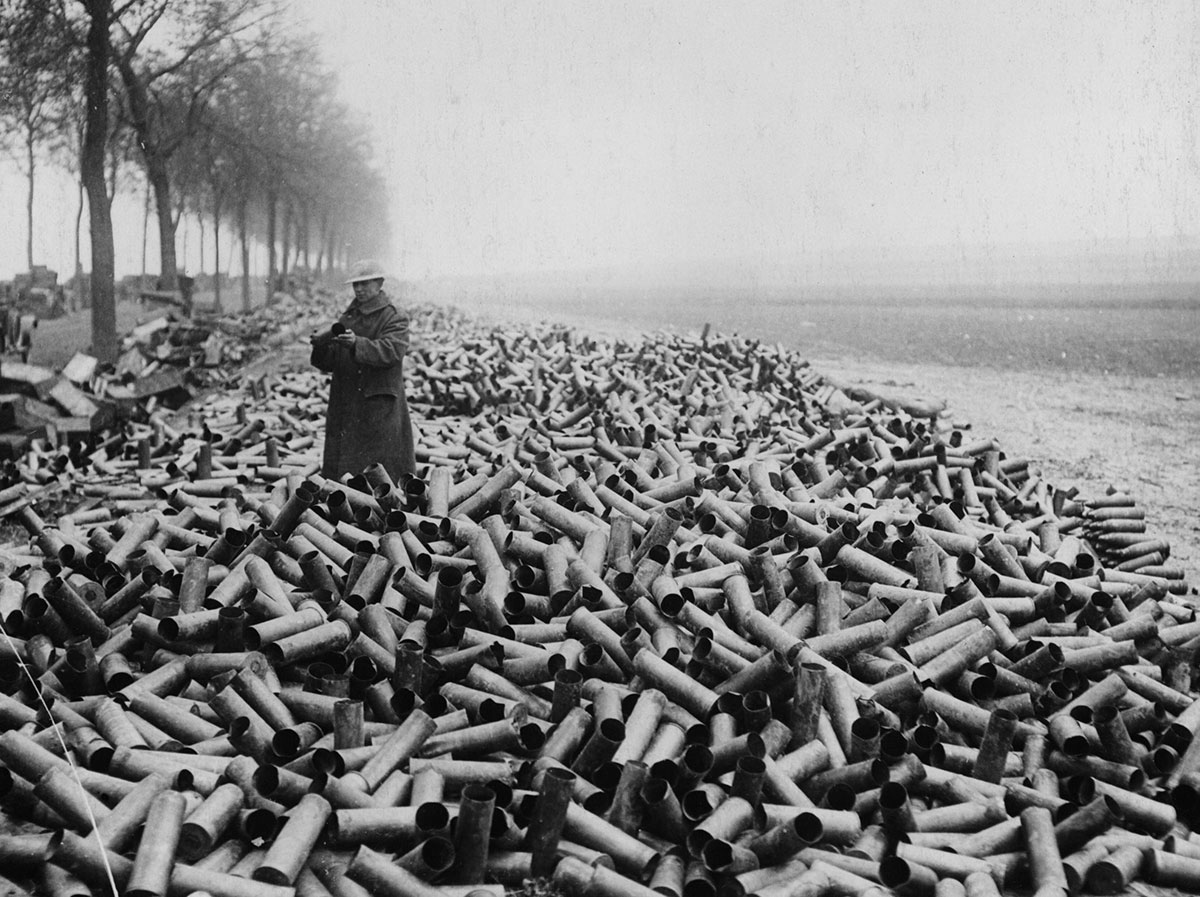 At the end of Peter Jackson’s seminal World War I documentary, They Shall Not Grow Old, there is a 30-minute “Making Of” featurette that will give you new found respect for what can only be described as Jackson’s single-minded obsession with perfection.

He’s an absolute madman. The attention to detail, the encyclopedic knowledge, the technical know-how, the problem solving, all remind us what is great about passionate directors and what they can produce given the chance.

That half-hour is worth your time and money alone.

Yes, yes… I know all about the problems with The Hobbit, where he was saddled with bringing another director’s vision to the screen and essentially forced by Warner Bros. execs to extend a 200-page novel into a trilogy on a truncated timeline.

And King Kong, well, I have no excuses there, the movie is simply wrong on many levels.

But They Shall Not Grow Old is a return to the Peter Jackson who made Lord Of The Rings. He’s not burdened here with creating vapor-cinema or fleshing out archetypes into fully-realized characters. In this case, he’s had all the materials in hand, he just needed to put the right pieces in the right order with the right presentation.

He has succeeded masterfully because he had the time to obsess over minute details that most audiences only sub-consciously recognize as being necessary to build an authentic mise en scène.

More on that later.

What About The Movie?

As most of you know, Jackson’s team has condensed 100 hours of hand-cranked, century-old footage into a 90-minute movie, each frame of which was painstaking restored and colorized.

Additionally, they mixed in archival audio recordings from World War I British combat veterans that lends a real feeling of intimacy to the whole affair.

Those feats alone would have been extraordinary but Jackson managed to pull all of these disparate elements together into an engaging, compelling narrative.

Some critics have described They Shall Not Grow Old as an emotional film — it’s not.

While the movie is very visceral, I don’t think I’ve ever heard war described in such a dispassionate manner.

The soldiers, all of them British, talk about going to war and fighting in the trenches as just “doing a job” which required them to “fight Jerry”.

Even the men who speak of their experiences as horrifying, which many of them do, are quick to tell the interviewer that they don’t regret it as it was some type of high adventure, a “great game”.

We don’t get a lot of the “I saw my buddy die” or “war is hell” or even any talk of shell-shock, what we now so generically sterilize as Post Traumatic Stress Disorder.

Of course, any notions of the glories of war are immediately wiped from the minds of the lads their first time over the top; some of these units lost 500 out of 600 men — in one battle, in one charge.

But no one is complaining about it.

The only time when any of the soldiers’ voices even crack is when one of them describes coming upon a mortally-wounded comrade during a raid: “I shot him — I had to.”

As I said, “visceral”. You are there with the men, not just in the trenches, but through the entire process of going to war, in unprecedented detail.

The Call To Arms & Recruitment

We begin with idyllic Victorian England. Trolley cars and rugby games. None of the men really had any clue about the politics and entangling alliances that was pulling the Continent into war, but when the declaration is announced, they rush to sign up.

Even though the minimum age to enlist is 19, kids as young as 14 are told by the recruiter to “go outside, have a few birthdays and come back in.”

Life At The Front

The scenery of this hellish setting has been burned into the Western mind: miles of ten foot deep trenches, barbed wire, the rain of artillery shells, bodies in No Mans’ Land.

But did you know about the hoards of bloated rats that swarmed over the men, living and dead alike? The difference between the sound of a mortar and a cannon shell? How to make tea with a machine gun? A mud so grasping and hungry that if one fell off the narrow plank-board walkway they were simply entombed forever in a marshy grave?

Kind of reminds me of something…

A Little Time Off From The Fight

After four days in the trenches, troops were rotated to the rear for some R & R.

And the girls. I’m pretty sure all of France was basically one big brothel. With all of the ensuing complications.

An estimated 20 to 30 percent of men contracted syphilis during the war, including both soldiers and the civilian population.

“You can die at any moment, from one second to the next. When there is the opportunity to respond to desire, there are no restraints,” explains Lieutenant Colonel Christian Benoit, in his book The Soldier and the Whore.

The Weapons Of A Terrible New Science

“We saw a creeping green mist.”

That would be the chlorine gas, a heavier than air compound that combines with water in the lungs to create hydrochloric acid.

Then came the colorless phosgene, which reacts with the lung alveoli and causes suffocation, even up to 48 hours later.

Finally, the chemists deployed mustard gas, which simply needed to touch naked flesh to cause painful blisters, requiring complicated care that took hundreds of thousands of men out of the fight.

God forbid a soldier was caught without his gas mask, he may have had to cover his face with a urine-soaked rag or like one unlucky bloke, dunk his head repeatedly into the latrine until the cloud of gas lifted.

“You could sympathize with how a rabbit might feel because we were hunted by mankind.”

Follow the men as they advance toward the German line 100 yards at a time behind a steel curtain of artillery fire.

Crawl, cross and cut through hundreds of yards of barb wire under withering fire.

Crouch against the lip of shell crater, waiting for the Hun’s machine gun to run dry so you can make a bayonet charge.

Unload your rifle down Jerry’s trench, dropping as many enemy soldiers as you can in a Mad Minute.

Capture the starving and exhausted Bavarian troops and employ them as stretcher bearers.

Wipe out the Prussians as they do not surrender.

This was maybe the most poignant part of the film. The boys came home to prejudice and silence.

Nothing was done to re-train or re-socializing the men whose entire skill set and experience was forged in, and made for, killing other men. Help wanted advertisements routinely included admonitions that “Veterans Need Not Apply”.

Civilians were just as icy, “People never talked about the war. It was a thing that had no conversational value at all.”

The boys who had saved an entire continent, maybe the entire world, were essentially pariahs in their own country.

It’s no wonder that socialism so easily took hold in Britain.

Contrast this treatment with how we handled things in The States and you realize the advantages a classless society has over an anachronistic aristocracy.

“Ok, Hope To See You Later”

Prior to the movie beginning, the audience is greeted by Peter Jackson at his crumbled, crumb-sprinkled best, politely requesting us to stay after the credits.

Listen to the man.

I don’t want to give away any of the surprise and wonder of the documentary within the documentary but this original BBC video, which is not part of the film, gives you a slight notion of what was involved with just the colorization process alone.

There is an infinite level of detail required for such complete authenticity: the exact sounds of the World War I cannons, the precise color of each uniform, the lip-reading, even the recreating of the final credits song, “Mademoiselle from Armentieres”.

I really hope you’ll take the time, go to the theater and watch the film.

THEY SHALL NOT GROW OLD

With proud thanksgiving, a mother for her children,
England mourns for her dead across the sea.
Flesh of her flesh they were, spirit of her spirit,
Fallen in the cause of the free.

Solemn the drums thrill; Death august and royal
Sings sorrow up into immortal spheres,
There is music in the midst of desolation
And a glory that shines upon our tears.

They went with songs to the battle, they were young,
Straight of limb, true of eye, steady and aglow.
They were staunch to the end against odds uncounted;
They fell with their faces to the foe.

They shall grow not old, as we that are left grow old:
Age shall not weary them, nor the years condemn.
At the going down of the sun and in the morning
We will remember them.

They mingle not with their laughing comrades again;
They sit no more at familiar tables of home;
They have no lot in our labour of the day-time;
They sleep beyond England’s foam.

But where our desires are and our hopes profound,
Felt as a well-spring that is hidden from sight,
To the innermost heart of their own land they are known
As the stars are known to the Night;