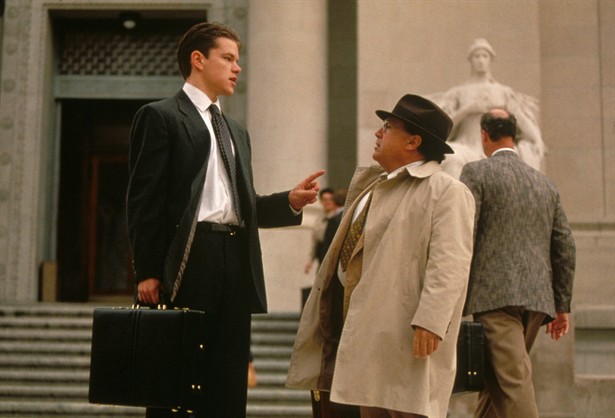 It’s a rare occasion when my wife and I can sit down and watch a movie that is of our choosing and not our kid’s selection.

I am always quick to choose a movie I’ve seen before and would like to revisit, especially to gauge her reaction to it, while my wife is often quick to choose the latest Netflix production.

That’s how I once ended up watching How It Ends on Netflix. Here’s a quick Queue In Review for that one: skip that piece of shit. 1/5 stars.

This time, for no particular reason, I picked John Grisham’s The Rainmaker. I am not a fan of John Grisham movies but I do like Danny DeVito a lot, so we watched it.

I loved it. This movie delivered so many heartwarming (for a movie fan) surprises that I was forced to overlook some of its sillier moments.

It’s directed by none other than Francis Ford Coppola! I had no idea he’d done this one.

I can’t honestly say that he has a recognizable style, but the movie looks absolutely beautiful and Coppola brilliantly uses camera movement and blocking to get the audience invested in his characters.

Matt Damon and Danny DeVito play characters that are very thinly drawn, so Coppola gets us to engage with them by using numerous shots were the camera trails the duo as they walk and talk.

I felt like I was part of their plotting and scheming sessions and by the time the drama kicked in, I cared about what happened to them.

I’m not a huge fan at all but he is supremely likable and genuine here. Aside from a silly subplot involving Clare Danes, his performance is perfect and I was rooting for him.

The mad genius who created the haunting score for To Kill a Mockingbird and the silly tension-building score for Airplane! is in fine form here. I do have one minor gripe: some moments of importance in the courtroom are backed by a slightly silly bit of scoring. It deflated the drama for me but I blame that on Coppola’s decisions and not Bernstein.

Both actors are always a welcome sight and when they popped up in the movie, I was even happier that I’d chosen to watch it.

Look for Glover squaring off against Jon Voight and watch as Scheider plays a wealthy scumbag while looking like Mr. Rogers.

The patented John Grisham melodrama was kept in check!

I am no fan of Grisham’s A Time To Kill, save for Samuel L. Jackson’s performance.

I dislike that movie very much because it treats the audience like idiots. I mostly blame Joel Schumacher for that. Here, Coppola’s experienced touch is clear and appreciated. He keeps the drama moving without resorting to cheap close-ups or obvious musical cues.

I recommend seeing this movie if you’re all caught up on Mindhunters, have seen Blade Runner 2049, and have a couple of hours to kill.