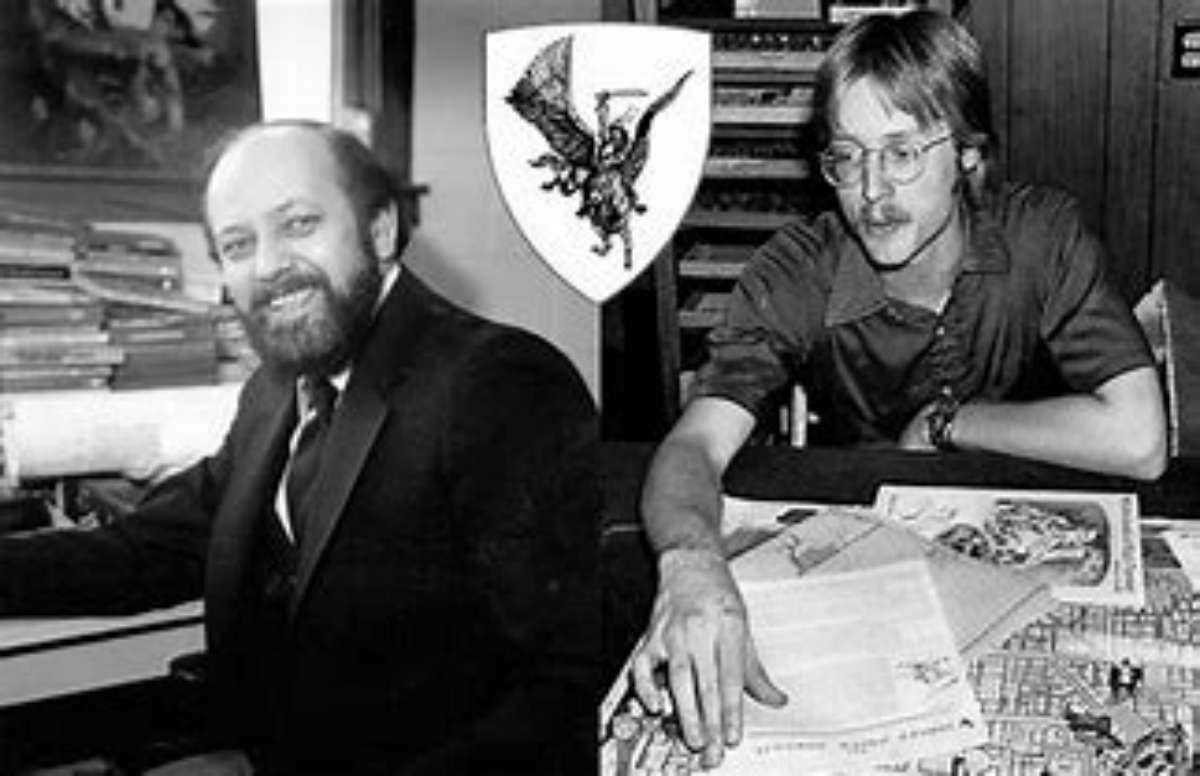 Hey there, D&D’ers and non-believers alike! Your personal gaming historian Captain Jerk here with another tale about the beginnings of the great game. Many hands went into making the tasty stews that would influence how gamers played the game we know and love. This is the story of the first.

The Smell of Wargamers is In the Air 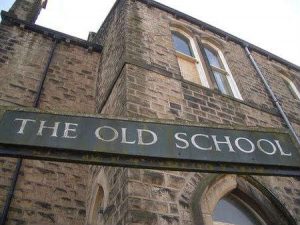 It was a beautiful August day in Lake Geneva, Wisconsin, and a throng of men old and young were lining up at a sign-in desk at the entrance to the historical Horticultural Hall to sit at a table indoors all day. It was 1976 at GenCon, originally a tabletop wargaming convention that had evolved to cater more to the players of a new game: DUNGEONS AND DRAGONS.

Inside at the many tables set out for the event sat middle-aged WW2 and Korean War vets clinging to their historical wargames.

Some scowled over at the nearby college-aged youths who in the last couple of years were invading the stodgy event, pretending to be elves and dwarves in the newish game Dungeons and Dragons.

Occasionally a paunchy, neckbearded wargamer would sidle over out of curiosity, and eventually ask a question non-D&D players would ask for decades. “How do you win?”  Each player had a different answer.

In one corner of the hall, not far from several seller’s tables, a blond, bespectacled 21 year old was hanging a fabric banner on the wall. The edges of the sign had been burnt and dirtied to give the impression of an old timey treasure map. On the banner were the words JUDGES GUILD.

The young man’s name was BILL OWEN, and he was there to represent he and friend BOB BLEDSAW’s new game company, Judges Guild. Bob was back at home sick and could not attend, and they had forgotten to arrange the use of a merchandise table, but that wasn’t going to stop Bill. He and partner Bob Bledsaw had a product to sell, and it was to be a game changer.

Based on Bledsaw’s home D&D campaign, it was a beautifully designed and intensely detailed map of a fantasy city they called CITY STATE OF THE INVINCIBLE OVERLORD. 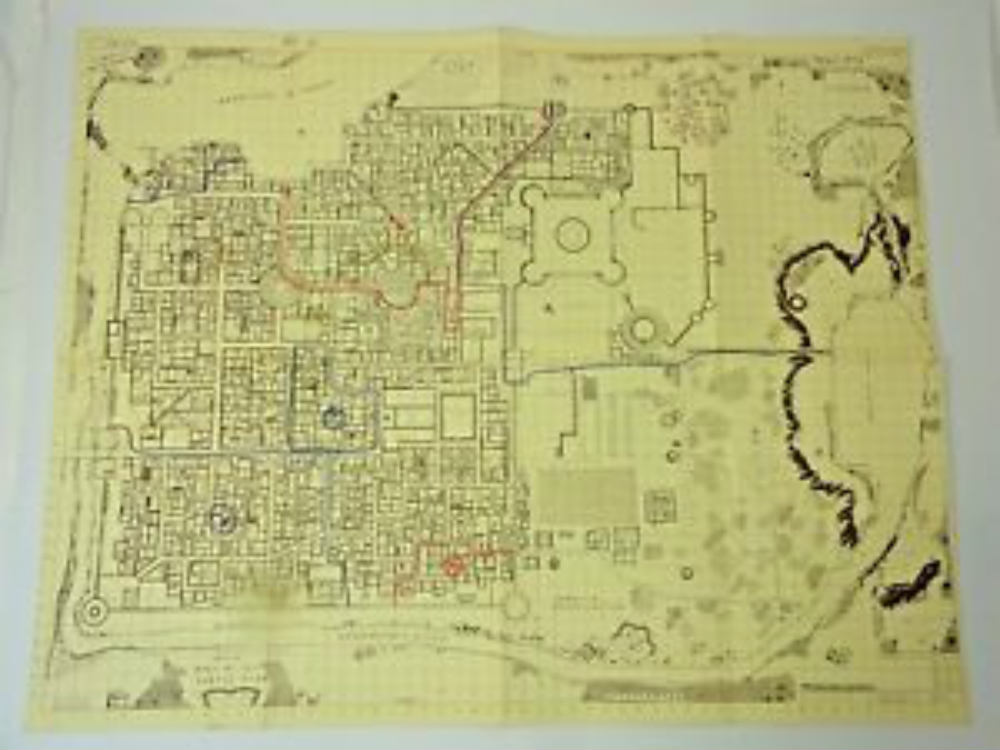 The map immediately evoked inspiration in even the most skeptical D&Der, with it’s dozens of buildings labelled as mundane businesses such as rope maker or bath house, to more fantastic shops such as wizards supply and monster hunter. It had an intricate system of alleyways and streets with names like Slaver Street and Misty Street. The maps were snapped up, but many buyers wondered about the details of the locations.

That had yet to be worked out; Bob and Bill had assumed Judges (what Dungeon Masters were called then) would want to add their own details. After all, Gary Gygax and TSR didn’t produce settings for the game yet, assuming there would be no demand. Bill thought for a second, then led any who inquired to his car, where he provided Bob’s address. “send us your address and 10 bucks, and we’ll put you on our subscription list for further info and releases.”

Bill had just invented Judges Guild’s subscription model. With few hobby shops specializing in role playing games yet, this turned out to be a winning move. The Judges Guild pirate ship had launched, matey.

Flash back a few months. 32 year-old Bob Bledsaw, who had fallen in love with D&D almost as soon as it came out, had been running a locally popular campaign for some time. He and young player Bill Owen had talked a lot about producing game materials, and Bob’s incredible map design skills made them decide to visit TSR Hobbies in hopes of convincing Gary Gygax to agree to let them produce game materials for D&D.

They were unable to gain audience with Lord Gary, but D&D co-creator Dave Arneson was happy to meet them. TSR didn’t think game setting products would sell, assuming everybody was happy doing their own homebrews. Dave went ahead and gave verbal permission, and Judges Guild was born (Gygax would much later say he would never have made the agreement).

The City State map proved wildly popular, and in order to fulfill the first subscription requests, Bob whipped out the details of the city he created. The vibe he instilled in it would be his gameworld standard. Bob’s personal home game setting was Tolkien’s Middle-Earth, but this new location could not be more different from the lands of Bilbo and Aragorn. It was totally gonzo.

The style was part ancient Greece, part Hyperboria, and part Lankhmar, the city of Fritz Leibers Fafhred and Grey Mouser. The city was designed as an outdoor dungeon, and walking the streets could lead to random monster and villain encounters. Walking into a shop and roughing up the haberdasher could be unwise; he might just be a 10th level sorcerer or even a demi-god.

Interesting to note, The City State’s Pegasus-riding Overlord was himself unabashedly evil, as well as 90% of his advisors and council. 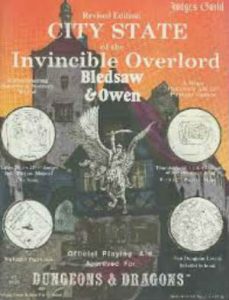 Years of campaign play could be enjoyed without the characters ever leaving the city. This was not a setting for wanna be novel writers. It was pure sandbox. Characters were supposed to wander the city and encounter non – player characters who would react to them.

There were charts and tables describing random encounters and events, and each shop location featured it’s own rumors being discussed by customers and shopkeeps. If players heard a rumor that a dolphin had appeared out of thin air at a bathhouse, characters could hightail it over to see what was going on. It was up to the dungeon master to wing it and adjudicate the situation.

Bob continued expanding his City State setting. Calling his lands THE WILDERLANDS OF HIGH FANTASY, many adventure modules and packets containing maps and info on other locales and city states in the setting were gobbled up by the new Judges Guild faithful. The tropes of The Wilderlands included having it’s city state communities exist in isolation in the middle of howling wildernesses, with little real power outside their city walls.

A Gritty Sandbox to Play In

The Wilderlands were lands in decline, full of ruins of older civilizations, with little in the way of usable trade roads or safe havens. Bandits, monsters, mutants, and even aliens could kill you as you journeyed. If you were a resident of a town in the lands, a ten mile hike to visit your cousin was a suicide mission. Much like The City State, populations of all sizes (at least the human dominant ones) tended to be evil in nature. In most fantasy settings there were pockets of evil. In the Wilderlands, it’s good that is hard to find.

The brutal Wilderlands made Westeros look like Tolkien’s Shire. 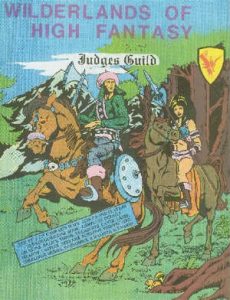 Another labor of love of Bob’s was Tegel Manor, a haunted super-mansion set in the Wilderlands, a dungeon chock full of ghosts, ghouls, vampires, and an endless variety of threats. With many gags, tricks and traps, it was a total funhouse dungeon. Playing in the mansion was like being on Disney’s Haunted Mansion ride, except you have to fight everything you see. It featured over 150 rooms, and a maze of hallways. It was both deadly and goofy as hell. At the main foyer you might be greeted by a butler in the form of a Balrog’s ghost, or you might enter a room to witness several zombies bowing before a large white rat wearing a plumed hat. In typical Bledsaw fashion, single sentence descriptions were the norm.

It was up to the haggard DM to decide why the hell zombies were bowing to a rat.

The manor halls were adorned with a hundred magical paintings of former residents with mystical affects.  There’s no evidence that Bob Bledsaw was a coke hound like Gary Gygax, but he sure came up with some wild-ass stuff. 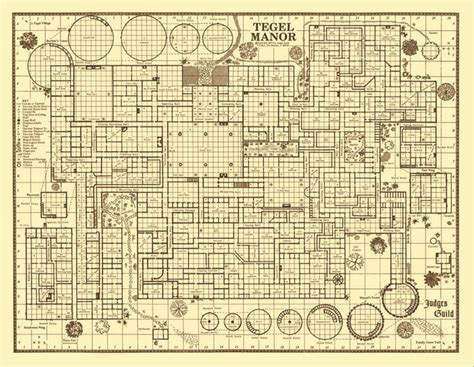 Fans of Judges Guild ate it up. It seemed the perfect weird fantasy world to D&D in.

Bill Owen would leave the company in 1978 for other pursuits (his true love before and after the Guild was the travel industry). But The company continued to expand, gaining the ownership of Dungeoneer Magazine, a fanzine-like product chock full of new monsters, magic items, and new adventures to add to the growing Wilderlands. 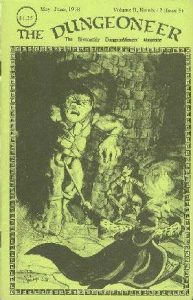 Judges Guild produced over 250 products related to D&D, and by the early 80’s employed over 40 people. Not bad considering many of these items were poorly edited, very often contained fairly generic and unappealing artwork, and almost always were printed on poor and flimsy paper stock. And this was one of the reasons The Guild was heading into a decline to rival the decaying civilization of The Wilderlands.

Gary Gygax and company over at TSR had wised up and realized there was a demand for settings and adventures. The items they began to produce were well edited and typeset, done up with high grade paper stock and hard covers, and professional artwork. Judges Guild rejected these notions.

Also the Guilds ideals of dungeon gauntlets, jokey puns and gags, and devotion to gonzo concepts were already becoming old. The D&D fanbase was changing and becoming more sophisticated. Ironically, players of a game where you pretended to be elves faced a growing realism movement.

Judges Guild lost it’s license from TSR in 1982, and this proved to be the nail in the coffin. After a few last gasps (The Guild had a few licenses with other companies), the gangplank to the pirate ship was pulled up in 1985.

But, A Legacy Among the Faithful

Many years later Bob would briefly team with others to reprint some old Guild items, keeping his name in the gaming loop. Bob passed away in 2008 (the same year as Gary Gygax), but to this day his legacy carries on, through his son Bob jr. teaming up with small press game companies.

Original printings of Guild items sell for high prices on Ebay and Amazon.

The pirate ship is long gone, but the gonzo lives on in the hearts of Judges Guild faithful, like yours truly.