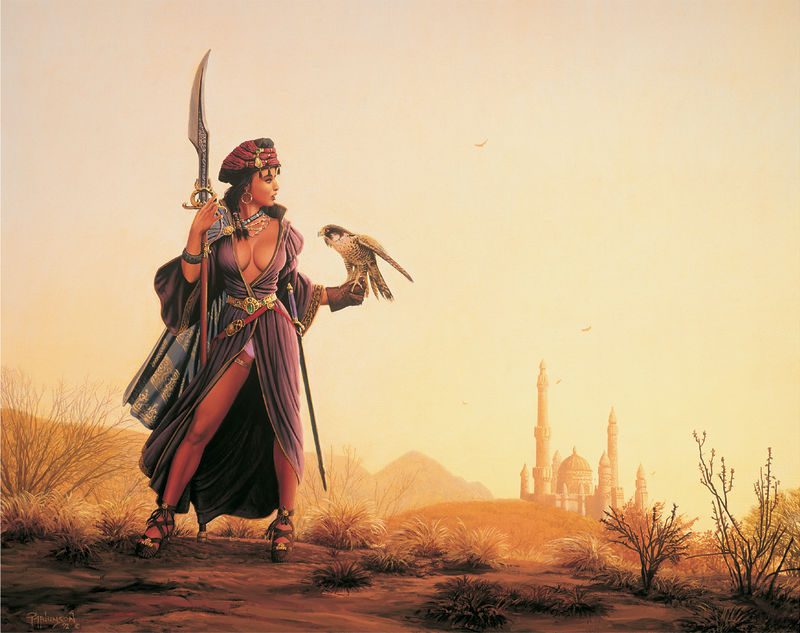 Keith Parkinson was born in West Covina, California in 1958. Due to his father’s job he had to move around a lot and lived all over the United States. During his childhood he was really into science fiction, art and playing the guitar. After graduating High School in 1976, he attended Kendall College of Art and Design in Grand Rapids, Michigan.

Upon graduating from Kendall in 1980, he worked at a company called Advertising Posters, where he worked on the artwork for pinball games and early arcade cabinets, including Krull and Tron. While working there he began to play AD&D. “The first night I played a Ranger in B1, Keep on the Borderlands, and I was hooked. We played every week.”

“I didn’t like a lot of the art I saw on D&D game products, and the company was in Lake Geneva, Wisconson, just over the border, so I drove up one day to see if I could do some freelance work. Elmore, Jeff Easley, and Tim Truman had all just joined the company, and the art they were working on was fantastic. It really blew my mind. Jim Roslof, who was the Art Director, hinted that I could join the staff full-time, but I missed the hint. A few days later, I called him about a job, and he had just hired somebody else the day before, but he’d keep me in mind. The next day, he called back, and had an opening.”

After 5 years with the company he left to work freelance.

For the next 7 years, Parkinson produced painted covers for novels written by such fantasy artists as Terry Hickman and Margaret Weis, Terry Goodkind, and Terry Brooks.

From 1995 to 2000, he designed a game called Guardians, and produced some trading cards as well as some art books.

In 2000, he produced artwork for Everquest, including the creation of the popular character, Firiona Vie, who is synonymous with this line of products.

After a long battle with leukemia, Keith Parkinson died in San Diego, California on 26 October 2005.