It was a cool February evening in Carbondale when Southern Illinois University student Arin Thompson stepped into a well-worn taxi cab.

The driver Dave was friendly enough but rather quiet. Usually that was a good trait to have in a cabbie, but in this case, it was a not what Arin needed.

Arin was writing an article on local cabbies for the school paper and was hoping for a night of wacky adventure, but as it turned out it was uneventful. 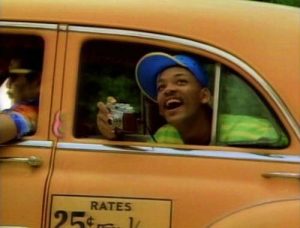 At the end of the ride, the student and cabbie shook hands, and a photo of Dave The Driver was taken. 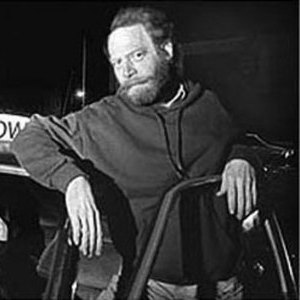 Arin published his article and that was that. Or was it?

Within a few weeks, the tabletop gaming world was abuzz. You see, the cabbie in the photo was David Trampier, a celebrated and iconic artist of early Dungeons and Dragons who had mysteriously vanished in the late 80s at the height of his career, and for 15 years was believed to be dead.

David Trampier, who often signed his work “D.A.T.” or “Tramp,” was one of the most prolific artists around the time of the First Edition. Besides the world-famous demon statue cover of the Players Handbook as seen in the title pic of this article, all the 1st ed. books contained his work, especially the Monster Manual.

My all-time fave was Emirikol The Chaotic, a mysterious magic-user (perhaps based on one of Tramp’s own characters) causing havoc on a city street: 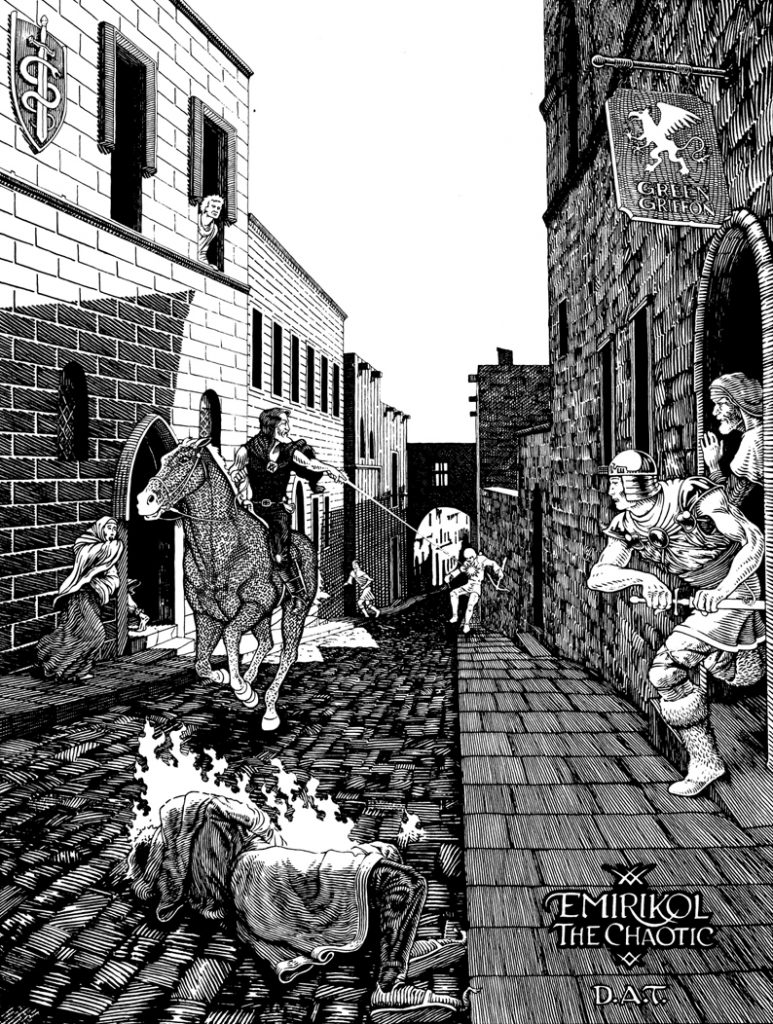 Notice anything similar about Emirikol, and the demon idol adventurers? It almost seemed like Tramp enjoyed putting himself in the roles he drew. 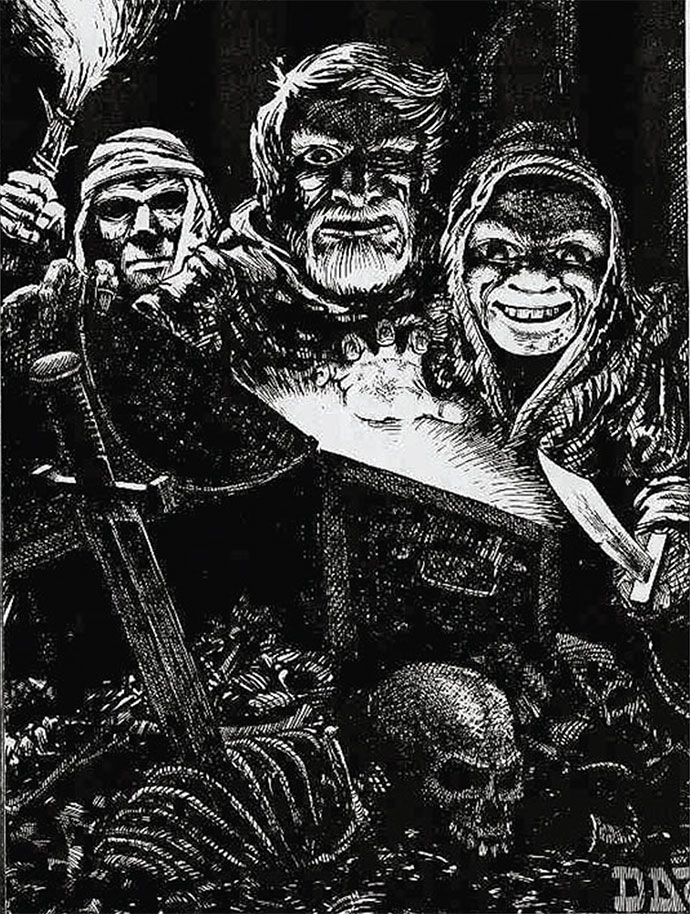 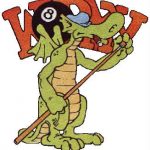 The strip focused on a cigar-chomping, snooker-loving dragon, and the rest of the inhabitants of a standard D&D dungeon.

Wormy started out fairly simple in terms of artwork, but it swiftly evolved into a lushly painted masterpiece. 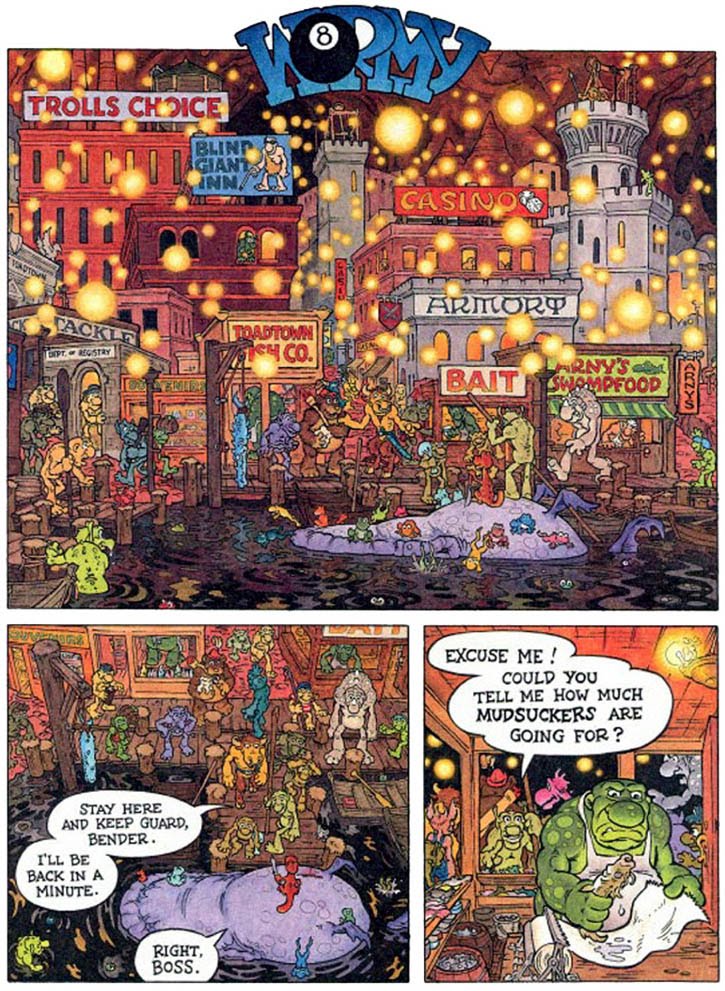 But the Wormy epic would sadly go unfinished. You can find the full run here.

Tramp had friends and family in the gaming business. He hung out at local dive bars with fellow TSR employees. But at some point in the late 80s, for whatever reason, he chucked it all and vanished.

Nobody knew what happened. Some reported that he had been acting erratically. Others say there was a blow-up of some kind at the office between Tramp and management.

But the simple fact was, he vanished and that was that.

Though Tramp’s brother-in-law stated he was still alive, checks sent to him by TSR were returned unopened. When that happens, they tend to assume the artist had passed away.

So Trampier was alive. Companies sent him work offers, and private parties offered good money for new artwork. See, by this time the Old School Renaissance of tabletop gaming was happening, and gamers old and new were rediscovering old talent.

But Tramp would have nothing of it.

He would decline all offers, politely stating that he wanted nothing to do with the gaming community. Period.

But in 2013 Trampier suffered a seriously bad run of luck. He was hit by a trifecta of his cab company going out of business, a mild stroke, and a lung cancer diagnosis.

Tramp felt he had little choice. He needed money, and there was a huge demand for his work. Things started rolling. He made a good chunk of dough selling some old original artwork. Commision offers came in.

His only stipulation was TSR have nothing to do with his return. Tramp wasn’t even aware TSR no longer existed.

An upcoming convention gig was to be his first appearance at an industry event in over 25 years, but it was not to be. Poor Tramp passed away right before his official return.

The mystery of David Trampier has only made him more popular among enthusiasts of old D&D. His often crude depictions of classic D&D monsters and characters really capture the time period; the pulp feel over the glossy artwork of later editions.

Tramp’s adventure is long over, but his legend lives on. 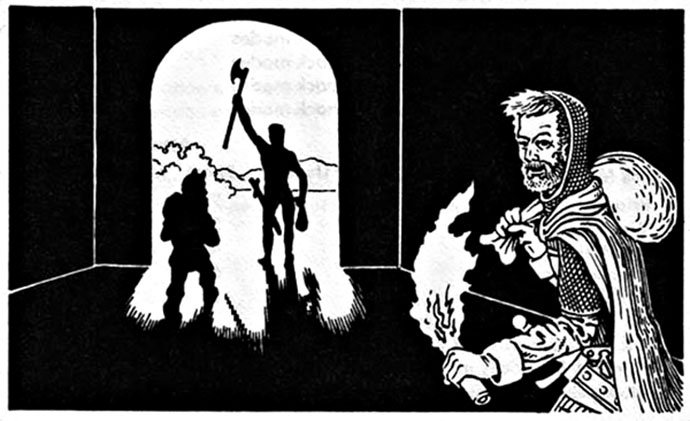