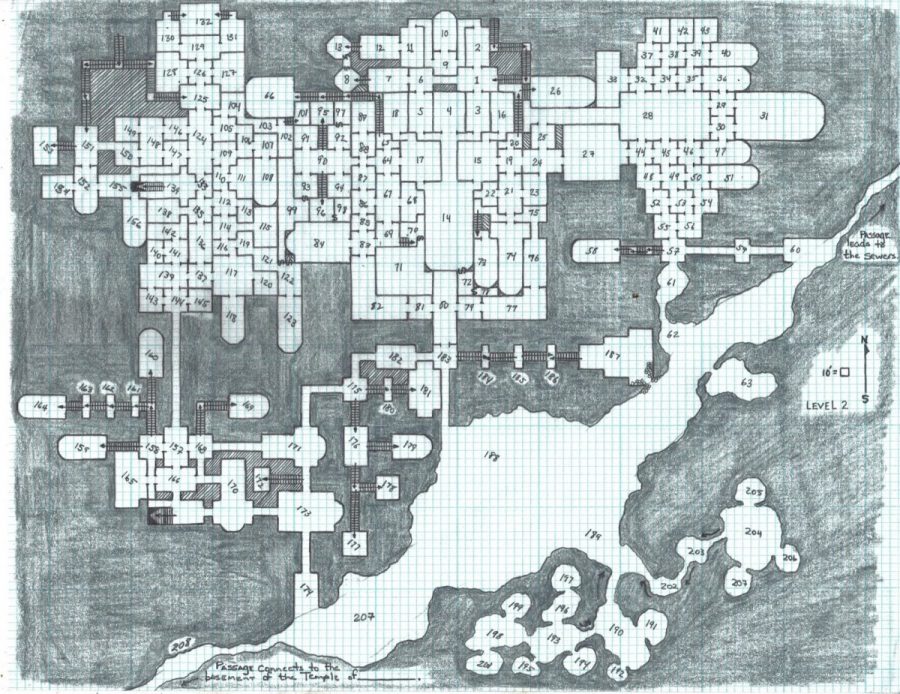 Can Gary Come Out To Play?

A couple of college-age men knocked on the front door of a modest two-story home in Lake Geneva, Wisconsin. They were nervous and a bit apprehensive, but they were also filled with a hopeful anticipation. A pretty blond woman opened the door and eyed the young men with suspicion, though she already knew why they were there.

Rolling her eyes, she called out behind her “Gary! Players!”

In his study, Gary Gygax shuffled his work papers into a pile, took a couple drags off a joint and went out to greet the men.

Smiling, he ushered them down into a large basement. 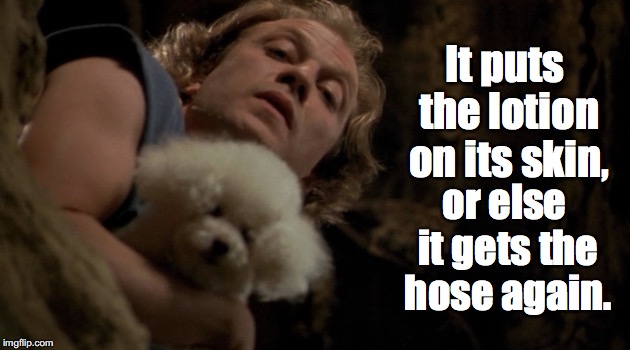 It was full of tables, one of them piled with small dunes of sand. In one corner stood a five foot, open-sectioned miniature castle, its exposed rooms and halls populated with lead minis of elves and orcs.

The young men eagerly smiled and looked at each other.

Gary handed them each several sheets of paper with pre-generated characters on them and pointed to a couple of chairs at a table laden with books and binders. “I have a couple of hours. guys, let’s start you at a town tavern down the road from Castle Greyhawk.”

The Basement King Of Lake Geneva 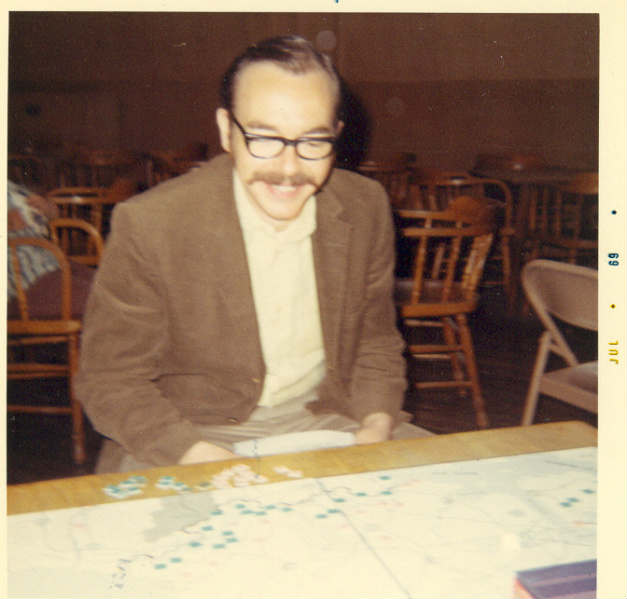 It was the late 70’s, and Dungeons And Dragons was swiftly becoming a certified phenomenon. Gary Gygax was making enough money off the game to fully indulge in his profitable hobby. He was running games for 10-20 regulars almost every night.

In addition, mostly on weekends but often any day of the week, strangers would show up at the Gygax abode, having heard he was up for DMing for anybody at a moments notice. As long as he wasn’t busy with his huge group of regulars in his closed evening campaigns.

This would not last, as eventually the growing popularity of the game, and larger and larger related projects taking up his time, would make gaming with Gary outside his regular group possible only at conventions.

See, when you get more and more famous and successful, you have less time to kick it with small groups of fans. The only thing I can personally compare it to was when I was a little kid in the late 70’s at San Diego Comic Convention International (one day to become Comic-Con), where I remember cornering Stan Lee in a hallway with several other young comic geeks, where “The Man” happily hung out for a half hour answering questions on everything from Spider-Man to Howard The Duck. From the 80’s on something like that would just not be possible.

But back to Gary.

Birth of The Megadungeon

So early on GG was running impromptu sessions for fans, and nightly for his group. How did he do it? Nowadays most modern story-crafting DMs would balk at the lack of prep time. Also, Gary would often be missing players at any particular session. How do you attend to a running narrative when the player pool shuffled so much, with little to no notice?

The answer is you didn’t. You just centered your gameplay around a megadungeon. 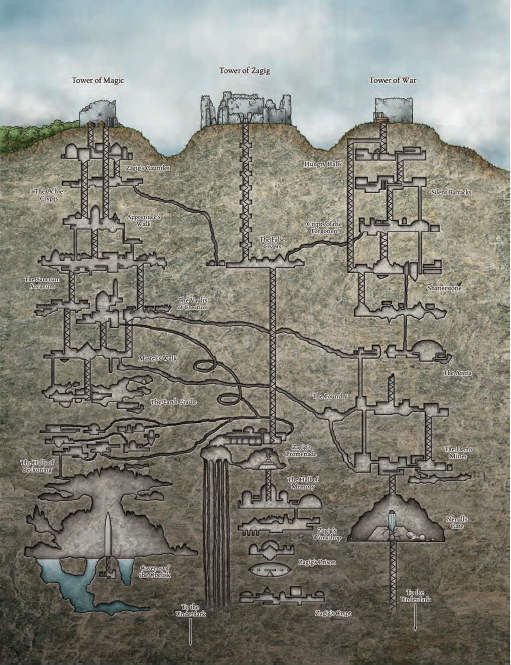 One of the hardest parts of running for a regular group is to consistently get everybody to show up regularly and constantly explaining away character absences. Getting players together for a game is like corralling cats. Jobs, family, and vacations get in the way of regular attendance.

But what about the fragile DM’s precious story? Mr. 5th Edition Dungeon Master needs to script out and craft his little stories, anticipating the players’ future actions.

Well, that was not always the case, Brosif.

With a megadungeon, there is no story (or if you must, it IS the story). All you need is the adventure location and a separate home base such as a town. The dungeon is itself the tent pole of the campaign.

It’s where you do the dirty murder hobo business of kicking in doors and killing beasties. And the tavern, inn, or whatever is where you retreated to heal, recover, and spend your blood-soaked loot.

Each session ends with the trip back to town. The next with a trip back to the dungeon. Sounds monotonous? Not in Gary’s Castle Greyhawk. Here’s a pic of his first level: 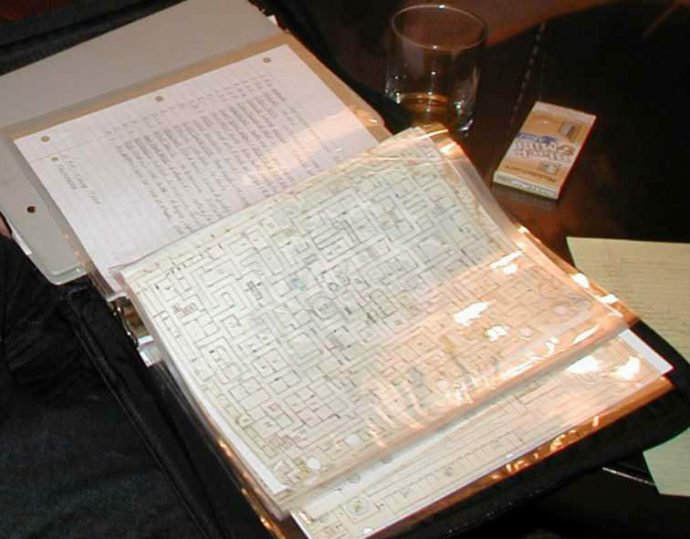 That’s a lot of rooms, right? Not only that, but most levels had sub-levels. Gary’s 12+ level Greyhawk dungeon typically had 100 rooms or more per level.

But believe it or not, Gary was a minimalist. He only wrote a sentence or two in his notes for each room, winging and randomizing elements he had not notated. When a room was explored, he would draw a line through it, and later would restock it or redesign it all together.

He could mix things up and make things as unique as he wanted.

Some rooms would be monster lairs; others might be large halls with pools filled with various magic liquids. One room might contain a dwarven forge; while the next might be an oracles chamber. Some rooms even lead to other worlds, such as Conan’s Hyperborea or John Carter’s Barsoom.

No two rooms out of hundreds would offer the same experience.

And it was perfect for groups of varying level. The megadungeon levels had many stairways and chutes to other levels, and parties could delve in relation to ability. Noob poltroons could stick to the giant rats and goblins of level one, while tougher adventurers could head to deeper levels, where the rewards matched the dangers. After an evening of ass-kicking, they headed back up and back to town till the next game. Lather, rinse, repeat.

Dungeon As An Entity

Who was restocking this dungeon? Who was coming into this deadly maze to construct rooms? The usual explanation was that some mad wizard was in charge. But that didn’t explain how monsters and undead lived literally on top of each other with little in the way of resources, waiting patiently for characters to come challenge them for the contents of locked chests.

Even as early as 1st edition, the charming batshit whimsy of colossal dungeons with no naturalism was slowly giving way to more realism, but in original D&D unrealistic “living dungeons” were heavily implied in the rules. It was baked in.

The rules for the underworld stated that in the dungeon, doors would automatically slam shut behind the characters, and were usually locked or jammed. The same doors would automatically open for monsters. No character could see in the dark, but all dungeon inhabitants, even evil humans, could see fine; that is unless they were taken prisoner or charmed by players, at which point they lost the ability.

Megadungeons were like haunted houses, they seemed to have their own agendas. An old school dungeon such as this hated player characters and loved its monsters.

This seems perhaps too whimsical and fantastic to many, but the idea of a living dungeon fits well in the madcap world of old D&D.

Online amateur D&D historian Jason Cone, also known as Philotomy, describes the verisimilitude of what he calls the “Mythic Underworld” quite eloquently:

“There is a school of thought on dungeons that says they should have been built with a distinct purpose, should ‘make sense’ as far as the inhabitants and their ecology, and shouldn’t necessarily be the centerpiece of the game (after all, the Mines of Moria were just a place to get through).

None of that need be true for a megadungeon underworld.

There might be a reason the dungeon exists, but there might not; it might simply be. It certainly can, and perhaps should be the centerpiece of the game.

As for ecology, a megadungeon should have a certain amount of verisimilitude and internal consistency, but it is an underworld: a place where the normal laws of reality may not apply and may be bent, warped, or broken.

Not merely an underground site or a lair, not sane, the underworld gnaws on the physical world like some chaotic cancer. It is inimical to men; the dungeon, itself, opposes and obstructs the adventurers brave enough to explore it.”

But as time rolled by players found such concepts as running gauntlets in super-magical labyrinths to be passe to a degree. But this was not the main reason megadungeons such as Castle Greyhawk did not become the norm in published adventures.

With minimal descriptions and a constantly shifting layout, Gygax didn’t think megadungeons would be all that usable for DM’s who did not create them. And in all honesty, I think he believed most dungeon masters, especially unseasoned ones, would be incapable of the on-the-fly decision making required for a dynamic and ever-changing location. Rather ironic now that we old schoolers see original D&D as having been more about “rulings NOT rules.”

Anybody who ran OD&D by necessity had to be adept at winging things. This is in stark contrast to the more modern editions where “player agency” seems to run the game.

But when it came time to publish adventures for the game, Gary passed on using his precious Castle Greyhawk dungeons and instead focused on ones he used for convention tournaments, such as his classic Against the Giants series. Basically, these were “railroad” adventures, more about getting from point A to point B than sandboxing. When a dungeon was involved, it was just a series of halls or caves meant to be cleared out, not a magical theme park you could delve into again and again. 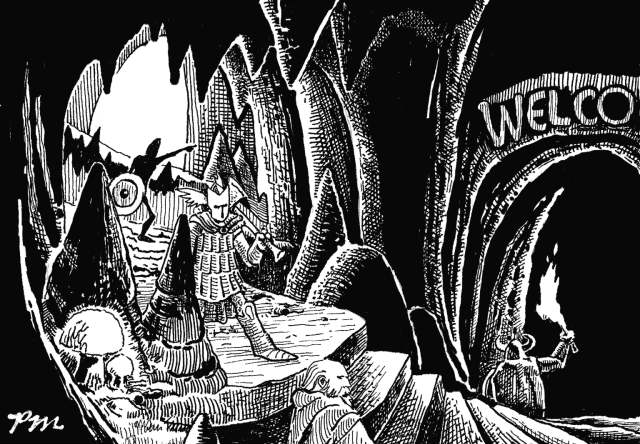 The linear adventure became the norm, and was of the type DMs would imitate for years to come. By the early 80’s, dungeons of The Mythic Underworld were becoming a lost art.

About 10 years ago or so a renewed interest in original D&D brought the megadungeon concept back into fashion among gamers old school and new.

For a somewhat outside-the-box list of megadungeons (including the Death Star) check out this article.